Features and habitat of gibbon

Mostly gibbons live in Southeast Asia. Previously, the range of their distribution was much wider, but the influence of a person significantly reduced it. 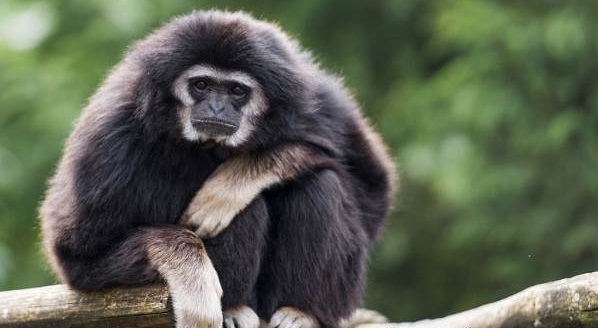 You can meet the monkey in the dense tropical forests, as well as in the thickets of trees on the mountain slopes, but not above 2,000 meters.

The features of the physical structure of representatives of the species include the absence of a tail and a greater length of the front limbs in relation to the body than in other primates.

Thanks to strong long hands and a low rooted thumb on the hands, gibbons can move between the trees at great speed, swaying on the branches.

In the photo of gibbons from the Internet, monkeys of a wide variety of colors can be found , however, this diversity is often achieved through the use of filters and effects. 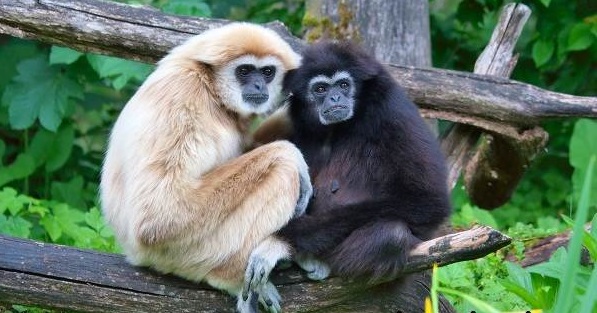 In life, there are three options colors — black, gray and brown. Dimensions depend on the individual belonging to a particular subspecies.

So, the smallest gibbon in adulthood has a height of about 45 cm with a weight of 4-5 kg, the larger subspecies reach a height of 90 cm, respectively, and the weight increases.

The nature and lifestyle of the gibbon

During daylight hours, gibbons are most active. They quickly move between trees, swaying on long forelimbs and making jumps from branch to branch up to 3 meters long.

Thus, the speed of their movement is up to 15 km / h. Monkeys rarely descend to earth.

But, if this happens, the manner of their movement is quite comical — they stand on their hind legs and walk, balancing their front.

Monogamous couples live together with their children in their own territory, which they jealously guard. 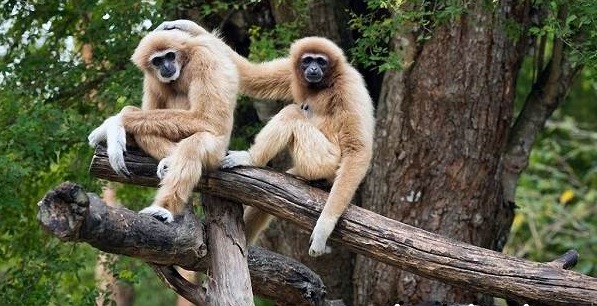 Early in the morning, the monkey gibbons climb the tallest tree and notify all other primates with a loud song that this square is occupied.

There are instances that for certain reasons do not have territory and families.

Most often these are young males who leave parental care in search of their companions.

An interesting fact is that if a grown up young male does not leave parental territory on his own, he is expelled by force.

Thus, a young male can wander through the forest for several years until he meets his chosen one, only then they together occupy an empty area and raise offspring there.

It is noteworthy that the adults of some subspecies occupy and protect the territory for their future offspring, where the young male can lead the female for a further, already own, independent life. 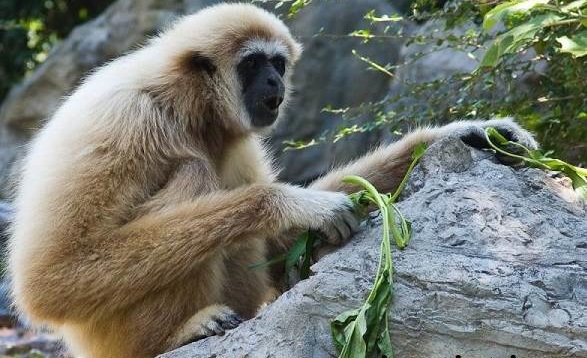 On the photo white gibbon

There is information about the strict daily routine among the white-faced gibbons , followed by almost all monkeys without exception.

At dawn, in the interval between 5-6 hours in the morning, monkeys wake up and move away from sleep.

Immediately after the ascent, the primate goes to the highest point of his locality in order to remind everyone else that the territory is occupied and should not be thrown here.

Only then the gibbon makes the morning toilet, puts itself in order after sleep, begins to make active movements and sets off along the branches of the trees.

This path usually leads to a fruit tree already chosen by the monkey, on which the primate eats breakfast with pleasure.

Eating is done slowly, gibbon relishes every piece of juicy fruit. Then, at a slower pace, the primate goes to one of his resting places in order to relax. 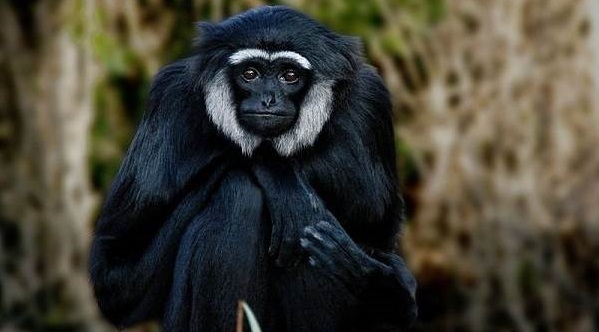 On the photo is a black gibbon.

There he basks in the nest, lying practically motionless, enjoying satiety, warmth and life in general.

Having had a good rest, the gibbon is engaged in the purity of its wool, combing it out, slowly brings it in order in order to proceed to the next meal.

At the same time, dinner is already taking place on another tree — why eat the same thing if you live in a tropical forest? Primates are well aware of their own territory and its hot spots.

The next couple of hours the monkey again relishes the juicy fruits, fills the stomach and, heavy, goes to the place of sleep. 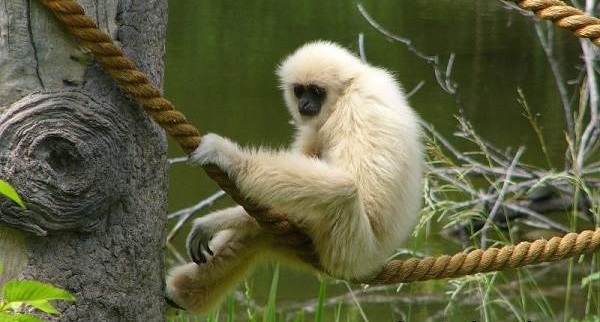 As a rule, daytime rest and two meals take up the whole day of the gibbon, having reached the nest, he goes to bed, so that tomorrow with new forces he will inform the district that the territory is occupied by a fearless and strong primate.

The main food products of the gibbon are juicy fruits, shoots and leaves of trees.

However, some gibbons do not disdain insects, eggs of birds nesting in their trees, and even chicks.

Primates carefully examine their territory and know at what point it is possible to find a particular fruit.

Reproduction and life expectancy of gibbon

As mentioned above, gibbons make up monogamous couples in which parents live with their offspring until the young are ready to create their own families. 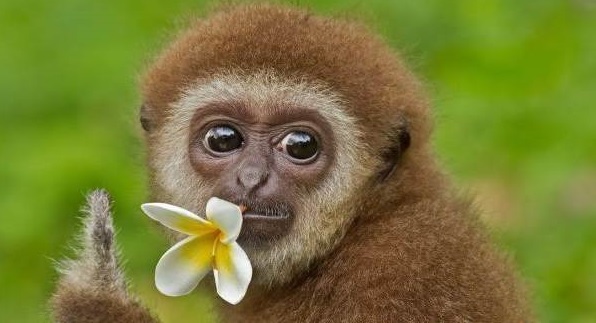 Given the fact that puberty comes to primates at 6-10 years of age, the family usually consists of children of different ages and parents.

Sometimes they are joined by old primates, who for some reason are left alone.

Most gibbons, having lost a partner, can no longer find a new one, so they spend the rest of their lives without a pair. Sometimes this is quite a long period, since gibbons live up to 25-30 years.

Representatives of the same community know each other, sleep together and eat, care for each other.

Grown up primates help the mother to keep track of the babies. Also, by the example of adults, kids learn the right behavior.

A new cub appears in a couple every 2-3 years. Immediately after birth, he wraps his long arms around Mama’s waist and holds her tightly. 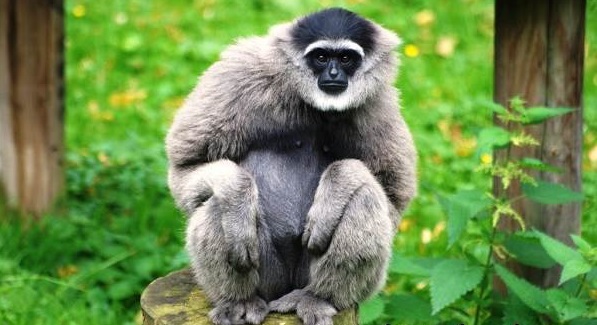 In the photo belshcheky gibbon

This is not surprising, because even with the baby in her arms, the female moves in the same way — she swings strongly and jumps from branch to branch at a huge height.

The male also takes care of the young, but often this concern is only in the protection and preservation of the territory.

Despite the fact that live gibbons in forests full of violent predators, the most harm to these animals was caused by people.

The number of primates is significantly reduced due to a decrease in the area of ​​habitat habitats.

Forests are cut down and gibbons have to leave their territories in search of new ones, which is not so easy to do.

In addition, in recent times there has been a tendency to keep these wild animals at home.

Buy gibbon can be in specialized nurseries. The price for a gibbon varies depending on the age and subspecies of the individual.