Features and habitat of giraffe

One of the most famous and favorite animals is the giraffe. It is interesting that even those who have never seen him alive love him. And you should definitely look at it, at least once in your life. 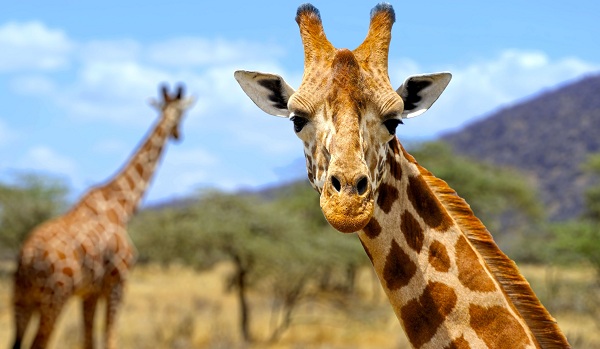 This is an incredibly graceful animal, elegant and graceful. However, it only seems so at first glance. In fact, the giraffe is just huge, because its growth reaches 6 meters, it is the tallest animal. And such an animal weighs under a ton, and it happens that more. Females are usually smaller.

Of course, the unusual nature of this animal giraffe family lies primarily in its extraordinary neck. In comparison with the body, it is simply incredibly long.

But meanwhile, it has only 7 cervical vertebrae, like any other animal that has a normal or even very short neck. But the neck muscles of a giraffe are very powerful. They are able not only to hold the head of this animal high above, but also allow a large, heavy neck to make any manipulations. 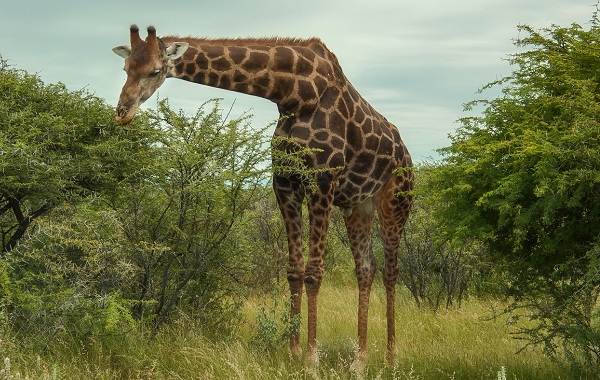 This animal has a very strong and large heart weighing 12 kg. The work of this body is not simple, because it is necessary to pump blood to the brain and disperse throughout the body, and since the brain is far above, it is very important for the giraffe to maintain the necessary pressure, it is three times higher in this animal than in an ordinary person.

With such pressure, the animal could have died with a sharp lowering of the head or raising — too much overload. But nature has made the blood of a giraffe very thick and dense, and also, the animal’s veins are equipped with valves that control the flow of blood.

The language of giraffes is also unusual. It is too dark in color, and can be put out almost half a meter. This is necessary for the animal in order to cling to the branches of trees that grow especially high. 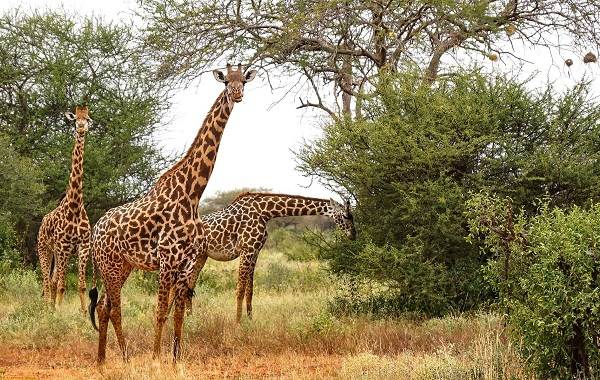 On the head are large eyes with thick eyelashes, giraffes have excellent eyesight. He is able to notice other giraffes at a distance of a kilometer. Ears are not large, although hearing is excellent.

On the smell, too, do not complain, it is well developed in a giraffe. On the head there are horns covered with wool. Sometimes you can find a giraffe with two pairs of horns. And some individuals also have a horn — in the middle of the forehead, although, as a matter of fact, it is a bone growth that is not a horn.

The legs of these animals are long and thin. Due to the fact that they have to carry too much weight, giraffes can only move on a solid and dense surface.

Therefore, swamps, and even more so, rivers, giraffes can not tolerate. They prefer to move slowly, smoothly, without sudden movements. However, you should not think about this animal at all, as about a lump. The giraffe, if necessary, is able to run at a speed of 55 km / h and make high jumps of more than 1, 8 meters. 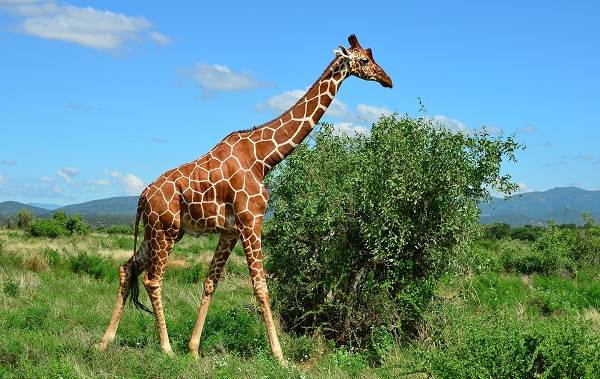 The strong body of the animal is covered with uniform, short hair, which has a peculiar color. On a lighter background there are spots of various shapes and in a chaotic order. The shape and location of the spots is individual, just like the fingerprints on a person’s hand.

But all giraffes have no abdominal spots. These amazing animals live only in Africa. Especially they are comfortable in the savannas, which are located in the south and east of Africa, below the Sahara desert.

However, even though the real animal world of a giraffe is comfortable for its living, the numbers are constantly falling. In order to preserve the population, special reserves are created, reserves, protected areas, where they preserve the peace of these animals, allowing them to multiply and live a long life in natural conditions. 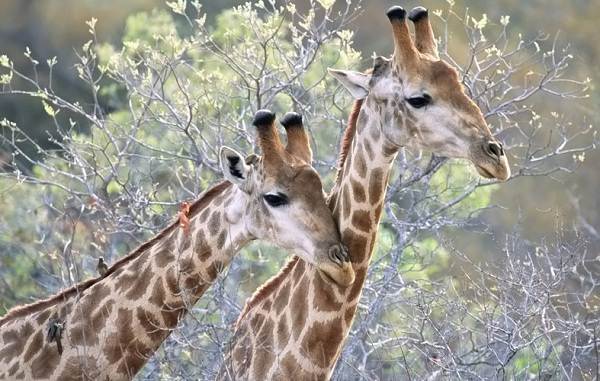 But the giraffe is an animal that people want to see alive, and not just in the photo. Therefore, many zoos have at their disposal these magnificent animals. In captivity, individuals breed very well, quickly get used to new conditions, and live without inconvenience.

The nature and lifestyle of the giraffe

Giraffes rarely live alone. Most often they gather in small groups that are difficult to call herds. Females, for example, can gather in groups of 4 to 30 heads. In this case, the composition of the group may constantly change.

And even in such groups they are not too attached to each other. It is enough for an animal to know that its brothers graze next to it, and it is not necessary to contact them.

Moreover, these whores have few enemies, so there is no need to rally into a strong, reliable herd. Although when moving in search of food, giraffes may join other herds, such as antelope.

In such herds it is easier for mothers to defend themselves from lions or hyenas, which rarely attack adult animals, but they are hunting for babies. But after the right place is found, the proud people leave satellites — antelope. 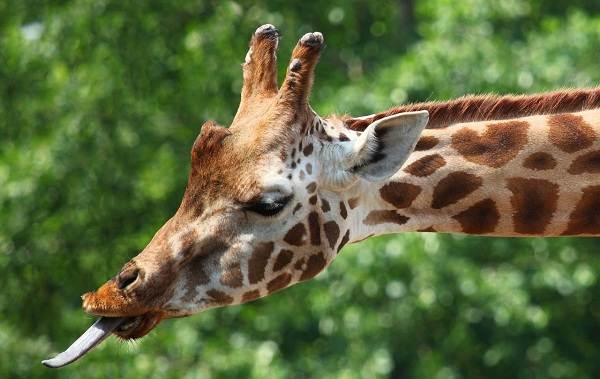 Their battles are to hit their heads in the neck of the enemy. Usually, great cruelty is not observed, but in the mating season, the males become more aggressive.

But even then they do not use kicks, which are considered the most dangerous and are used only for protection against predators. It is known that such a blow can easily split the skull of the enemy.

But giraffes belong to their brethren peacefully. In addition, the male, who was defeated, can safely remain in the herd further, no one expels him, as other animals do.

It is believed that giraffes do not utter sounds at all. This is not true. These animals have a voice, but it is much lower than the frequencies that the human ear can distinguish. 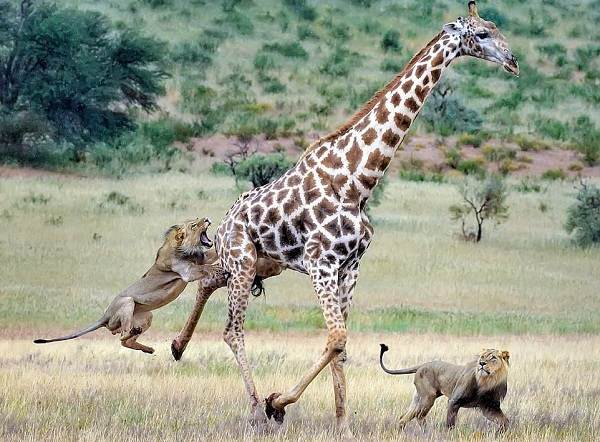 Giraffes have another amazing property — they sleep less than any animal. They do not sleep more than two hours a day, and this is enough for them. They can sleep while standing, or they can lie with their heads on their torso.

The giraffe is an artiodactyl, an exclusively herbivore. They are ruminants, the same as cows, and chew food several times, because the stomach to them is four-chamber.

The main diet of the animal are the leaves of trees and shrubs. Most gourmets prefer acacia. Males choose the highest branches, while they even more stretch the neck and seem even more majestic.

Females do not tend to visually increase their growth, they are satisfied with the vegetation, which is located at the level of their torso. The animals immediately seize the entire branch with the tongue and pull it into the mouth, tearing off all the leaves. In order to feed themselves, giraffes eat up to 20 hours a day, because they need at least 30 kg. 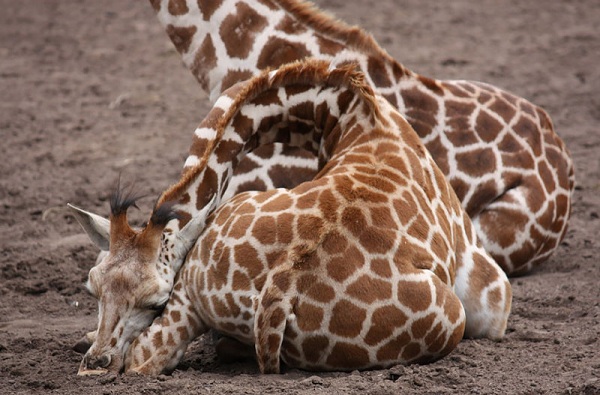 The food eaten is so rich in juices that the giraffe has a very small need for water. For weeks, or even months, this large animal can go without drinking. When the giraffe drinks, it can immediately drink about 40 liters.

This amount of water at the top does not exist, so when drinking the animal is forced to bend its neck very low, and to set its front legs wide apart. This is the most uncomfortable and vulnerable posture, precisely in this position, the giraffe is clumsy and clumsy.

Therefore, he starts drinking only in full confidence that there is no danger nearby. By the way, this is why giraffes do not like to pinch grass.

The mating season and the mating itself falls on the rainy season. But the birth itself, most often, occurs from May to August, that is, in the months of drought. The pregnancy of the female giraffe lasts more than a year, 457 days, but the baby is born already about 2 meters tall. The female brings one cub, rarely, but can be born and twins. 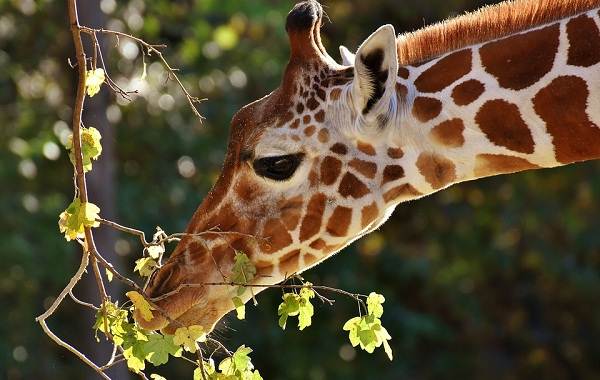 Within 15 minutes after birth, the baby rises on its feet and begins to feed on mother’s milk. At this time, they are completely defenseless, so they are forced to hide for the entire first week after birth.

Interestingly, after 3-4 weeks of birth, giraffes begin to leave their young, leaving them in the care of other adult females. A mother can go 200 meters from the herd, and return only in the evening to feed the baby.

This continues until the cubs can accompany the mother. Toddlers grow up quickly, but they will be with the female for 12-16 months. True, young males are separated from their mother at 12-14 months of age.

They begin to live alone until they become strong, sexually mature males. And sexual maturity in males comes to 4-5 years. However, giraffes start mating only after they turn 7 years old. 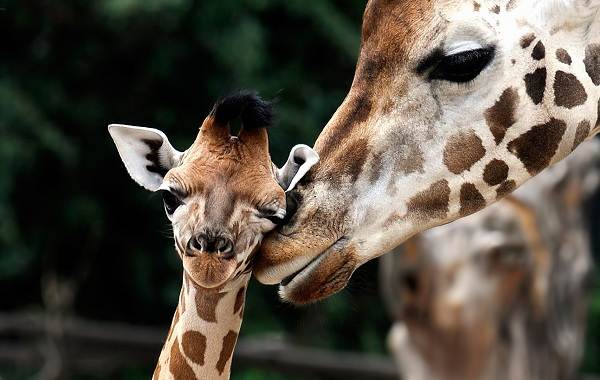 The females, more often, remain in the herd. They become sexually mature in 3-4 years, however, they become mothers in no hurry for at least a year. These interesting animals live in the wild to 25 years. Even in captivity, in specially created conditions, under the supervision of veterinarians, the life expectancy of these beauties did not exceed a record level of 28 years.