Wonders of the animal world inexhaustible. The more accessible the area, the more exotic the inhabitants inhabiting it. From above it is ordinary, and from below transparent as glass, tailless amphibian, lives in tropical zones of South America. 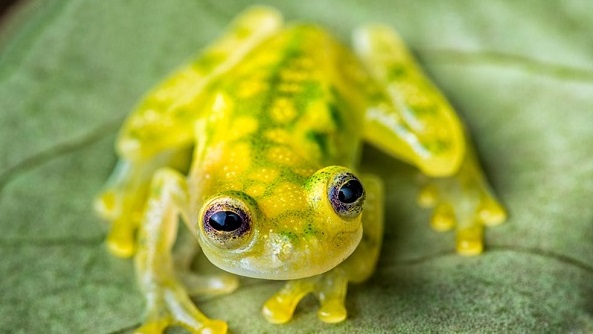 Features and habitat of the glass frog

The banks of rivers and rivulets, which flow among highly moist forests, is a favorite place for its settlements. The creature itself, as from glass, through the skin looks through the insides, eggs.

Most amphibians have a “glassy” abdomen, but they are found with transparent skin on the back or fully translucent paws. Sometimes the limbs are decorated with the likeness of a fringe.

Small, no larger than 3 cm in length, light green, bluish color with multi-colored specks, with unusual eyes, such a description and photo of a glass frog . 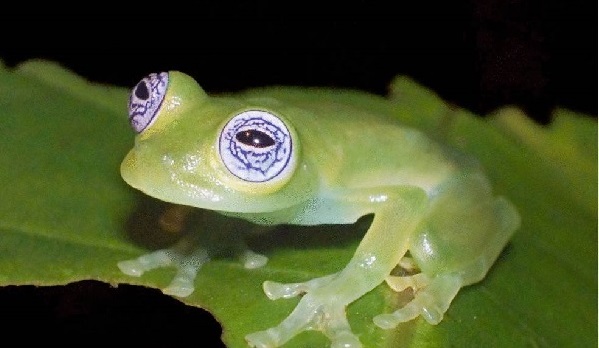 On the photo is a glass frog

Unlike a wood amphibian, its eyes are not looking at the sides, but forward, so the view is directed at an angle of 45 °, which allows you to accurately track down the fine afterlife. There is a specific cartilage on the heel.

Ecuadorian amphibian subspecies (Centrolene) have large parameters up to 7 cm. They have a white abdominal plate, green bones. The humerus contains a hooked outgrowth. The tentative appointment of a spike is a weapon when sparring over a territory or the opposite sex.

The nature and lifestyle of the glass frog

It was in Ecuador at the end of the 19th century that the first specimens were found, and by the end of the 20th century such amphibians were divided into 2 genera. The last distinguished 3rd genus of the netted glass frog (Hyalinobatrachium) is characterized by the presence of a white bone, the absence of a light strip, which in the rest of the “relatives” covers the view of the heart, intestines, and liver.

These internal organs are clearly visible. The main part of the life of all frogs flows on land. Some prefer to settle in the trees, choosing a mountainous landscape. But procreation is possible only near watercourses. 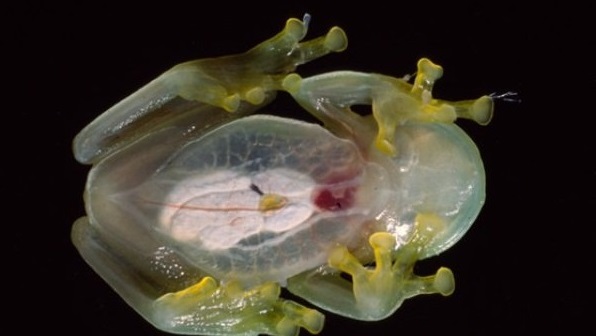 Having a nocturnal lifestyle, during the day they rest on a wet bedding. Amphibious Hyalinobatrachium prefer to hunt during the day. Interesting facts of the glass frog are the behavioral patterns among opposite sexes, the distribution of roles during egg laying.

Males guard their first few hours of life, then periodically inspect. «Net fathers» protect clutch from dehydration or insects longer (all day). There is a theory that in the future they also take care of maturing young. Females of all species disappear in an unknown direction after spawning.

Among the names of the amphibian there is a Venezuelan glass frog, given to it on a territorial basis. Like all «transparent» amphibians, it is insatiable, loves to feast on small soft-bodied arthropods, flies , mosquitoes . 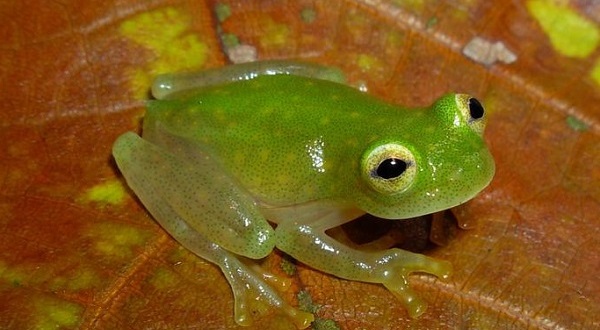 At the sight of a potential victim, opens his mouth, attacks him from a distance of several centimeters. Stormy weather allows you to get food not only in the evening, but also during daytime hours. Under unnatural living conditions, Drosophila flies are suitable for feeding .

It is very difficult to buy a glass frog , although there are scientific centers for the study of these unusual animals, there are a few amphibians who contain them. The requirements for captive breeding are complex, and special high aquaterrariums with a balanced ecosystem will be needed.

Reproduction and life expectancy of the glass frog

The period of reproduction comes only during the wet season. The male, eliminating rivals with a threatening squeak or attack, begins courting a female. What are the only trills, he does not lead, then whistling, then abruptly short. 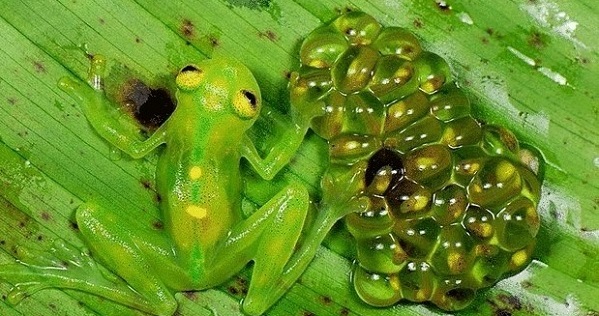 In the photo glass frog with its caviar

Sometimes there are photos of a glass frog, where individuals seem to ride each other. Such a pairing is called amplexus, with his partner clasps the female with his paws, does not release for seconds or hours.

Eggs are deposited thoughtfully on the inner plate of a leaf of plants growing above water. Birds do not see them, aquatic creatures do not reach. After the ripening of the eggs, tadpoles appear, which immediately fall into the water element, where danger awaits them.

The duration of life and mortality of amphibians are not fully understood. There is no exact method for determining the age of animals living in their natural environment. But scientists say that in nature their life is much shorter. The facts of residing on the reservation have been preserved: 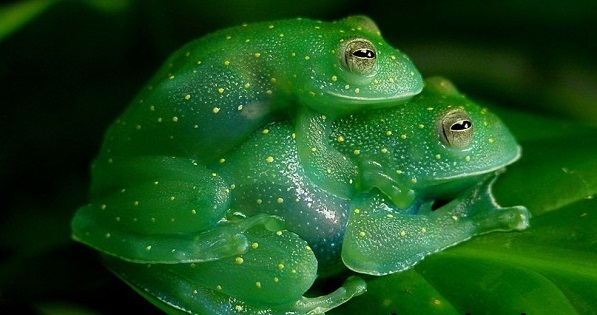 Hardly anyone of the kind of frogs Centrolenidae prepared such a long time. In addition to environmental problems and the threat of deforestation, there is a high probability of pesticides leaking into the aquatic environment where young tadpoles live. They are food for fish and other representatives of the fauna, so the “transparent” amphibians may well disappear from the animal world.