At the mention of Goliath, most people remember the biblical story from the Old Testament, when the great Philistine warrior was slain by the future king of Judea David. 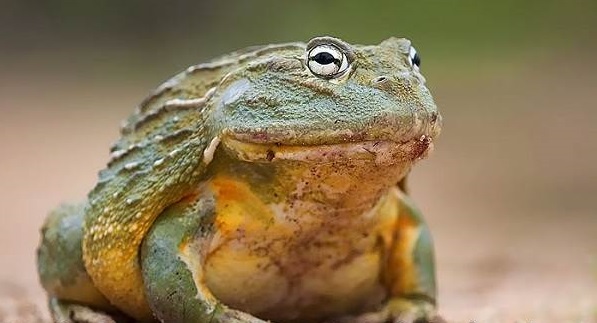 This fight ended in one of the most shameful defeats in the history of mankind. However, Goliath, not only a character from the Bible, is the name of the world’s largest frog .

Features and habitat of the Goliath frog

If the goliath frog appeared in the Russian folk tale of Vasilis the Wise , it would hardly have liked Ivan Tsarevich. Such a frog princess, instead of a slim beauty, would probably turn into a weightlifting athlete.

At times, the goliath frog can sometimes grow up to 32 cm and weigh more than 3 kg. If you do not pay attention to the gigantic size, the appearance of the goliath frog resembles the usual lake frog. Her body is covered with bumpy skin of marsh color. The back of the legs and belly are light yellow, and the chin area is milky. 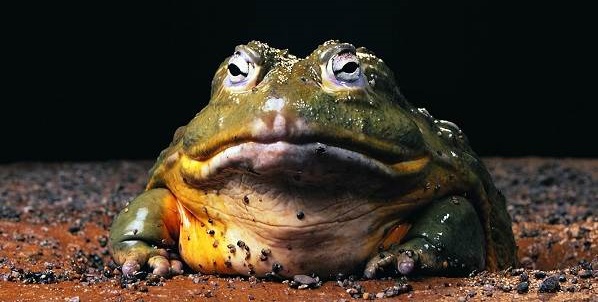 Many are probably interested in the question, how can such a hero croak, maybe with a bass sound? But no, the goliath frog is naturally silent because it does not have a resonant bag. This species was discovered by scientists relatively recently — at the beginning of the last century.

Habitats habitual to her are Equatorial Guinea and southwest Cameroon. In the local dialect, the name of this frog sounds like “nia moa”, which translates as “sons”, because adults sometimes grow to the size of a newborn baby.

Unlike many of its own kind, the Goliath frog cannot live in muddy and muddy swamp water, but prefers clean, oxygen-rich waters of fast rivers and streams. 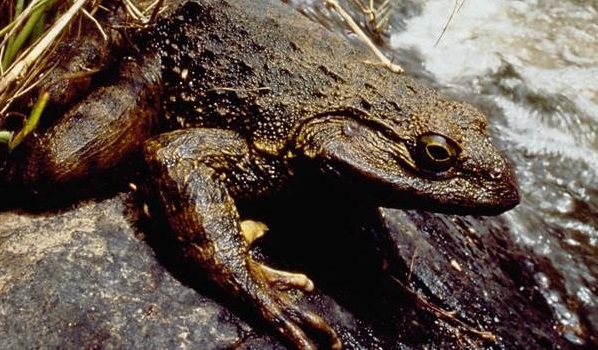 The goliath frog lives in shady and humid places, avoiding bright sunlight, in close proximity to water. It is very sensitive to temperature fluctuations and feels comfortable at 22 ° C, this is an average figure in its natural habitat.

They tried to keep this capricious giant in the conditions of zoos, but all attempts were in vain. So for an ordinary person, a video and photo of a goliath frog is the only way to see these amazing creatures of the animal kingdom.

The nature and lifestyle of the frog goliath

The behavior of the largest frog on the planet is not so easy to learn. Leading experts in batrahiology, studying the African goliath frog , found that this amphibian leads a quiet life, spending most of its wakefulness on the rocky outcrops forming waterfalls, with virtually no movements. It is difficult to notice and easily confused with stones wet from splashes. 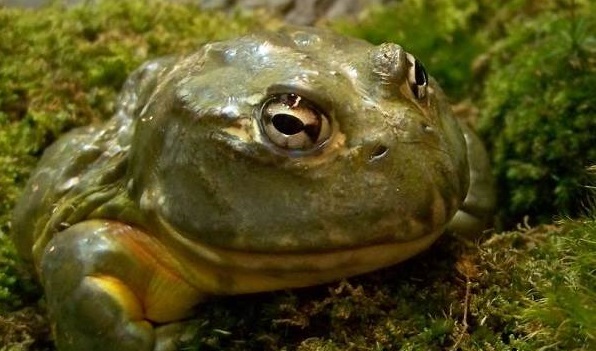 To firmly hold on to slippery and wet stones, the goliath has special suckers at the tips of the toes of the front paws. The hind limbs are equipped with membranes between the fingers, which also helps to maintain a stable sitting position.

At the slightest danger, in one long leap it rushes into a raging stream and can be under water for up to 15 minutes. Then, hoping to avoid trouble, eyes first appear on the surface, and then the goliath’s flat head.

Making sure that everything is in order, the frog goes to the shore, where it takes a head-to-water position, so that the next time, at the sight of a threat, it will also quickly fly into the water.

With its gigantic size and seeming clumsiness, the goliath frog can jump 3 meters ahead. What a record you will not set for the sake of saving your own life. 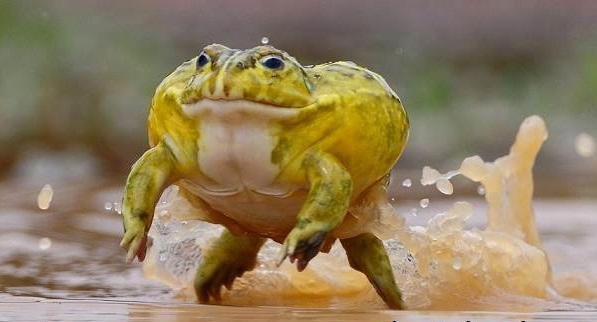 The energy expended by amphibians on this jump is enormous, after which the goliath takes a long time to rest and recuperate. Goliath frogs are distinguished by secrecy and caution, they perfectly see at a distance of more than 40 m.

In search of food, the frog Goliath advances with the onset of darkness. Its diet consists of various types of beetles , dragonflies , locust and other insects . In addition, goliaths feed on small amphibians, rodents, crustaceans, worms , fish , and scorpions .

Naturalists were able to observe how the goliath frog is hunting. She makes a rapid leap and crushes the victim with her by no means small body. Further, like its small brothers, the frog grabs the prey, squeezes the jaws and swallows whole. 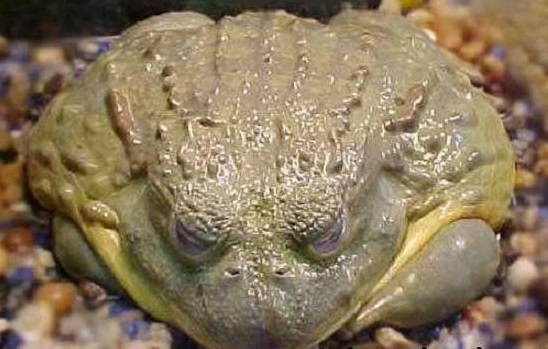 Reproduction and lifespan of the Goliath frog

An interesting fact is that the goliath male frog is much larger than the female; this is rare for amphibians. During the dry season (July-August), the future father builds something like a semicircular nest of small pebbles. The place is chosen away from the rapids, where the water is calmer.

After the ritual fights for the attention of the partner, the frogs mate, and the female throws several thousand eggs the size of a pea. Caviar is glued to the stones overgrown with small algae, and on this the care of the offspring ends.

The process of turning eggs into tadpoles takes just over 3 months. The newborn goliath tadpole is completely independent. Its diet is different from the nutrition of adults and consists of plant foods (algae). 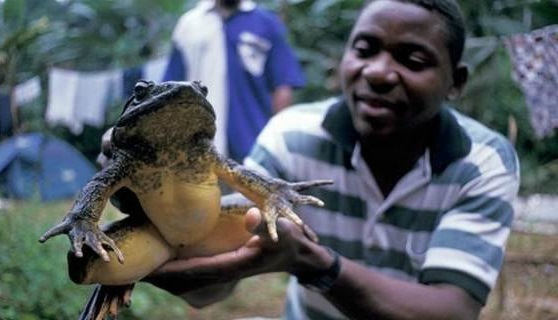 After a month and a half, the tadpole reaches its maximum size of 4.5-5 cm, then its tail falls off. Over time, when the tadpole grows and its legs get stronger, it gets out of the water and switches to adult nutrition.

Living on Earth before the era of the dinosaurs, more than 250 million years old, the largest frog goliath today is on the verge of extinction. And as usual, the reason for this was people.

The meat of such a frog in the indigenous population of Equatorial Africa is considered a delicacy, especially the front limbs. Although there is a ban on hunting, some Africans, despite everything, catch these giant amphibians and sell them to the best restaurants.

Scientists have noticed a tendency that the size of goliath frogs shrinks from year to year. This is explained by the fact that large specimens are easier and more profitable to catch than small fry. Nature, however, adapts her creation to the harsh new conditions of life, goliath shallows to become more inconspicuous.

The goliath frog is threatened with extinction due to man, and many African tribes, such as the Pygmies and Fangs, do not hunt them. The worst thing is that irreparable harm is done from civilized countries, from tourists, gourmets and collectors. Deforestation of tropical forests annually reduces their habitat by thousands of hectares.