There are many feature films in which huge fictional monkeys take the lead. To meet the real King Kong somewhere is simply impossible because he really does not exist. But to see in nature or in some zoo of its prototype is still possible. 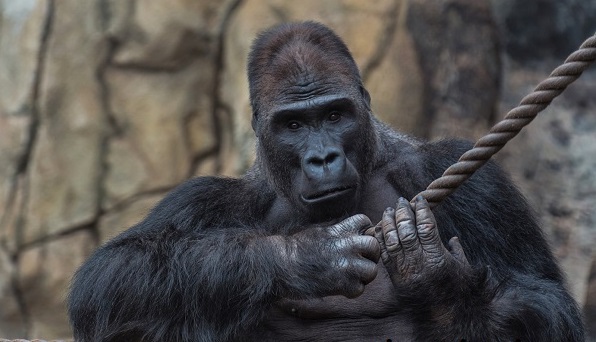 What monkeys are considered the largest in the world? Gorilla monkey is the largest representative of primates. They have too much resemblance to a person . The structure and even some habits of these animals very much resemble human ones. For the first time, people learned about them from the description of Thomas Sevghemiz, a missionary from America.

Features and habitat of the gorilla

In real life, the parameters of the great ape gorilla are much less than in science fiction films about it. The average height of this interesting animal is about two meters, and the weight sometimes reaches 270 kg. Males are always twice as large as females. Their broad back is most striking. The width of the shoulders of the male reaches one meter.

The whole body in the photo of a gorilla monkey with the naked eye can see incredible strength and power. It is massive, has well-developed muscles, strong hands and powerful feet. 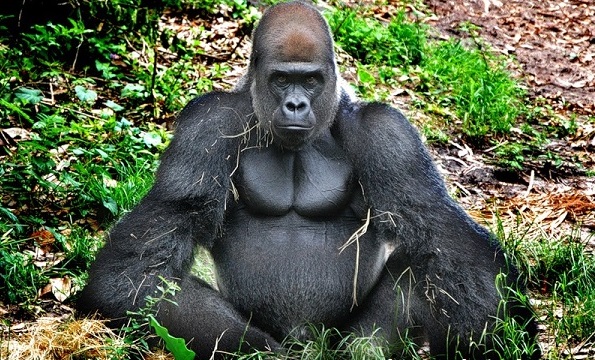 The coat color of dark-colored gorillas, adult males still have a silver band running through their back. Brow ridges of the gorilla prominently come forward.

The forelimbs are much longer than the hind ones. This animal can easily move on the hind limbs, but still prefers to walk on all fours. The gorillas walk, leaning on the fingers of the back side, therefore the inner side of the animal’s rods is quite sensitive.

There is a low forehead and a massive jaw on the big head of the animal. The brain volume of a gorilla is about 600 cubic centimeters. The animal has 48 chromosomes. 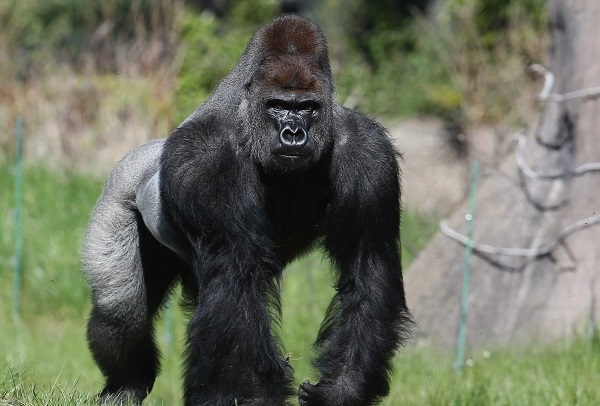 Gorillas are divided into two species. Those who live in the plains of the humid forests of Gabon, Cameroon and the Congo are called plain gorillas.

Those who live in the central regions of Africa in the mountains of Virunga are called mountainous. Mountain gorillas differ from the plains in long hair, which they need in order to protect animals from fierce mountain frosts.

The nature and lifestyle of the gorilla

Gorilla monkey inhabits groups of 5-30 individuals. The leader in such a group is the leader, there are a couple more males, females and babies. Gorillas are the most frightening forest dwellers, so they have no special enemies and enemies. 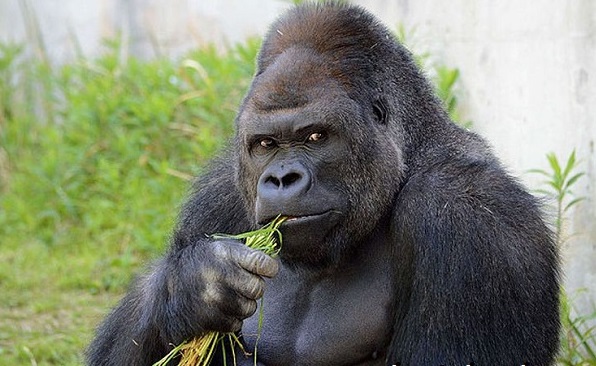 Their food grows everywhere in the woods, so they do not need to spend a lot of time looking for food. In the morning, primates prefer to sleep. After awakening, the animals stroll through the tropics and rest.

For most gorillas, rest lies in a dream, small primates play among themselves, while other animals search for insects in each other’s fur .

Afterwards, they again walk through the jungle, in parallel with taking food. This activity continues with them until dusk. Closer to the night, the leader of the group begins to build a nest from the branches. 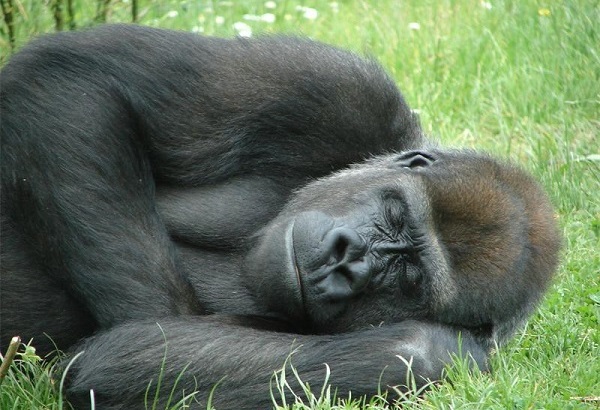 Because of its large weight, the leader often has to sleep on the ground

As a rule, it is always on the ground because the leader usually has a large mass. Other members of the friendly group climb the trees and, having built their nests there, fall asleep in places where they are caught in the night.

It is quite comfortable and natural for these social animals to be in a group. Gorillas do not like water and try to avoid them. They are not happy also rainy weather.

Although the gorilla’s appearance is awesome, these animals are in fact good-natured and peace-loving if you do not conflict with it. Their leader can perform an awesome dance in order to strengthen his authority and protect the group from the enemy, but this threat does not come further than the dance.

Even, having raged, the monkey most often refrains from attacking a person. If this happens, then these are small, insignificant bites. 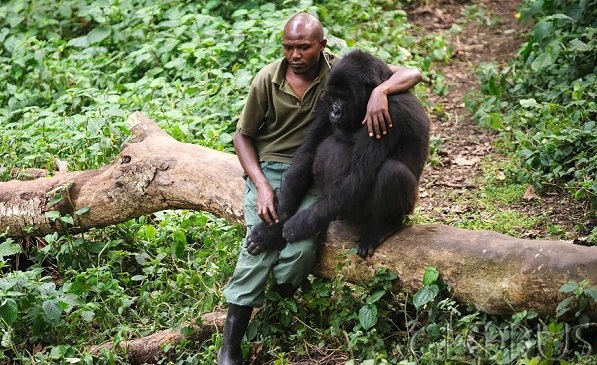 Gorillas have a friendly character

In the group, the gorillas are mostly calm. Scandals occasionally occur between females, which quickly cease after small verbal exchanges.

The leader at this time does not interfere in the quarrel between the «ladies», and modestly watching all this from the side. Communication between all members of the group occurs at the level of the signal system, which consists of facial expressions and sounds.

The biggest primates are vegetarians. The main food of the gorillas are products of plant origin. In the intervals between play and rest, the gorilla monkey eats celery, nettles, morning planks, bamboo shoots and pygeum fruits.

Dilute their main diet with nuts and fruits. Gorillas have very strong jaws, they easily chew on tree roots, branches and wood. Sometimes insects can get into food, extremely rarely. 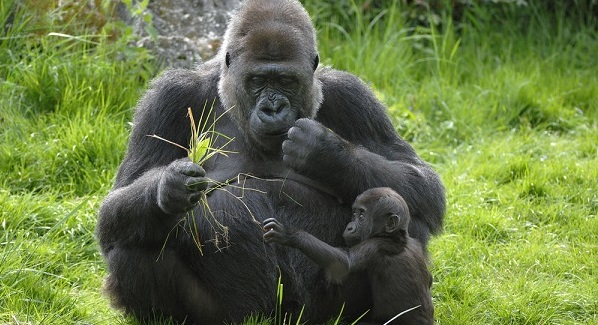 The lack of salt in the body of the gorilla is compensated by some types of clay. The size of the animals does not allow them to eat on the tree, for this they descend to the ground.

For a long time, monkeys can survive without water, because in the greenery, which they consume enough moisture. In order to feel good the gorillas have to absorb a lot of food. In essence, their whole day consists of the fact that they get their own food, absorb it and sleep.

Reproduction and life expectancy of the gorilla

The child-bearing age in female gorillas begins at 10 years, and in males from 15-20 years. Childbirth occurs about once every four years. Pregnancy lasts 250-270 days. A small baby weighing 1.5 is born. 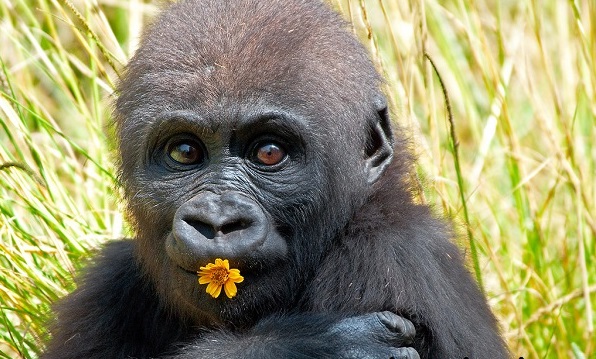 On the photo baby gorilla

He is absolutely helpless, unable to even crawl. Up to 8 months, he eats only mother’s milk. Sometimes breastfeeding is delayed up to 3 years. For a long time, children are close to their parents. Gorillas live in nature until about 40 years old. In captivity for ten years longer.