Crowned pigeon — a real decoration of any dovecot. Fans of these beautiful birds strive to purchase at least one copy in their nursery. Distinguished by special beauty, you can admire their magnificence for hours. The photo of a crowned pigeon is always located on the places of honor of any gallery in the world, because they are considered an endangered species. 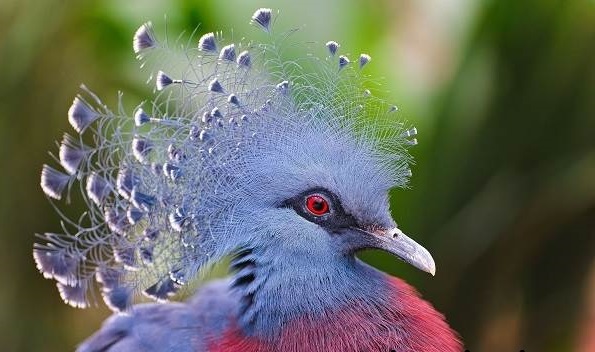 Features and habitat of the crowned pigeon

Crowned pigeon belongs to the order of pigeons, has three distinctive species. Outwardly, they are all similar, differing only in habitats. The first descriptions were made by James Francis Stevens in 1819.

When a series of studies was carried out, it turned out that the bird has more ancient ancestors than ordinary pigeons. After analyzing their DNA, scientists came to the conclusion that part of genetics belongs to the extinct species of «dront» and «desert hermit.» 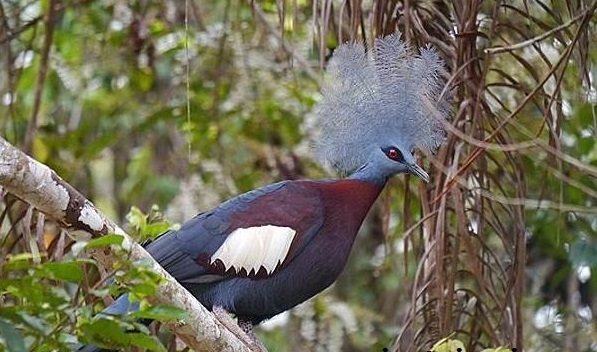 The body of a large bird, approximately from a turkey . The length ranges from 60 to 70 cm. Weight ranges from 2 to 3 kg. Females and males are not very different. The head is small, eyes are placed in a black oval and encircled by a red border, a long beak, paws of medium length, strong, claws tenacious and strong.

The color of the crowned pigeon occupies a significant place in the description. The lower part of the body is colored dark brown, turning into a chestnut shade. The upper part is gently blue with purple accents. On the wings there are wide white stripes.

Tuft three times larger than the head itself, fluffed up, on tips with tassels. It creates a fan effect. The feathers are short in front, they go farther longer and end in a thick bouquet. The crest has a shade of blue with overflows, the tassels are painted white. 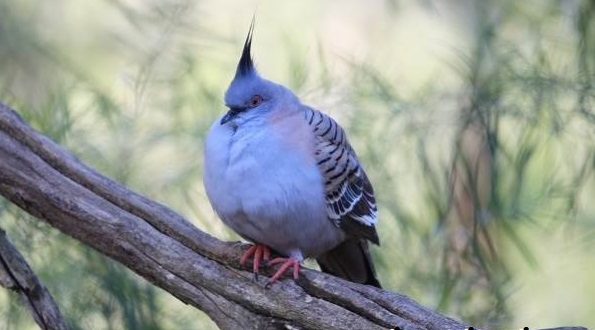 he largest bird population is located in New Guinea and has 10 thousand individuals. Crowned pigeons are also located in some regions of Australia . According to legend, the locals consider birds as messengers of the Most High, who protects them from wars.

In the entire history of the continent there were no fierce battles, but the country willingly participated in peacekeeping actions. The bird inhabits thinned forests or forest belts, yet love to dwell closer to humans. Farm and agricultural land, where there is a lot of food for them — their favorite places. 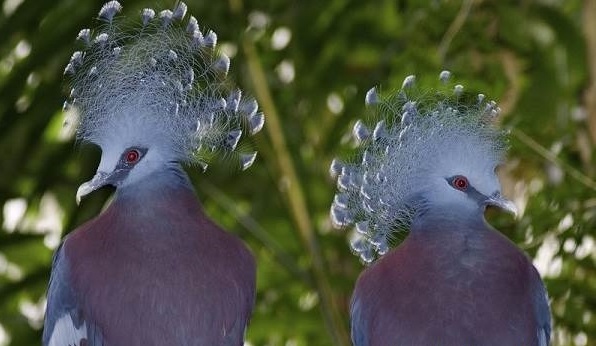 Character and way of life of a crowned pigeon

Crowned pigeon is a very trusting and good-natured bird . In fact, in nature they have no direct enemies, because they are not fearful. They love the human society, if they do not drive the bird away, they can demonstrate their beauty and love to pose for the camera.

They lead daytime life, the whole day are busy searching for food. During the marriage period, a lot of time is given to the partner. Even swans can envy their care . Juveniles huddle in a flock, only created pairs keep a little apart. They move a lot on the ground, the flight takes much less time, they like to sit on the branches for hours. 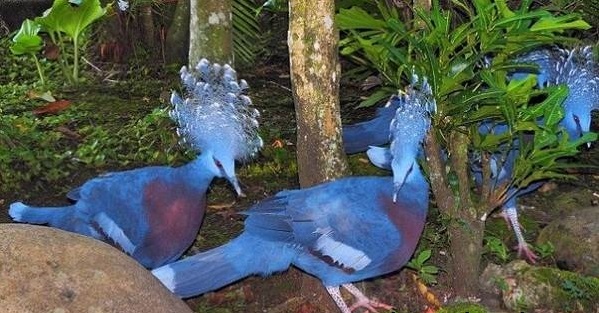 The main diet of the bird consists of different varieties of cereals and cereals, seeds, berries, seasonal juicy fruits, sometimes insects and snails . Skillfully looking for remnants of fallen seeds on the ground, nuts, they like to collect pebbles and sand.

They adore fresh foliage and greens, are ready to make raids on only ascended crops. Sometimes they can act as orderlies of trees, from under the soft bark they get small invertebrates and their larvae.

Reproduction and life expectancy of a crowned pigeon

During the courtship period, the crowned pigeon is very attentive to its partner. To win her confidence, she spends a lot of time with her, flying from branch to branch. The male publishes a pleasant rumble, as if singing a romance. Sometimes his sounds are like drumming. He also seeks to show the female where she will choose a place for the nest.

In the photo the nest of a Goura cristata

Having decided on the place, the birds sit on it for a very long time, showing the rest that this is their territory. A couple is created once and for all, if one of them dies, the rest lives alone.

By mid-autumn, the pair ends up nesting at a height of about 6-10 meters above the ground. The female lays one egg, rarely two. Rights are distributed between parents: the female incubates the clutch at night, the male — during the day. The chick appears in the fourth week of incubation. With parents the baby is from 30 to 40 days, after which the chick prepares for flight. 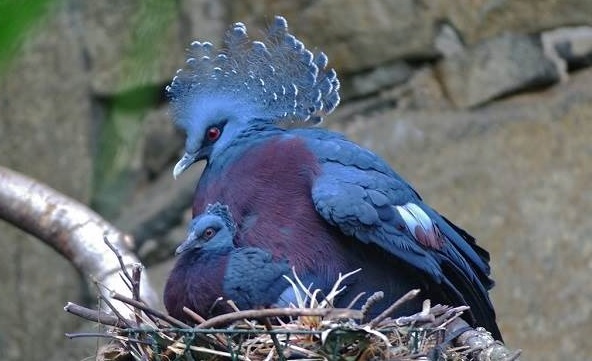 In the photo the nest of a Goura cristatawith a chick.

The life span of a crowned pigeon in natural conditions is 20 years, in captivity it can be more. All species of this family of birds are protected, although it is impossible to track every poacher. Pigeon meat has excellent taste, refers to the diet type of product.

Also, because of the beautiful appearance and tuft, feathers are used to make souvenirs. If you are an avid lover of pigeons, then buy a crowned representative is best in the nursery.

You will be recommended a healthy bird, with all vaccinations and care instructions. It is safe to say that this bird is very rare in the open spaces of our country. She is brought only by reservation, the price of a crowned pigeon is about 60 thousand rubles.