About two thirds of all snakes living on the planet belong to the family of already-shaped ones. At the moment there are about one and a half thousand species, each of which has its own distinctive features. 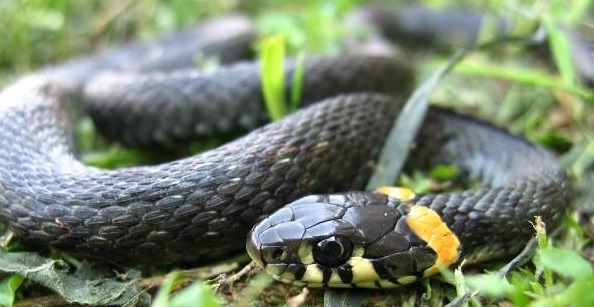 Despite the striking similarities between the snake and the common viper , due to which many people fall into a stupor at the sight of this completely harmless reptile, they differ from their poisonous relatives by their peaceful and tranquil character. Many years ago, the snake was taken to be kept as a pet instead of a cat, because they often outnumber quadrupeds in catching mice and other rodents.

On the territory of modern Ukraine, a few hundred years ago, there was a firm belief that if you hurt you already, you can easily condemn yourself to failure. At least the name of the city of Uzhgorod in western Ukraine, which has remained untouched to this day, speaks about the popularity of these reptiles. 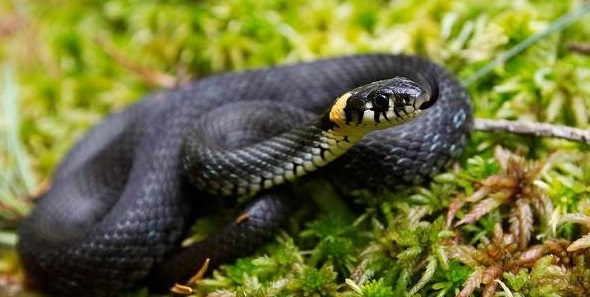 Already the snake and the viper are different in appearance. If you take a good look, you can see on their head specific spots of orange or yellow color that resemble peculiar «ears.»

However, not all individuals have a similar element of color, so they are just the easiest to confuse with a viper. So just before making a visit to the territory where it is possible to meet with various snakes, it’s best to get acquainted with the differences between these two species of reptiles so to speak and see the  snake photo .

Already ordinary does not exceed one and a half meters in length. Some individuals reach two-meter and even three-meter sizes, females significantly exceed males by their dimensions. 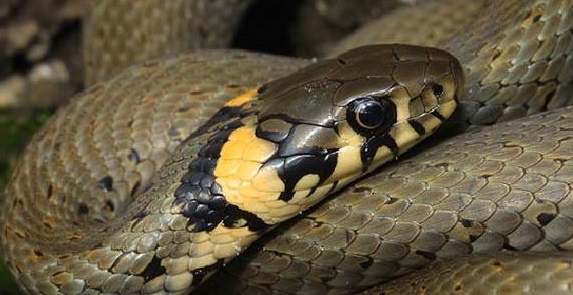 The upper part of their body is covered with scales, due to the special structure of the eyes, these organs in some species differ in the location of the pupils: those species that prefer nocturnal lifestyle have a pupil of a vertical type, the same species whose activity peak occurs during the daytime, have a normal rounded pupil.

The upper body of the snakes is usually black or dark gray in color, the abdominal part has a lighter color from white to dirty gray with patches of dark marsh spots. Water snakes , despite their close proximity in the wild with ordinary ones, are usually olive-green in color, the spots are located practically all over the body in an interesting staggered pattern.

Due to a similar color, water snakes are often confused with a viper.

Common snakes live mainly on the territory of modern Europe, North Africa and Asia. You can easily meet them in the northern part of Mongolia and China. Within Russia, snakes often settle in riverbeds, among thickets and thick bushes growing along the banks of ponds and lakes .

In the steppe and mountainous areas, snakes are also frequent residents, where they can be found at a height of up to two and a half thousand meters. Since these reptiles are not afraid of people, they can also settle in unfinished buildings, in basements, in waste dumps and even in vegetable gardens.

Usually, snakes do not make equipped holes, and the dark trees can become their refuge for the roots of large trees, heaps of foliage and branches, as well as haylofs and crevices in buildings. In soft ground, they can independently make themselves relatively long strokes. 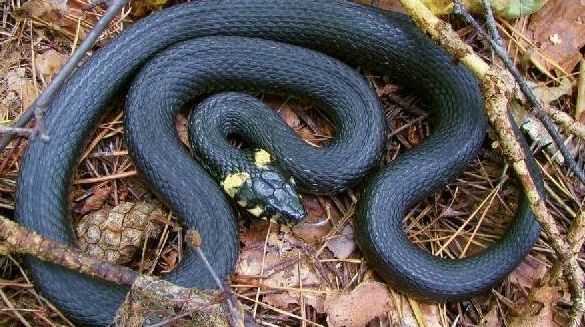 In winter, they prefer to move to more reliable places, such as burrows of all sorts of rodents and household structures made by man. Some snakes wait out the winter period alone or as part of small groups, but most individuals congregate for mass accumulation for wintering together with coppers and vipers.

There were cases when the snakes waiting for the cold in the basements of residential buildings, due to the effects of extremely low temperatures, made their way directly to the apartments and even crawled into people in bed.

To the question what kind of snake  is it is  possible to answer with precision that it has a very friendly character and does not conceal any danger to a person. As soon as they see people, they will most likely retire away, preferring not to come into direct contact with representatives of the two-legs.

In that case, if you still manage to catch him, then the snake, of course, will try to repel the aggressor, starting to actively throw his head out with a loud hiss.

If such a ploy does not bear fruit, then it will begin to emit a specific repulsive odor that can kill the appetite of even many predators, not to mention a man. Having tried these methods, the snake can pretend to be dead, so that it will finally be left alone.

Snakes belong to the unusually mobile reptiles: on flat land areas, they can reach speeds of up to eight kilometers per hour, they crawl perfectly in trees and perfectly orientate themselves in the water.

These snakes are swimming , lifting their heads directly above the water surface and leaving behind the characteristic traces in the form of ripples. They are able to stay under water for up to half an hour and quite often sail several dozen kilometers from the coast.

Water snakes, on the contrary, are characterized by relatively low mobility and increased susceptibility to heat, so they do not show any noticeable activity at night, but as soon as the first rays of the sun appear, they immediately go to surf the water. In case of danger, they can lie on the bottom or, in rare cases, crawl onto one of the birds, such as geese or swans,in order to look out for their future prey.

Are there snakes poisonous snakes ? Although most of the representatives of this species are not poisonous and are considered safe for humans, there are snakes of the family of snakes (or rather, they fall under the category of false snakes), which have fangs that can poison a rather large animal when bitten. For a person such poison is conditionally dangerous, that is, it can lead to death only in exceptional cases.

All kinds of amphibians, such as toads, tadpoles, lizards and newts , are favorite food for snakes . Occasionally, insects, small birds and mammals are included in their diet. The most favorite food for the snakes are frogs, which they are ready to hunt at any time of the day, which leads to the extinction of the frog population in places of mass gathering of these reptiles.

The frogs are their favorite prey.

On the coast or in the middle of the water surface, it usually sneaks up on a frog, trying not to disturb its potential prey, then makes a sharp jerk and grabs an amphibian. On land, he can simply start chasing after them, and it’s not at all easy for the frog to get away from the speedy snake .

After the victim is captured, she begins to swallow it, and without fail from the very place for which he, in fact, caught her. Different types of snakes have their own food preferences: some simply adore toads, others will not touch them. In captivity, they can even eat raw meat.

Reproduction and life expectancy of the grassland

The marriage period of snakes usually occurs in the spring, with rare exceptions in the fall. Grooming in these reptiles occurs without particularly complex elements, the number of eggs per laying varies from 8 to 30. 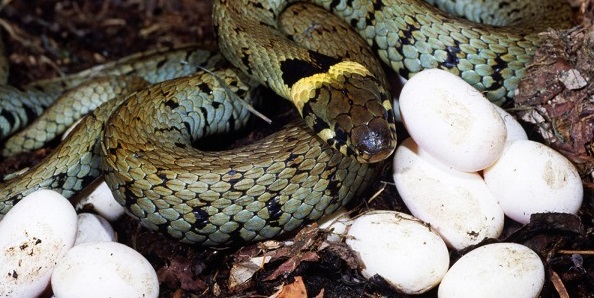 The photo nest is narrower

For hatching eggs, the female usually selects the optimal place, such as, for example, a bunch of dry foliage, peat or sawdust. The time spent by eggs in such an incubator before hatching of offspring is from one to two months. In the wild, the life span of a snake may reach twenty years. For content in the home this reptile is not the best option, so it is best to get less dangerous pets.