Apes or hominoids are a superfamily, which includes the most highly developed members of the primate order. It also includes a person and all his ancestors, however, they are included in a separate hominid family and will not be discussed in detail in this article. 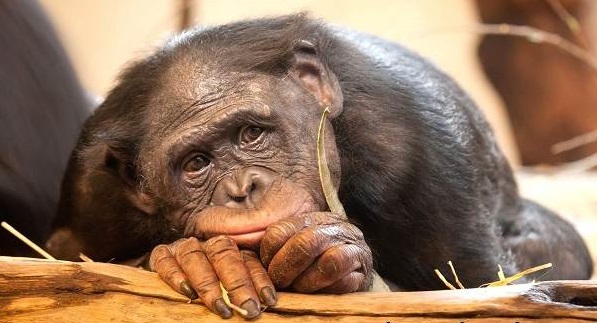 Further in the text, the term “great apes” will be applied only to the other two families: gibbon and pong.

What makes a great ape from a man? First of all, some features of the body structure:

1)The human spine has forward and backward bends.

2)The front part of the cranium of the great apes is larger than the brain.

3)The relative and even absolute brain volume of monkeys is much less than that of humans.

4)The area of ​​the cerebral cortex is also smaller, besides the frontal and temporal lobes are less developed.

5)The great apes have no chin.

6)The monkey’s chest is round, convex, and in humans it is flat.

7)The monkey’s fangs are enlarged and protruding.

8)The pelvis is narrower than that of a human.

9)Since the man is erect, his sacrum is more powerful, since the center of gravity has been transferred to him.

10)The monkey has a longer body and arms.

11)Legs on the contrary, shorter and weaker.

12)Monkeys have a flat, grasping foot with a thumb opposed to the rest. In humans, it is curved, and the thumb is parallel to the other.

13)A person has almost no coat. 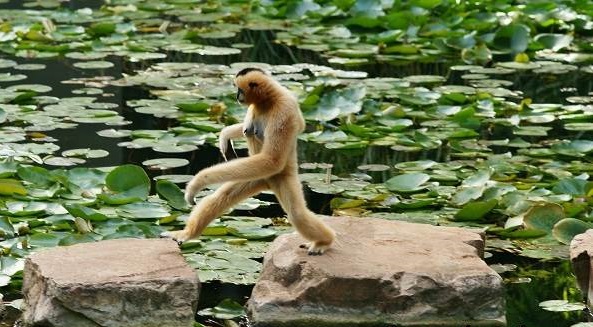 In addition, there are a number of differences in thinking and activity. A person can think abstractly and communicate with speech. He is conscious, capable of summarizing information and compiling complex logical chains.

1)large powerful body (much larger than other monkeys);

Also hominoids are distinguished by their way of moving through trees. They do not run on them on four paws, like other members of the primate detachment, but clutch their hands on the branches. 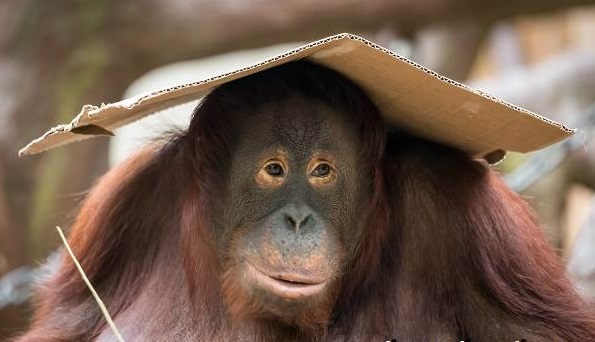 The skeleton of great apes also has a specific structure. The skull is located in front of the spine. At the same time, it has an elongated facial part.

The jaws are strong, powerful, massive, adapted for crushing hard plant food. The arms are noticeably longer than the legs. The foot is prehensile, with the thumb set aside (as on a man’s hand).

The apes include gibbons , orangutans, gorillas and chimpanzees. The first are separated into a separate family, and the remaining three are combined into one — pongida. Consider each of them in more detail.

1)The gibbon family consists of four genera. All of them live in Asia: India, China, Indonesia, on the islands of Java and Kalimantan. Their color is usually gray, brown or black.

Their sizes are relatively small for apes: the body length of the largest representatives reaches ninety centimeters, weight — thirteen kilograms.

Lifestyle — daytime. They live mainly on trees. They move uncertainly on the ground, mostly on their hind legs, only occasionally leaning on their front paws. However, they go down quite rarely. The basis of nutrition is vegetable food — the fruits and leaves of fruit trees. They can also eat insects and bird eggs. 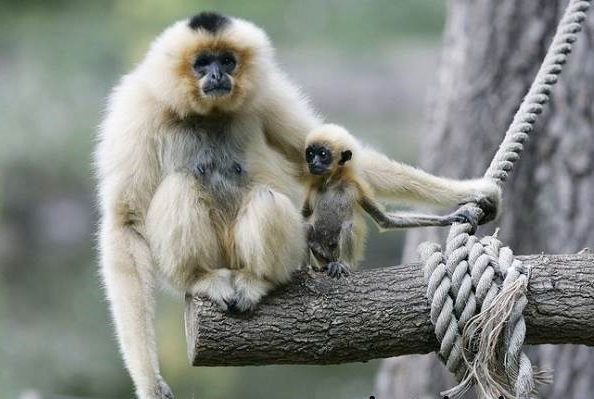 On the photo is the great ape Gibbon

2)The gorilla is a very large anthropoid ape . It is the largest member of the family. The height of the male can reach two meters, and the weight — two hundred fifty kilograms.

These are massive, muscular, incredibly strong and hardy monkeys. Coat color is usually black; old males may have a silver-gray back.

They live in African forests and mountains. They prefer to be on the ground, on which they walk, mainly on four paws, only occasionally rising to their feet. The diet of the vegetable, includes leaves, grass, fruits and nuts.

Fairly peaceful, aggression towards other animals is only shown in self-defense. Intraspecific conflicts occur, for the most part, between adult males due to females. However, they are usually resolved by demonstrating threatening behavior, rarely reaching even fights, and even more so before murder. 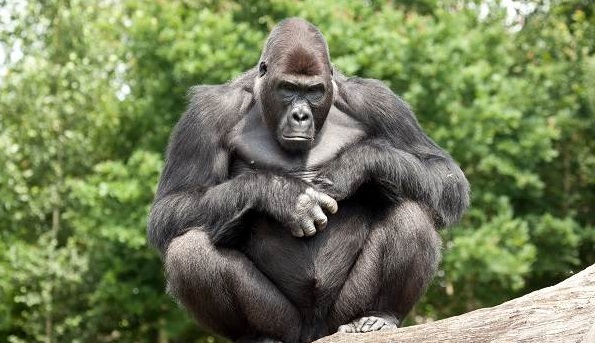 3)Orangutans are the rarest modern apes . Currently, they live mainly in Sumatra, although they used to be distributed almost throughout Asia.

These are the largest of the monkeys, living mainly in the trees. Their height can reach one and a half meters, and weight — one hundred kilograms. Wool is long, wavy, can be various shades of red.

Orangutans live almost entirely in the trees, not even going down to get drunk. For this purpose, they usually use rainwater, which accumulates in the leaves.

For spending the night they make their nests in the branches, and every day they build a new dwelling. They live alone, only forming breeding pairs during the breeding season.

Both modern species, Sumatran and Klimantan, are on the verge of extinction. 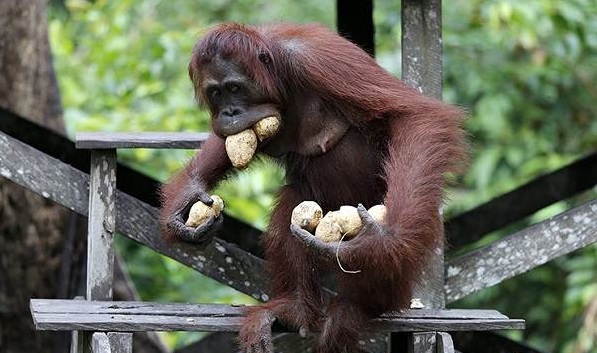 4)Chimpanzees are the smartest primates, great apes . They are the closest relatives of man in the animal world. There are two kinds of them: common chimpanzee and miniature, also called bonobos . The size of even the usual form is not too large. The coat color is usually black.

Unlike other hominoids, with the exception of humans, chimpanzees are omnivores. In addition to plant foods, they also consume animal food, obtaining it through hunting. Enough aggressive. Often there are conflicts between individuals, leading to fights and death.

They live in groups of about ten to fifteen on average. It is a real sophisticated society with a clear structure and hierarchy. Normal habitat — forests near water. The area is the western and central part of the African continent. 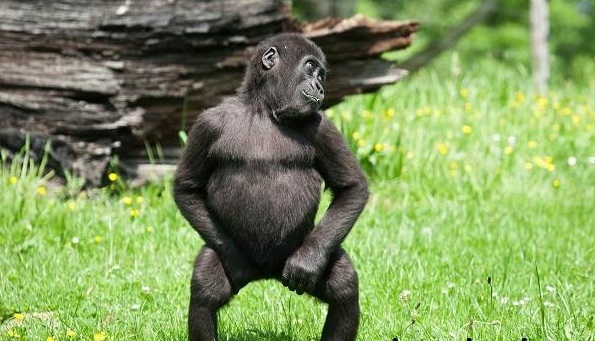 The ancestors of great apes are very interesting and diverse. In general, there are much more fossil species in this superfamily than living ones. The first of them appeared in Africa almost ten million years ago. Their further history is very closely connected with this continent.

It is believed that the line leading to the people, separated from the other hominoids about five million years ago. One of the likely contenders for the role of the first ancestor of the genus Homo is considered Australopithecus — the great-ape , who lived more than four million years ago.

These creatures contain both archaic signs of monkeys , and more progressive, already human. However, the first significantly more, which does not allow attributing Australopithecus directly to people. There is also an opinion that this is an incidental, dead-end branch of evolution, which did not lead to the emergence of more advanced forms of primates, including humans. 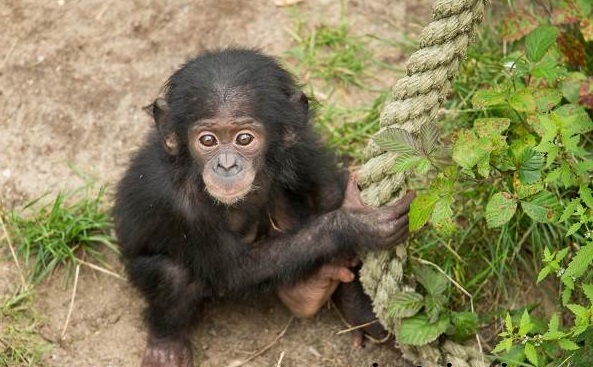 But the statement that another interesting ancestor of man, the synanthropus — the great apes , is fundamentally wrong. However, the assertion that he is an ancestor of man is not entirely correct, since this species already unambiguously refers to the genus of people.

They already had developed speech, language and their own, albeit primitive, but culture. It is very likely that the synanthropus was the last ancestor of modern homo sapiens. However, the option that he, like Australopithecus, is the crown of the secondary branch of development is not excluded.