The Greenland whale lives in polar waters. This whale belongs to the baleen sub-order and is the only mammal of the Greenland species. The body of the female bowhead whale reaches a length of up to 22 m, the males, oddly enough, their maximum size is 18 m. 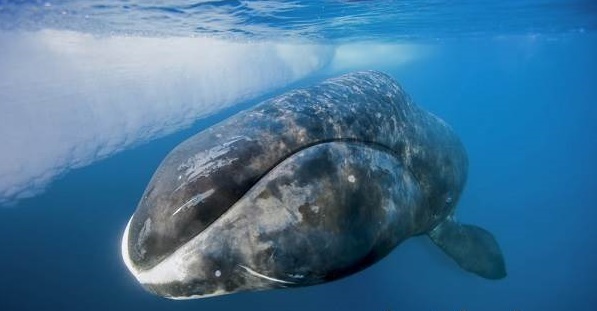 The weight of the bowhead whale can be from 75 to 150 tons. It has the ability to dive deep into the water at 200 m, and not to rise to the surface for up to 40 minutes. This is not a frequent phenomenon, in most cases the whale does not sink like that, on average, it’s under water for 10-15 minutes.

They migrate in a flock, where they are divided into three groups: adults, mature and 30 years old. During the search for food, stick together, line up with a wedge or in the form of a Roman numeral V. When studying behavior, it was noted that females and calves are privileged to feed first, the rest of the pack builds up behind them.

Description of bowhead whale . The usual color of an adult whale is dark gray, but there are separate individuals of blue and black colors. One of the distinguishing features of the bowhead whale is that the lower part of the massive body of the whale is much lighter than the main color. 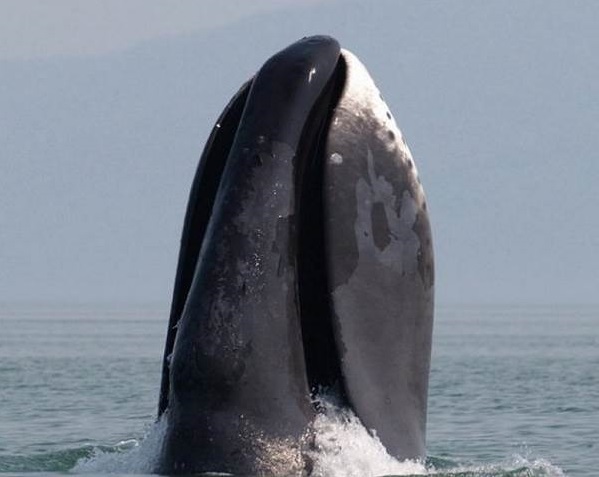 Another feature of the structure can be attributed to the size of the jaws. In this species, the upper jaw is much smaller than the lower. The mouth of the whale is located high and has a symmetrical arcuate shape.

The head of the bowhead whale is very large, in relation to the whole body, occupies a third of the entire length of the whale. A careful study of the structure noted that near the head of this mammal has a place that resembles the neck.

The representative of this species does not have teeth, however, the oral cavity is equipped with a large number of whalebone plates. Their length is from 3.5 to 4.5 m, and the number varies up to 400. 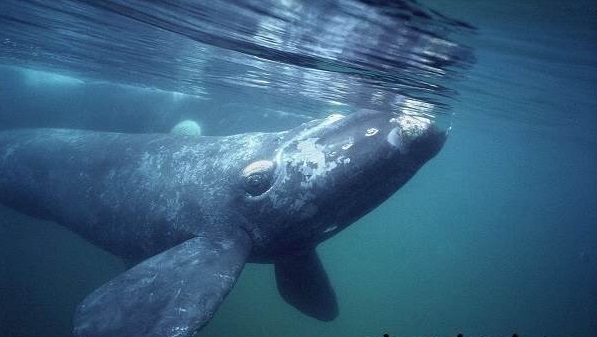 Subcutaneous fat layer in a mammal is very thick — up to 70 cm, this layer helps to cope well with pressure during deep diving, and maintains a normal temperature, which is the same for the bowhead whale as the temperature of the human body.

The eyes of a whale are small with a thick cornea, they are located on the sides, near the corners of the mouth. The whale does not have a dorsal fin, but the tail and lateral fins are very developed, the maximum speed of an adult individual can be up to 20 km / h. During the ascent after a deep dive, the whale can blow out a double-jet fountain up to 10 m high.

Whales do not have any external ears, but hearing is highly developed. The inner ear is able to perceive not only sound waves, but also ultrasound. Sound perception in a mammal has a very large range. 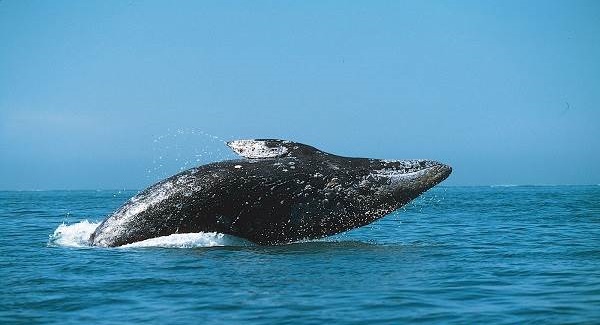 Some functions of hearing in a polar whale are similar to sonar ones, thanks to them the animal easily navigates under water, even at great depths. This hearing property helps whales determine distances and locations.

The harp whale habitat is part of the Arctic Ocean. Mostly flocks of these mammals are found in the cold waters of the Chukchi, East Siberian and Bering Seas.

Less common in the Beaufort Sea and the Barents Sea. Greenland whales are constantly migrating, this is due to the temperature of the water. In spring and summer, whales go far into cold waters, and in winter they return to the coastal zone. 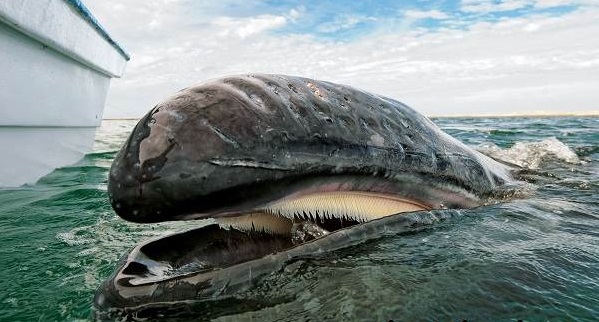 Despite the fact that the Greenland polar whale lives in the Arctic , he prefers to move in clear waters without ice floes. Although in some cases use an ice crust to disguise from the perceived threat. If it is necessary for a whale to emerge to the surface while under water, it easily breaks through ice 25 cm thick.

The nature and lifestyle of the bowhead whale

Greenland whales prefer to be in the flock, but sometimes you can find single individuals. Many of the character traits in whales have not been investigated, since due to the specific habitat, detailed study of mammals is impossible. At rest or sleep, the whale is on the surface of the water.

Due to the impressive and frightening size, the bowhead whale has few enemies. Only a killer whale , or rather a flock, can inflict heavy damage on a mammal, often the prey of killer whales are young individuals who have fought off the flock. 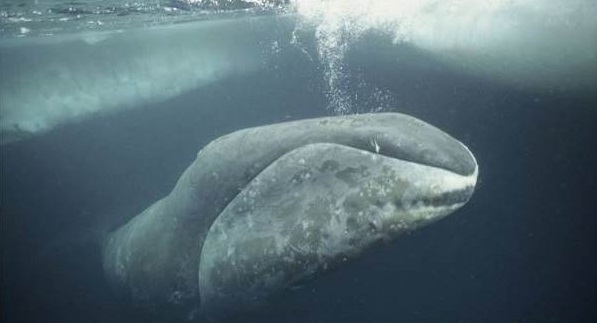 Natural, natural selection does not greatly affect the population, but the mass extermination of this species by humans has led to a critical decrease in the number of bowhead whales in nature. Today, the bowhead whale is in the red book , in the world there are only up to 10 thousand individuals. Since 1935, hunting for them has been strictly forbidden.

What does the bowhead whale feed on?

The main diet of the polar whale is plankton, small crustaceans and krill. The process of absorption of food is quite interesting, the whale swims under water with a mouth wide open. At this point, food enters the cavity and with the help of the tongue moves into the esophagus.

Due to the fine structure of the whalebone, after filtration in the mouth of the whale almost all the plankton, and even the smallest of its particles, remain. During the day, an adult animal absorbs up to 2 tons of food. 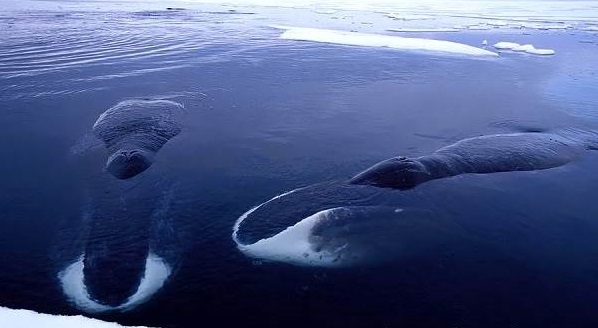 Reproduction and life expectancy of the bowhead whale

One of the features of this type of mammal is considered to be the performance of a mating song by the male. Scientists say that every year the whale performs different tunes. The individuality of sounds and their combination turns into a unique melody that calls the female to mate.

Listen to the voice of the bowhead whale

In addition to sound, the whale can jump out of the water and at the time of immersion to make a strong slam on the surface of the tail, it also attracts the attention of the female. After fertilization, after 13 months, the female gives birth to a four-meter cub. Female whales get pregnant once every three to four years. The first 6 months the baby is breastfed, and all the time is next to the mother.

Over time, she adopts the skills of the female and feeds on her own, but continues to be near the female for another 2 years. After 20 years, the male can self-fertilize females, which become sexually mature earlier by 3-4 years. The average lifespan of a whale is up to 80 years. Often there are separate individuals that according to the results of research live more than 100 years.

It is believed that in nature there are representatives of the species, whose age is more than 200 years, this phenomenon is extremely rare, but despite this, the species claims to be the honorable long-livers among mammals.

Such a long-term existence has aroused great interest among scientists, the whole world. Through research, it was found that the genome of marine animals due to increased cell division, is able to cope with various diseases, including the formation of cancer cells. Polar whales possess genetic abilities that are associated with the complete recovery of the genome and resistance to cancer.