There is controversy over whether the harpy is the largest bird of prey on earth. Scientists claim that there are feathered and large sizes, however, the fact that the harpy bird is one of the largest, this fact remains indisputable.

Translated from the Greek language «harpy» means «abducting.» The size of such a kidnapper is impressive, because the length of the body ranges from 86 to 107 cm, and the wingspan reaches 224 cm. At the same time, the bird has claws that any fashionista would envy, these claws grow to 13 cm. 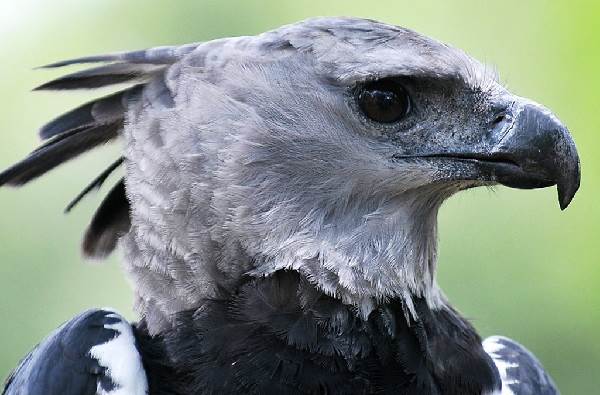 Interestingly, males of harpy are weighing almost half the size of females, males are 4, 8 kg, and female weighs up to 9 kg. There is evidence that in captivity, where you do not have to spend energy searching for food, the harpies reached a weight of more than 12 kg. If we look at the harpy in the photo, it can be noted that the plumage on the bird’s back is dark and the head has a light gray color.

But the neck is covered with almost black feathers. The bird does not acquire such plumage immediately, but only with age. Young birds have a lighter and less expressive color. On the head there is a number of especially long and wide feathers, which forms a kind of tuft, or rather, a crest.

In the calm state of the bird, this ridge does not stand out too much, but in an excited ridge it rises either in the form of a crown or in the form of a hood. Some scientists believe that when you lift the hood at the harpy, hearing improves. 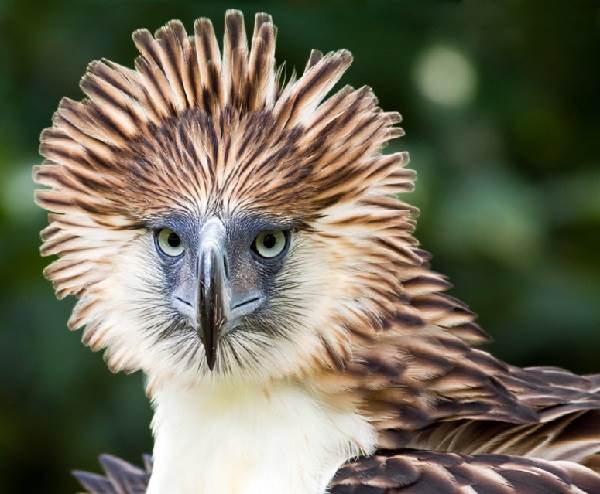 The harpies have excellent hearing, and their eyesight is excellent. It has long been known that vision is the hallmark of all hawks. Harpy prefers to settle in the wild thickets of tropical forests, which are adjacent to the rivers. Especially for this, it is suitable forests of Panama, Colombia, Brazil, southern Mexico.

Prefers to hunt harpy day. Its victims are located on the branches of trees, counting on safety, but this huge predator, despite its large size, easily maneuvers between the branches and snatches monkeys, sloths, possums and other mammals.

The paws of this bird are so strong that it not only easily holds such prey, but also breaks the bones of its prey. Do not think that in the open area something prevents the bird to hunt. She can easily drag off a small deer. Harpy is considered one of the treacherous predators. It does not kill its prey immediately, the bird pulls out the trachea of ​​prey, which is why the unfortunate animal dies a long and painful death. 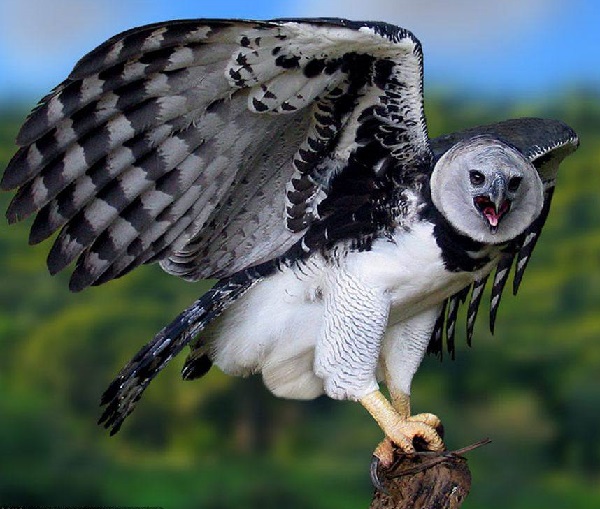 But such cruelty by nature was not invented by chance — in this way the harpy manages to bring the victim to its nestlings still warm, with a pungent smell of blood, and the chicks learn to control a still alive animal. Harpies do not seek to fly from place to place, they prefer to lead a sedentary lifestyle. At the right time, a suitable tree is chosen (it should rise above all other trees to ensure maximum visibility), and build a nest at an altitude of 40-60 meters from the ground.

Built nest in diameter reaches 1, 7 m and more. The nest is lined with twigs and moss. Such a “house” has been used by birds for many years. Harpy is considered not only the most cruel and terrible predator, but also the most amazing. Her bright appearance can not attract attention. The most beautiful bird in the world is the South American harpy. Many people want to buy such a bird, regardless of the price. However, difficulties with this feathered consist not so much in money, as in the content. 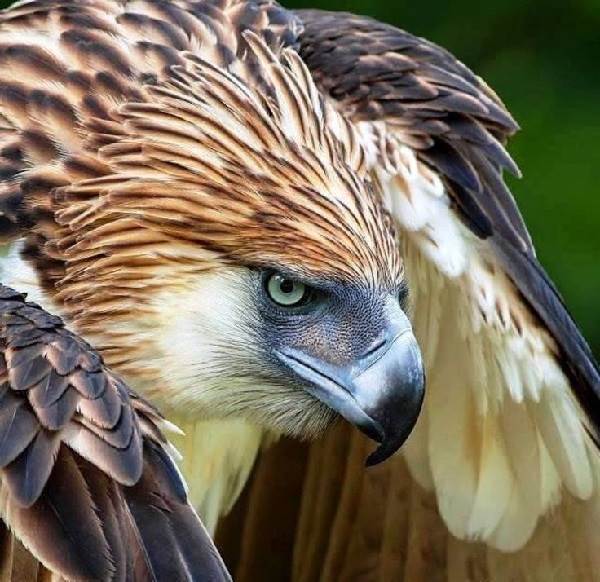 Birds kept in captivity, try to provide similar conditions. Of course, even remotely resembling the conditions of life in freedom will be able to provide only zoos, and even then, not everyone. Therefore, before you have this amazing feathered, it is worth seriously thinking. Otherwise, the bird may simply die. And the number of harpies is already decreasing every year.

The diet of harpies consists of monkeys, sloths, but they are well eaten by them and dogs, snakes, lizards, pigs and other animals, which, very often, exceed the weight of the bird itself. Harpy is the only predator that hunts on tree porcupines. The moral foundations of the birds are unknown, so even the brethren are eaten. If a harpy begins to hunt, no one will hide from it. She does not miss her sacrifice. 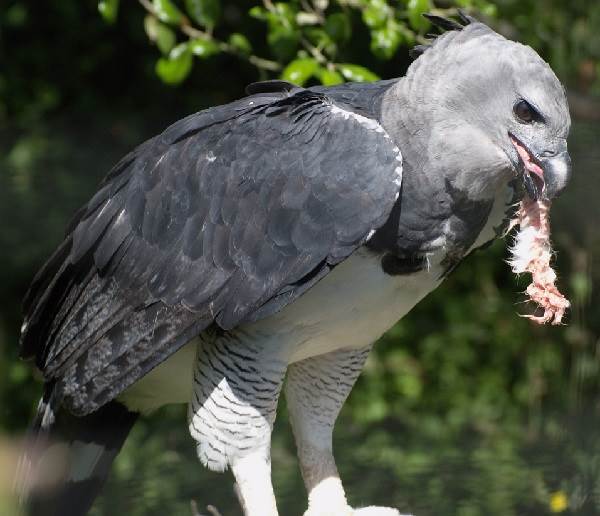 But those who would have threatened the harpy itself, there are none. Therefore, in the food eco-chain, these birds occupy the upper link. This bird is another name — a monkey. Because of this gastronomic predilection, harpies risk their own lives, because many locals worship monkeys, consider them to be sacred animals, hence, they easily bring a hunter to a sacred animal to death.

When the rainy season begins, and this is in April-May, the harpies are preparing for reproduction. By the way, the breeding of birds does not occur annually, but after a year. These birds choose a satellite once and for a lifetime. In the breeding season, the bird does not have to fuss too much — it already has a home and a “family”.

The female can only lay eggs. There are few eggs in the clutch — from 1 to 2. 2 eggs for a couple is already a lot, because all the care and food from both parents goes to only one chick. As a rule, it is the chick who hatched first. And the other chick, being right there in the nest, is forced to simply die of hunger. Only one of the chicks survives. Protecting their nest, the harpies become especially cruel and ferocious. They can easily attack even a person in such periods. 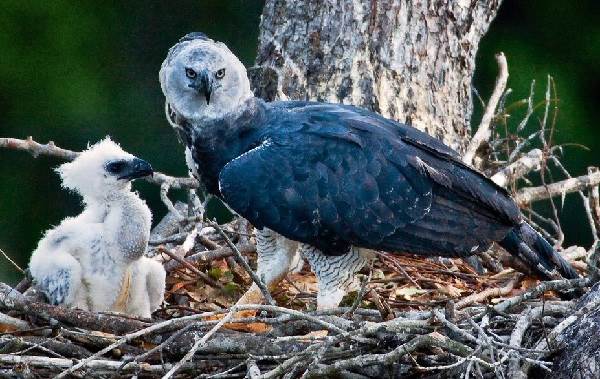 Harpy with baby bird in nest

The baby is very long under the care of parents. He begins to fly only at the age of 8-10 months, but even after his confident flights, he still cannot feed himself, this is understandable — the food of the harpies is too complicated.

Therefore, the chick does not fly away from the nest of the parents. It happens that you have to starve for up to two weeks, but this bird endures without any special damage to health, a successful hunt for parents to make up for the lost. 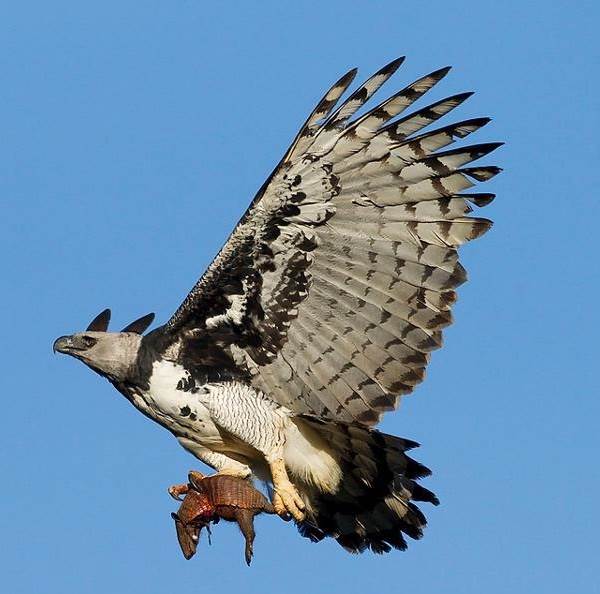 Harpy in flight with prey

Only at 4 years old the puberty of the chick begins, which is immediately reflected in his outfit, the feathering becomes brighter and more saturated. It is believed that harpies live up to 30 years, although accurate data is not available.