Peculiarities and habitat of gila-tooth

There are a whole host of animals on earth that we may not even have heard about, but which are just as interesting as any other. An interesting animal with a dangerous name gila bison . It is the only representative of the gila-toothed family. 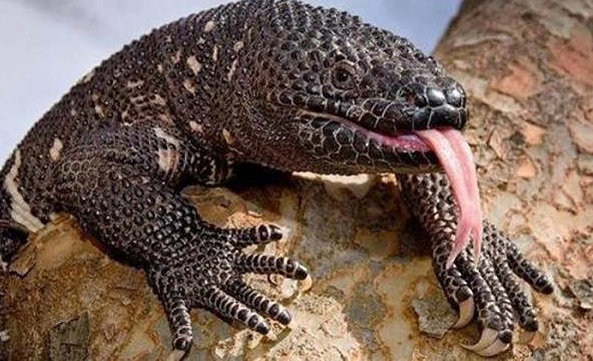 If you look at the photo, then we will have a rather large lizard , its body length reaches 50 cm, which is not only poisonous, but also has the most real teeth.

This lizard has a dense, large body, which is covered with scales, with a slightly flattened head and not too long tail, in which it retains all its fat reserves.

Like most reptiles, they have rather short legs, but their fingers are armed with too long claws. The tongue of the gila-annuli is large and forked. In order for the enemies not to attack once again, the goose has a warning coloring. 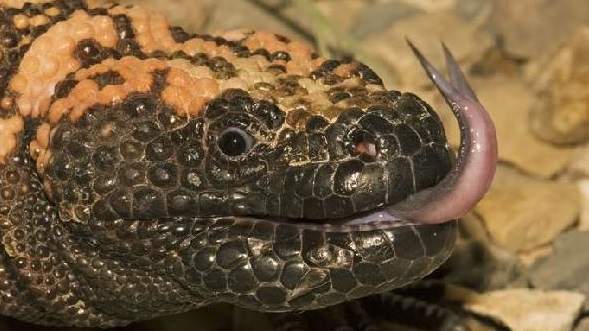 Young individuals are especially brightly colored against a dark background with bright orange, yellow or red spots, and the tail is painted in dark and light stripes. However, the color may vary. But if the young individual can be distinguished from the adult by brightness, then it is impossible to distinguish between the sex characteristics of these lizards.

The poison in this lizard is formed in the top of the mouth and, when the goose is closing its mouth, the poison is released directly to the dental grooves. These animals are common in the USA, especially often found in the states of Nevada, Arizona (there are Arizona crowns ) and New Mexico.

Their range captures a small territory in California and Silanoa (Mexico, there lives a Mexican gila-tootube ). The bottom of the canyons, overgrown grass, various shrubs and cactus sprouts — this is the place where the beast is most comfortable.

The greatest vital activity is observed in these lizards in the daytime. But this is only when the air temperature is above 24 degrees, and the humidity is 80%. Such a climatic condition occurs only from the end of winter and continues throughout the spring. But in the end of spring and the beginning of summer, the beast teeth move to nocturnal lifestyle.

This is explained by the fact that these lizards are too sensitive to air humidity, so they choose the most convenient mode for themselves. But the most interesting thing is that the goose does not really hope for the weather, so more than 90% of his life he spends underground. 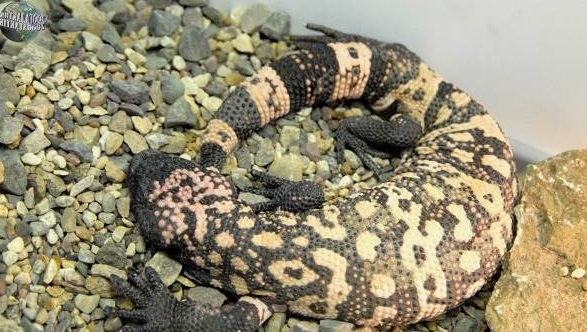 This «miserly knight» does not spend 200 hours a year to search for food, grooming and breeding. In winter, the goose-toothed hibernates, and wakes up only by the end of the last winter month. He digs a hole for himself, and he can use someone else’s mink, where he spends all his regular time.

This lizard is moving slowly, awkwardly, but the gila-beetle is a wonderful swimmer, as well as, it can wonderfully climb rocky slopes and get quite well even on the trees, in search of laying.

In general, the goose bastard is not a fan of scandal When he encounters an enemy, he tries to hide in his hole, but if this fails, then he tries to scare the enemy with terrible sounds, hissing and snorting. Poison is used only in the most extreme cases. And this is understandable, because it is not uncommon for the bite itself that the gila to die. 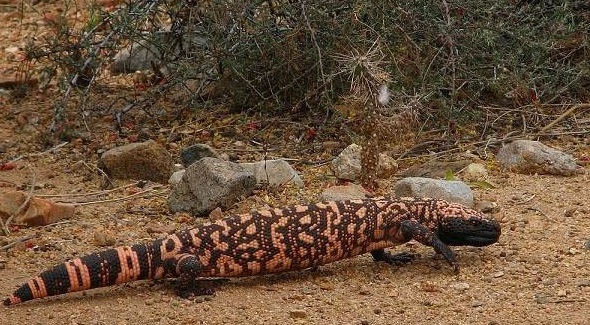 And yet, despite this feature, there are lovers who want to get such a “time bomb” at home. They will have to advise to create for this animal living conditions close to the wild.

And still imperative advice is to provide yourself with an antidote and to learn well the rules of behavior with such a pet, because a pet can at any time.

Experienced reptile lovers in general are advised not to touch the goose teeth unnecessarily. And the need may come, perhaps, during the period of molting, when the pet will not be able to throw off the scales and he will need help.

In zoos, teeth toxins provide an adequate area where a layer of soil is poured, allowing burrows to be dug. And another mandatory requirement is the presence of a pool in which the goose teeth could dive completely. It is required to comply with the regime of temperature and humidity, and in order for the couple to multiply, they are given an artificial wintering. 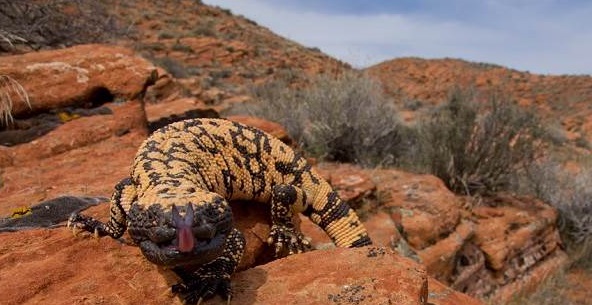 In spite of its size, the goose does not eat large animals. His diet includes various insects , snakes , rodents and other small animals. Many birds and other reptiles make their nests on the ground in the grass. YadiZub finds these nests without difficulty — his sense of smell is too keen.

He can even smell eggs, buried in the ground or sand, and it’s not difficult to dig up such a laying. Eggs from such nests are one of the favorite dishes of poisonous gourmet. 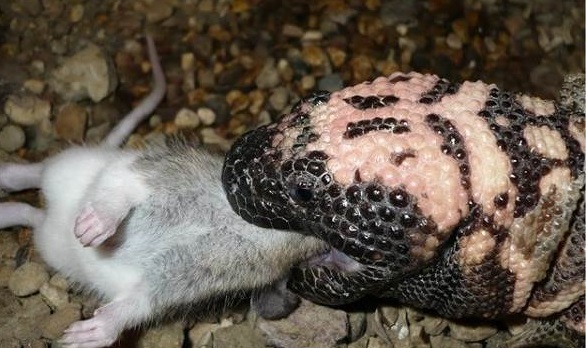 In especially hungry times, the goose can have a bite of carrion. If there is no food at all, then he may starve. Without food can be up to 5 months. But when there is enough food, an adult canine can swallow food, which will be one third of its own weight. Excess food lizard lays itself in the tail.

With the onset of spring, the teeth of the teeth hibernate. This is the perfect time for the lizard — the air is still quite humid, but it is already warming well. At this time, the marriage period begins. For the lady’s paw and heart, goose bears — males lead fierce fights.

After the battle, the vanquished runs away in disgrace, and the winner becomes the father of the future offspring. Females can walk pregnant for 35 to 55 days. In late summer — early autumn, they begin to lay eggs. There may be 3 or maybe 12 eggs, it depends on many factors: on the amount of food, on the age of the female, on the age of the male and even on the temperature of the gestation period. 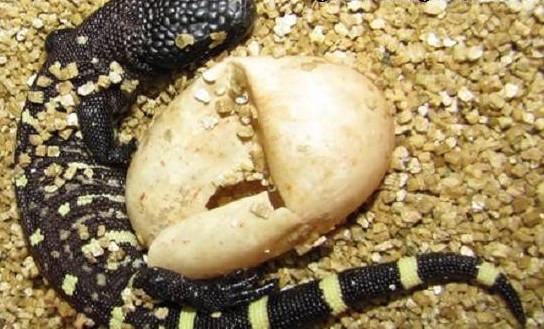 The shell of laid eggs is soft at first, not solidified, but the female will not wait, she immediately buries the eggs in the ground to a depth of 7-12 cm. This ends the mother’s care. The female will not guard the clutch. And after 124 days, the eggs hatch from eggs, which are about 12 cm in size. The exact life expectancy of these animals has not yet been established.