The bare excavator (lat. Heterocephalus glaber) is a small rodent living in eastern Africa, in the semi-deserts and dry plains of Ethiopia, Kenya and Somalia. An amazing animal that has gathered in itself unique physiological abilities for a mammal, and is striking in its social organization, which is completely uncharacteristic for representatives of the animal kingdom. 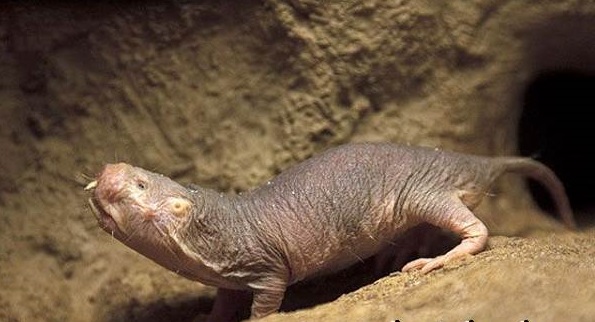 Appearance of the Naked Digger

The photo of the naked excavator is not the most pleasant sight. The animal looks like either a large, newly born rat, or a bald miniature mole. The pinkish-gray skin of a dredge has almost no hair. You can see a few vibrissae (long hairs) that help a blind rodent to orient themselves in underground tunnels, but they are few.

The length of the body of a naked excavator does not exceed 10 cm, including a small tail of 3-4 cm. Body weight is usually within 35-40 grams. Rodent females are almost twice as heavy — about 60-70 g.

The structure of the body is adapted to the underground lifestyle of the animal. The naked digger moves on four short legs, between the fingers of which grow tough hairs that help the animal dig the ground.

Tiny eyes with weak eyesight and reduced auricles also indicate that the animal lives under the ground. However, the sense of smell in an animal is enviable and even functionally divided — the main olfactory system of diggers searches for food, an additional sense of smell is activated when individuals need to recognize their own kindred by status. This is an important point, as the way of life that leads an underground animal depends on the status.

Two long front teeth, growing from the upper jaw, serve as a small animal for digging. The teeth are strongly pushed forward, which makes it possible for the lips to tightly close the orifice from falling into the ground. 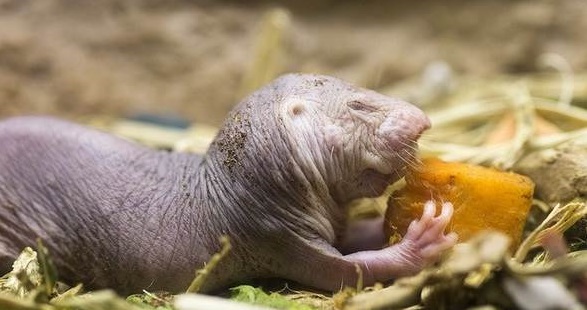 Unique features of the naked excavator

It is difficult to find a mammal that can compete with a naked digger in the number of amazing features of the functioning of its life systems: 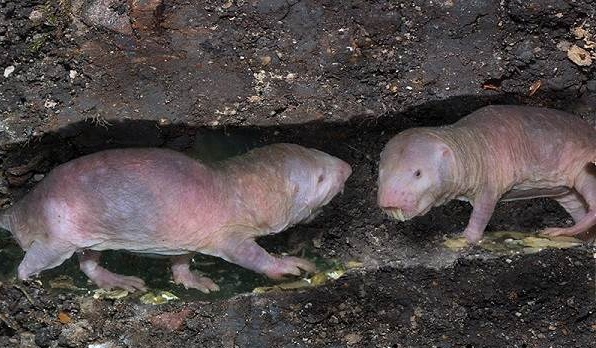 A bare excavator can do without oxygen for about 30 minutes. without harm to health

Lifestyles of the Naked Digger

Not trite and the social structure of life of underground rodents. Naked excavators live on the principle of an anthill — colonies in which matriarchal reigns. The queen is the only female who has the right to produce offspring.

The remaining members of the colony (their number reaches two hundred) distribute duties among themselves — stronger and more durable labyrinths, large and elderly protect snakes from the only enemy of the diggers, and frail and small ones take care of the younger generation and search for food

Underground tunnels, diggers bare digging, lining up in one long line. The worker at the head of strong teeth paves the way, passing the earth to the one who is behind, and so on along the chain, until the earth is thrown to the surface by the last animal. During the year, such a colony unloads up to three tons of soil.

Underground passages are laid to a depth of two meters and can reach five kilometers in length. Like ants, a colony of naked excavators settles the labyrinths with storage rooms for food, rooms for raising young animals, and separate apartments for the queen.

Diggers do not have a specific breeding period. The queen produces offspring every 10-12 weeks. Pregnancy lasts about 70 days. In the litter of the female, the number of cubs is record for mammals — from 15 to 27. 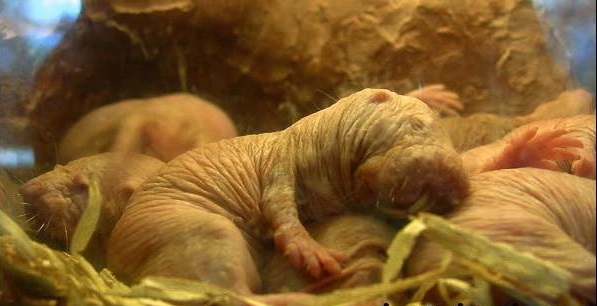 There are twelve nipples in the female, but this is not an obstacle to feeding all babies with milk. The queen feeds them in turn during the month. After this period, the grown individual becomes a labor and joins adult relatives.

Naked diggers reach sexual maturity at the age of one year. But only the queen is allowed to mate and produce offspring. For disobedience, a cruel autocrat can strongly bite a guilty member of a colony, even to the death of an animal.

How many live naked men? Unlike their fellow mice and rats, underground diggers are considered to be long-livers. On average, the animal lives for 26-28 years, retaining throughout the journey the body’s youth and ability to reproduce.