Description and features of the hummingbird bird

Hummingbirds are not only the smallest birds on our huge planet, but also a magnificent decoration of our nature. Their bright coloring of feathers and special character makes these miniature creatures attractive.

There are more than 300 species of hummingbirds, which have minor differences. Among such a multitude there are champions — the smallest birds of hummingbirds. Sometimes these birds resemble more butterflies or some insects because of their tiny size. Hummingbird birds-bees have a weight of only 2 grams !!! 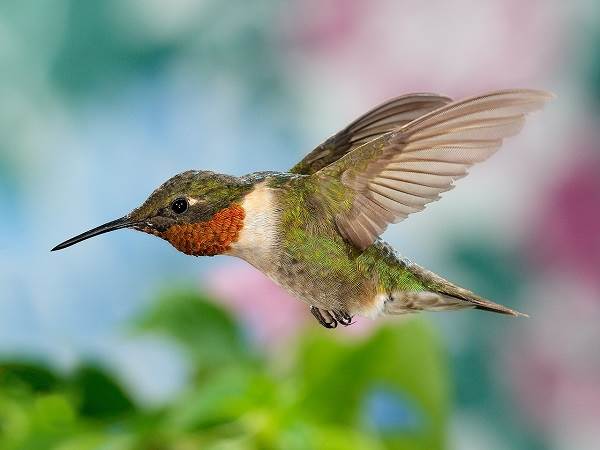 This species is the tiniest and unique. These amazing birds, the size more similar to the bumblebee, have an amazing color. The feathers are green above them, but they are white below and the sun shines very beautifully. On average, the weight of a hummingbird hummingbird bird is approximately 20 grams.

The size of the hummingbird is also small, they are in the range from 7 centimeters to 22, it is the length of the bird from the tip of the beak to the tip of the tail. The largest hummingbirds have feathers on top of brown with green tint, and below are red-brown, and nadhvoste gray-yellow.

The color of the bird itself often depends not only on the color in which nature painted the feathers, but also on the angle of view and direction of the light rays. Very often, the color can change and shimmer with all the colors, something like a play of color on the edges of gems. 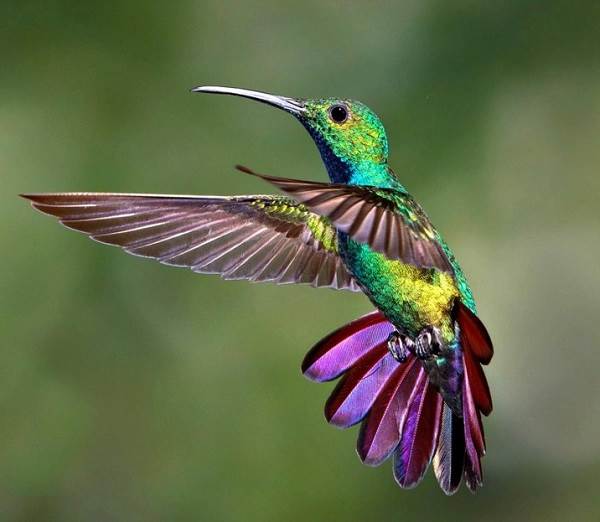 It should be noted that the color range of males is much richer and much brighter, the representatives of the weaker sex clearly lose in this comparison. Wonderful poems have been written about the unprecedented beauty of the bird:

«In the thicket of the forest, in the thick of darkness,
The dawn beam trembled.
There are hummingbirds, spark-ptah,
Like a little fire. ”

Here is another example of the literary poetic description of this wonderful bird:
«Hummingbird snoot
Between the colors tirelessly —
She takes fragrant baths.
And having gained plenty of flavor and light,
She will fly away with a multi-colored rocket. ”

A photo of a hummingbird bird will complete an unusual look. Truly gorgeous tiny birds, their looks are breathtaking. Hummingbirds have an unusual long thin beak, usually the upper half of the beak slightly covers the lower part at the edges. The language of the small feathery is long and forked, they are able to significantly push the tongue out of the mouth. 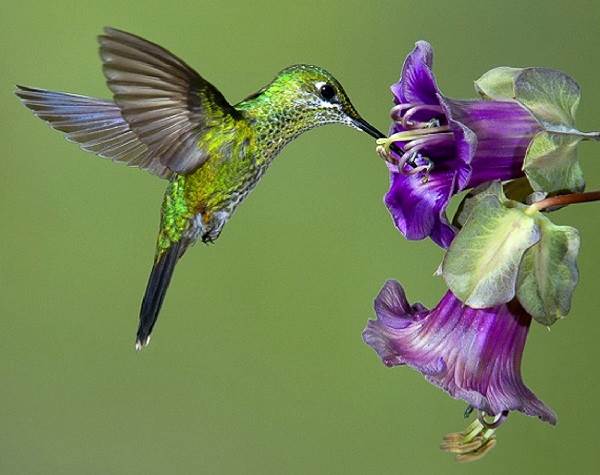 The wings of these little birds are long and sharp. They usually have 10, but sometimes there are also species with 9, large wing feathers and with only six short small feathers, which are almost completely hidden under the covering feathers.

Hummingbirds flap their wings very often, they do it so quickly that it is even impossible to see it, only the shadow of the movement is visible. They make about 50 strokes in one second, this is when the bird hangs in the air. But this is not the limit of their speed, in flight at maximum speed the bird can do 200 strokes.

Listen to the hummingbird’s voice

The flight speed of these “crumbs” also has record numbers among birds and is over 100 kilometers per hour. Unique hummingbird birds can fly in all directions: down, up, sideways, forward and even backwards.

In the air, they are able to perform real aerobatic maneuvers and do it so quickly that it is very difficult to keep track of their movements; a bright speck flashes before their eyes. The movement of the bird is accompanied by a characteristic humming, which occurs as a result of the friction of feathers against the air.

With such physical activities, the bird’s heart works at high speed, in a quiet state it makes about 500 beats, and during physical exertion, for example, speed flight, this figure increases more than twice and can reach 1500 beats per minute.

Hummingbird paws are very small, thin and weak, with claws, which makes them unsuitable for walking, so the birds never sit on the ground, they spend their entire lives in flight. Hence, another unique ability of this species of birds — the ability to hang in the air. 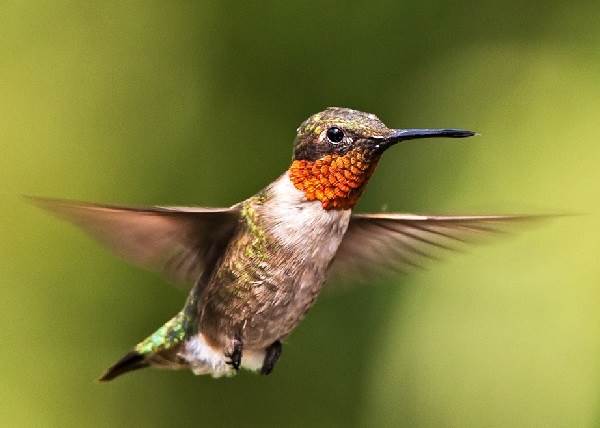 At such moments, the wings describe the figure eight in the air, thus maintaining balance and the hummingbird can remain stationary for a long time and “hang” in one place. Hummingbirds sleep like bats, falling into a state of anabiosis.

It is worth mentioning about another unique feature of the body of this bird — it is body temperature. During the movement of the hummingbird is warm-blooded, the body temperature reaches 42 degrees, but in the dark, when the birds sit on the branches, the body temperature drops sharply to 17 degrees Celsius, so the bird just freezes and waits for the dawn. Such a stupor occurs in the event of a shortage of food, which is very dangerous and can end in death if you do not warm up and feed the bird during it.

Hummingbirds are very unusual birds and this is manifested in absolutely everything. The behavior and nature of these birds is also unusual has a number of features. Hummingbirds are very mischievous, fast and playful, but at the same time they are very brave and even fearless. This is clearly seen during the hatching of chicks, when hummingbirds can attack birds of a much larger size than they do and fight fearlessly and bravely.

Hummingbirds are egoistic and lonely birds, although you can often find flocks of these birds, but in such a group each member is a bright individuality. They do not always get along peacefully with each other and sometimes there are serious conflicts and disagreements. 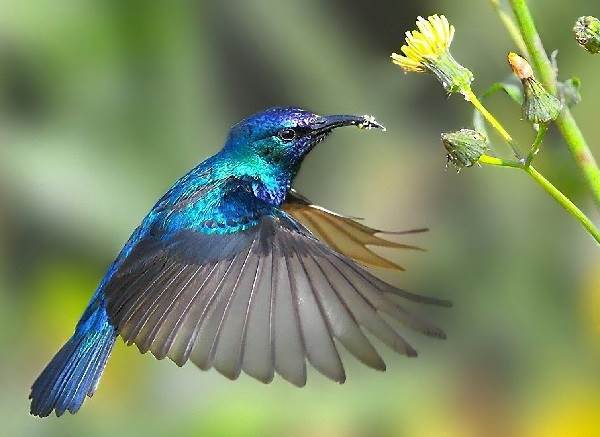 Man for small birds does not pose any threat, so often they build nests near the houses. Some lovers of beauty especially attract the attention of birds to their home and garden, planting their favorite hummingbird flowers and setting up drinking bowls with syrup or honey dissolved in water.

Thus, hummingbirds become regular guests and with enviable regularity fly to the house. Sometimes they behave like pets. Catching this bird is a very difficult task. Although it is possible to buy hummingbirds, but this makes no sense, since they themselves, under favorable conditions, are not averse to settling near your home. Hummingbird birds can sing, but this is more characteristic of the smallest hummingbird bees, while other birds emit weak chirping.

These birds are spread over a large area, they can inhabit both mountains and plains, and in some cases deserts. Some species occupy a large area, while others occupy only a small area, such as the top of a mountain.

The largest number of hummingbird birds lives in the western hemisphere, the largest number of them is found in the Amazon River region. It is known that birds that live in temperate latitudes migrate to warmer regions in the winter, making long flights to hot countries.

Most often, hummingbird birds live no more than 9 years, but during this time they are able to fly very large distances in total, which is also a kind of record among other bird species. In captivity, these birds live less, although the price of hummingbirds is very high.

This is due to the fact that it is very difficult to ensure proper conditions. In captivity, the birds feed exclusively on honey syrup. And for a full life, they need a varied diet, flowers and the ability to fly over considerable distances. Also very important for them is the ambient temperature. 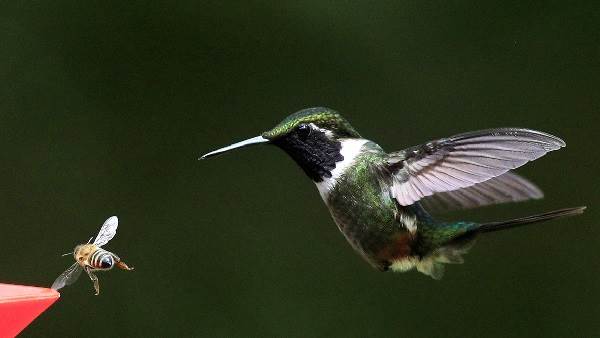 Care of the offspring falls on females. Couples these birds do not form. To begin with, the females weave nests, for this they use the best and most gentle plant and animal materials. The nest is made deep enough so that the female, sitting in it, as if hovering.

A nest is placed on a branch, less often at a fork in a branch, sometimes attached to a rock. Hummingbirds lay 2 eggs, very rarely there are cases when only one egg is in the nest. The egg itself in some species has a weight of only 2 grams.

Hummingbird hatching eggs for about 15 days, at least this period is 19 days. Then another 20-25 days chicks will live in the nest. Tiny hummingbirds are born without plumage and blind. Hummingbird mom brings nectar and pumps them chicks’ beaks.

The male does not take a special part in raising and caring for the chicks, however, some facts indicate that the pope still cares and protects the territory from possible danger.

Hummingbird feeding is not very diverse. Previously it was thought that the diet was only floral nectar, but later it turned out that such an opinion was erroneous. To extract nectar from a flower, a hummingbird flies close to it and hangs in the air next to it, then immerses its thin long beak into a flower and slightly opens it.

Sticking out his tubular tongue and swallowing the hummingbird, sucks nectar, which enters the poultry’s digestive system, which in turn consists of the mouth, esophagus and intestines. In addition to nectar, the hummingbird eats small insects, which it extracts on buds, leaves of plants, or finds them in cobwebs. For the digestion of insects involved the stomach of a hummingbird.

Hummingbirds need to absorb a large amount of food in order to be active and maintain body temperature, so the bird eats two times more food per day than its body weight, so they normally maintain their condition. Digestion and metabolism in the body occurs very quickly.