Peculiarities and habitat of iguana

An iguana is a large lizard belonging to the class of reptiles. Some species of these animals are of impressive size, reaching a length of just under two meters, and weights from 5 to 9 kg. 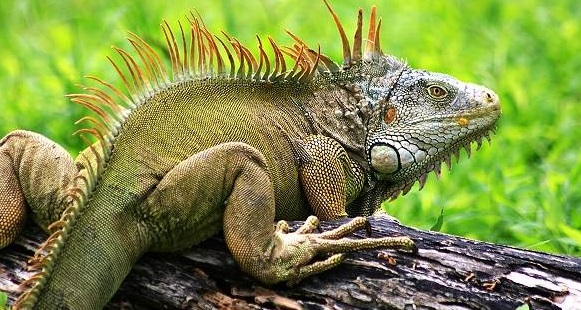 The features of the iguana include: skin-covered skin, as well as coarse folds, spines and thorns, and in some cases a sharp comb on the back, which (as seen in the photo of the iguana) gives the lizards an exotic look and makes them similar to prehistoric reptiles.

In size, scales may be very different, and the strongest of them cover the head of a lizard. The color of animals depends on the variety, as well as on many other reasons, having the ability to change depending on mood and even health. It can be like gloomy tones: gray or dark blue, green, as well as brighter shades: reddish orange and brown. 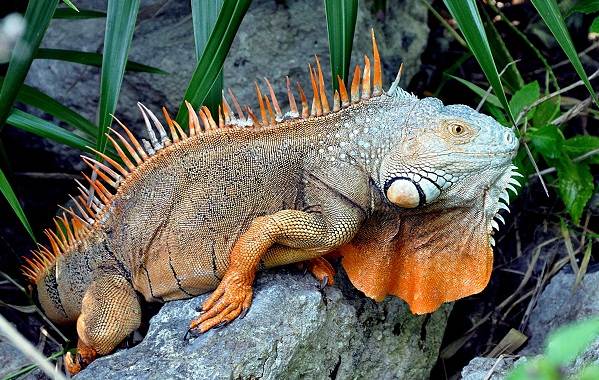 The blue spiny iguana has a length of less than 30 cm, white and black stripes are located on its neck, and the skin is covered with light spots. An iguana is an interesting animal, besides an impressive antediluvian species, it has many other amazing features.

In the lower eyelid of the reptile there is a transparent window allowing the iguana to see its surroundings even if the creature closes its eyes. And if an animal loses a tooth for some reason, it can grow new in this place. The iguanas have well-developed paws, and their fingers have claws. The language of many species of these animals is also unique and able to analyze smells.

Blue iguana is considered a very rare species of green.

These reptiles are inhabitants of the American continent, but iguanas also inhabit some tropical islands, preferring areas with a warm and humid climate.

The species of these reptiles are each adapted to their habitat. For example, an iguana that lives in trees has special hooks on its limbs, allowing it to freely climb trees. 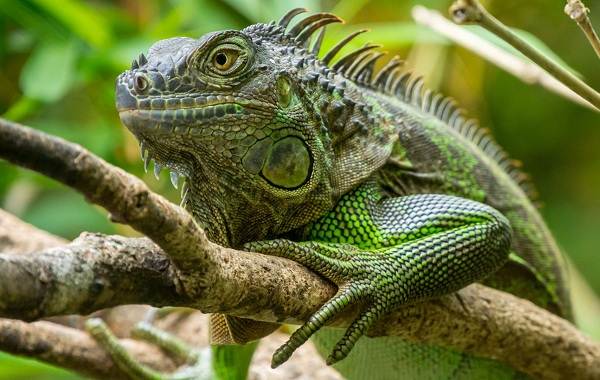 Sand iguana adapted, hiding from danger, burrowing in the sand, and with the highest speed. The marine iguana has special nasal glands, through which it gets rid of excess salt in the body. There are also rocky, semi-aquatic, steppe and other types of iguanas. Sand iguana 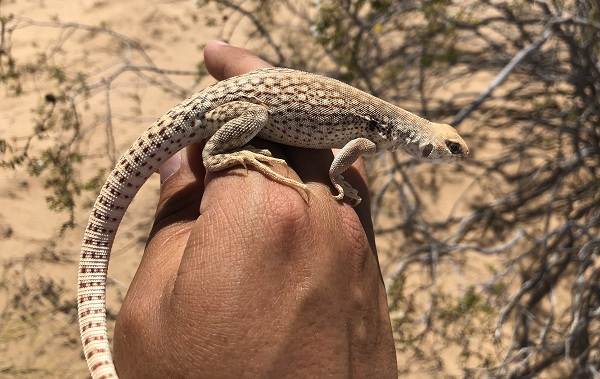 The nature and lifestyle of the iguana

Of the varieties of lizards, green and sea are the most impressive in size. Green iguana — huge dimensions of a reptile, is considered the largest representative of this species of animals.

It can be distinguished from others along the ridge of thorns, which runs along the entire length of her body, from head to tail. The life of this animal mainly takes place in the trees, and the lizard comes down from them only to fight with their own brethren over the territory that the iguanas protect with great ferocity and perseverance.

But the nature of these frightening-looking animals is not always so bad. The way of life of the iguana is quite peaceful, and this creature does not pose any particular danger. Green iguana is the largest representative of the species.

But she has enough cunning enemies. In nature, it can be foxes, large and birds of prey, as well as some species of snakes. But the most terrible enemies of these reptiles is a man who exterminates lizards because of the juicy meat and high-quality skin, which is convenient to use for making numerous types of haberdashery accessories and other items that are useful in everyday life and are elements of design.

Many species of iguanas are rather shy, and, settling near water bodies, in the event of even a small danger, are ready to jump headlong into the water. But the swimmers of them are skillful.

And, diving in, reptiles are able to hold out for half an hour without air. The sea iguana, more than its other congeners, successfully mastered the aquatic environment, feeling there no worse than a fish, deftly waving its tail and pressing its paws under itself. Marine iguana can be under water for up to half an hour

This variety also looks impressive, it can be up to 1 m 70 cm long, but it does not pose any danger, and simply loves salt baths. Some of the lizards are so peaceful, but give the opportunity to tame themselves.

And many lovers of the exotic contain similar reptiles at home. The blue iguana is a small-sized lizard that has an impressive, very beautiful color, as if attracting the gaze to itself. The price of an iguana is 25,000 rubles.

However, it is better to keep in mind that such a cute and harmless creature can give the owners a lot of trouble associated with the right content and accommodation. The animal can be purchased along with a terrarium for the iguana, which will provide it with the most comfortable conditions.

Keeping a cute little dragon at home is becoming more and more fashionable, so the number of people willing to keep large green iguanas is growing rapidly.

Caring for a home iguana involves daily warming up of the body with a special lamp, since this type of reptile, being cold-blooded, is accustomed to a tropical climate and is in dire need of following a strict temperature regime.

There is an opportunity to buy an iguana from a breeder, in nurseries, clubs of reptile lovers and through the Internet, in many cases also delivery of an animal is provided.

Mostly iguanas feed on plant food. Depending on the habitat, it can be cacti, various flowers and other plants. 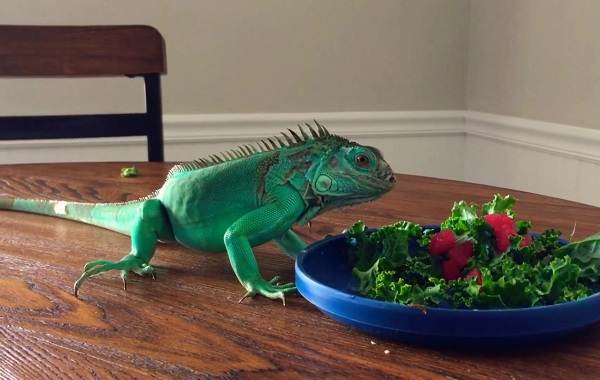 Home iguana is usually fed in the morning, and not eaten food is removed after a while so that it does not turn sour. Pets also need to regularly change the water and ensure that it is clean. Animals need not only plant nutrition.

However, the iguana diet at home requires sufficient calcium and phosphorus. It should consist of fruits and vegetables, as well as a certain amount of grain, greens and mineral additives. 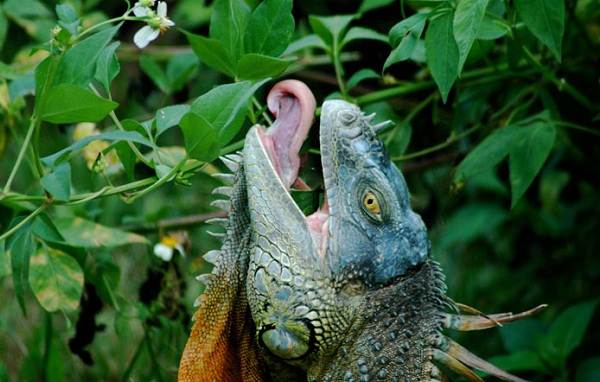 Reproduction and longevity of iguana

Animal species of iguanas differ in their breeding method. Mostly iguanas are egg-laying, but in special cases, some species are able to produce light and live cubs.

Green iguanas become capable of acquiring offspring at the age of two, in some cases three years. And the connection with their partner usually occurs in the autumn period. During the mating season, iguanas often show intolerance and aggression. 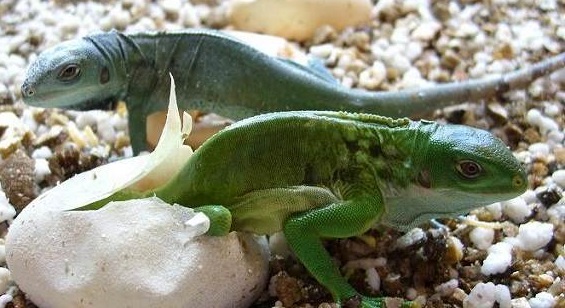 They are starting fierce battles with rivals for the attention of their chosen ones. Their actions are subject to certain laws and resemble a kind of ritual. Even the movements of animals are extremely interesting for their features. The males during the battles exchange signs between themselves: sharp blows with the tail and bows.

Future mother iguanas in the fight for offspring are also no less aggressive and decisive. Most species of these reptiles lay eggs in the ground, and in the struggle for a convenient territory for this they can fight with anyone. Cub iguanas 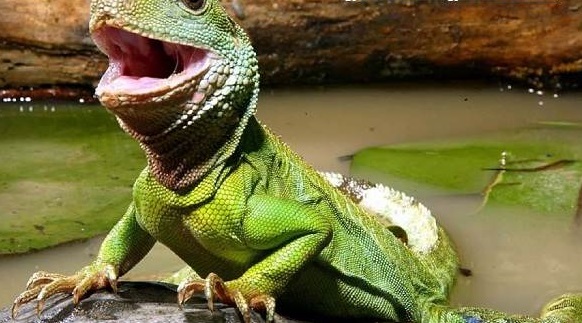 In one clutch there can be up to six eggs. And green iguanas often postpone them by several dozen. The cubs hatch in three months. Small reptiles constantly molt, but with age this process occurs less and less.

Iguanas can live up to ten, and at home maintenance, often up to 15 years. However, it is not at all easy to provide good care for such lizards. And sometimes it happens that animals do not live half the time limit. In most cases, this happens because of non-compliance with the temperature and correct diet.