Peculiarities and habitat of Indian cobra

The Indian cobra (from the Latin Naja naja) is a poisonous scaly snake from the family of asps, a kind of real cobra. This snake has a torso narrowing to the tail, 1.5-2 meters long, covered with scales.

Like all other species of Indian cobras, it has a hood that opens when this asp is excited. The hood is a kind of expansion of the body, which arises due to the expanding ribs under the influence of special muscles.

The color palette of the body of the cobra is quite variegated, but the main ones are shades of yellow, brown-gray, often sandy colors. Closer to the head there is a distinct pattern, resembling the contour of pince-nez or glasses, it is because of him that they call the Indian cobra the spectacle .

In addition to the above, there are several other very few subspecies. Often, the Indian royal cobra is also attributed to the Indian spectacle of a cobra , but it is a slightly different species, which has large sizes and some other differences, although it is very similar in appearance. 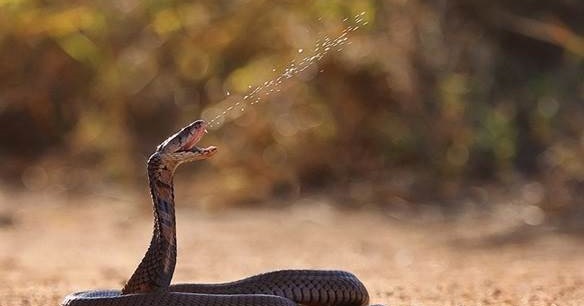 he Indian cobra, depending on the subspecies, lives in Africa, almost throughout Asia and, of course, on the Indian continent. On the territory of the former USSR, these cobras are distributed in the expanses of modern countries: Turkmenistan, Uzbekistan and Tajikistan — a subspecies of the Central Asian cobra lives here.

Chooses to live different areas from the jungle to the mountain ranges. On rocky terrain lives in crevices and various burrows. In China, often settle in the rice fields. 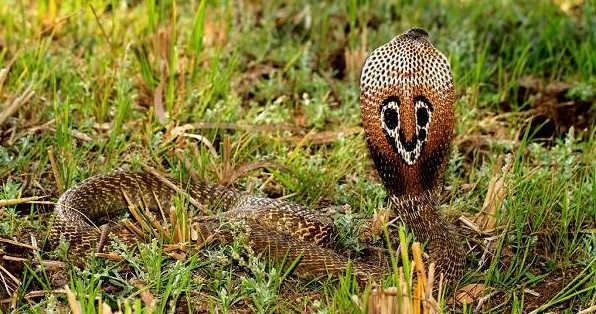 The nature and lifestyle of the Indian cobra

This species of poisonous snakes is not at all afraid of a person and can often settle near his housing or on fields cultivated for harvest. Often, Indian cobra Nay found in abandoned, dilapidated buildings.

This type of cobra just never attacks people, if it doesn’t see danger and aggression from them, it bites, injecting poison, only defending itself and, most often, not the cobra itself, but its ominous hiss serve as a scare.

Making the first shot, it is also called deceptive, the Indian cobra does not make a poisonous bite, but simply makes a header, as if warning that the next shot can be fatal. 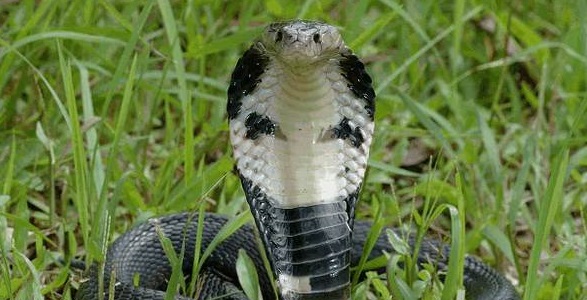 Practically, if the snake managed to inject poison when bitten, then the bitten had little chance of survival. One gram of Indian Cobra venom can kill over a hundred medium sized dogs.

Spitting cobra, as the subspecies of the Indian cobra is called, rarely bites at all. The method of its protection is based on the special structure of the canals of the teeth, along which poison is injected.

These channels are not located at the bottom of the teeth, but in their vertical plane and when a danger appears in the form of a predator, this snake splashes poison on it, at a distance of up to two meters, aiming at the eyes. Hit of poison in the shell of the eye leads to a burn of the cornea and the animal loses its clarity of vision, if the poison is not quickly washed off, then further complete blindness is possible.

It should be noted that the Indian cobra’s teeth are short, unlike other poisonous snakes and rather fragile, which often leads to their chipping and breaking off, but instead of spoiled teeth, new ones appear very quickly. 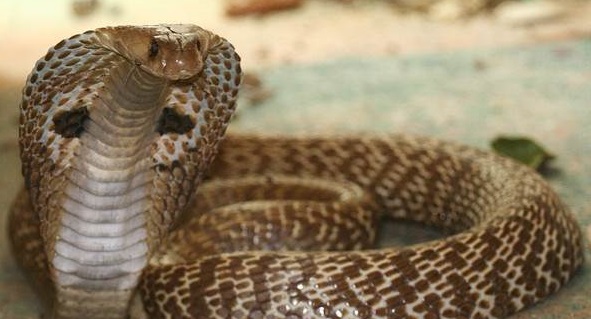 There are many cobras in India living in terrariums with humans. People train this species of snakes using the sounds of wind instruments, and they are happy to make various performances with their participation.

On the Internet you can find a lot of videos and photos of Indian cobra with a man who plays a pipe, makes this snake rise up on the tail, opening the hood and as if dancing to the sounding music.

Indians have a positive attitude to this species of snakes, considering them to be a national treasure. This nation has a lot of beliefs and epos associated with Indian cobra. On other continents, this asp is als 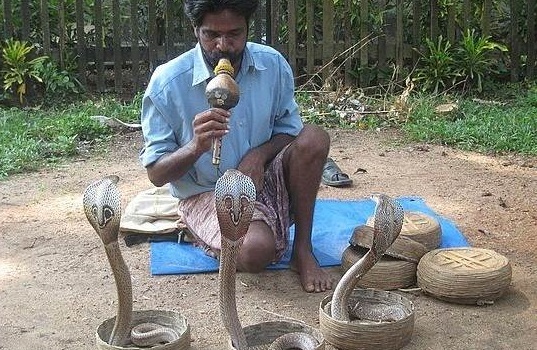 One of the most famous stories about the Indian Cobra is a fairy tale by the famous writer Rudyard Kipling called “Rikki-Tikki-Tavi”. It tells about the confrontation between the fearless little mongoose and the Indian cobra.

The Indian cobra, like most snakes, feeds on small mammals, mainly rodents and birds, as well as amphibian frogs and toads. Bird’s nests are often ravaged by eating eggs and chicks. Other species of reptiles, including smaller venomous snakes, also go on food.

A large Indian cobra can easily swallow a large rat or a small hare . For a long time, up to two weeks, a cobra can do without water, but finding a source drinks quite a lot, storing liquid for the future. 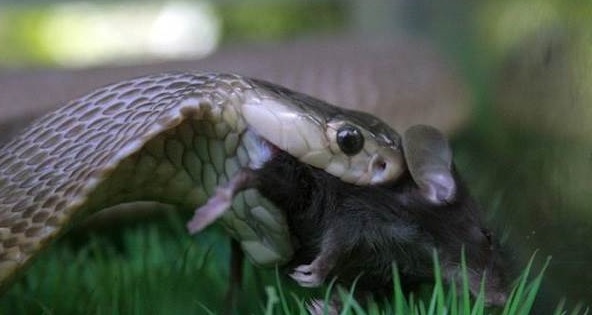 The Indian cobra, depending on the region of its habitat, hunts at different times of day and night. It can search for prey on the ground, in reservoirs and even on high vegetation. Outwardly clumsy, this kind of snake creeps perfectly in trees and swims in the water, looking for food for itself.

Reproduction and lifespan of Indian cobra

Sexual maturity in Indian cobras arises by the third year of life. The breeding season takes place in the winter in January and February. After 3-3.5 months, the female snake lays eggs in the nest.

Sandwich averages 10-20 eggs. This species of cobras does not incubate eggs, but after their laying they are constantly located near the nest, protecting their future offspring from external enemies.

After two months, the young serpent begin to hatch. Newborn babies, freed from the shell, can easily move independently and quickly leave their parents.

Given the fact that they are born poisonous at once, these snakes do not need special care, as they can protect themselves even from large animals. The life span of an Indian cobra varies from 20 to 30 years, depending on its habitat and the availability of sufficient food in these places.

Rabies in dogs: the first symptoms and signs, prevention and treatment