In our busy lives, not often, but they happen, the weekend. When you want to abstract from it all, turn on the TV. And see something resting, for example, the channel of nature, water world.

We offer the underwater Kingdom full of mysteries, tons of legends. Here is the shark swims past the sunken vessel. And here is a pack of fry rushing through countless corals.

Next, a strange creature, fish toli toli snake crawled out from the rock in search of prey. Crampfish, waving his wings-fins, sailed on the water. Cancer hermit, for some reason, all the time, somewhere walking backwards. 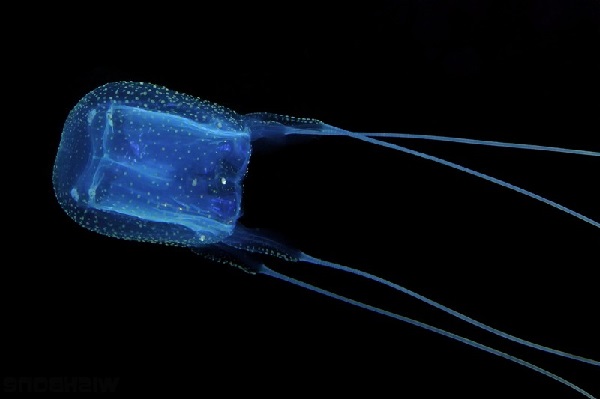 How would like all to know where they live, where they live and how. How they manage such a variety of creatures for thousands of years to coexist with each other.

And jellyfish, which they just did not happen. They exist on our earth for millions of years. Their great-great-great mother is the mythical Medusa, that’s why they’re called jellyfish.

There is a huge individual, two and a half meters in length, and there are quite microscopic babies. With its unique beauty, no one being can’t be like them.

Colorful, with a variety of patterns on their heads, with tentacles suction cups. In the form of domes or just a round pill. Their hats decorated with the red, blue, light blue, orange colors, a variety of geometric shapes.

These creatures are at first glance so helpless. After all, if you bring the jellyfish ashore and leave in the sun, in a short time it will not. She just melted and spread. But at the same time, they are insidious.

With poisonous tentacles, jellyfish are protected, and they sting at the slightest opportunity. The minimum damage they can cause to the human body is a natural burn mark on the skin.

Exactly how hot. Well, maximum damage to man – death. And very wrong opinion, thinking, the more jellyfish, the worse and more poisonous. Nothing of the sort. There is little species that in the water is almost not visible, but its poison is deadly. And the killer irukandji jellyfish. 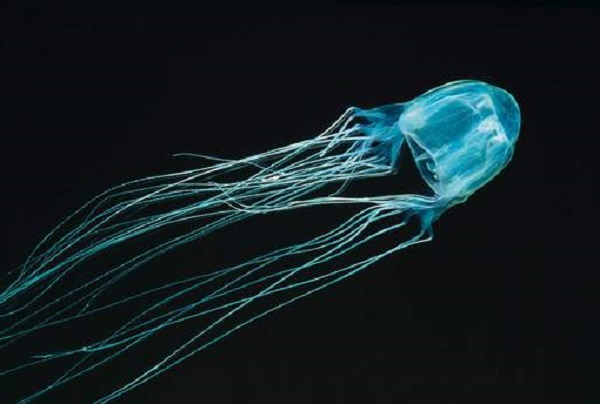 Back in the fifties of the last century, Australian fishermen had discovered a hitherto unknown disease. Returning from fishing, they experienced severe illness. And some of them even could not stand the pain, dying in terrible agony.

All this was witnessed the scientist-naturalist G. Flecker. Which, as a result, suggested that perhaps all fishermen stings and poisons to anyone unknown tiny creature, presumably a jellyfish. And, in absentia, gave her the name «irukandji«. The so-called at that time the tribe which was sick and dying fishermen.

In the sixties, a doctor and a scientist – D. Barnes decided to study thoroughly this theory definitively confirm or refute. Armed with a special suit, he went to explore the depths of water.

It took him one day to study the sea bottom. And when it was lost the last hope, quite by chance, his field of vision got a little «something», with long tentacles.

Before, he maybe just didn’t notice, didn’t pay attention to the irukandji. The doctor picked up the find, and on land decided to conduct an experiment. And okay, if only for myself.

He even hooked the son, and the other, poisoned each tentacle of the jellyfish. He did it in order to understand fully how strong the poison of this creature, and how it works. The result was not long in coming. All three were in intensive care.

Description and features of irukandji jellyfish

Irukandji refers to the Pacific group of jellyfish. They are incredibly poisonous. And their poison more than a hundred times stronger and more destructive venom of any Cobra. And a thousand times the toxicity of the Scorpion. 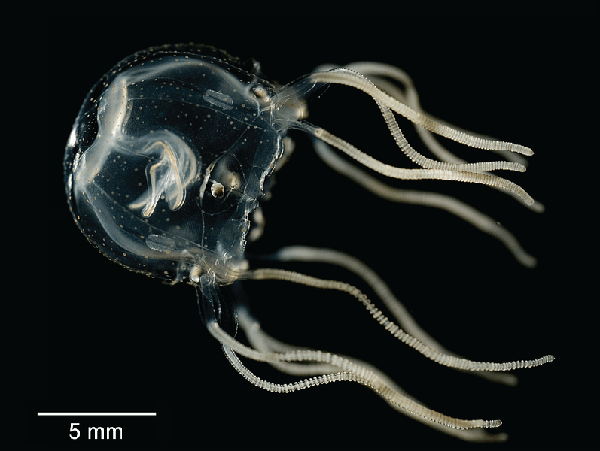 Man does not kill on the spot only for the reason that the whole of it, the Medusa injects. But only a minimal amount. If she had a sting like bees or wasps, the consequences were much worse.

Looking at photos irukandji, you can clearly see how invisible it is in the water. As a transparent thimble with long tentacles. Size irukandji no more than two inches. Completely transparent as ninety percent water. The remaining ten percent of the structure of her body to have salt and protein.

The tentacles themselves can be two millimeters and more than seventy – and eighty inches, as the strings stretch over the body. Throughout their length located stinging cells. They are filled with a protective toxic substance. Themselves capsules of poison is painted in red color, in the form of dots.

It differs from other jellyfish in that tentacle-only four strings. In other species there are many more, sometimes more than fifty. She has eyes and a mouth. But as Irukandji is practically not studied specimen, it is hard to say that she had a vision. We only know one thing, it reacts on light and shadow.

Stung, gradually, injecting the particles contaminates the fluid. So its bite is not audible. Only after a time begins to numb the affected area. Then the pain wanes.

Coming migraine attacks. The human body is profusely sweating. Then the total disorder of the gastrointestinal tract. Acute back pain and spasms of the muscle tissues turning into chest pain. 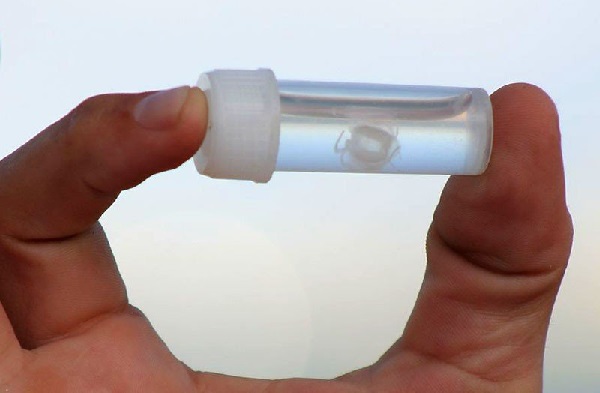 Starts tachycardia, panic attacks, fear. Rises blood pressure. A person becomes hard to breathe. It all can last for days. The worst thing is that no vaccine against the bite of the jellyfish has not yet been invented.

Therefore, the person who is in hospital with these symptoms, help is only a potent analgesic. For healthy people have a chance to stay alive after the «shake hands» irukandji.

But those who suffer from hypertension, or people with various diseases of the cardiovascular system, with increased pain or Vice, doomed. In medicine even there is a special term for this disease syndrome irukandji.

Poison in a tiny killer so that they kill more than forty people. In history there are cases, hundreds of them, loss of life after an unexpected meeting with Medusa.

Until recently, jellyfish irukandji lived exclusively in the water expanses of Australia. It can be seen at a depth of ten meters and more. These unusual animals, mostly live only in warm water, and never left the familiar area of their habitat. Now, in our days, there is evidence of occurrence of jellyfish on the shores of America, Asia. There were witnesses who encountered her in the Red sea.

Most of my free time, the jellyfish drifts in the water, following the current. But come and the hours when you need something to make money. And here for go its toxic tentacles. 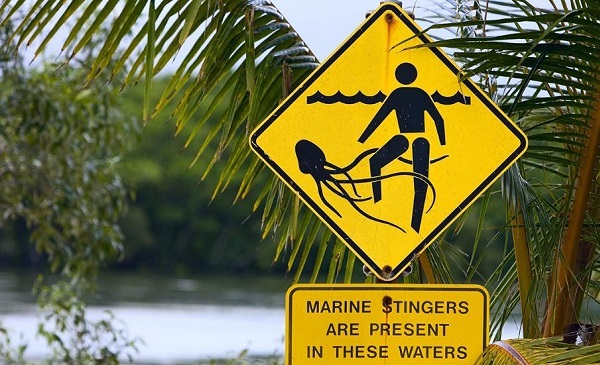 Unsuspecting plankton, swim ease. Irukandji is powered only by them. Jellyfish stuck in them, their harpoon and injects a toxic substance. Plangtona paralyzed. Then, these tentacles it lifts the victim to the mouth and eats.

Scientists, oceanographers yet not reliably studied, and how much live jellyfish irukandji. And knowledge about reproduction is also estimated. Most likely, this is like the other species of jellyfish.

The egg is fertilized in the water. To that produced male and female sex cell. After fertilization, the egg is transformed into a larva, and for some time floats freely in the ocean. After, in the form of a polyp, sinks to the bottom of the reservoir. He is able to walk on a solid surface. After a time, the polyp divides into microscopic babies. 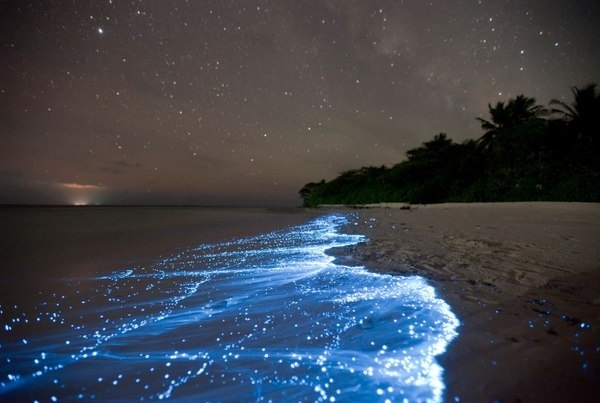 In the desire to unite with the waters of the ocean, scuba dive or simply deep-sea diving. Remember that these people are the first are at risk. So be alert, observe all safety precautions and enjoy an unforgettable beauty. They are like no other, fill your body with endorphins of happiness.