Due to its impressive size, the Kamchatka crab has a different name – «Royal». This inhabitant of the sea depths is a very interesting biological species, if you look at it from the economic side. The king crab has an extensive habitat and is found everywhere.

What is interesting about this animal?

Taking into account the classification in the field of Zoology, Kamchatka arthropods are a direct relative of hermit crabs. The key distinguishing feature of the king crab is the presence of a fifth pair of walking legs, which are reduced and hide under the shell. Females have a specific abdomen with shields of their chitin, which has an irregular asymmetric shape.

Previously, the shortened pair of legs in hermit crabs was designed to provide stability when holding the shell. Evolution has eliminated this need, so today 5 pairs of king crab legs are used only for cleaning the respiratory system. The Kamchatka crab moves along the bottom using 4 pairs of limbs that move alternately.

The abdomen is bent, slightly shortened. There are small plates and microscopic legs arranged in an asymmetric order. It is this feature that distinguishes these arthropods from species that have a spiral-shaped abdomen. Touch and smell are provided by the presence of special antennas in the front. They are equipped with special cylinders with high sensitivity. This feature helps the Kamchatka crab to find and choose the best food for food. 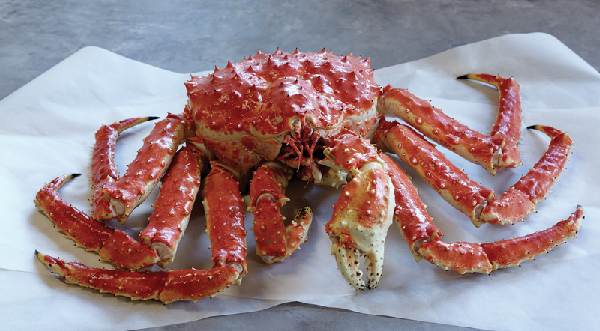 During growth, the skeleton frame changes in individuals, and molting is performed. The highest frequency of changes is observed during the development of larvae, and in adults it occurs no more than 2 times a year. The frequency of molting is regulated by specific glands located on the eye stalks. Before the old frame is dropped, the soft tissues of the crab are already covered with a slightly compacted shell. It is worth noting that the average life expectancy can reach about twenty years.

What is interesting about the appearance of a crab?

The body of such an animal consists of 2 main parts – the cephalothorax and the abdomen. The first is under a strong shell, and the second is curved under the cephalothorax. The crab’s eyeballs are protected by an overhanging carapace or beak-shaped bend. On the carpax there are spiked needles designed for protection – above the heart (6 PCs.) and near the stomach (11 PCs.).

In addition to the protective function, the carapace is used as a support and exoskeleton. It is to it that the muscle fibers are fixed from the inside, allowing the crab to move freely. There are gills on the sides of the carapace.

The nervous system is a chain of interconnected nerve endings. They are located at the bottom of the cephalothorax and abdomen. The heart of the animal is located in the back, and the stomach is located in the front.

A very interesting feature is that the crab’s claws are designed to perform various functions. With the help of the left claw, the animal cuts soft elements for food, and with the right claw (it has a large size) – hard. 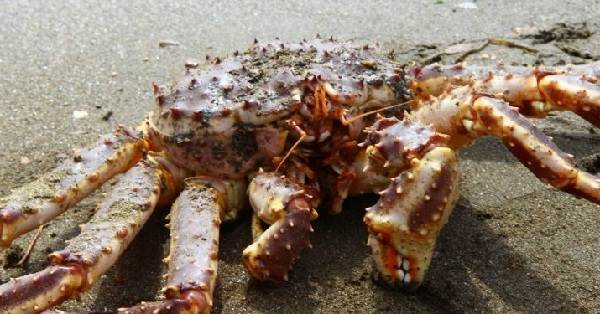 Males have a body width of 16-25 centimeters and can reach a weight of about seven kilograms. Females have smaller sizes – the body is up to 15 cm, the average weight is 4 kg.
This crab is notable for its red-brown hue, and there are purple spots on the sides. At the bottom, the animal can have all sorts of shades – from pale white to slightly yellowish (depending on the area of residence).

Where does this crab live?

You can meet this very large animal in many seas. The main area is located in the regions located in the North and far East. Often, the Royal arthropod is found in the depths of the Japanese, Okhotsk, Bering sea, near the Shantar/Kuril Islands, etc.

In 1932, these animals were launched into the Barents sea, but only in 1974 they managed to catch the grown-up individuals. Now the population has grown significantly. The crab is often found near the coast of Norway, in the North of Svalbard, etc.

According to rough estimates, as of 2006, about one hundred million individuals lived in the Barents sea. They prefer to live at different depths, the bottom can be either sandy or with a high content of silt.

What is interesting about animal life?

This arthropod leads a very active lifestyle. It is constantly migrating, moving over considerable distances. It is worth noting that the path of the Kamchatka crab is the same (it follows a certain route), and the approximate speed of movement is 1.5 km/h. Animals can move forward or sideways, but they can’t hide in the bottom sand.

With the onset of the cold season, the king crab goes to a depth of more than 200 meters (sometimes about 270 m), and when warming returns to shallow water. The molt lasts about three days. At this time, the king crab does not show itself, preferring to hide in cracks in the rocks and in all sorts of holes. When molting occurs in females, males carefully guard them. 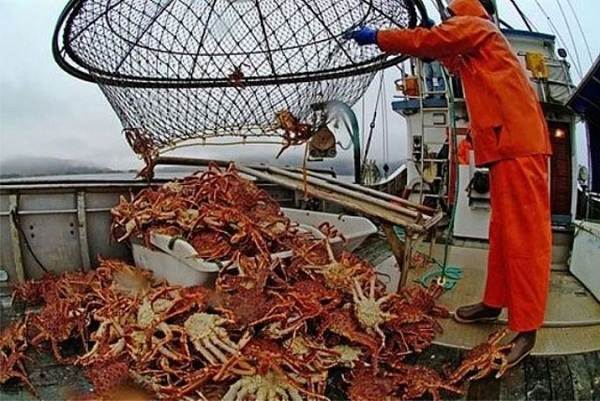 When molting, not only the chitinous cover changes. The lining of the stomach, heart, tendons, and digestive system is replaced. This leads to the fact that the king crab is almost completely updated every year, able to gain a new mass.

The main diet of the Kamchatka crab is hedgehogs, shellfish, worms, stars, various types of fish, plankton, and various types of crustaceans. It should be noted that this arthropod is an omnivorous predatory inhabitant. Young individuals of the Kamchatka crab prefer to feed on hydroids. The claw on the right side of the animal is designed to destroy the hard shell, and using the left claw, the crab eats soft and tender internal components.

There is simply no official division of such animals. They are conditionally divided according to their territorial purpose:
• The width of the carapace of arthropods living off the coast of Canada is about 29 cm. These animals have large claws.
• Crabs from the Barents sea are medium-sized. They have the width of the tubular region is not more than 25 cm.
• The smallest Kamchatka crabs live in the sea of Okhotsk and the sea of Japan. The width of the shell is less than 20 centimeters.

The far Eastern waters are home to many types of crabs that are available for humans to catch. For example, the most popular is the crab-strigun Byrd. It is small in size and weighs about one kilogram. The size of the carapace in this variety is about 15 cm.

The cost of Kamchatka crab also differs significantly. Consumers have the opportunity to purchase both whole and live animals, as well as frozen ones. Available on the market phalanges and claws, ready meals and just have meat. The cost at the catch site will be significantly lower than in the regions where delivery is carried out. For example, one live crab will cost about 10,000 Russian rubles.

Meat is popular and has a beneficial effect on the human body due to the presence of a large number of vitamins and trace elements. Eating crabs is useful in the presence of diseases of the visual organs, to normalize the heart and metabolic processes in the body.

How does the crab reproduce?

As soon as the spring season comes, the males go to shallow water. Females also move in a similar direction, but in small groups. They are already carrying Mature eggs on legs near the abdomen. At a shallow depth, the larvae are fertilized, which are carried away by the current. At this point, the females have already formed new eggs, which at that time is ready for fertilization.

With the arrival of the molting period, male and female individuals are brought closer together in a peculiar way. They take a pose – the male with pincers holds the female (the movement resembles a handshake). Retention is carried out until the molting process is completed. In some cases, the male helps the female get rid of the old frame. 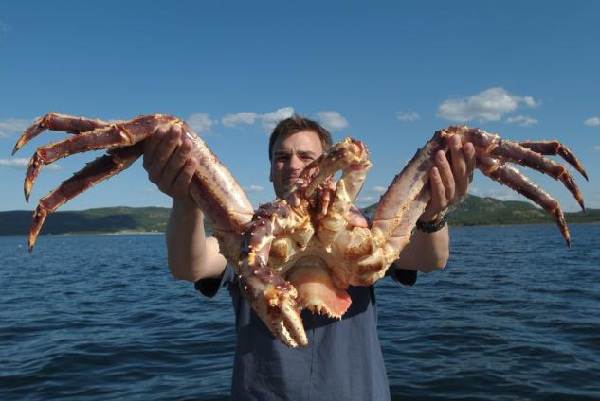 As soon as the molt comes to the final stage (it lasts 3-5 days), the male throws out the tape with the sex cells. It is attached to the female’s legs. After that, the male leaves and also starts molting.
After a few hours or days, the female begins to throw eggs.

It is worth noting that the female spawns only once a year. Males, in turn, can mate with a pair of females in 12 months. After the larvae hatch, they are carried downstream in the water column for about 2 months. This stage leads to the death of almost 95% of the larvae. The surviving individuals sink to the bottom in the thickness of algae, then develop. The crab’s migration begins at about five years of age.

What enemies does the king crab have?

Adults of this animal have almost no enemies. This is due to the fact that the animal has excellent protection in the form of a reliable and durable shell. It is additionally covered with special sharp needles in the form of spikes. Only large mammals can destroy this protection. Young individuals have much more enemies. The most popular ones include:
• Predatory fish.
• Cod.
• Halibut’s.
• Sea otter.
• Octopuses’.
• Bychkov.
• Other types of large arthropods.

During molting, the king crab is as vulnerable as possible, so it is forced to hide. A person cannot be classified as an enemy from the natural environment. Given the fact that in recent years, the uncontrolled catch of such animals has become more frequent, a person has every chance to become the number one enemy.

Today, the state has established special quotas that determine the rate of catch of arthropods. This is organized for the purpose of careful use of the population, so as not to undermine their numbers and not «knock down» the ability to restore manipulations.

Humans can have a negative impact on all marine inhabitants, and the Royal arthropod is no exception to the rule. Waste from industrial enterprises, plastics and petroleum products are constantly dumped into the seas/oceans/rivers. They pollute the seas/oceans and have a bad effect on flora and fauna. That is why many species of marine life are on the verge of extinction.

How is king crab prepared?

Dishes that contain crab meat are widely popular in different countries of the world. When preparing them, it is recommended to take into account some nuances:
• The most delicious is the king crab, which is cooked alive. Pre-frozen meat ingredients will not be so tender.
• The meat component of the king crab has a very subtle taste. That is why spices can quickly kill it. You can use celery, Bay leaf, salt, Apple cider vinegar and black pepper to emphasize the refined aroma. Do not overdo it, it is recommended to use a moderate amount.
• The main feature in the course of cooking is the elimination of the probability of overcooking Kamchatka crab. If you boil meat for a long period of time, it will definitely become rubbery. The cooking time should be calculated taking into account the weight of the Kamchatka crab. For the first 0.5 kg, 15 minutes is enough, and for the next 0.5 kg – about ten minutes.
• When taking the crab out of the pan, it is recommended to lay it back down. This will eliminate the possibility of juice leakage. After cooking, it will continue to be absorbed into the meat.

King crab can be consumed separately, as part of salads or as a filling when stuffing chicken. Meat is optimally combined with mushrooms or Italian pasta.