From the point of view of zoology, crabs and crayfish belong to the same species. These animals have their own categories of definition and their own hierarchy. And among them there are also giants, which is the Kamchatka crab , which, despite the name, is considered to be hermit crab. 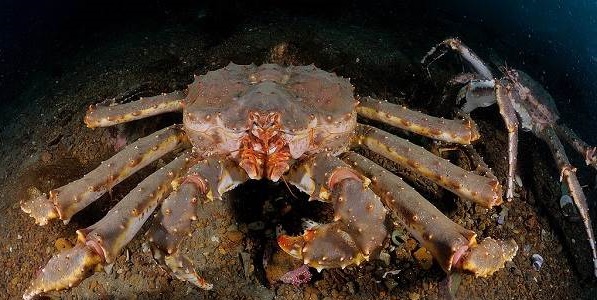 The appearance of the king crab is really very similar to other crabs , but still the animal belongs to the crabeids and is distinguishable primarily by the reduced fifth pair of legs.

It is one of the largest representatives of its species, belonging to the family Lithodidae. The adult size of the Kamchatka male crab reaches 25 cm in width of the cephalothorax and 150 cm in width of the legs, weighing 7.5 kg. Females are smaller, weigh about 4.3 kg.

The body of a crab consists of a cephalothorae, which is under the common shell, and an abdomen. The abdomen, or abdomen, is folded under the chest. The armor in the region of the heart and the stomach is equipped with sharp spikes, which are above the heart 6, and above the stomach 11. 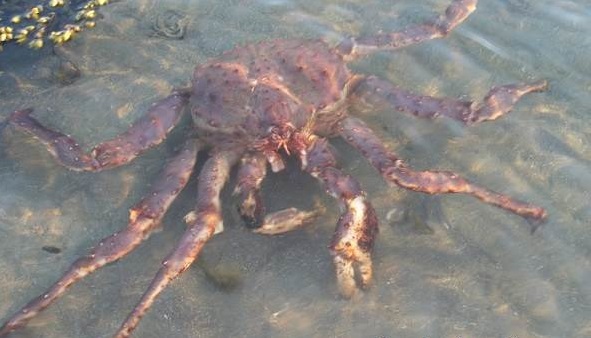 Kamchatka crab in the photo

Thus, it protects the soft body of cancer, and at the same time is a support for the muscles, as the animal has no skeleton. On the sides of the shell are the gills.

On the front of the shell there are protruding growths that protect the eyes. The entire nerve chain is located on the lower side of the body. The stomach is located in the head of the body, and the heart in the back.

The Kamchatka crab has five pairs of limbs , four of which are walking, and the fifth is used to clean the gills. The claws of the Kamchatka crab each have their own purpose — with the right it breaks the hard shells and crushes the hedgehogs, with the left it cuts softer food. 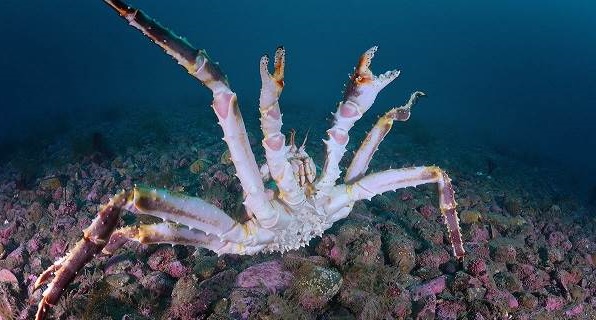 The female can be distinguished by a more round abdomen structure, which is almost triangular in the male. The color of the body and legs of the crab is red-brown from above, and yellowish from below. On the sides are purple spots. Some individuals are painted brighter, the appearance of the Kamchatka crab can be estimated from the photo .

Habitat of the Kamchatka crab

This large animal lives in many seas. The main range is in the Far Eastern region and the northern areas of the seas washing it. So dwells a crab in the Sea of ​​Japan, the Sea of ​​Okhotsk, the Bering Sea. It inhabits the Bristol Bay. The area is concentrated near the Shantarsky and Kuril Islands, Sakhalin and most of all on Kamchatka.

Kamchatka crab induced in the Barents Sea. The process was long and complicated, which began theoretically back in 1932. Only in 1960 for the first time it was possible to transport adult individuals from the Far East. 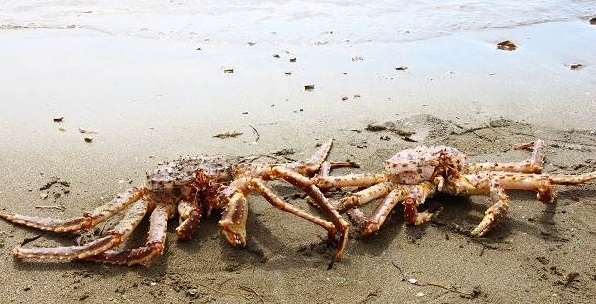 In the period from 1961 to 1969, the bulk of crabs were brought, mainly using air transport. And in 1974 for the first time caught a crab in the Barents Sea. Since 1977, they began to catch these animals off the coast of Norway.

At the moment, the population has grown much, the crab has spread along the coast of Norway to the south-west, as well as north to Spitsbergen. For 2006, the number of crab in the Barents Sea was estimated at 100 million individuals. The crab lives at a depth of 5 to 250 meters, on a flat sandy or muddy bottom.

The Kamchatka crab leads a rather active lifestyle, it constantly migrates. But his path is always built along the same route. The speed of movement is up to 1.8 km / h. Crab walk forward or sideways. Do not know how to dig into the ground. 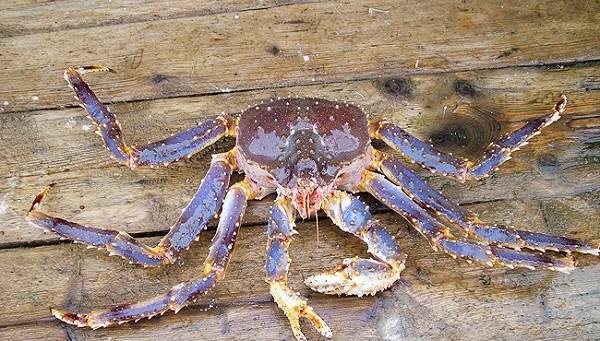 In the photo is a blue Kamchatka crab

In cold periods, the crab goes deep to the bottom, drops to 200-270 meters. With the advent of heat, it rises into the warm upper layers of water. Females and fry live in shallow water, the males move a little deeper, to where there is more food.

Once a year, an adult Kamchatka crab sheds, dropping the old shell. By the time of the descent of the old cover, under it already grows a new, soft yet, armor. The process of molting takes about three days, during which the crab does not like to appear on the eyes and hides in the pits and rock crevices. «Naked» females are protected by males.

Molting at the «stronger sex» takes place later, around May, when the water temperature reaches 2-7 С. In addition to the chitinous coat, the animal also changes the outer shells of the heart, stomach, esophagus and tendon. Thus, the animal annually almost completely updated and gaining new mass. 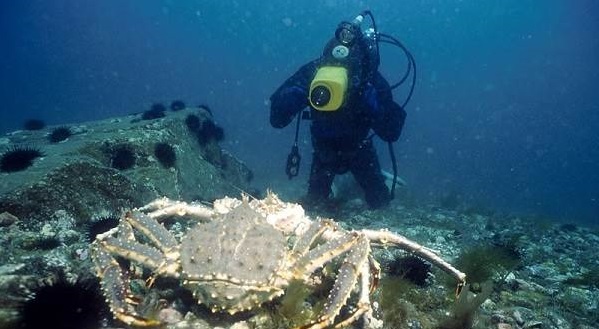 Young animals molt frequently — up to 12 times in the first year of life, 6-7 times in the second year and then only two times. Upon reaching the age of nine years, the crabs become adults and molt only once a year, and the old 13-year-old individuals only once every two years.

In the Far Eastern seas, there are many species of crabs available for catching. In these parts you can buy Kamchatka crab or any other. 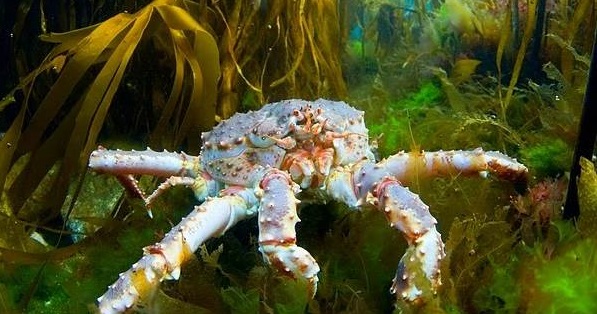 The crab of the strigoon Byrd is a smaller species, sometimes it can mate and give hybrids with a crab with a snow stripe. These species weigh up to about 1 kg. and have a size of carakaps about 15 cm. In the Japanese Sea there is a red snow crab. This is a small animal on average 10-15 cm. Named for its bright scarlet color.

Prices on the king crab vary, you can buy a whole crab, live or frozen. It is possible to purchase phalanx of Kamchatka crab, claws — in and without armor, meat and various ready-made dishes from it. The cost at the catch sites is much lower than with the delivery to the regions. The price of a live crab is about 10,000 rubles.

Kamchatka crab meat is very valuable for the whole body due to the presence of vitamins and trace elements in it. It is useful for vision, strengthening the cardiovascular system and the general improvement of the state of the body. 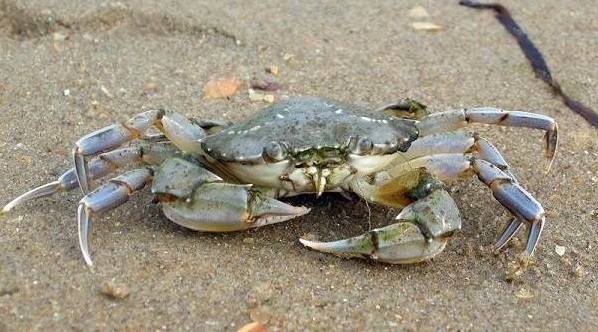 Reproduction and life expectancy of the Kamchatka crab

During the spring migration, females carry eggs with germs on their abdominal legs, and in the ovaries they have a new batch of not yet fertilized eggs. On the way to the shallow water, larvae hatch from the external calf.

Further samochki and males meet, molting occurs. The male helps the female to get rid of the old shell, and when this happens, he attaches a tape of spermatophores to her walking legs, and then goes to the depth to feed.

The female spawn eggs and liquid to activate spermatophores. The number of eggs reaches 300 thousand. Eggs are attached to the abdominal legs of the female, which she constantly moves, washing the eggs with fresh water. During the warm season, the eggs develop, but for the winter they stop and the growth is activated again only in spring, during the period of migration and warming of the water. 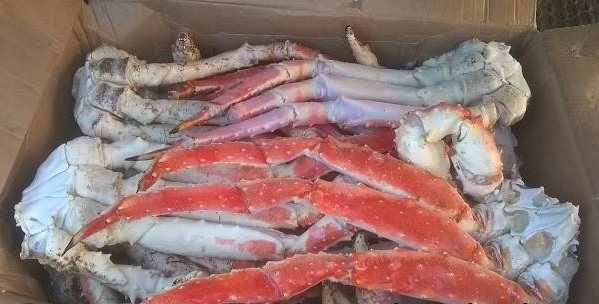 In the photo claws of king crab

The larvae hatch completely different from crabs — they are oblong creatures with a long belly, without legs. About two months of the larvae carries over the seas during this period, they manage to shed four times.

Then they sink to the bottom, molt for the fifth time, and even then they acquire legs, armor and their abdomen becomes much shorter. After another 20 days, the larva again sheds, and so it goes on all summer and autumn.

Animals grow quickly, with each molt becoming more and more like their parents. The first 5-7 years old crabs live in one place and only then begin to migrate. In the eighth year of life, female crab become sexually mature, in 10 years males are ready for breeding. Kamchatka crab lives very long — about 15-20 years.