Features of breed and character

The Karelian bear dog treats the hunting. In ancient times it went under the gun to large animals. The homeland of dogs Finland where these dogs are regarded as national pride is considered. After at the beginning of the XX century this Scandinavian country gained independence, the part of Karelia departed to the Soviet Union. So breed was split on the Karelian bear and Russian-European laika. 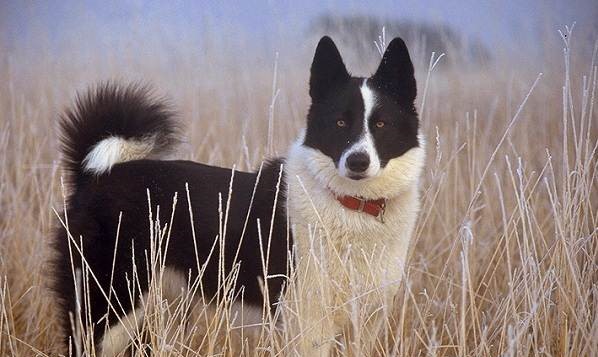 The history of breed totals some tens of thousands of years. Archeologists note that the dogs similar to the Karelian lived in Scandinavia still before there Vikings came. Judging by a huge number of remains, they were very popular. Often it is possible to find in burials at the same time a skeleton of an animal and the person.

In character there is such line as aggression. By the way, the animal is considered in Russia especially dangerous breed. The dog shows aggression to everything that considers as the production, and also to other dogs. Mistrustful to strangers, the canine friend doesn’t snatch on them, and behaves frostily. With relatives is on a good footing at all — it is tender and gentle.

Among laiek it is considered the best hunter. Thus differs in unpretentiousness and endurance. Difficult temper demands a skilled hand therefore the dog won’t suit beginners. Doesn’t perceive hails and abuse at all. It is necessary to communicate validly, as equals. 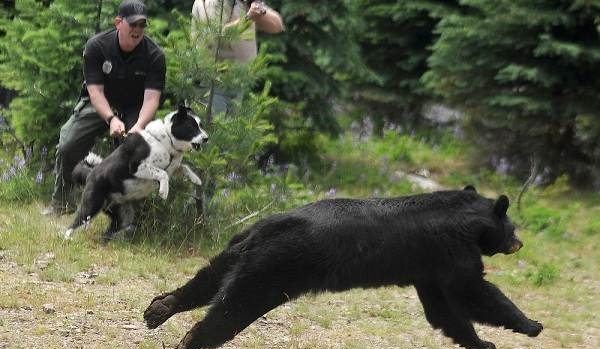 The Karelian bear dog was brought for hunting for bears

The dog is inclined to domination and independence. You shouldn’t limit it. However during walks it is better to keep an animal on a lead in public places.

The Karelian bear dog on a photo reminds the relative — the Russian-European laika because of a similar color. However in reality of breed differ. The Karelian has average dimensions with developed, but not heavy frame, good muscles. With a growth to 60 cm dogs weigh to 28 kg. Height in withers at a bough shouldn’t exceed 55 cm, and weight — 20 kg.

The animal has the head which is visually reminding a triangle. The forehead wide, a nape is maleficiated, and a dividing mezhbrovny strip the weakest. Stop sloping, however the noticeable. The equal back of a nose is narrowed to a lobe with black pigmentation. 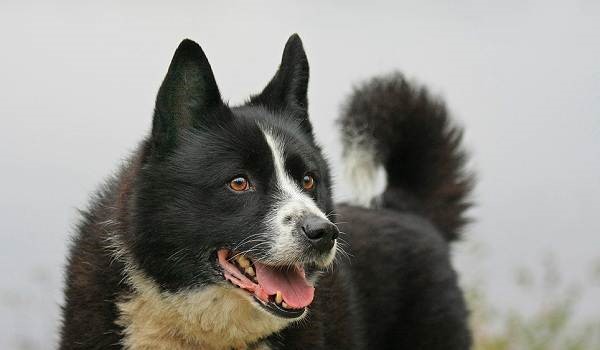 Lips are densely closed, adjoin to an equal number of the teeth closed in a nozhnitseobrazny bite. The dog looks at the world round brown eyes of the average size. The shade can vary from nut tones to the almost black. The look of the pet is expressive, clever, guarded.

Small ears have wide post-avatars, look forward. Tips are rounded slightly off. A body thickset, a neck brawny, with low landing. The breast volume, is low lowered. Groins are picked well up, but dry don’t look. The tail usually has natural length, is dashingly bent in a ring, will throw on a back.

Wool has ostevy a hair and an underfur, thin and rare. However it doesn’t prevent it to cope with protective functions successfully. The bronze-black coloring with white marks on a muzzle, paws, a breast, a tail and a stomach is admissible. 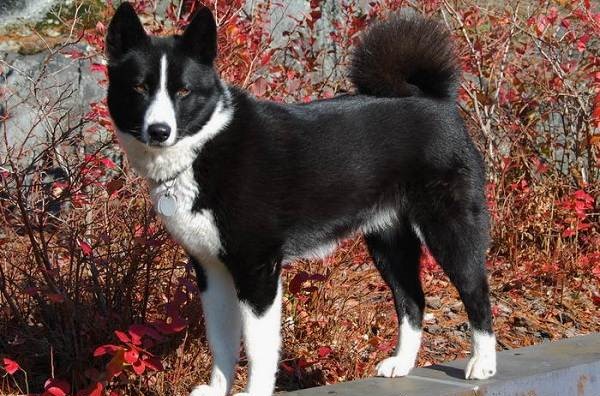 Hair of a bear dog perfectly protects it from cold

The breed of dog the Karelian bear isn’t suitable for city apartments. The animal needs a scope and good physical activity, provide which only accommodation conditions in the country can.

One of the most successful options — the open-air cage. However, considering dislike of a dog for restriction of space and freedom, it has to be spacious and warm. Wool should be combed out every day and when the dog fades, to use special pukhoder. By the way, this breed has no dog smell.

Time in some days a dog demands survey of ears, eyes, a nose. From time to time ears should be cleaned solution of boric alcohol. Also it is worth watching paws. Quite often small pillows are injured. Not obligatory to cut the pet, and it is recommended to bathe only when the dog participates in exhibitions. But vaccination has to be regular. 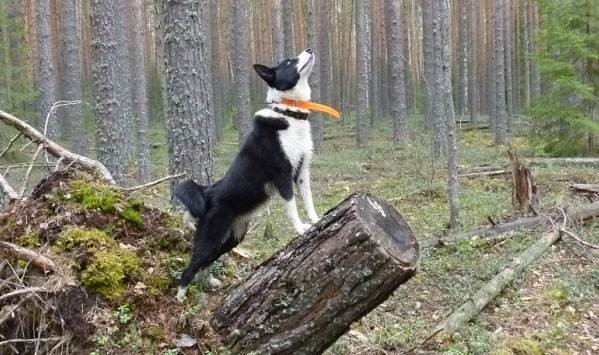 Breed is characterized by not too big appetite. Taking into account large dimensions It should be noted that dogs eat not so much. Thus in relation to them the same laws, as concerning other breeds are observed.

For example, puppies of the Karelian bear dog eat to 5 times a day from 2 to 4 months. Gradually the number of feedings decreases and by 12 months two portions per day are enough for a dog.

The menu is standard: in a basis animal protein, as addition — difficult carbohydrates, cellulose, sour-milk products. Kashi like rice, buckwheat, it is possible to add to meat broths.

From meat beef, from birds — chicken meat and a hypoallergenic turkey is most preferable. Once a week sea fish is admissible. Vegetables and fruit have to be seasonal, and dried fruits can be alternative. However, they should be dosed and given as a special delicacy.

For dogs potatoes, chocolate, spices, products reckon with amplifiers of taste like sausages as poison. It isn’t allowed to feed up the pet food from a master’s table. It is necessary to add vitamin supplements to natural food. These simple rules will prolong the pet’s life, having made it saturated and happy. 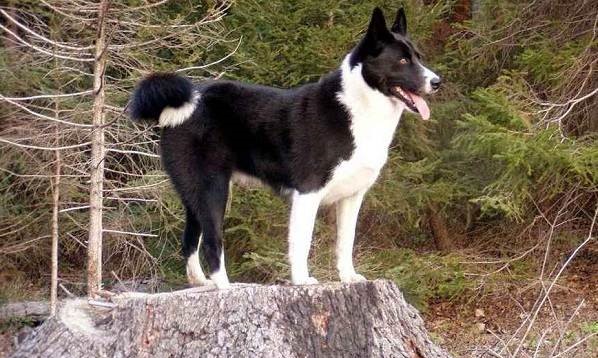 Responses of owners of breed the Karelian bear dog testify: the four-footed pet is incredibly strong health. Experts claim that for all the time of existence of these dogs wasn’t recorded any case of diseases by inheritance.

And if for a dog due leaving is carried out, she is capable to live 14-15 years. High-quality long walks with hyperactivity, the full-fledged and balanced diet, timely vaccination, preventive visit of the veterinarian approximately time in half a year belong to leaving.

However, there is the spoon of tar concerning health — these are parasites, in particular, fleas. The dense fur coat of dogs serves for them as a fertile field. In the preventive purposes it is worth examining and processing wool regularly. Special attention should be paid in the spring and in general in a warm season, when activity of parasites — at peak. 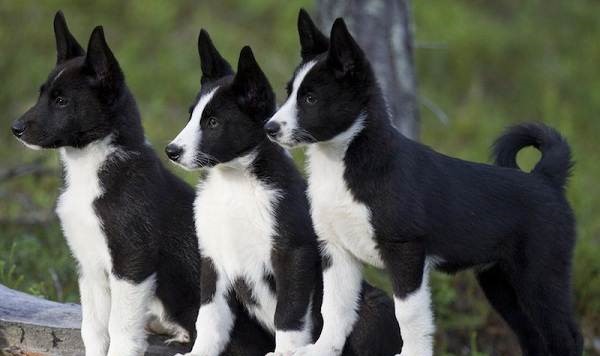 Puppies of the Karelian bear dog

Besides, it isn’t recommended to overfeed the four-footed pet. Otherwise it will gain the excess body weight from what will become passive and painful.

Before buying the Karelian bear dog, it is worth getting acquainted with her parents, to estimate their working qualities, external data, character. It is good if mother and the father of a puppy have diplomas, and also a long and qualitative family tree. It is good if the dog is already vaccinated. Usually it practices in nurseries.

In Russia there are enough nurseries of this breed, however the most known as it isn’t difficult to guess, are located near Karelia — in the Leningrad region. The price of the Karelian bear dog in similar institutions makes about 80-100 thousand rubles.

From hands of the pet it is possible to get twice cheaper. However it doesn’t mean that the dog will be healthy. Besides, the probability that a dog — not thoroughbred, but the metis is great. However, it makes no difference for those who brings to himself the pet partner.