The history and origin of kelpies

Today there are some hundreds of breeds of dog. A set remain unnoticed because of such variety. Further the Australian Kelpie will be a question of one of such breeds, namely. 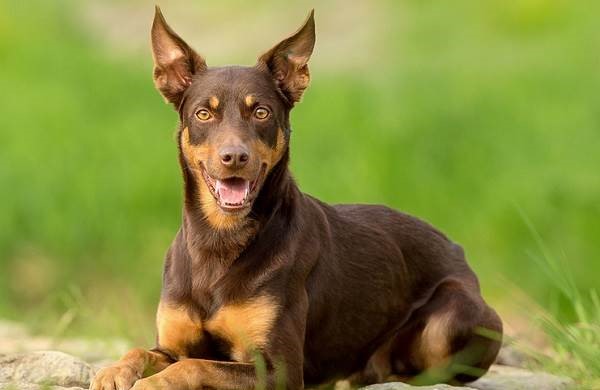 There was it in the XIX century as a result of crossing of wild dogs of a dingo and the cultivated shepherd’s breeds. It was initially used as a shepherd’s dog and I differed in the excellent working qualities.

On other continents this breed became known in the second half of the XIX century, and in 1908 for the first time participated in an exhibition of dogs. Now kelp didn’t gain due distribution in Europe, but all is also popular in Australia where about 100 thousand individuals live. In Russia the first dog of a Kelpie appeared in 1987.

Features of breed and character of a Kelpie

Rather powerful frame has Kelp, but thus is a medium-sized dog. This feature is caused by that this breed was used for a pasture of cattle. 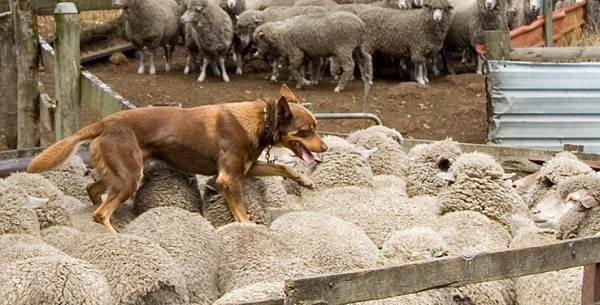 Kelpy keeps his balance perfectly, allowing him to walk on the backs of sheep

Having the big sizes, the dog won’t be able to maneuver to secure herself against hoofed animals. And breed of a Kelpie copes with it perfectly well, after all not for nothing they won popularity in dog agility.

The Australian kelpie will be remembered by the appearance to any − highly put standing ears similar to fox, bright, expressive eyes and a sharp muzzle.

Sharma to this breed adds a little extended body which looks a little inconsistently, but has excellent practical application on a cattle pasture. The Kelpie photo where it is possible to see their general view is given below.

The standard of a kelpa is in detail stated in the document FCI. Before acquisition of a puppy of a Kelpie for exhibitions it is necessary to verify puppy parents that is written in this document. But if the dog is got as the partner or a shepherd’s dog, there can be some divergences. 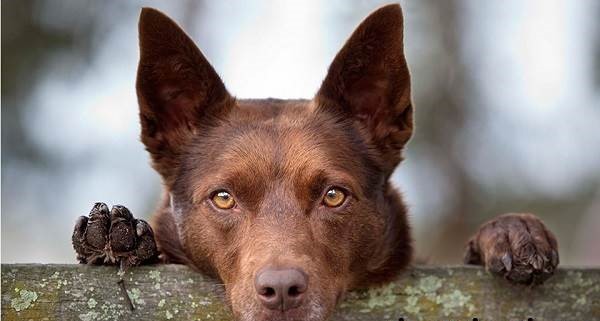 For example, if the kelpa at a color has a big white spot on breasts or white «socks», it doesn’t suit for an exhibition, but it reduces the price of a puppy. The lower bound of growth in withers at a bough − 43 cm, at dogs − 46 cm. The upper bound shouldn’t exceed 48-51 cm. The weight of an adult dog varies from 11 to 20 kg.

But despite such sizes which it would seem well are suitable for the contents in the apartment, this dog needs spacious monastery.

Echoes of ancestors shepherds in their blood don’t allow them to lie quietly for days on end on a sofa therefore without due physical activities of a kelpa will start destroying the apartment.

This dog has to be always busy and then she will be really happy and betrayed to the owner. If there is no opportunity to provide kelp its habitual work on a pasture, active walks by bicycle, a campaign in the wood, dog agility, freestyle or a mastiff frisbee will be excellent replacement to it. 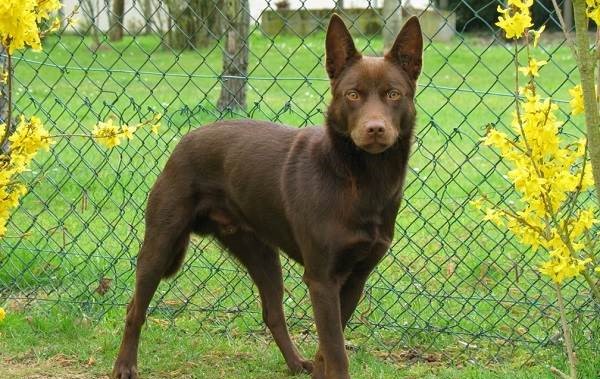 Also to you it isn’t necessary to forget about one strange habit of an Australian kelpie − to bite for feet! Initial mission of this skill — to return the beaten-off or lagged behind cattle, but in usual life it can be manifestation of destructive behavior due to the lack of due loadings.

But despite this strange feature, kelp − the breed suitable for families with children. Games with it will become one of the main entertainments for such families. Thanks to the ingenuity, these dogs are very quickly trained and have no problems with storing of new teams.

And here to achieve full obedience from a dog, it is necessary to try. Unfortunately, this breed is rather stubborn but if the owner is able to master temper and will achieve trust, it will be the best friend and the satellite! 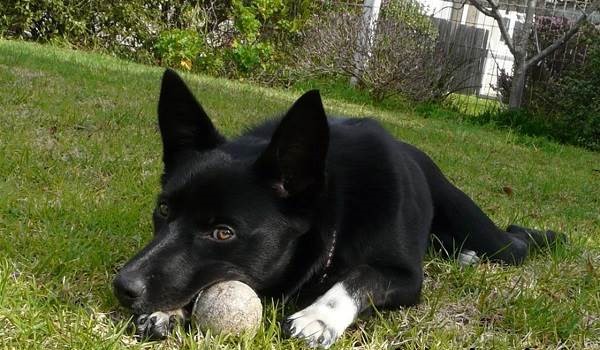 Kelpi is a very energetic dog, she needs space

Care and maintenance of kelpie

Short wool — one of advantages of this breed. In the summer they don’t suffer from a heat, and in the winter they are rescued by a dense underfur. That wool grew strong and healthy, it is necessary to comb out sometimes an underfur, giving the chance to grow new wool.

In food they are also unpretentious, but it is necessary to watch surely that it was balanced. Food can consist both of natural food, and of a dry feed. It isn’t recommended to mix this two look not to break balance of the useful substances arriving with food.

When walking a kelpa you shouldn’t lower it from a lead if contact is badly come with a dog or she doesn’t obey. It concerns foreign dogs watchfully therefore at their communication, it is necessary to watch language of a body of a dog. If she strained and sat down, it is better to take away the dog. 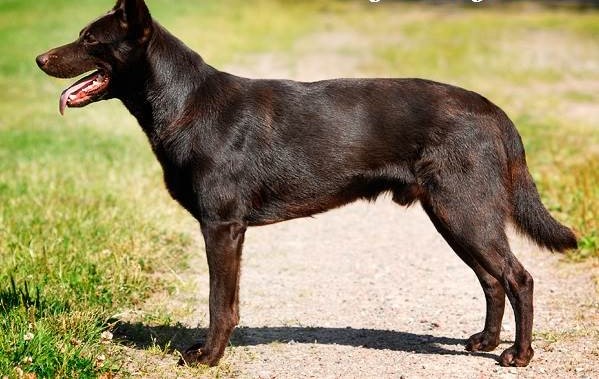 Also during walks you shouldn’t forget about their origin and it is worth understanding that having seen in the distance herd of sheep, the possession can lose kelpie and run on call of the nature.

By the way, to understand that the dog begins someone it is possible «to graze» on interesting feature of this breed − kelp bends down to the earth as if hunting, and moves small dashes.

The dog is considered quite healthy and has no problems with health, but it is necessary to check documents of parents before acquisition since this breed is inclined to problems with eyes.

Price of a kelpie and responses of owners

In Russia there is the only nursery of a kelpie and there is it in Stavropol. It is possible to get a puppy from 15 to 30 thousand rubles here, the truth in line for a dog persons interested borrow for some months ahead. It is possible to buy and from private hands, but at such way it is necessary to check all documents. 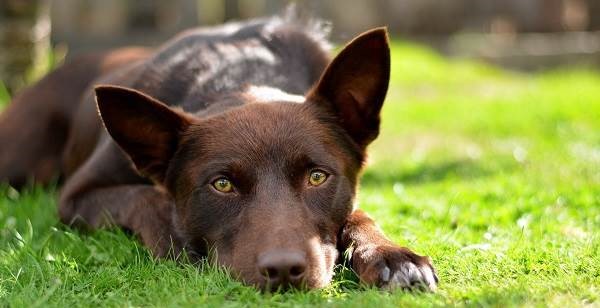 In Europe of nurseries it is much more, but acquisition of a dog by the abroad has some difficulties. For export of a puppy the factory owner will have to prepare a package of documents, to implant the chip and to do all vaccination.

Therefore it should be added expenses on all above-mentioned procedures to the cost of a puppy. And the price in Europe begins with 200 euros for a working dog to 700 euros for good exhibition kelp.

It will be necessary to buy kelpie on its homeland from 150 to 800 Australian dollars. But a dog it will be possible to receive not earlier than 6 months, according to laws of the country. To this term a dog «on quarantine». 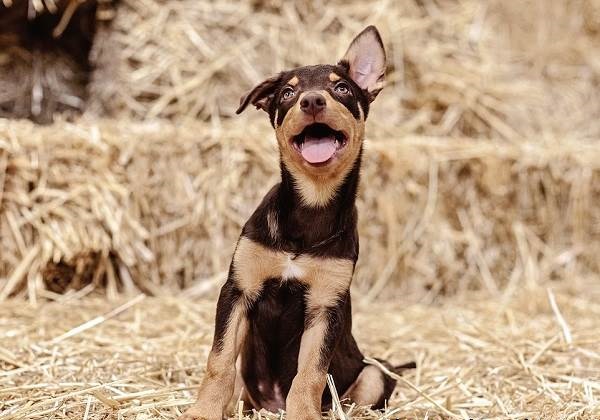 In addition to the preparation of documents and other procedures, it is worth thinking about the delivery. Given the cost of tickets to Australia, the purchase in this country — the most losing option, if a person just wants to buy a companion. But for the sake of new blood in breeding and victories at exhibitions, the choice of the motherland of Kelpie is the best choice.

If the price of a kelpie and complexity of its acquisition didn’t frighten you and you are ready to spend time for acquisition, don’t reflect and begin searches. From a kelpa you are waited by very saturated everyday life and full change of a way of life!