Kinkajou is an animal. Habitat and lifestyle kinkajou

He is still called a honey bear. In fact, the kinkajou refers to the raccoon. Honey animals have been nicknamed because of a predilection for nectar. Another animal is called a tench tail. On some paws kinkazh it is difficult to stay on the trees. 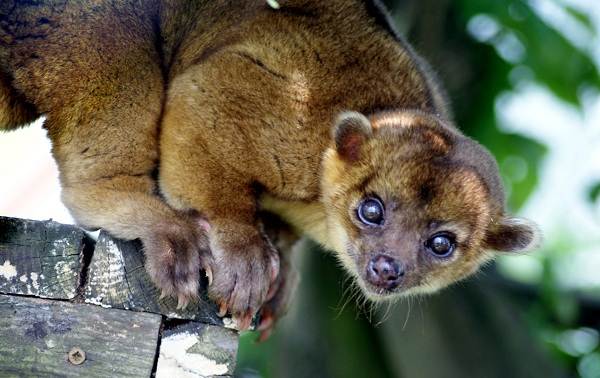 The animal moves along the trunks, clinging to them and branches with its tail. However, at times the kinkazh also moves through the private possessions of people. The exotic animal was started as a pet.

Kinkajou in the photo is distinguished by a brown-red color, an elongated body with an even longer tail. The fur on the latter is longer than on the trunk, head, paws. The coat is like a plush, the hair is silky, but resilient, densely planted.

At the sight of an amateur kinkaju — something in between a lemur, a monkey, a bear. From the latter, for example, a «rounded head» with a short muzzle and rounded ears is «taken».

From the lemur — big eyes. The tail and body structure is more like a monkey. However, the trunk of the Kinkazh also indicates its true species belonging to raccoons. 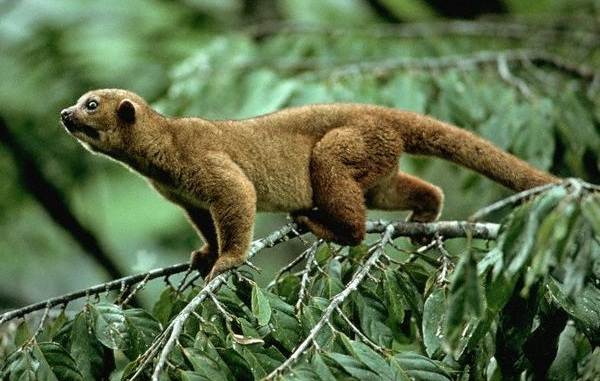 In dimensions kinkajou — animal with:

body length of 40-57 centimeters
half-meter tail
25-centimeter high at the withers
weighing from 1.5 to 4.5 kilograms, where the maximum is the indicator of large males
13-centimeter language, which kinkazhu penetrates into flower buds and hives of bees

The rear of the kinkajou is raised. Due to this, the animal seems to have fallen to the ground. It’s a matter of elongated hind legs. They have sharp claws. So kinkazhu easier to climb trees. Another device for this is the 180 degree turn of the foot. 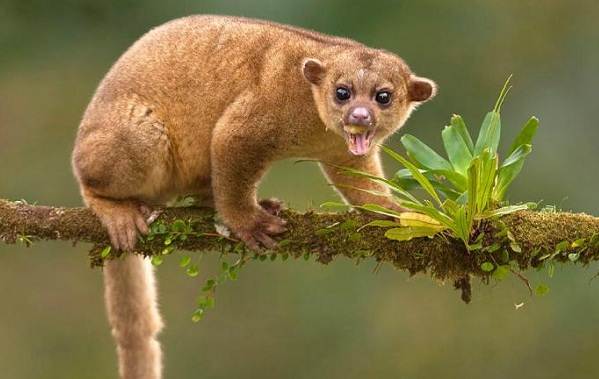 36 teeth are hidden in the mouth of the Kinkazh. They are sharp, they give out in a beast of a predator. Honey is not his only delicacy. Hunting possessions kinkazhu mark a fragrant secret. It is isolated glands on the abdomen and chest of a raccoon animal

If it’s a female, there are mammary glands. There are two. Both are located on the chest kinkajou.

Where the Kinkaj inhabits, the Americans know. They observe the animals in the tropical, moist forests of Brazil, Ecuador, Bolivia, Guyana, Costa Rica, Colombia, Venezuela and Peru. In the territories of Guatemala, Suriname, Nicaragua and Panama, the hero of the article also meets. In North America, the Kinkazh settled in South Mexico.

Woody way of life does not allow honey bears to settle in open spaces. The animals climb deep into the tropics. There Kinkajou:

1. They lead a nocturnal life. A hint on it is large, convex, round eyes. Due to them, the honey bear sees in the dark, can hunt after sunset. Before him kinkazhu rest, climbing into the hollow of trees. 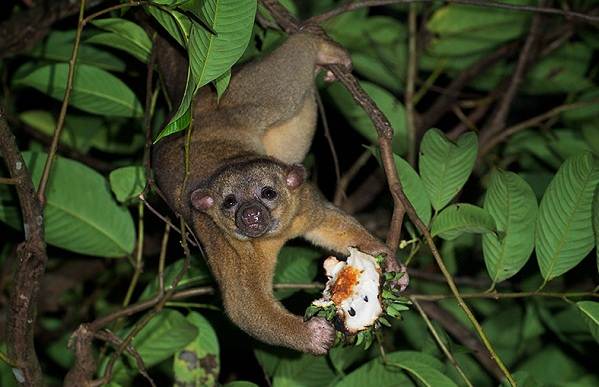 2. Live alone, or in pairs. The gregarious way of life is an exception to the rules. Occasionally there are groups of 2 males, females, their newborns and one young teenager.

3. Show care for each other. Although in fact the animals are solitary, they can weave together and do not mind combing the fur to their relatives.

4. They shout, like desperate women. In the night forest such sounds scare, hence the legends of lost souls in the forests of America.

5. Climb into the tree crowns. To their bottom the animals descend rarely. 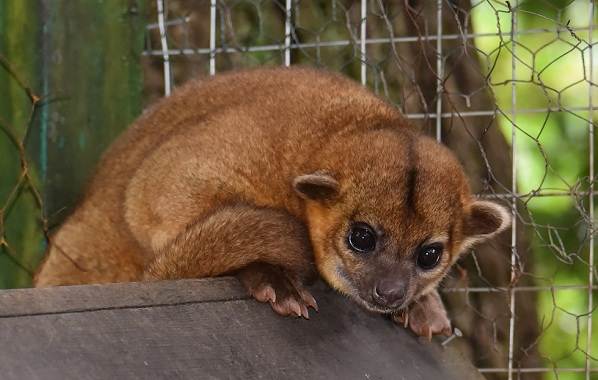 They move the kinkazh cautiously, until the last holding their tail for one branch, moving to another. At the same time honey bears are graceful and flexible.

Basically, the honey bear kinkajou eats nectar and fruit. Of the latter, avocados, bananas and mangoes are loved. Also listed are nuts. Kinkajou is chosen with a soft skin.

Sharp teeth have got from ancestors. They were carnivorous at 100%. However, 5 million years ago, an isthmus appeared between South and North America. On it to the south rushed true bears.

They occupied the niche of the ancestors of the Kinkaj, almost destroying them. Surviving animals were forced to switch to vegetable food. 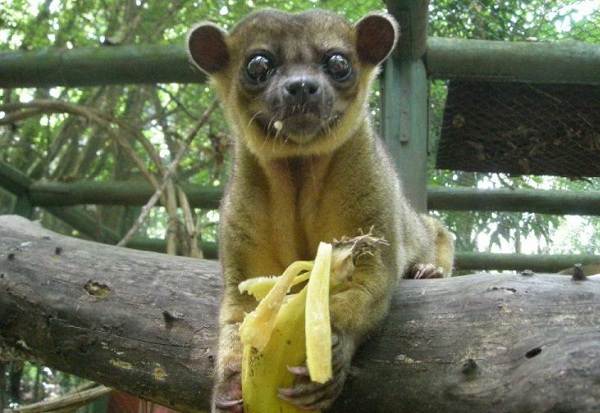 When there is a possibility, the Kinkajou Bear regrets:

Insects, for example, ants and termites, which are extracted from the nests by a long tongue
Where kinkajou dwells, they can regale themselves. That’s why the honey bear hides during the day, getting food only under the cover of night. It is necessary to be afraid of jaguars, South American cats, birds of prey.

Progeny kinkajou bring every 2 years. The females begin estrus. It is characterized by secretions from the genital organs. The secret is fragrant, it attracts males. Male:

Bites the lower jaw and neck of the chosen one.
Sniffs the female.
Masses the sides of the female. For this, the male uses the protruding bones of his wrists. 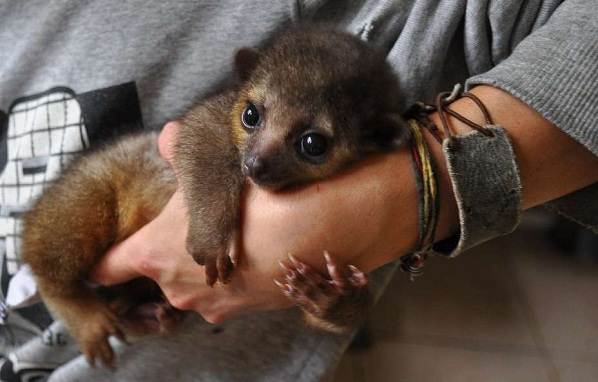 Since the nipple of the female Kinkajou 2, as many cubs are born. This is maximum. More often, 1 child appears on the light. It weighs about 200-grammes, and in length is equal to 5 centimeters.

Special attention should be paid to the question of how the Kinkaj looks after birth. Cubs are silvery-gray. The color remains for about a year. By this time, adolescents are gaining weight of an adult. Color remains the only signal of youth kinkajou.

The huge eyes of honey bears begin to see in the second week of life. The sense of smell and hearing are from birth. Motor skills are improved by the 3rd month of life. This is the boundary, when the kinkazh begin to move along the branches, clinging to the tail. 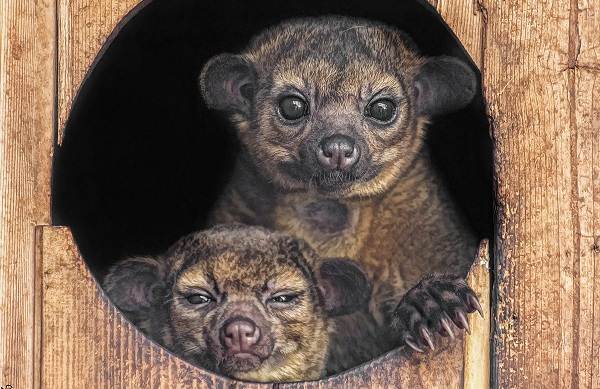 If kinkajou is a domestic pet, he lives 25-30 years. In the wild, honey bears rarely overcome the 20-year mark.

In order to easily tame the kinkazh, it is customary to take home 1,5-3-month-old cubs. Their cost starts from 35 thousand rubles. The maximum price of kinkajou is 100 thousand.