Resident of eucalyptus trees. Yes, yes, this is how you can briefly talk about koalas. These medium sized marsupial cubs live in Australia, and after artificial colonization of humans their populations appeared on the island of kangaroos. 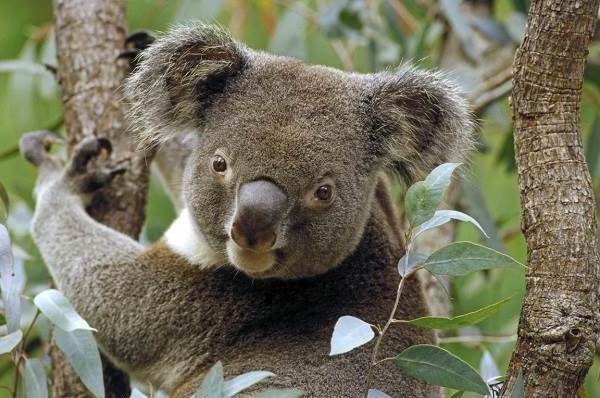 Koala is a herbivore, belonging to the marsupial class. There is an opinion that the name of the koala, in translation from the aboriginal language, means that they do not drink water. Koala, the photo of which is presented below, still uses water, especially she likes to collect dew from the leaves of eucalyptus.

This name for the animal was offered by the Frenchman Henri Blenville, who is an expert in zoology and anatomy of animals. The first inhabitants of the mainland called the koala a teddy bear. 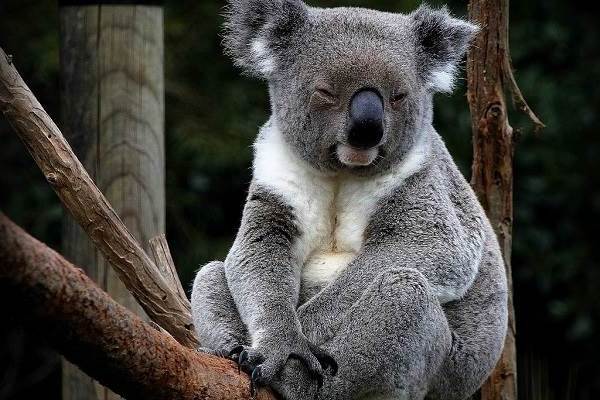 Koala is often called a tree-bear

Koalas belong to the family of koalas, which are absolutely identical to the family of wombats. Modern paleontologists number about 19 different species of koalas and the most common, at the moment the species is called Phascolarctos cinereus, which in Latin means moving around in the trees.

The geography of the bear is not great. The Koala lives and actively breeds in New South Wales. Some species of koalas are found in Queensland and Victoria. At the very beginning of the anthropogenic period, under an entirely different climate, the koala bear also lived in the west of Australia.

Appearance and character of koalas

Appearance of koalas is similar to very large wombats or small bears. However, their fur is much longer, thicker and softer to the touch. Koalas have elongated limbs, which helps them to move easily through the trees. 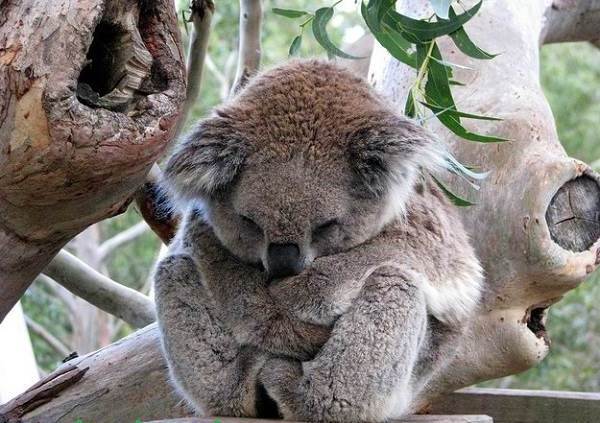 They have large round ears and long arched claws that can hold individuals weighing 5 to 15 kilograms. Brushes of upper paws koalas are divided into two parts and perfectly adapted for life on trees. The lower paws are much shorter and weaker, but this is not an inconvenience.

One of the interesting features is the fingerprint of the koala paw, because it is absolutely identical to the fingerprint of a person. Teeth koalas, the same format as kangaroos or vobmats. Sharp and sturdy incisors, easily cutting leaves, are typical of a group of dwarf marsupials. 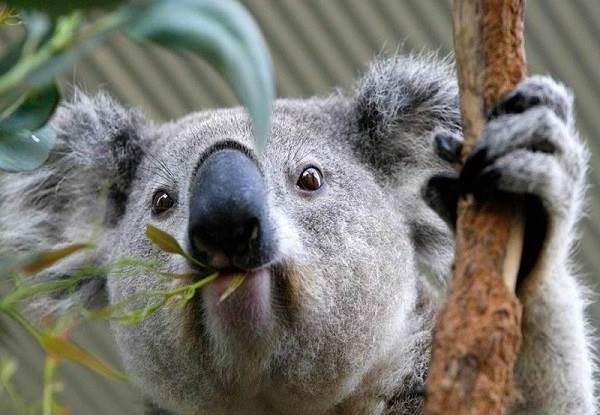 Fingerprints of koalas are identical to human prints

Another unique feature is the koala. It’s about the binary nature of their genitals. In koalas, it is very pronounced. Female have two vaginas, which lead to two separate uterus. Males in turn have a bifurcated penis and these unusual features cause delight in inexperienced lovers of wildlife and zoology.

Also you can not fail to note the record small brain of this animal. It is only two tenths of a percent of the total weight of the koala. Experts believe that at the beginning of evolution it was much larger, but due to the small activity in choosing food, the brain skukozhilsya and made koala one of the negative record holders in the competition of brain size among representatives of marsupial animals.

Life expectancy of a bear cub reaches 18 years. Koalas very rarely make sounds, exceptions are situations where the animal is frightened or injured. Males cry during periods of mating games, as the female chooses for himself the sonorous and powerful male. 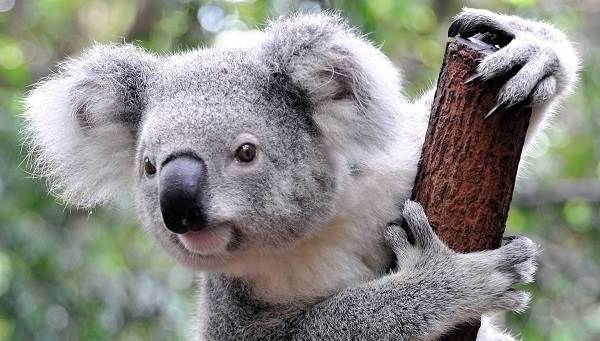 Koalas spend most of their life in the crown of trees, mostly eucalyptus. During the day these animals are passive, they can sit or sleep up to 15 hours on a tree, practically not moving. In cases where it is not possible to reach the neighboring tree to move to another branch, the koala slowly and reluctantly descends to the ground, as if struggling with laziness.

However, in case of danger, the animal can quickly climb onto a tree and jump over to another. Also koalas are able to overcome water areas, but they can force them to swim a force majeure, for the sake of pleasure they will not do it. 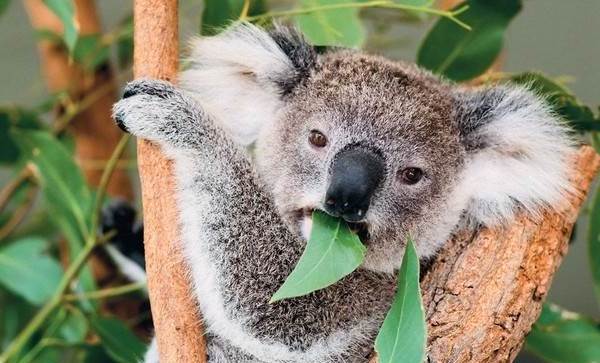 Koala is one of the most lazy animals

According to scientists, such an active passivity of this animal is due to the abundance of food, which does not require unnecessary movements for its production. Eating leaves and young shoots of eucalyptus, all processes in the body of the koala are inhibited. This is due to the fact that all the forces and energy are spent on the processing of poisonous eucalyptus leaves, which contain phenolic and terpenic compounds.

A shoots of eucalyptus contain a large concentration of hydrocyanic acid. Such poisonous food, except koalas eat opossums and flying squirrels, so the competition is not great, and therefore why strain. Here are koalas and rest on their twigs to themselves calmly.

Social structure and reproduction of koalas

Koalas by nature and nature are single. They do not create families, everyone lives by themselves. This applies to both females and males. Clear, protected territory they do not exist and only during the mating games and for reproduction koalas gather in separate groups, such peculiar harems. 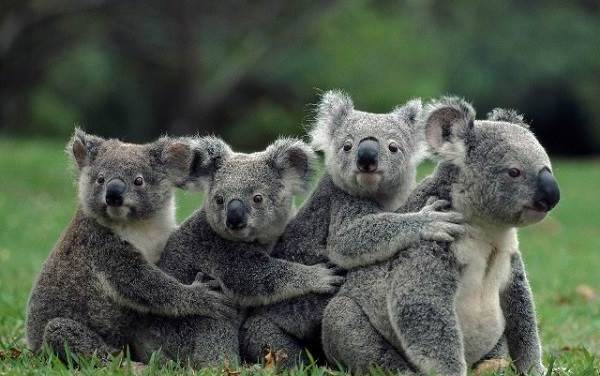 They consist of 3-5 individuals, one male, and the remaining females. The females were attracted by the smell of a male, which remains on the branches. On the branches, the male rubs chest, highlighting the breathtaking odors for the opposite sex.

Also no less important is the cry of the males. Female choose for themselves the appropriate smell and cry of the male and agree to mating. The entire process also occurs on the tree. A month after conception, the female has one cub, twins happen very rarely and more often females appear than males. 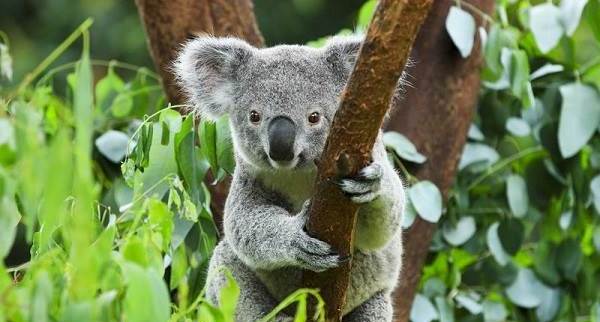 Weigh newborn koalyats about 6 grams, and body length is about 2 centimeters. The next six months, the kids are in a mother’s bag, feeding on milk. Then they are located on the back or belly of their parent and ride there for some time. For 30-31 weeks, the children feed on the mother’s calving masses, which starts producing unusually liquid and soft feces.

Why are they doing this, you ask? It turns out that this process is necessary for the subsequent digestion process of an adult koala. So in the digestive system, namely the intestines get the necessary for the processing of poisonous eucalyptus microorganisms. 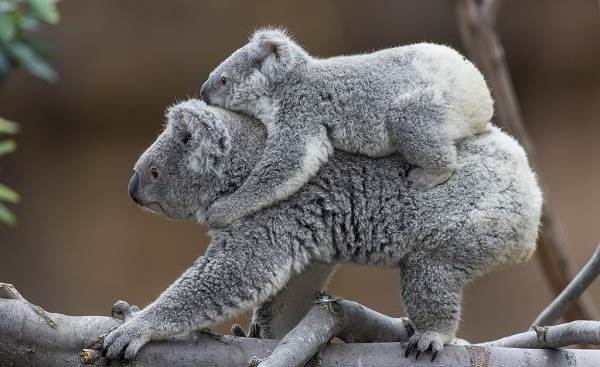 On the photo of a koala with a cub

A year later, young females go to develop their own site with eucalypts for independent life, and males spend next year with their mother until full puberty and only after that they part.

On average, Koala live about 14 years. Bears multiply once in 1-2 years. There were recorded cases when the koala lived to 21 years. In Russia koala can be found only in the zoo. Also, in the Internet, you can find and see the Koala on request koala video.