Features and habitat of the Langur

Langur monkeys have another name — thin-brow. This family belongs to the genus of monkeys and includes more than 10 different species. The main name of the animals “langur” comes from the word which in Hindi means “long tail” or “long tail”, however, this definition should be used only for the variety Langur Hanuman. 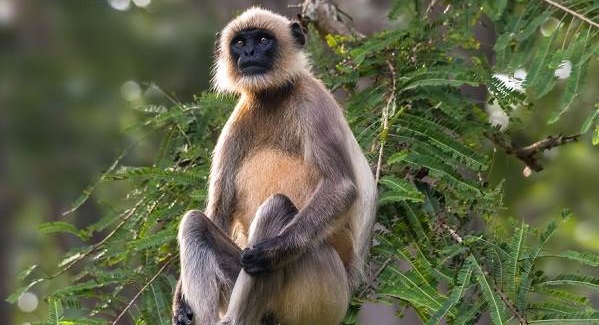 A remarkable feature of these monkeys is the three-chamber stomach. In general, langurs can be divided into small and medium depending on size.

Thus, the length of the body of an adult individual can vary from 40 to 80 centimeters, depending on the belonging to a particular species, while the long tail can reach 1 meter.

Langurs have a round face, shortened in front, the nose does not protrude. Their long paws and tail are predominantly thin, but strong and agile. In addition to the overall disproportionate length of the limbs, they secrete long hands and fingers. As for the latter, the only exception is the first finger, which is much shorter than the rest. 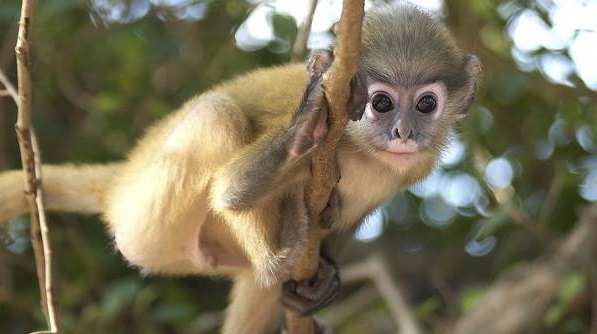 Coloring also depends on belonging to a particular subspecies. That is why the description of the monkey Langur is considered to be collective, you can learn more about only a specific subspecies by making a request by name.

Usually these animals flaunt fluffy fur of the same color and small variations of shades. So, the back and extremities are a little darker, respectively, the abdomen area is lighter.

Some species are marked with bright, prominent spots on the head. There are species with contrasting colors, such as the Nemean Langur.

On his head you can see a clearly distinguishable band of brown, with the monkey’s face yellow and its tail white. Java Langur may be gray or bright reddish brown.

Also to the distinctive features of certain species include elongated hair on the head. From afar and in the photo Langur with such a hairstyle as if wears a crown, or his hair converges into a thick comb. 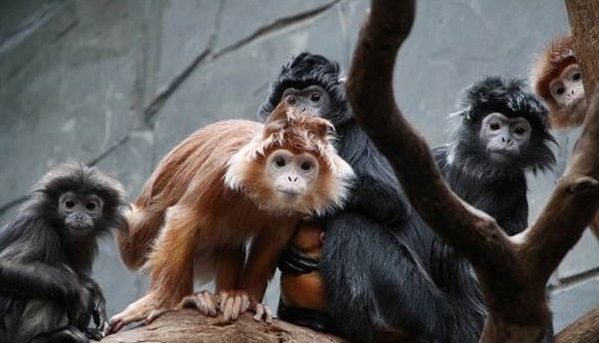 On the photo is the Javan Langur

The nature and lifestyle of the langur

Like many other species of monkeys , Langur lives mostly in dense forests. The maximum height at which these animals were recorded is 4000 meters above sea level. Therefore, it is considered that the langurs do not rise above.

How about many other primates ? Langurs can cover great distances without falling to the ground. Such a movement is carried out with the help of powerful jumps from branch to branch.

If the tree, on which the monkey needs to get, is at a considerable distance from the starting point, the langur is swinging on the branch with long, strong arms, thereby increasing the length of the jump. If Langur is forced to walk on the ground, it relies on four limbs. 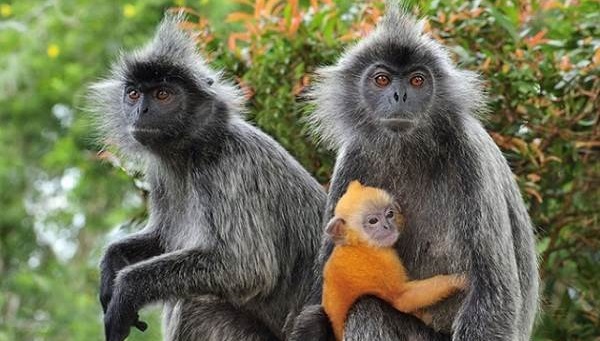 You can meet langurs in wildlife in large packs — from 30 to 60 primates. In each such company there is always the main male — the dominant and several ordinary males.

The rest of the participants are left to the flock kids, teenagers and females. Grown up langurs remain with the pack in which they were born, only until puberty is reached. Monkeys usually have their own territory, which they jointly guard.

It is noteworthy that the Langurs extremely rarely are sharpened in the cells and enclosures of zoos. This is due to the fastidious choice of food, that is, to feed the animal Langur is quite difficult. Living in the forest, the primate easily finds its own food. 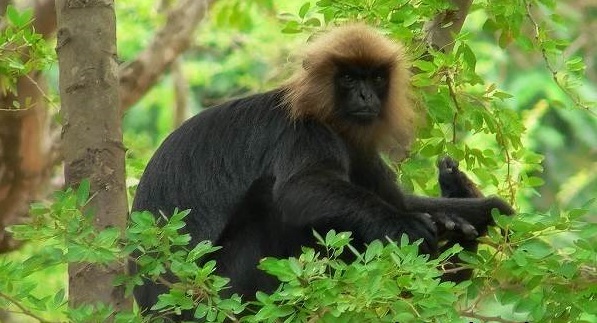 Thanks to the three-chamber stomach, the primate can be in search of the next source of food for a long time, if it has eaten well before. Thus, traveling through the forest, the monkey is almost in constant search of food, regularly resting.

It is worth noting that Langurs can periodically visit human settlements if they are located near the forest. There they are looking for food, if for some reason they were not found in their natural environment.

Often, people do not resist the raids of langurs on villages and gardens, as this monkey is considered sacred. Many villagers even deliberately leave them food near their homes. 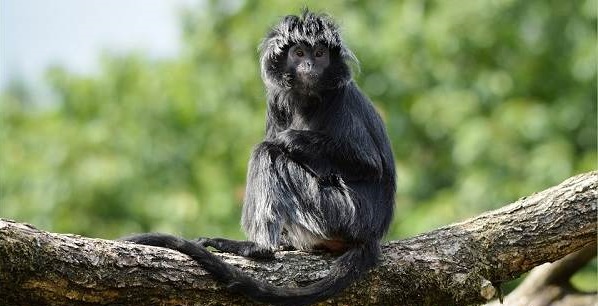 The main food products of langurs include leaves, bark, fruits and other edible parts of forest vegetation. In addition, the monkeys do not disdain large insects, eggs of birds. Of course, the most favorite delicacy is the juicy fruits of trees located on the territory of the flock.

Reproduction and life expectancy of the langur

Like other schooling monkeys, langurs are extremely attached to their offspring. Children live with their parents in the same flock until puberty.

The birth of cubs is not related to the time frame. That is, the female can give birth at any time, not more often than once in 1.5 — 2 years. The mating ritual begins with the fact that the female (in which the period of estrus begins), excited by hormones, begins to reflexively lure the male from her flock. 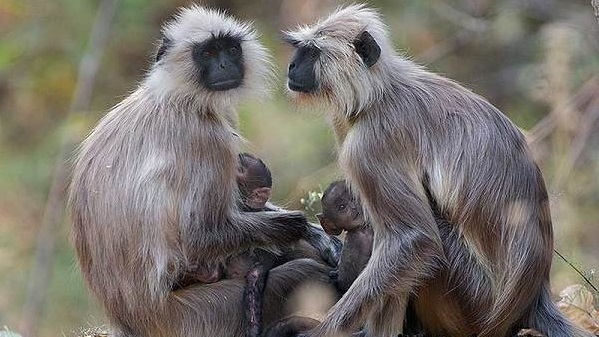 She does this by shaking her head from side to side. When the male responds to the flirting, mating occurs. Sexual intercourse itself may involve several approaches.

Pregnancy lasts about 6 months, then the baby is born. In most cases, female monkeys give birth to one cub. Immediately, the little monkey clings to her mother’s waist and thus travels with her throughout the entire territory of the pack.

Initially, the young lagnur is dressed in light wool, which darkens with age. The proportions of his body are amazing — the length is about 20 centimeters with a weight of only 400-500 grams. 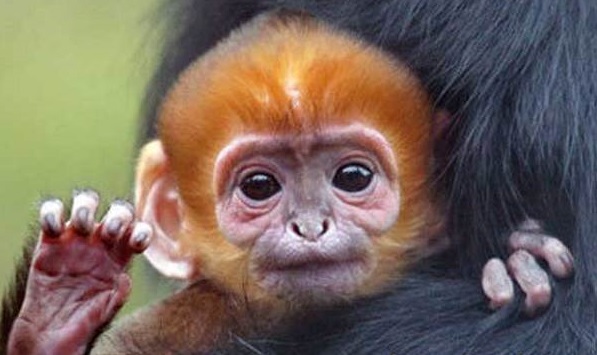 In the photo baby Langur

The rest of the female flocks and teens help to look after the cubs and take care of them. The first one and a half years, the baby eats mother’s milk, gradually switching to adult food.

By the age of two years, puberty usually begins, and an almost adult monkey leaves the flock. Under favorable conditions, Langur can live up to 25-30 years, but this rarely happens.