Peculiarity and habitat of lemming

Lemmings are rodents that belong to the hamster family. They also resemble a hamster outwardly — a dense structure, weighing up to 70 g, and up to 15 cm long, resembles a ball, because the tail, legs and ears are very small and are buried in wool. The coat is colored mottled or brown. 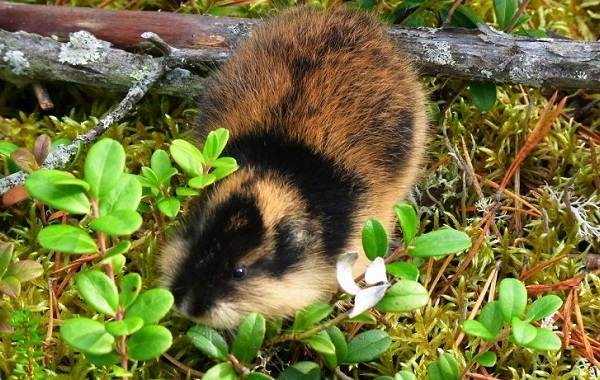 Lemmings live in the tundra and forest-tundra of North America, Eurasia, as well as on the islands of the Arctic Ocean. In Russia, lemming lives on the Kola Peninsula, in the Far East and Chukotka. The habitat of this representative of the fauna must be replete with moss (the main type of food of the lemming) and good visibility.

Listen to the voice of the lemming

This kind of hamster has an interesting feature. The claws of some lemmings by the winter period grow into an unusual shape that resembles either small flippers or hoof. Such a structure of claws allows the rodent to better stay on the surface of the snow without falling, and it is good to break the snow with such claws.

The coat of some lemmings in winter becomes much lighter, so as not to stand out too much on white snow. A lemming lives in a hole that it digs for itself. Nora represent a whole network of intricate, winding passages. Some species of this animal do without digging holes, they simply make a nest on the ground or find places suitable for their home. 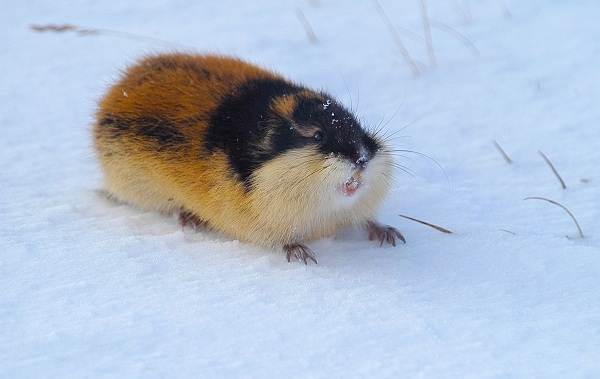 Tragic and inexplicable, so far, this little animal has a peculiarity. When the number of lemmings grows strongly, animals, first singly, and then, merging into a continuous stream of living bodies, move in one direction — to the south.

And nothing can stop them. Live avalanche crosses settlements, ravines, steep slopes, streams and rivers, animals are eaten by animals, they die from lack of food, but stubbornly move to the sea.

When they reach the seashore, they rush into the water and swim until they have enough strength until they die. What pushes small animals to suicide, scientists can not yet answer. Especially this phenomenon is observed in Norwegian lemming. 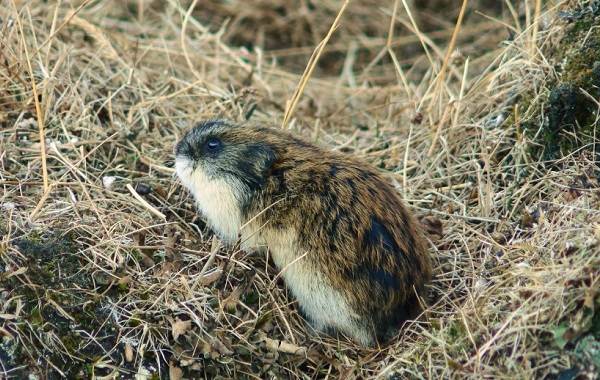 The nature and lifestyle of the lemming

The companion from this small animal is useless. The lemming from nature is given a rather ugly character. They are not too welcome beside themselves finding their own relatives, and even often arrange fights.

Lemming prefers to live alone. Not too developed in him and parental feelings. The males immediately after performing the sacred duty of procreation go in search of food, leaving the female with offspring.

They are too aggressively disposed towards the appearance of a person. When meeting, this beast leaps on a man, whistles menacingly, climbs onto its hind legs, firmly sits on a shaggy, lush ass and begins to frighten, waving its front paws.

The outstretched hand of the too annoying “guest” can be grabbed by the teeth, in other words, they show their antipathy in every possible way. And yet, it does not succeed in intimidating a serious beast, for which a lemming is a tidbit. Therefore, a more reliable protection for this crumb is, nevertheless, its own mink or dense layer of snow.

Some types of lemming (for example, forest) prefer not to be seen by anyone at all. Despite the fact that they go out of their moves several times a day, it is extremely difficult to see them, and even more so, to capture the lemming on the photo. This animal is very careful and goes only at dusk or at night.

Lemming has several species, and among themselves these species differ in their habitat and, as a result, different diet and lifestyle. In Russia, the forest, Norwegian, Amur, hoofed and Siberian lemming, as well as Vinogradov’s lemming live. Both in summer and in winter, the animals lead an active lifestyle, do not fall into hibernation in winter. 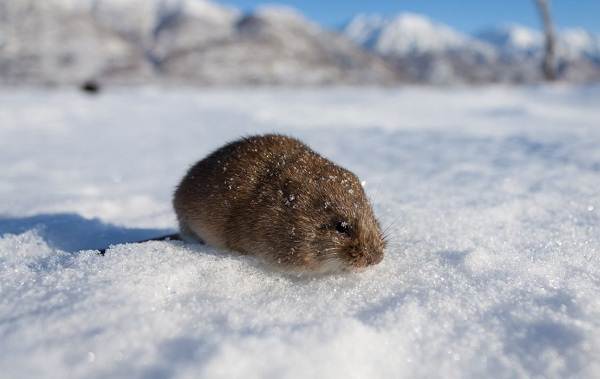 Lemming feeds on plant foods. Its food depends on where this animal lives. For example, the forest lemming prefers mostly moss, while the Norwegian rodent adds to its menu already cereals, lingonberries, and blueberries. The hoofed lemming loves birch shoots and willows more.

And yet, to the question “what lemming feeds on,” you can answer with one word: “moss”. It is very curious that the hoofed lemming and the lemming of Vinogradov stock up food for the future. Their less thrifty counterparts have to make many passages under the snow in order to get to the feed in the cold period.

And eating a lot of animals. With a weight of only 70 g, this hamster eats twice a day his food. If to count, then in a year it will be more than 50 kg. Lemming takes food not anyhow, but strictly according to the regime.

Sometimes there is not enough food, and then the animal eats even poisonous plants, and when it is impossible to get such plants, the lemming attacks small animals, and even animals that are larger than its size. However, more often, when there is a shortage of food, the animals are forced to migrate and explore new places.

Reproduction and lifespan of lemming

The natural lifespan of this rodent is small, the lemming lives only 1-2 years, so the animal must have time to leave offspring. For this reason, lemmings enter sexual maturity very early. 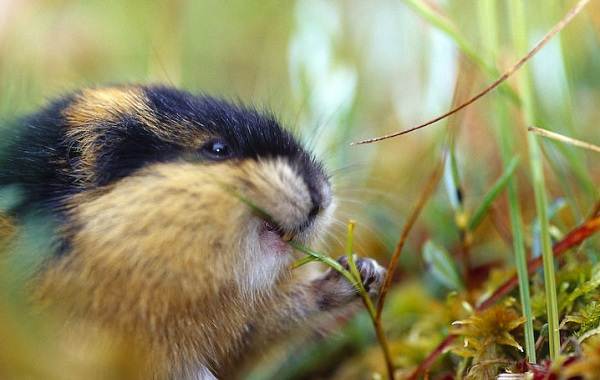 Lemming feeds on grass and insects

Two months after the birth, the female lemming itself is able to produce offspring. The male is able to continue the race since 6 weeks. Very often the number of their litters per year reaches 6 times. In one litter, as a rule, 6 cubs.

Pregnancy lasts 20-22 days. However, at this time the male is no longer in the nest, he goes in search of food, and the female is engaged in the birth and “rearing” of the offspring.

There is no single breeding time for an animal lemming. It is capable of breeding even in winter, in extreme cold. For this, a nest is made deep under the snow, lined with dry grass and leaves, and babies are already born there.

There are periods when these animals become very much, then there is a surge in the birth rate of both owls and foxes, because lemmings serve as food for a large number of animals. Foxes, wolves, Arctic foxes, ermines, weasels and even deer hunt for lemming. It is the great fecundity that maintains a certain number of lemming. 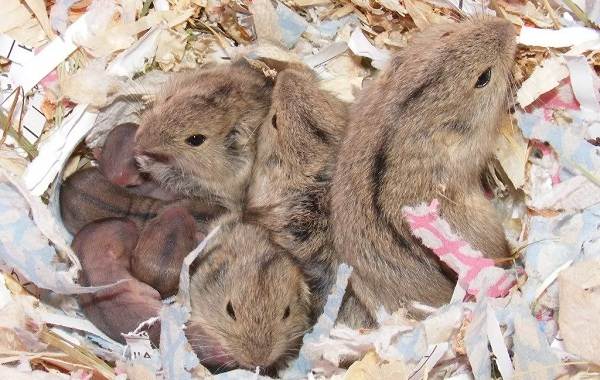 Lemming can breed, even in winter

It happens that some species of animals are able to multiply at all when the lemmings have a low birth rate and there is a shortage of food. For example, the snowy owl does not lay eggs, and arctic foxes are forced to migrate in search of food. However, you should know that lemmings not only play the noble role of food for other animals, they are also carriers of various diseases.