Sea depths are inhabited by a huge number of inhabitants. Some of them are quite cute and cute creatures, there are very strange, incomprehensible, there are quite imperceptible. But now we will talk about one of the most formidable and dangerous inhabitants of the sea — about the sea ​​leopard. 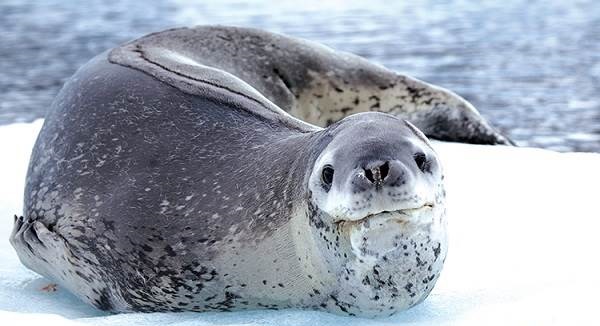 Appearance of a sea leopard

The sea leopard belongs to the family of seals , and is the largest representative of this species. The size of this predator is impressive — the body length of a male is 3 meters, females up to 4 meters.

The weight is almost half a ton in females and about 270-300 kg. in males. As you can see, females can not boast of grace, but rather quite weighty compared to males. But, despite such dimensions, there is very little subcutaneous fat on the body of the sea leopard.

The huge body has a streamlined shape, which allows it to develop a high speed in the water. For the same purpose are strong and powerful long limbs, as well as natural flexibility. 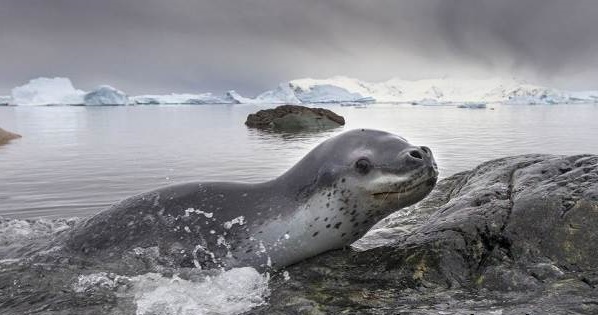 The shape of the skull is flattened, which makes it look like a reptile’s head. In the mouth of a leopard there are two rows of sharp teeth with canines up to 2.5 cm. Sight and smell are well developed, there are no auricles.

The leopard of this, in fact, a seal , was called partly for its color — randomly white spots are located on the dark gray skin of the back. The abdomen is light, and the pattern of spots on it is vice versa dark. The skin itself is very dense, the fur is short.

The sea leopard lives in the Antarctic, around the perimeter of the ice. Juveniles swim to small separate islands in sub-Antarctic waters and can stay there at any time of the year. Animals prefer to keep the coastline and not swim far into the ocean, excluding the time of migration. 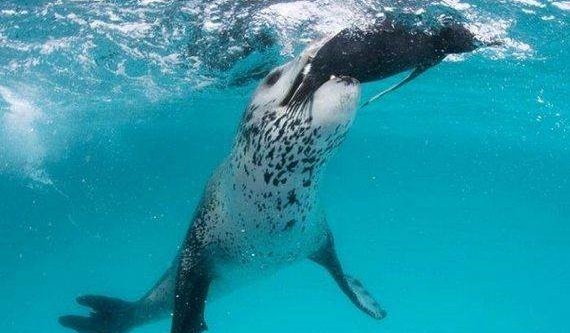 Penguins are the most important delicacy for sea leopards.

With the onset of winter cold, sea leopards swim away to the warmer waters of Tierra del Fuego, Patagonia, New Zealand, Australia. On the most remote of the inhabited islands — Easter Island, traces of the presence of this animal were also found. When it comes time, leopards move in the opposite direction to their Antarctic ice.

Unlike its seal congeners, the sea leopard prefers to live alone rather than gather in large groups on the shore. Only younger individuals can sometimes form small groups.

Males and females do not contact at all, except for those moments when mating time comes. During the day, the animals quietly lie on the ice, and with the arrival of night they descend into the water to feed. 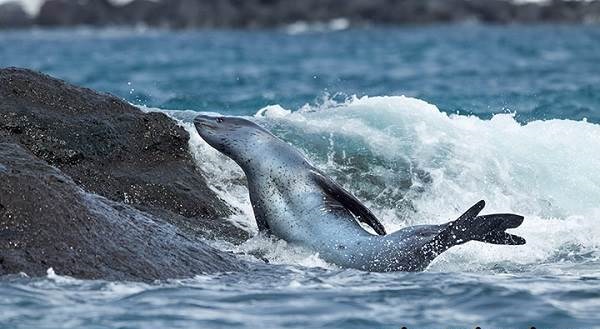 In the hunt for penguins, the sea leopard can jump onto land

The sea leopard, in its territorial waters, is considered one of the main and dominant predators. Thanks to the ability to develop a speed of 30-40 km / h in water, the ability to dive to a depth of 300 meters and the ability to jump high out of the water, this sea beast has created for itself the glory of a real leopard.

Despite its enormous size and the glory of the ferocious predatory beast, the basis of the marine leopard’s diet (45% of all its food) is krill. Its maw is designed in such a way that it can filter water through its teeth so that small crustaceans are inside.

Such a device is similar to the characteristics of the structure of the jaws of a crabeater eating, but less perfect. Another significant ingredient in the sea leopard menu is small mammals — crabeater seals, eared seals, Weddell seals and penguins . 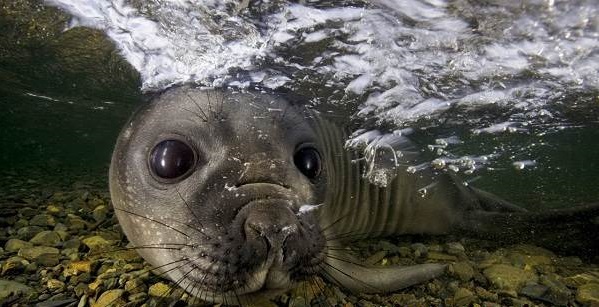 In the photo of a sea leopard cub

Moreover, individual predators can specialize in a certain species of animals. It is not clear what causes it — the characteristics of the hunt, habits or taste preferences. Catching an adult penguin who can swim as well as a predator is very difficult, so the chicks most often become victims. Penguins and seals are hunted mainly because of the fat that the leopard needs.

Leopards hunt for such prey both in the water and jumping on dry land. It often happens that a penguin with a gaping position stands at the edge of the ice, while a predator has spotted it from the depths. Able sea leopard who can deftly and quickly jump onto the ice easily grabs unwary little animals. Some have time to escape and flee, as evidenced by the numerous scars on their body. 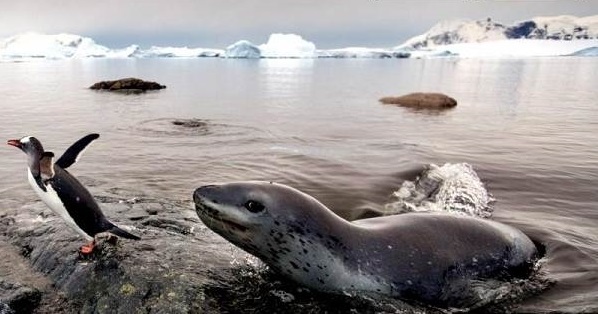 If, however, failed to escape, the animal is waiting for the massacre. Leopard has a habit of skinning its prey by jerking. Shaking his victim from side to side above the water, the sea leopard separates the meat it does not need from the greasy skin.

Such a hunt becomes more and more active in the autumn when the predator needs to “warm up” before the cold weather. The animal also eats fish, but in quite a small ratio. It is quite difficult for a sea leopard to distinguish from the water what kind of beast is the subject of its hunt, so sometimes they even attack people. But this is a great rarity — only one death was recorded with human participation. 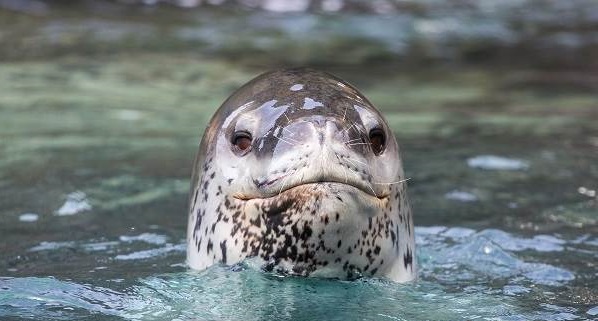 Then the sea leopard attacked a female scientist and dragged her under the water, holding her there until she suffocated. Despite the apparent danger of these big animals, professional photographers still find the courage to study them. And many speak of sea leopards as curious and harmless animals.

With the arrival of spring, the breeding season begins at the sea leopards. In order to attract a female, the gentlemen are ready for some sophisticated tricks — for example, to hit her with the power of their voice, they swim in the cavity of icebergs, which act as amplifiers of sound, and they sing mating songs there.

Mating in the water in spring or summer, females expect the appearance of offspring after 11 months, that is, with the arrival of the next warm season. Cubs are born on ice, immediately surprising in size — up to 30 kg. weight and about one and a half meters in length. 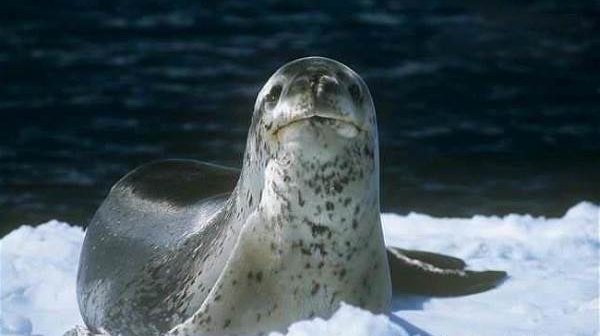 The first month the female feeds him with milk, then teaches him to dive and hunt. At sea of ​​puberty, sea leopards reach the age of four; their life expectancy is about 26 years.

Despite the fact that at the moment their population is about 400 thousand individuals, the life of these large seals directly depends on the amount of drifting Antarctic ice, because they live on them, their offspring are born on ice floes. Therefore, perhaps the main danger for these animals will be global warming. One can only hope that climate change will not entail a threat to their lives.