Recent years has become very fashionable as Pets, to include exotic animals. Iguanas and pythons inhabit our homes. Not to fear, even to buy poisonous spiders, frogs and snakes. As well as falcons, partridges and the turn to house owls. What they look like. It would seem, is a wild, night bird. Need to get to know her.

Brownies owls belong to the family of the owl. From their appearance, there are several subspecies, slightly different from each other. This is Tengmalm’s owls, Pygmy. Owls-Elf and Burrowing owls. 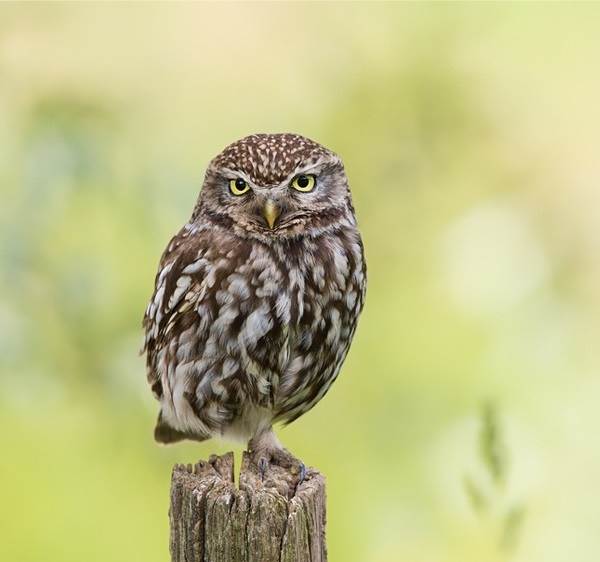 They are birds of prey. But different from their cousins in that their head is sticking out of the feathers, very similar to my ears. And the size they are, almost two times smaller owls.

The largest representatives of these birds weight, not more than three hundred grams. Its body length is twenty-five, thirty centimeters. Females and males are almost identical in size ladies a little more.

The color of its feathers, very beautiful. He is brown with a grayish tinge. On head and back covered with white spots. And the breast and body below, vertical gray and white stripes. 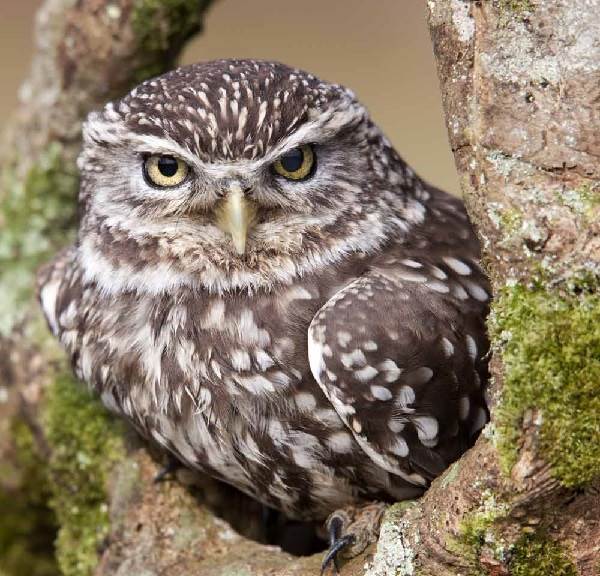 Pictures homemade owl show that the head is much smaller if you compare with others of his kind. Round in shape, flattened in front. Against this background, its yellow eyes with black pupils seem very large.

The beak is of medium size, or dirty yellow, or very light brown color. Head, quietly flowing into the body. Eyes home owl, not able to look around. He sees only what is in front of him.

Therefore, the wise nature has endowed the birds neck so that no problem spinning in different directions, a hundred and eighty degrees. And the vision of the owl, and the absolute hyperopia. He sees a small mouse in front of hundreds of meters. 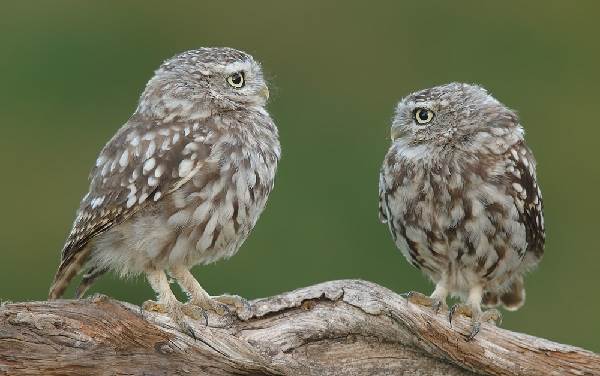 But what is happening under the nose, never notice. His body is beautiful, proportionate, wings 15 cm folded back to the tail. The tail of the small size.

And in the background, it seems that in owl wingspan is very large. Bird legs thin, not short and to the trimming of overgrown feathers. Claws long and strong, to be able to grab their prey.

There is this bird, perhaps around the globe except North and South pole. In all parts of Europe they have to meet. As Asian countries were his home, including. 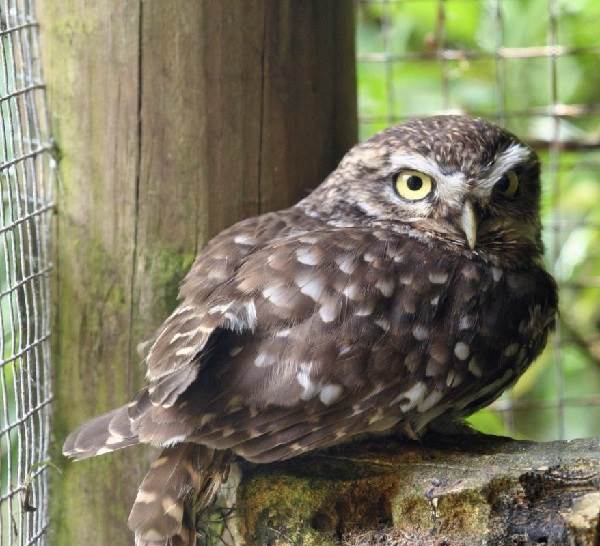 America and Africa, everywhere the owl had settled. He avoids groves and forests. And to settle in a place where the steppe zone, rooftops, attics, abandoned buildings and even the cemetery manages to find himself a house.

Since ancient times, why was considered, to see or hear home owl – trouble. A cry, more like a sudden squeak, kind of. Males, females and Chicks voice sounds different. Although, what can hurt this harmless bird.

The owl himself is not happy with the person. People who believe in all superstitions is scaring them off, driving away from his home. And having met, the bird begins to back away, swaying to the side of the head and tail. As if searching for escape routes. Then abruptly, the scene takes off and flies away. The conflict is not. 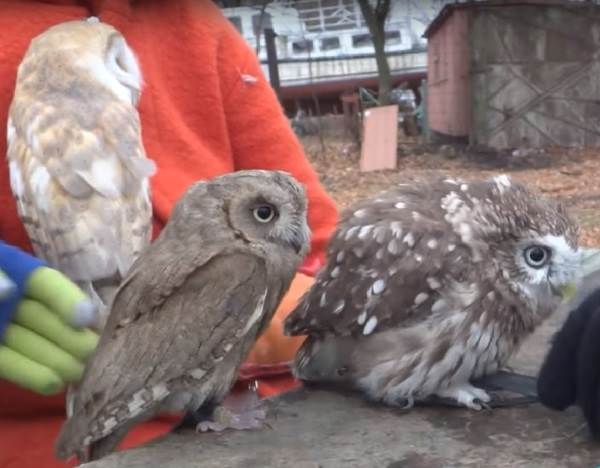 But home owl at home, who has tamed a bird. So they showed their anger, using claws and beak. To educate them to daily, but very gently, so as not to injure morally.

Home owl by nature a denizen of the night. He is active in the evening, all night and early morning. And the whole day resting, hiding somewhere in his nest. Nest, as a rule, do not pitch. Just find the right place, and the maximum is applied grass and twigs to make a rug.

Homemade owls, choose a place of residence, in General, a quiet rural area, suburban area. In a big city, you can see it, but very rarely. Ideal for home, are farming, cattle breeding pens. There are a lot of animals, consequently much grain for their food, and so full of rats and mice that owls eat. 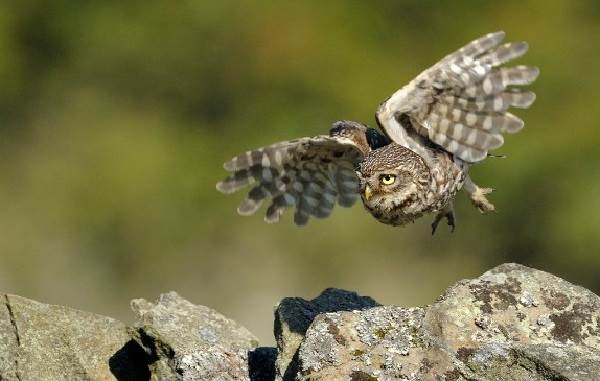 If this bird decided to build a nest in the house, preferably under the roof or in the attic. Suspecting a new roommate in your house you can check its presence in faeces and five-centimeter marks from his paws.

In a natural environment, birds nest in hollows of trees, a cleft in the rocks, some may even in the birdhouse to climb. Also, little owl lover warm climate. On areas covered with snow crust, it is difficult for them to hunt.

Food of the little owl

Hunts and eats homemade owl from evening to morning. Very rarely, it crashes in the afternoon. A bird can be a long time to sit somewhere on a tree branch on the roof of the house, to hunt down future meals. Then noticing the potential a mouse, a frog or a lizard, even some rats attack.

Long hovering over a victim, choosing the right moment to attack. In the case of another mouse, the bird will simply ignore it. She’s definitely focused on the first extraction. Young, grown Chicks with a fun lunch of various insects. 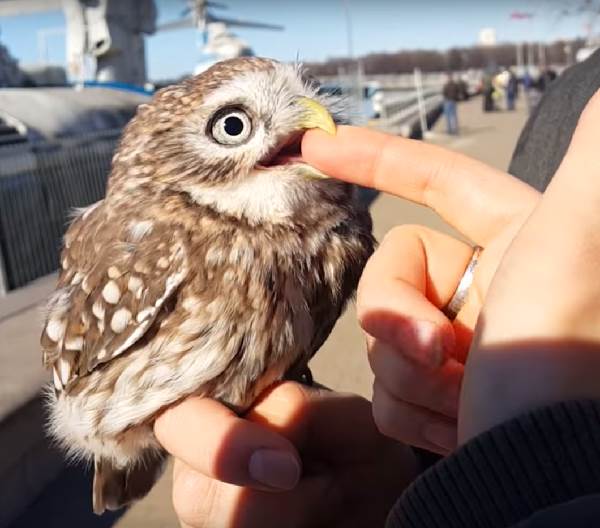 Small food, the owl swallows entirely. Well, if hunting is paired that often, and caught a rat or even a cat, in the air of this production is not raised. Birds will to drag it to their nest.

If the owls settled down in the open field, going out on a hunt, hunt down mice and gerbils. Not only that, eat the poor animal, and even settle in their den.

A farmer is not even against seeing such households. Because I know for sure, now rodents in their farm will not. Here’s a winged-feathered-cat. Also, these birds, the whole warm period, harvested their own food for the winter. Collect the supplies in the bins located in the hollows of trees.

With the onset of spring, the birds develop the instincts to reproduce. The male, finding his lady of the heart, and that they have once and for all life, starts flirting. He struts, dances.

If Madame is not criminal, then the gentleman goes on the hunt, then to lure the chosen female. When all the flirting ended well, and the pairing process has completed, the female lays eggs.

There may be three, and maybe six. Less than a month, the expectant mother incubates the eggs, creating them the right temperature for development. «Spouse» is not moving away from his «wife», and carefully feeds her. If home the owls are in captivity, under duress they will not breed. They need to create conditions so that birds chose their pair. 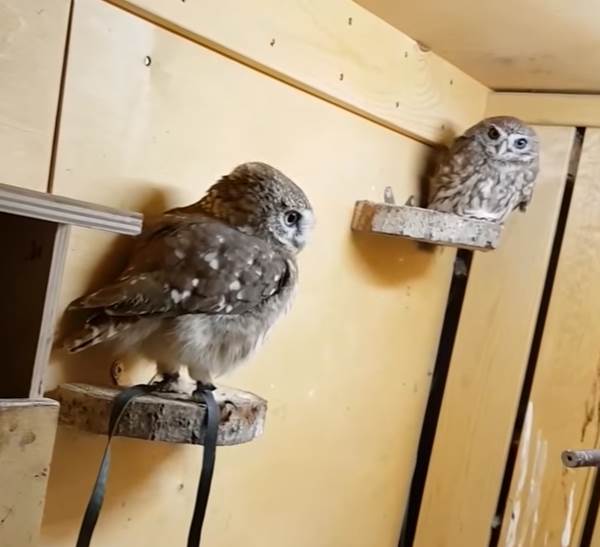 The Chicks are born very tiny. Their weight is not more than ten grams. Covered with light down and completely blind. The eyes of nestlings open by the second week of life. As they are at this time in absolute darkness.

A month, parents will, in the truest sense of the word to overfeed their children. And those, in forty days reach adult size. By this time they will be able to fly, hunt, and be ready for independent living.

Because of the speed, their parents will leave forever. The Chicks will live together as long as yourself will find a few and smashed into adulthood. Live owls up to ten years.

During this time, they can lead to light twenty or more Chicks. These birds are the most necessary, among predatory birds. Because, as fight small rodents, along with the man.

If someone decided to get a pet, remember that Pets owls, love affection. And if, in the educational process you prekretnica or how it would hurt the home of the Mouser, he might get sick, fly or even die. 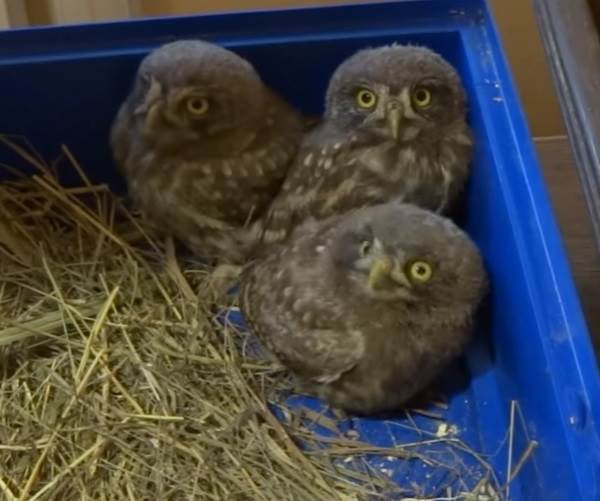 And despite the simplicity of the contents of the owl, they are not the big sizes, don’t bark, wool does not spread, does not smell. Still require the respective costs. Because they have to have proper nutrition and conditions maximally close to natural.

People have become more to buy these birds, and their prices have increased many times over. To purchase a pet owl, now is not the problem. The world wide web of the Internet a lot of ads. As well, the breeders home, they give advice on their content and care.

Prices for pet owls are different. There are ads where the bird offered to buy for 5 thousand, and 20 thousand rubles. But for some reason, for unknown reasons, the number of these birds is greatly reduced. In Belarus, home of the owls listed in the Red book.