Among inhabitants of sea depths lufar the lucheperykh of fishes from group the okuneobraznykh represents. It is known as an active predator, prompt in attacks behind production. In a pursuit jumps out behind production on a surface, low coasts.

But also itself becomes favourite object of sports fishing. To overcome a predator not easy – at fish desperate character, maybe, therefore ledopery lufar became object of a modern computer game.

It is possible to recognize the representative of family the lufarevykh on the extended and flattened body covered with roundish scales of the small size. On a back two fins with prickly beams are located. 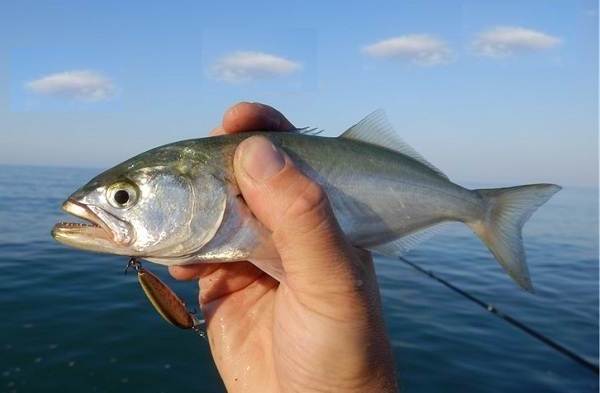 In the first they can be counted 7-8, and to find in the second only one, the others – hryashcheobrazny, soft. Couples of chest and belly finlets short, tail forked.

Back color dark, blue-green shade, side light-silvery, and paunch whitish. At chest fins on a dark stain. The big head with a huge mouth. The jaw with sharp teeth is pushed forward. Lufar on a photo – by the form the real predator which it also is.

Large fish can grow in length up to 130 cm and gain weight to 15 kg, but in trade production individuals of 50-60 cm in size, weighing up to 5 kg come across more often.

Lufar carries out life in pack. The number of big fish family includes thousands of individuals. In continuous migration slip-ups of predators bear danger to other inhabitants of the sea, but also fall prey of fishery vessels.

Packs of fishes mainly keep in sea waters, at a depth up to 200 m. During hot seasons lufar moves to coastal zones, mouths of the rivers, but with a cold snap comes back to the high sea.

In hunting shows uncontrollability and passion. The slip-up lufar segments flocks of small fish prompt introduction, then plans the victims and overtakes in a throw. With an open mouth, exaggerated gills catches production and instantly eats. After completion of hunting the pack lufary quickly unites. 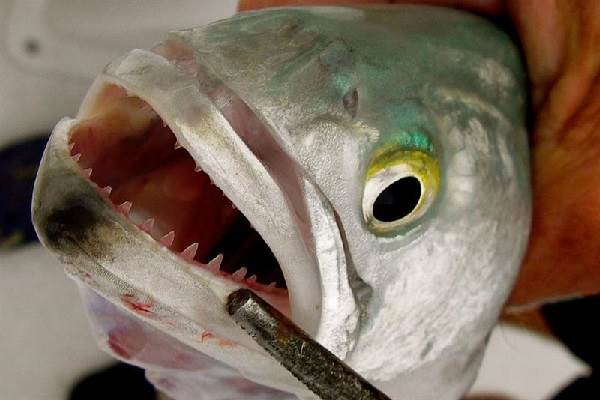 Fish lufar isn’t dangerous to the person. In depth after a meeting with the scuba diver the pack rushes to flight. Only the hooked fish who desperately resists can put damages.

In what reservoirs meets

Many fishers are sure that lufar – fish who is found only in the Black Sea, sometimes appears in the Azov waters, the Strait of Kerch. It, really, the main havens of a predator, but big slip-ups lufar live in waters of a moderate belt and subtropics of Atlantic. At Silent and Indian oceans slip-ups of predators aren’t a rarity.

Warm waters of the Mediterranean Sea, the coast of Africa attract migrating lufar. Under the influence of temperatures and atmospheric pressure the sea predator can plunge on depth, stay in the thickness of water and float at a surface.

Food of a sea predator is small and average fish. Speed of hunting attacks is so high that scientists long couldn’t define, how exactly lufar catches and swallows production. In a pursuit he promptly jumps over water, falling suppresses the victim. Only modern videos, the slowed-down viewing opened riddles of his behavior.

Supervision over a water surface are prompted where lufar feast. As fresh-water perches, predators attack collectively for a slip-up section, and then pursue singles, destroying at reckless speed. Spinning of seagulls often gives out a place of a lunch of the lufary.

Speed of eating of the victims generated the widespread myth about greed lufar which ruins fishes more, than can eat. Assumed a production nadkusyvaniye a predator, but interpretation of records refuted this theory.

Meat carcasses lufar are very much highly appreciated. In structure to 3% of fat and more than 20% of protein. Tasty meat of a dense consistence is carried to the category of delicacies which can be used fresh.

Fish is also salted, dried. Gentle taste of a sea predator is known to experts on the Western Atlantic, Brazil, Venezuela, Australia, the USA, the African countries. In meat practically there are no small bones. 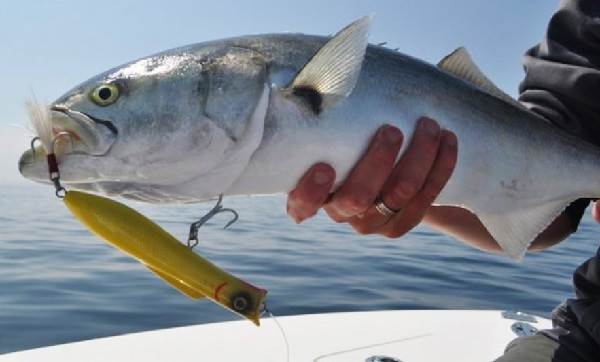 Cleaning of small scales is possible. The saturation of fish vitamins, microcells, does it by a useful product. In the Russian market sometimes it is possible to find lufar on sale under the name «grouper».

Fans of fish dishes should consider that in preparation fresh lufar it is necessary to be very careful: among its fins there are poisonous needles capable at defeat to cause paralysis of extremities.

In the middle of the last century Black Sea lufar field men caught in hundreds of tons. But population number was sharply reduced since then. Fish comes across in the put seines, but more often her catch for the sake of interest.

Catching lufar – object of sports fishing by means of a spinning. The active biting is observed early in the morning or in the evening, during hunting of a predator. Come across a hook durable lufar will resist to the last forces, to pull out it from water extremely difficult.

Fish makes desperate breakthroughs, sharply plunges into depth or jumps out of water. Fight can last for hours. The excellent skill, knowledge of habits of fish, force and patience is required to overcome resistance of a predator.

Quite often comes out the winner lufar which manage to get rid as a result of cunning manipulations of a hook. Skilled fishers seek to cut at once fish. When the hook strongly is fixed in a mouth, establish a brake and vyvazhivat a predator.

For fishing the two-handled spinning equipped with the inertial coil and a scaffold with a diameter of 0,4-0,5 mm is good. Among inertialess it is possible to choose «Dolphin». The spinner is necessary extended in a form, with the present concave part. The depression in the ground is filled in with the melted tin. The weighted spinner more attracts fish and sinkers aren’t necessary.

At coast of a lufara appear infrequently, only after storm, usually catch them from motor boats. To guess in sea open spaces where fish, difficult lives. Catching at random seldom attracts single predators.

Slip-ups give out splashes over water, hubbub of the seagulls attracted with a fish feast. Chances of successful fishing increase nozzles of slices of a jack mackerel, a hamsa, a sarganchik if to move their meters 70-90 round the boat. Fish hunting is continued from the middle of summer to late fall while flocks of small fish turn near coast.

The maturity lufar comes in 2 — 4 years. The predator only in thoroughly heated-up water, since the beginning of June until the end of August spawns. Females vymetyvat floating caviar directly in the sea, several portions. 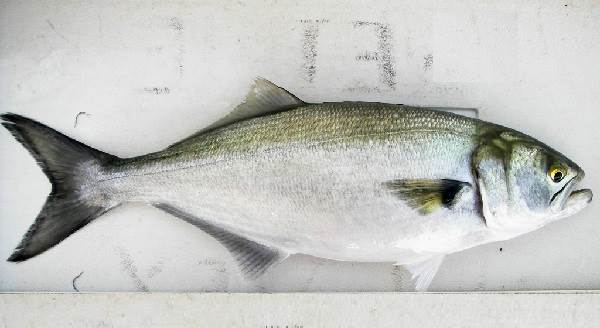 High fertility rescues population from disappearance, after all caviar feeds other fish, and her most part simply perishes. Large females postpone hundreds of thousands, until 1 million berries from which if they escape, in two days floating larvae are removed.

They tiny by the size, are comparable with a zooplankton. Are carried by a current of a larva on long distances. It is extremely difficult to scientist to study all mechanisms of reproduction.

In a diet thresh a cancroid trifle, invertebrate organisms. When the body of a whitebait increases to 8-11 cm, food changes – the real predator wakens. Fish becomes the main food. Populations lufary significantly change from time to time: there are extinction periods which alternate with abundance stages.