Mamba is a black snake. The lifestyle and habitat of the black mamba

Black mamba is considered one of the most dangerous, speedy and fearless snakes. The genus Dendroaspis, to which this reptile belongs, in Latin means literally «tree snake». Contrary to its name, its color is often not black (in contrast to the mouth, thanks to which she, in fact, got her nickname).

The people are frankly afraid of her and even afraid to pronounce her real name, so that inadvertently she did not hear him and did not take this gesture for an invitation to visit, replacing him with the allegorical «she who takes revenge for the injuries inflicted». 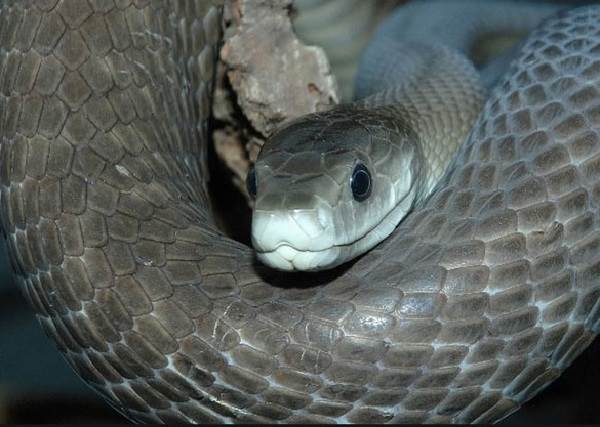 Despite all the existing superstitions behind which ordinary fear lies, scientists also confirm that the black mamba snake is in fact not only one of the most venomous snakes on the entire planet, but also has extremely aggressive behavior.

Features and habitat of the black mamba

The size of the black mamba is widely recognized as the largest among other varieties of this genus. Perhaps, that is why it is the least adapted for dwelling on trees and most often it can be found amid rare bushes.

Adult individuals reach a length of up to three meters, although individual cases have been recorded, when the length of some specimens exceeded four and a half meters. During the movement, this snake is capable of speeding above eleven kilometers per hour, on an even surface, the speed of its throws can reach twenty kilometers per hour.

The color of adult representatives of this variety is most often from dark brown to black, although there are individuals with a rather mottled color. In youth, the color of these snakes is usually less saturated and ranges from dirty white to light brown. 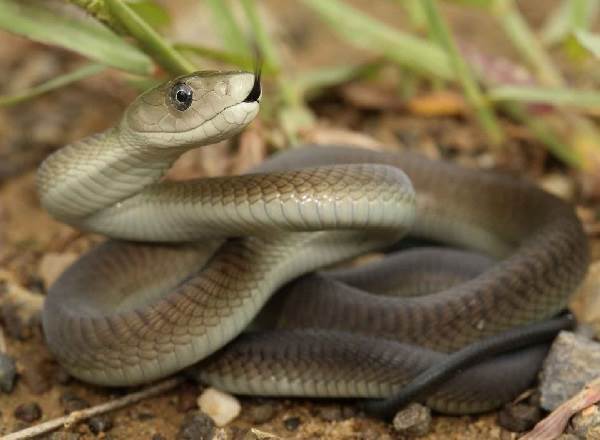 Black mamba lives mainly in the territories from Somalia to Senegal and from South West Africa to Ethiopia. It is also distributed in Southern Sudan, Tanzania, Kenya, Namibia, Botswana, Zimbabwe and the Democratic Republic of the Congo.

Since it is not adapted to life on trees, it is virtually impossible to meet it in tropical storm jungles. The main area of ​​its habitat are the slopes, strewn with stones, valleys of rivers, savannas and rare forests with small thickets of various shrubs. Since most of the land, where the representatives of the genus Dendroaspis used to live, is currently occupied by man, the black mamba is forced to settle near small villages and settlements. 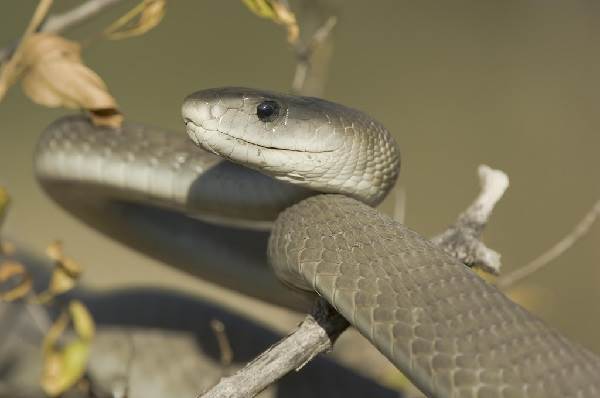 One of the places where this snake loves to be located is the reed thickets, where, in fact, the main quantity of its attacks on a person occurs. Also, quite often representatives of this genus inhabit abandoned termites, clefts and hollows of trees located at a relatively low altitude.

The nature and way of life of the black mamba

Black mamba — a poisonous snake, and its difference from other reptiles, dangerous to humans — in an incredibly aggressive behavior. There are often cases when it attacks first, without waiting for an immediate threat from people.

Raising the upper part of his own body and placing a support on the tail, she makes a rapid ejection towards her victim, biting her for a split second and not letting her come to her senses. Often, before attacking a person, she opens her mouth wide awesome black, which can frighten even people with strong nerves.

It is believed that a dose of poison that can lead to a fatal outcome starts from fifteen milligrams, but literally for one bite of a black mamba a person can get an amount ten to twenty times that figure. 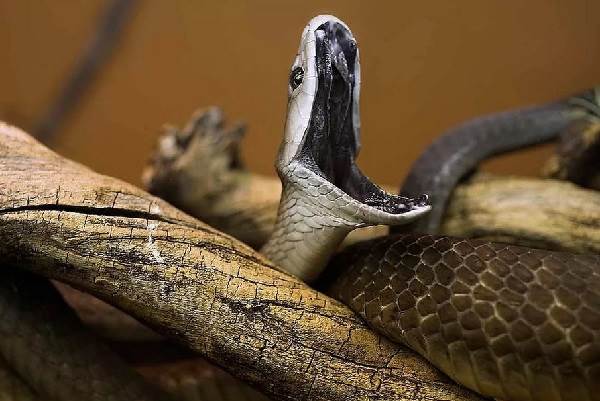 Black mamba got its name for the color of the mouth

In the event that a person is bitten by this dangerous snake, he must enter the antidote for four hours, but if the bite falls directly into the face, then after some fifteen to twenty minutes he may die of paralysis.

The poison of black mamba contains a huge number of high-speed neurotoxins, as well as kalitsiseptin, which is incredibly dangerous for the cardio system, causing not only muscle stupor and destruction of the nervous system, but also suffocation along with cardiac arrest. If you do not enter the antidote, then death occurs in a hundred percent of the cases. Rumors circulate in the people that one such snake hit several individuals of cattle and horses at a time.

To date, special polyvalent serums have been developed which, if dosed in a timely manner, can neutralize the poison, respectively, with a black mamba bite, urgent medical intervention is urgently needed. Despite all their aggressiveness, these snakes are not often the first to attack people, except in the case of self-defense. 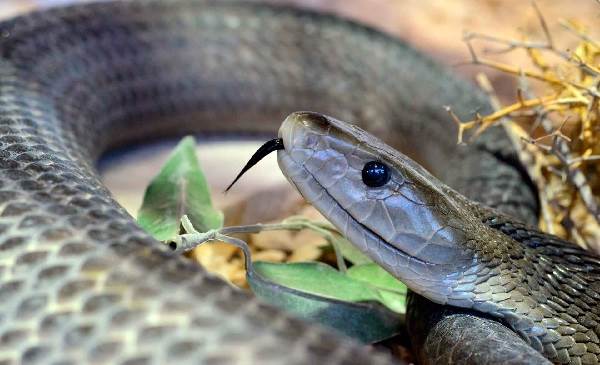 Most often they just try to freeze on the spot or get away from direct contact. If the bite does occur, the person’s body temperature rises rapidly and he begins to intensively fever, so it’s best not to meet her face to face, limiting himself to viewing a photo of a black mamba on the Internet or reading reviews about a black mamba on the vast webs of the World Wide Web.

About a black mamb, you can definitely say that this snake perfectly orientates in the surrounding space equally well both in the dark and in the light of the day. Therefore, she can go hunting when she likes. In the diet of her diet includes a huge number of various warm-blooded representatives of the animal world from protein, various rodents and birds to bats.

Occasionally its prey becomes some species of reptiles. The snake of the black mamba also feeds on frogs, although in exceptional cases, preferring other foods to them. Hunts snake data in about the same way: first they quietly creep up to their victim, then bite it and crawl to the side in anticipation of her death. 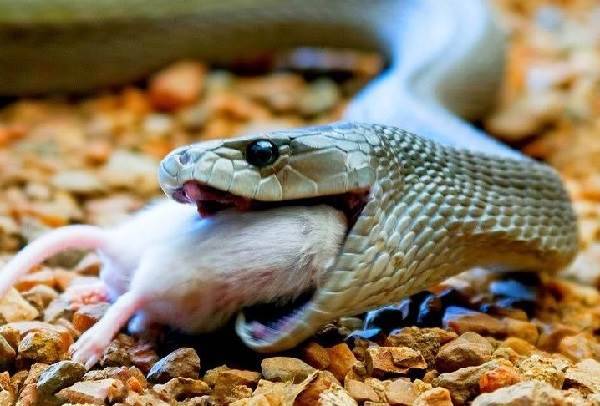 In the event that the concentration of the poison was insufficient for a rapid lethal outcome, they can crawl out of the shelter for a re-bite. As mentioned above, these reptiles are record holders among the other snakes in speed of movement, so it is very difficult to hide from them to the victim.

The mating period for a black mamba usually takes place from the end of spring and until the beginning of summer. Males come into each other’s fights for the right to possess a female.

Weaving into a knot, they begin to beat each other with their heads, while the weakest is not retired from the battlefield. It should be noted that in this case they do not use poison against their own kind, giving the right to the loser to escape unhindered.

Immediately after the mating of the snake, everyone dives into his own nest. The number of eggs per clutch can reach up to two dozen. Small snakes appear about a month later, and their length can already exceed half a meter. Literally since birth they have a powerful poison and can independently hunt small rodents.

The lifespan of these snakes in captivity conditions reaches twelve years, in the wild — about ten, because despite their danger they have enemies, for example, mongooses, on which the poison of the black mamba has no effect or wild boars.

Mole is an animal. Description, features, species, lifestyle and habitat of a mole