Peculiarities and habitat of manatee

Manatees — sea cows, which are usually called so for a leisurely lifestyle, huge size and vegetarian eating habits. These mammals belong to the order of sirens, prefer to stay in shallow water, eating a variety of algae. In addition to cows, they are often compared to dugongs, although manatees have a different shape of the skull and tail, more like a paddle than a fork, like a dugong. Another animal with which the manatee may be associated is the elephant, but this association is caused not only by the size of both these mammals, but also by physiological factors. 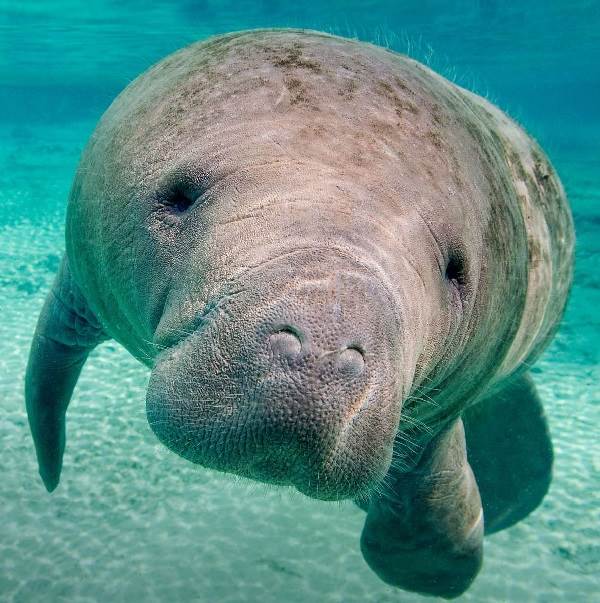 In manatees, like in elephants, there is a change of molar teeth throughout life. New teeth grow further in a row and eventually replace old ones. Also, elephant seal flippers have hoofs that resemble the nails of the terrestrial counterparts.

The weight of an adult healthy manatee can be from 400 to 550 kilograms, with a total body length of about 3 meters. There are surprising cases when the manatee reached a weight of 1,700 kilograms with a length of 3.5 meters.

Usually, females become exceptions, as they are larger and heavier than males. When born, the baby — manatee has a weight of about 30 kilograms. You can meet this unusual animal in the coastal waters of America, in the Caribbean. 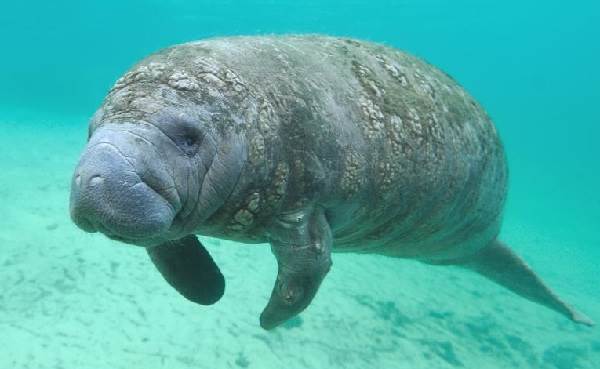 It is customary to distinguish three main types of manatees: African, Amazonian, and American. African sea cows — manatees are found in African waters, Amazonian — South America, and American — in West India. The mammal feels great in both salty sea and fresh river water.

Earlier there was an active hunt for elephant seals due to the large amount of meat and fat, but now hunting is strictly prohibited. Despite this, the American manatee is considered an endangered species, since the influence of man on its natural habitat significantly reduced the population.

An interesting fact is that the manatees have no natural enemies among other inhabitants of the waters, their only enemy is man. Damage to elephant seals is done by fishing gear, which the manatee swallows with algae. 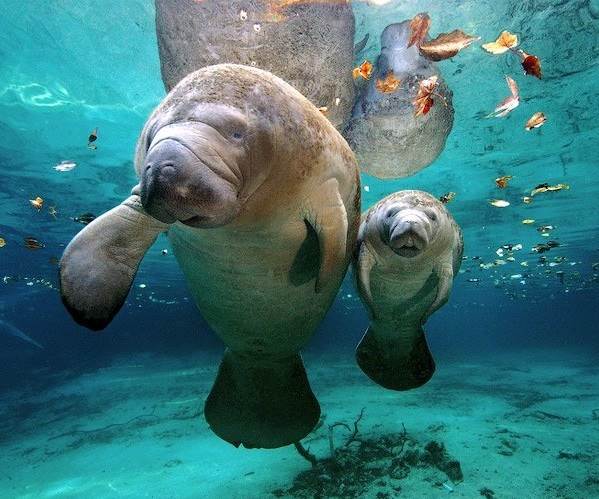 Getting into the digestive tract, fishing line and tackle painfully kill the animal from the inside. Also, the most dangerous are the screws of the boats, the engine of which the animal does not hear physically, since it can perceive only high frequencies. It is believed that before the genus consisted of about 20 species, however, modern man witnessed the life of only 3 of them.

At the same time, the Steller’s cow disappeared due to human influence in the 18th century, the American manatee is in danger of extinction, like the dugong, which, unfortunately, can receive the same status in the near future. 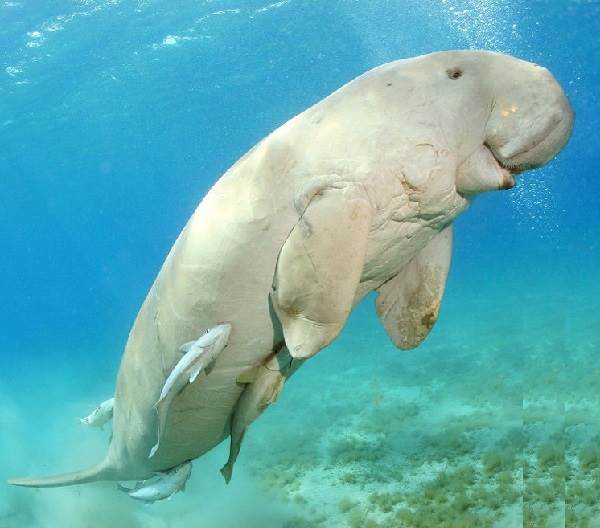 In addition, human influence on the life of these animals has significantly changed the process of annual migration in some areas. For example, having become accustomed to constantly warm water near power plants, sea manatees stopped migrating to survive the cold season.

It would seem that this is a frivolous problem, since the work of the manatee stations does not interfere with anything, however, recently many power stations have been closed, and elephant seals have forgotten their natural migration routes. The US Wildlife Service is addressing this issue by exploring options for heating water specifically for manatees.

There is a legend that when he saw a manatee singing a song for the first time, that is, he was making lingering sounds characteristic of him, sea travelers took him for an excellent mermaid.

The nature and lifestyle of the manatee

It would seem, judging by the pictures, the manatee is a huge terrible sea animal, however, these giant mammals are absolutely harmless. Even on the contrary — manatees have a very curious, meek and trusting character. They also adapt easily to captivity and are easily tamed. 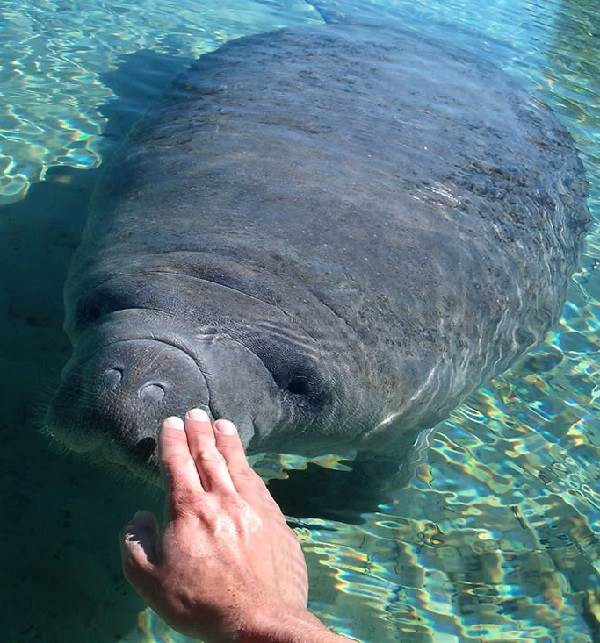 In search of food, which a huge amount of sea elephant needs every day, the animal is able to overcome monstrous distances, moving from sea salt water to the mouths of rivers and back. Manatee feels as comfortable as possible at a depth of 1-5 meters; as a rule, the animal does not descend deeper unless desperate circumstances require it.

The color of the adult manatee in the photo is different from the color of babies who are born much darker than their parents gray-blue. The long body of the mammal is dotted with small hairs, the top layer of the skin covering is being constantly updated all the time to avoid the accumulation of seaweed. 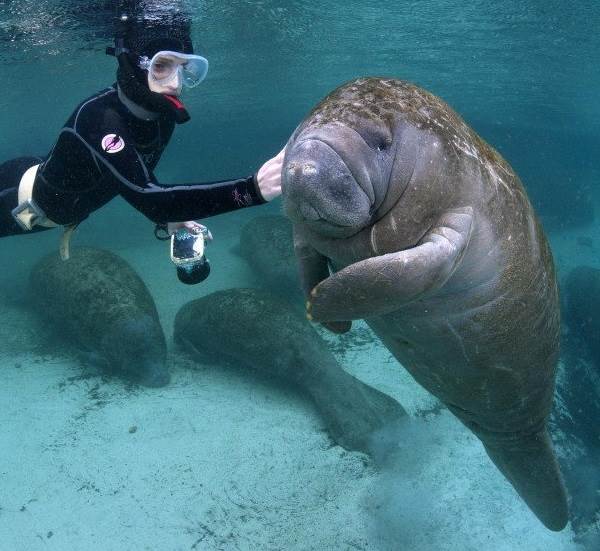 Manatee cleverly wields enormous paws, sending algae and other food into the mouth with their help. As a rule, manatees live alone, only sometimes forming groups. It happens during mating games, when several males can look after one female. Peaceful elephant seals do not fight for territory and social status.

Daily manatee absorbs about 30 kilograms of algae to maintain a huge weight. Often, food has to be searched for, sailing long distances and even moving to the fresh waters of rivers. Any kind of algae is of interest for the manatee, occasionally a vegetarian diet is diluted with small fish and various invertebrate species.

Manatee males become ready for the first mating only when they reach 10 years old, females mature faster — they are able to bear offspring from 4-5 years old. Several males can take care of one female at once, until she gives preference to any of them. Dates of pregnancy vary from 12 to 14 months. 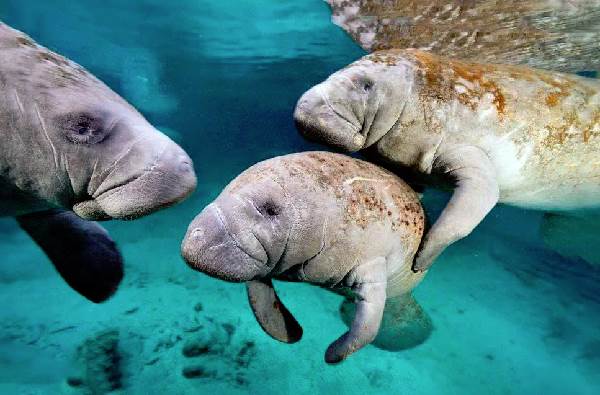 Baby-manatee immediately after birth can reach 1 meter in length and weigh up to 30 pounds. For 18–20 months, the mother carefully feeds the calf with milk, despite the fact that the baby can look for and absorb food on her own from the age of 3 weeks.

Many scientists attribute this behavior to the fact that the connection between mother and baby in manatees is surprisingly strong for representatives of the animal world and can last for many years, even for a lifetime. A healthy adult can live 55 — 60 years.