Features and habitat of the mandrillus

Nature gives animals , sometimes, quite unusual coloring. One of the bright, unusually colored mammals is mandrill . This primate seems to have collected all the colors of the rainbow for its decoration. 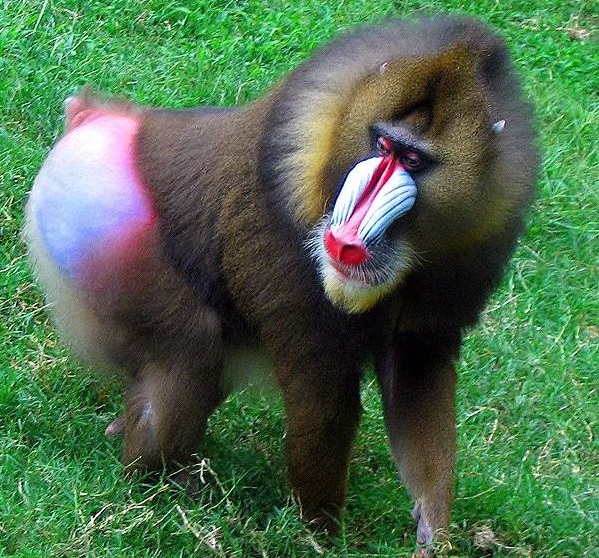 His nose is bright red, bony grooves are located near the nose, which are blue or rich blue, the beard and hair on the face are yellow, in some representatives orange or white.

Buttocks also sparkle with beauty — their color can be from red to deep blue and even purple. At the same time, the coat that covers the whole body and head may be brown or brown, and even olive. In this case, the stomach is painted in light colors.

Males flaunt with particularly bright colors, females are painted a little paler. The size of this monkey is quite large. The sexually mature male can reach a weight of up to 50 kg, and its growth reaches 80 cm. Females are almost half the size. They weigh from 12 to 15 kg, and are no more than 60 cm tall.

The muzzle is elongated forward, the ears are medium, the tail is short, only about 6 cm. This monkey walks on four limbs, resting on its fingers. Mandrill lives in equatorial forests, the most suitable for him is the climate of the terrain of Gabon, Cameroon, can be found in the Republic of Congo. 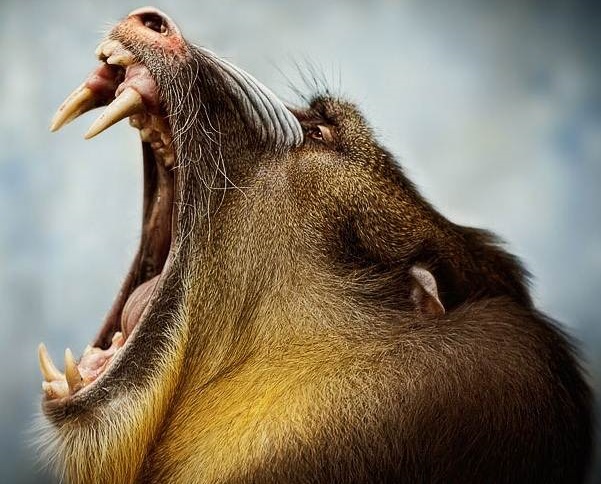 For the bright coloring of these monkeys like to contain all sorts of zoos. Good content in captivity often gives rise to life to new hybrids. For example, when a mandrill is crossed with a baboon, a mandrill with a mangabey, a mandrill with a dril, quite healthy offspring appears. And this scientists were able to confirm. But the union of mandrill and macaque gave the young very weak, non-viable.

The nature and lifestyle of the mandrill

Mandrills prefer to live monkeys in small flocks, which are not created for one year, but, practically, for the entire lifetime of the individual or for a very long time.

In one such pack there can be, as a rule, up to 30 individuals. Not rarely happens more. For example, the mandrill group is known, whose number reached 1,300 heads (National Park. Gabon).

It happens that in difficult life periods (drought) several families unite into one. But this phenomenon is temporary, in the usual mode there are no random “passers-by” in the flock, the whole group consists of relatives.

At the head of each such family group is the leader, whose authority is indisputable. It is he who keeps order in the whole flock, does not allow any quarrels, and both females and young monkeys, and even males, whose rank is not so high, obey him. 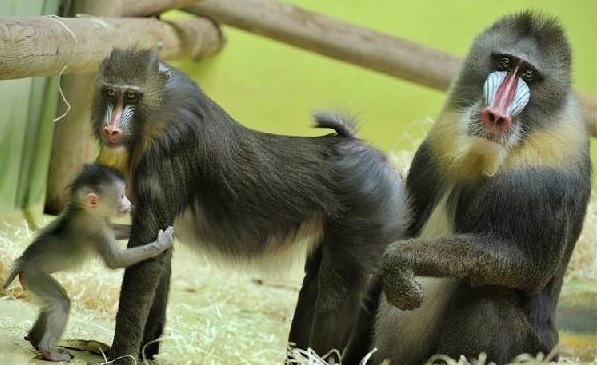 Peaceful these handsome can not be called, they are quite aggressive. With any disobedience, a rather fierce battle ensues. In addition, the elucidation of the relationships between the males takes place daily.

Mandrills are sedentary, they mark their territory with a special liquid, do not welcome outsiders and know how to protect it. The territory is guarded constantly — during the day monkeys bypass their possessions necessarily.

In addition, the monkeys look for food during the day, play with their babies, communicate with each other, and only at night go to the trees to sleep.

In feeding, these monkeys are not picky, they are omnivores. This is also proved by their teeth. Basically, the mandrill feeds on plants and insects. Its menu includes tree bark, plant leaves, stalks, fruits, beetles , snails , scorpions, various ants and termites. Monkeys will not refuse from bird eggs, from chicks, from small rodents and frogs .

Despite the fact that the mandrill has rather large canines, animal food makes up only 5% of the total diet. They have enough plants and small animals. They take out their food with their fingers, cleverly freeing the fruit from excess leaves or peel. 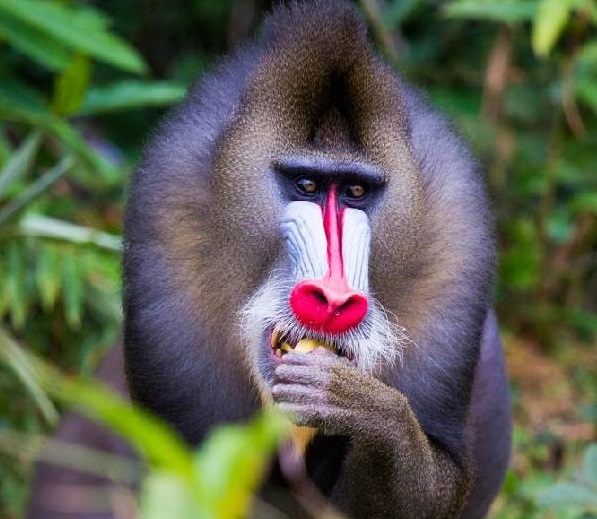 In addition to the fact that food mandrils are mined independently, they also use what remains of their compatriots. For example, monkeys eat in trees, and from there falls a lot of leftovers. Mandrills willingly eat up what has fallen from the monkeys.

Reproduction and life expectancy of the mandrillus

Females are capable of producing offspring already 39 months after their birth. Mating can occur at any time when the female has the most favorable time of her sexual cycle.

Willingness to mate in males and females can be seen by the color of the skin in the genital area. When hormone levels increase, skin color becomes brighter. In addition, females also change the size of this zone.

The mandrill male can choose any female for mating, which is in a favorable period, but females can mate only with the leader, the leader of the pack will not allow any “love”. 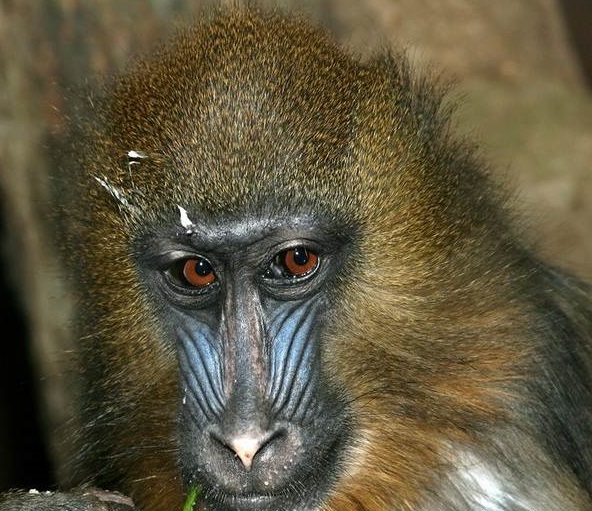 In the photo female madrila

Therefore, all the kids in the pack may have different mothers, but the father is the same for everyone. And it will be as long as the leader is not replaced by a younger and stronger male, able to win back the pack from the aging leader.

After mating, 245 days will pass, and one baby will be born. At first, the mother wears it on the chest, but only the cub will get a little stronger, as it immediately moves to the mother’s back.

Females feed the baby with milk. On average, they feed him for up to 10 months, but even after that, slightly grown cubs stay close to their mother. Even at the age of three, young monkeys come to their mother at night, during sleep.

While the mandrills are small, they love to play, they like being with their mother, they willingly sit with her for hours when she takes care of them. They are not at all aggressive and very timid. When a cub grows up, it occupies the lowest step of the hierarchical ladder. 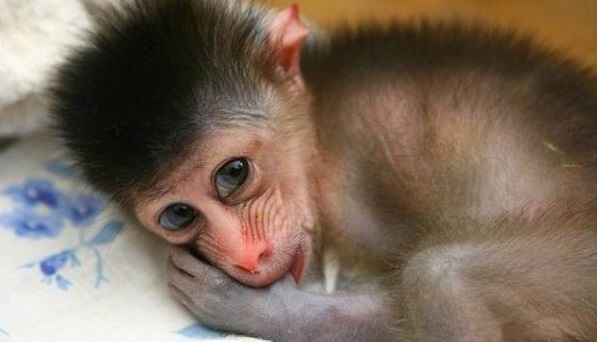 In the photo the baby is a mandrel

After a young male turns 4-5 years old, that is, when he becomes sexually mature, he begins to fight with his father, that is, to declare himself as a leader. But not everyone can achieve leadership positions, and not immediately.

A young female for a very long time will not be able to claim a privileged position. After all, her status depends on how many calves she brought.

Moreover, only surviving pups are considered. Of course, the pack leader’s attitude towards her also plays a significant role. The average life expectancy mandrill reaches 30 years.