A maned wolf is a very interesting individual of the fauna, which belongs to the family of canids. He has a very refined appearance that resembles a fox, rather than a wolf. 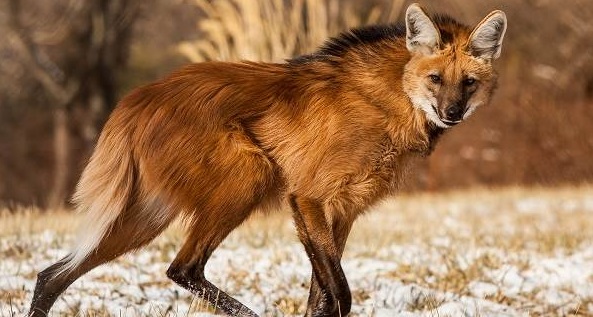 But, nothing connects with the fox of this wolf — there is no kinship between them. Even their pupils are not vertical, like foxes. Argued that this wolf is descended from a family of canines. Maned wolf is from South America.

The maned wolf lives in shrubby and grassy plains, as well as on the outskirts of marshes. It does not occur in the mountains. It lives in areas inhabited by small rodents and small animals, which it hunts and feeds itself and its offspring.

This predator has rather slender legs. They are long and thin. You can say «model». But, despite the length of their legs, wolves are not endowed with the ability to run fast. 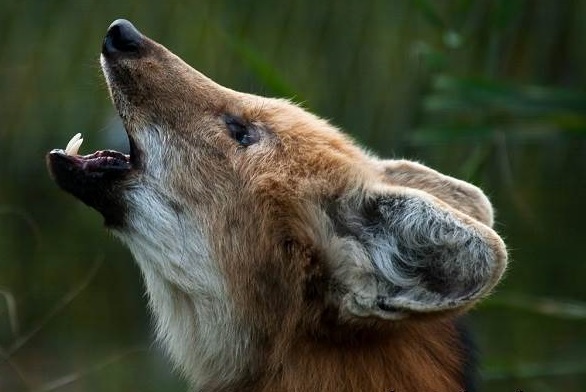 We can say that his long legs are not given to him for beauty, but for survival in the natural environment. But, on the other hand, the wolf, thanks to its long legs, sees everything from afar, where the prey is, and where danger awaits in the form of a man.

The legs of a wolf are its very interesting feature and, one might say, a gift from above. Most likely, it is about this wolf proverb «The wolf’s legs are fed.» Indeed, thanks to them, the wolf sees everything. The predator’s coat is very soft. The muzzle and neck are elongated, just like the external signs of a fox. The chest is flat, the tail is short, the ears are erect. Wool is thick and soft. 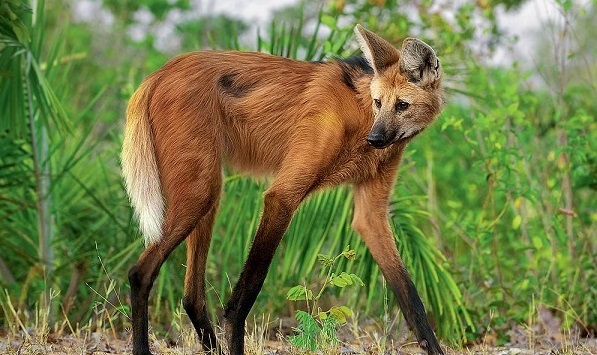 And the color is reddish brown. Chin and tail — light. Their legs are dark. Wool around the neck is much longer than on the body. If the wolf is scared or trying to scare, then this wrinkled coat stands on end.

Hence the name «Maned wolf.» This predator has 42 teeth, like those of the canine family. The voice of this beast is very diverse, it varies depending on the situation. Wolves communicate with a long, loud and drawn-out howl, drive away and frighten rivals with grumbling very deaf, and at sunset they just bark loudly. 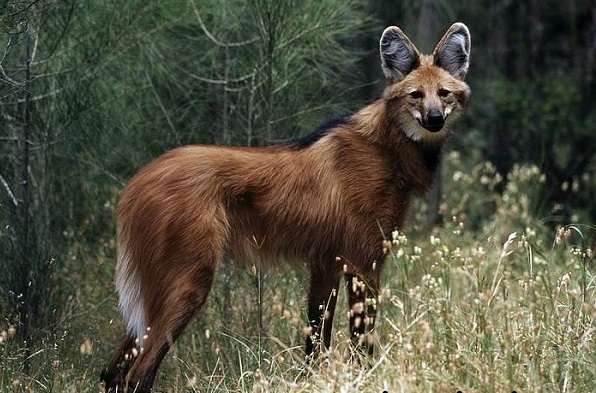 Maned wolves, like all their brethren, are usually nocturnal. They hunt, mostly at night. Happy — they rest. They are very difficult to see, as they are on the verge of extermination and are afraid to appear on the eyes of a person. Only in exceptional cases they may seem.

The hunt takes quite a long time — the predator is sitting in ambush, waiting for its prey and picks up the most suitable moment to attack. Big ears very well help him to hear the prey, wherever it is, whether it is thick or tall grass, long legs will do their job, showing the wolf prey. Predator forepaw knocks on the ground, as if scaring prey, and then instantly jerks it. In almost all cases, he reaches the goal, leaving the victim no chance for life. 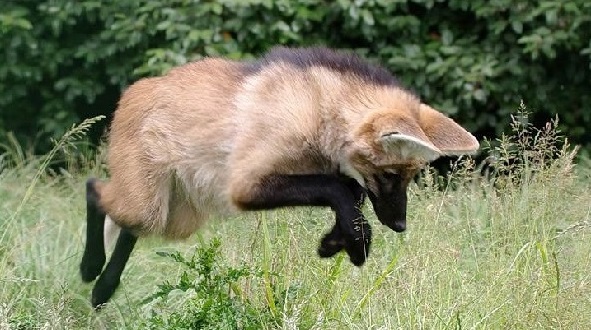 Females and males in their natural environment live on the same territory, but they hunt and sleep separately from each other. But when animals live in captivity, they raise children together. Males protect their territory, wolf clearly puts uninvited guests in place. These animals, by their nature, are very good-natured towards each other. Rarely there are such cases when a predator attacks a similar one.

Wolves are inherently lonely and they do not live in a flock. Wolves do not have enemies among animals. But man is the main enemy of this predator. People exterminate these animals due to the fact that they are frequent guests in their barns.

Predators feed mainly on small animals (birds, snails, insects, eggs), swallowing food and not chewing at all, as they have rather weak jaws to feed on large animals. 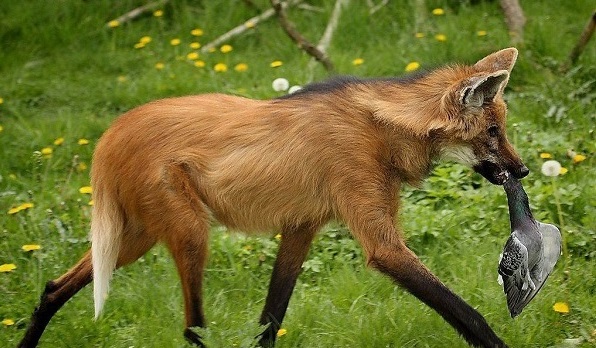 he jaws are not so developed as to break and chop up hard, huge bone. Also, they are not averse to eat poultry, thereby setting a person against himself. Of course, such cases happen rarely, but still happen. To great joy, they are not attacking people, not a single case of attack has been recorded yet. The wolf is also good-natured to man. In addition to meat, these animals eat vegetable food, preferring bananas. Also, wolves love to eat a fruit like wolfberry.

Wolfberry is considered to be very poisonous, but it helps the predator to get rid of many parasites that live in its body. But, it is a very interesting fact that in the period of ripening berries, such as strawberries, strawberries and other similar ones, the predator may well include them in its diet.

Reproduction and lifespan of a maned wolf

Predators mate in October — February, or in August — October, depending on the hemisphere and place of residence. A very interesting fact is that wolves, unlike canids, do not dig holes. 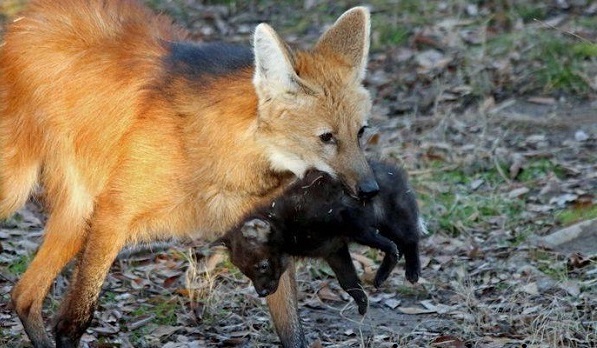 On the photo is a maned wolf with a cub.

They prefer to dwell on the surface. Pregnancy lasts about two months in females. The female has from two to six pups. Puppies are born in winter. Pregnancy in females of the wolf lasts about 63 days. Puppies weigh about 400 grams, and they develop very quickly. Already on the ninth day they open their eyes, and on the fourth week the ears begin to rise.

Puppies are very playful and inquisitive. The males do not care for their cubs (at least such a fact has never been fixed) the entire responsibility for raising, feeding, and hunting training falls on the female of the maned wolf. 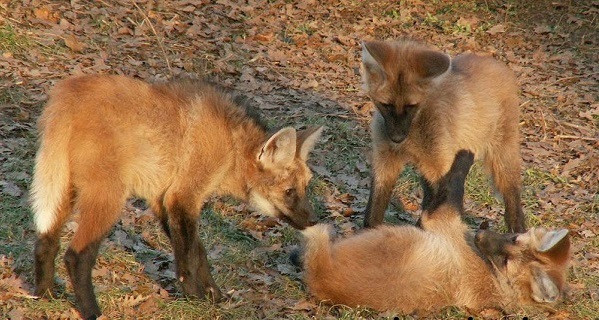 In the photo are young maned wolf

An interesting fact is that wolf children are born with short paws, their paws begin to lengthen as the cub grows. Thus, we can sum up that this animal has many positive qualities, rather than negative ones.

The most important quality is that he does not attack people. This is a very peaceful and quite adequate animal. It is a pity that the population does not grow from year to year, but treacherously falls. Maned wolves are on the verge of extinction, so this species of wolf is listed in the International Red Book.