This bizarre insect was given a curious speaking name because it has one characteristic physical feature. The mantis puts its front paws, as if praying to the Almighty. 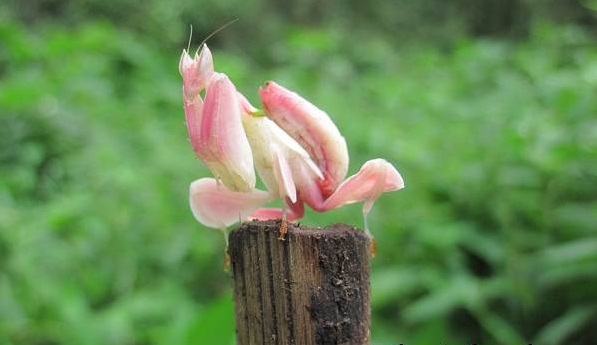 There are many guesses about the mantis. For example, it is believed that they have 100% art in mimicry and pretend to be leaves and sticks when in danger. There are versions that are not without reason that after mating females eat males. And each species of this insect is unique in its own way.

Orchid praying mantis is a very rare species. Insects are considered predators. It is curious that females are 3 cm longer than males — their growth varies between 5-6 cm. And the sex is determined by segments on the abdomen.

The males have eight, the females have six. The color of the orchid mantis varies from very light colors, including white, to rich pink. From this and the name went — the insect easily hides in the beautiful pink flowers of an orchid . 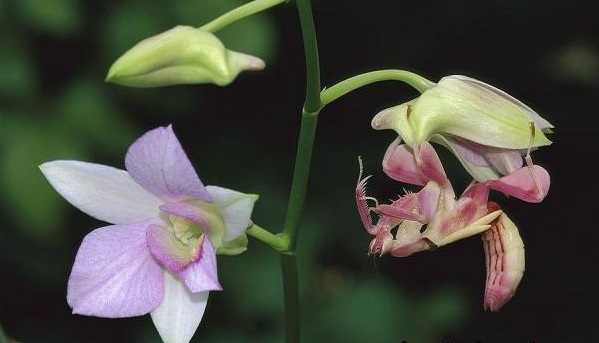 Also, besides coloring, the wide legs are also a masking function. From a distance they look like flower petals. Zoological specialists distinguish up to 14 species of orchids that can be imitated by an insect. It is also interesting that the males can fly.

In nature, praying mantises live in the humid tropics of such countries as India , Thailand, Malaysia, living in foliage, flowers of orchids. Exotic lovers keep animals and houses in special vertical terrariums, increasing the humidity in the devices to maximum values ​​during the molting period.

The main thing is to pour about three cm of peat type substrate to the bottom of the terrarium, and to stick the walls with branches and plants. Temperature is also important. Ideally, if it resembles the tropics — high humidity at 35 degrees during the day and 20 degrees at night. 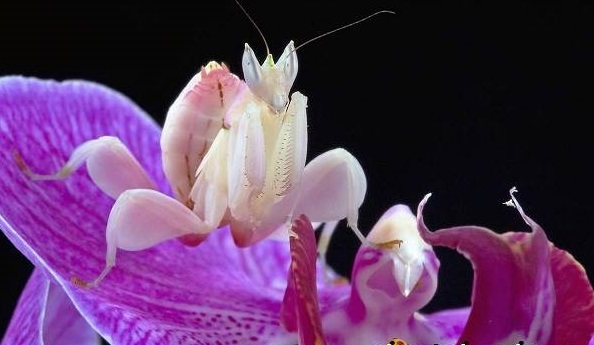 The popular joke that a female praying mantis eats its male after intercourse has its ground. Therefore, the orchid mantis in the photo looks much more harmless than in life. Females are aggressive to congeners, therefore if they are kept in artificial conditions, they are isolated from males.

However, if the female does not experience a very strong famine, she, unlike other species of this insect, will not attack the partner. Males, by the way, can be kept in groups — in the company of up to five individuals, they now feel excellently, thereby showing a sociable disposition.

But in general, breeders agree that orchid praying mantises have a very bad temper. The only thing that justifies their nasty character is their incredible appearance. 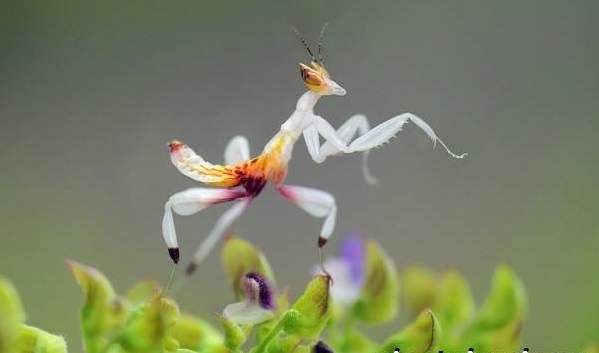 In the wild, pollinators such as flies, bees , butterflies and dragonflies are considered to be the basis of the diet for insects . Everything is eaten in a row, fell into the hands of a predator. From time to time the food of the orchid mantis can even include lizards, which are several times larger — the jaws of this reptile are so strong.

But if the mantis is contained in artificial conditions, it is undesirable to feed it with lizards. The best option — insects that do not exceed half of his own body.

The above does not mean that the insect categorically does not accept fiber. If we are talking about a piece of banana or other sweet fruit, saturated with potassium, the mantis will be happy to swallow the bait.

As already noted, the female can dine on the male, although this happens very rarely. But the wise nature has created a population so that there are an order of magnitude more males in it. 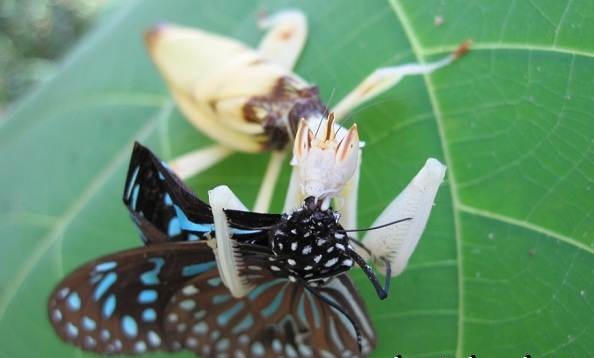 Orchid mantis is a predatory animal that feeds on other insects

It is important that the content of the orchid mantis in the artificial environment is not uncomfortable. Do not forget about the drinker with clean fresh water. It is recommended to update it every day.

In favorable conditions, females live for almost a year — up to 11-12 months. The age of males is usually twice as short. The puberty period of males also comes much faster. In part, this is influenced by not too impressive dimensions.

Therefore, it is necessary to equalize the possibilities of insects by artificial means — slowing down the development of some and accelerating the process of maturation of the second. In males, puberty occurs after five molts, in females — two molts later. Just in case, before pairing individuals, it is recommended to feed the female well.

When fertilization is completed, the female lays eggs in the edema — a peculiar bag of light tones. There may be four or five, sometimes six. If everything goes well, then the first depositary is postponed after seven days. 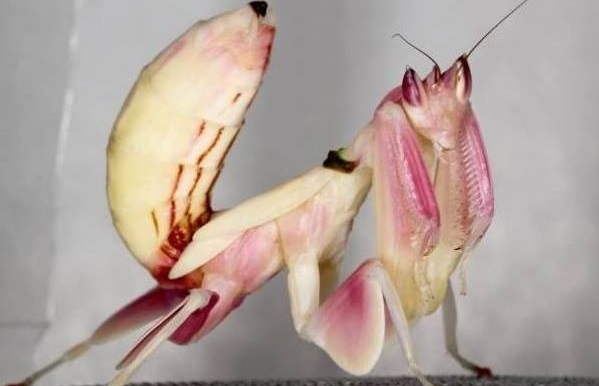 And replenishment in the family is worth waiting in one or two months. The ideal conditions for ripening are the tropics — thirty-degree heat and 90% humidity. The number of litters sometimes reaches 100 pieces. The larvae that barely hatched from the eggs are red and black in color and look like ants .

The cost of orchid mantis is 3000 rubles per individual. They are considered the most expensive representatives of the whole family. For example, an African woody or floral mantis will cost from 500 to 1000 rubles.

But in order to buy an orchid mantis , problems may arise. This amazing insect is a real exotic in Russia . Therefore, the best option is to advertise on the Internet. Rare, but possible purchase — in the pet store. 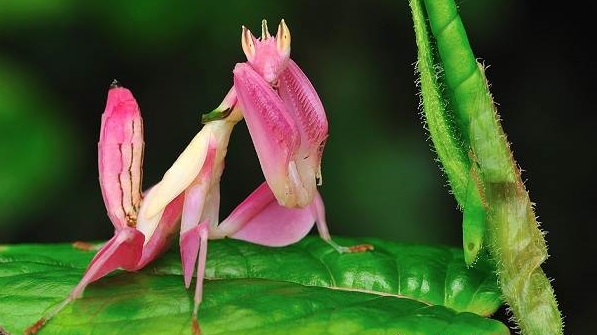 By the way, in the same global web there is a belief that this insect in the house brings happiness. As an additional bonus content can be called the absence of unnecessary sounds and smell. In addition, they do not need to pay attention, and the terrarium does not take up much space in the room.

To buy it is ideal to take insect larvae, which are called lyrically nymphs. If you buy an adult, it is likely that it will die quickly, and the owner will not wait for the offspring — after all, the life span of the praying mantis is already short.

Choosing the larvae, it is better to give preference to live animals, and before the acquisition it is necessary to carefully examine the legs for injuries. The belly should look full. An adult mantis can be identified by the presence of wings.

However, there are wingless individuals such as earthen praying mantis. In conclusion, it should be added that in spite of the fact that insects belong to predators, they do not pose a danger to humans. However, care in care does not hurt.