Breed of hens Maran is widely used in farms for the production of meat and eggs. The name of the birds is quite unusual for our latitudes — this is because they were named in honor of the French town, where they were bred by breeders. 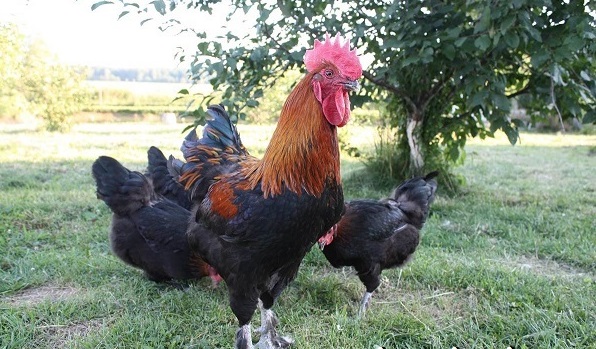 Since Maran is located in the cold part of France, chickens tolerate low temperatures very well. The chicken was presented to the public in 1914 at the annual exhibition — as a result, it was decided to award it with a gold prize.

Chickens Maran mainly grown in European countries. For very incomprehensible reasons, they are not very popular in the territory of our country — it is mainly specialized poultry yards that breed it.

Description and features of the breed of Maran chickens

Birds have a calm character, but at the same time they are in constant motion. From their lush plumage emanates a pleasant light shine. French chickens can be painted in different colors: black, copper, red, silver, gold, white and even blue shades.

Black-and-copper chickens Maran are much more common representatives of the plumage of other shades. Roosters have large golden spots on the breast, and feathers located on the back are painted in bright shades of red. Chickens of this species are almost black, in the neck area there are small gold inclusions resembling a necklace. 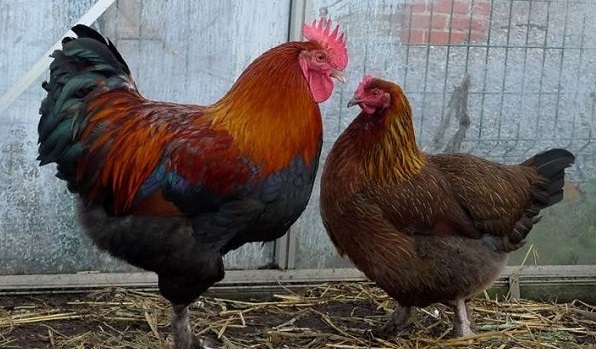 The second largest is the Maranov breed of silvery and golden so-called cuckoo coloring. The hen maran the cuckoo is famous for the characteristic color of the plumage: on the black body there are scattered feathers of gold or silver color, with gold feathers more on females, and silver ones on males. 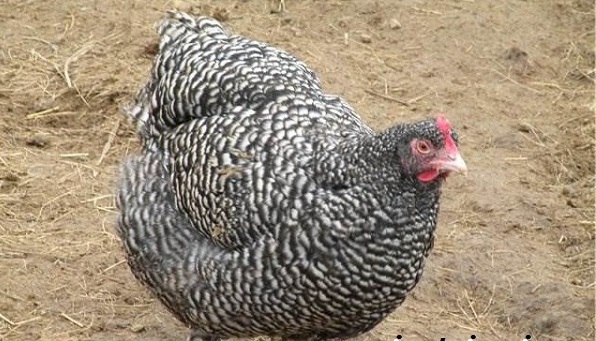 There are also wheat-colored chickens. The male’s plumage is black, the entire head and breast are decorated with golden spots. Feathers of females are completely painted in gold or light red color.

Blue Marana chickens deserve special attention: the plumage of these birds has a light ashen blue color, and copper-colored feathers cover the head. There are also miniature maran — dwarf. 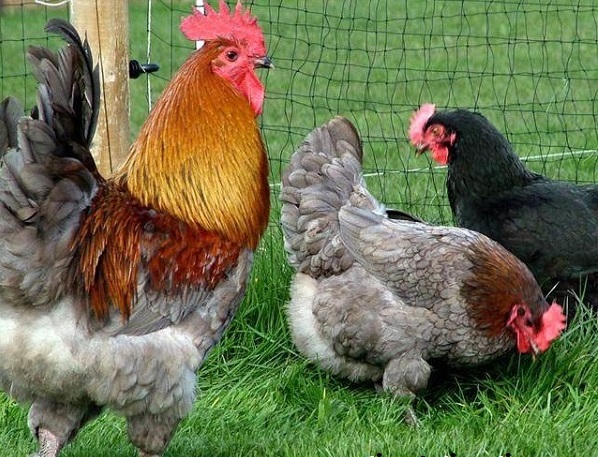 Representatives of the Colombian variety of marana are endowed with an interesting appearance: the chickens are absolutely white, around their neck black feathers form a ring. A general description of Maran chickens allows us to highlight the following basic facts:

In the photo, the maran chickens look important and even somewhat majestic. Because of the magnificent appearance of the people they are called «royal». 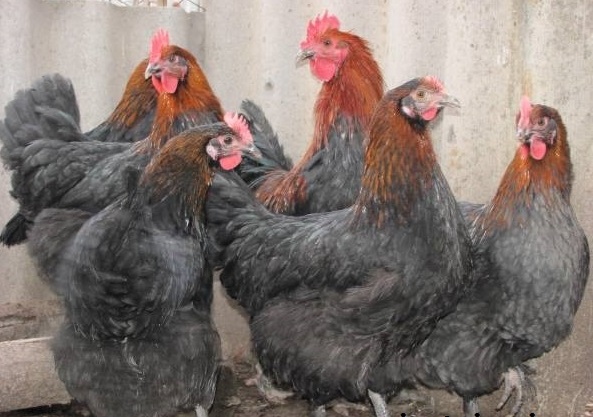 Care and maintenance of Maran chickens

Birds need to ensure a long light day and as much as possible spending time outside. In the cold season, the duration of an optimal daylight hours should not be less than 11 hours, in hot time — the more light, the better.

Popular black maran chickens like all other representatives of the French breed love open space: the fenced area for their habitat must have an impressive area. 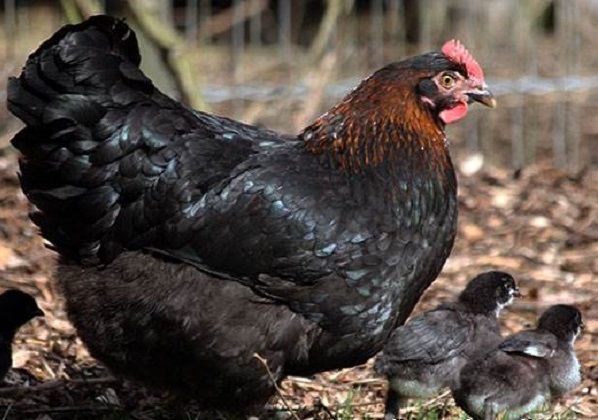 You also need to monitor the level of humidity in the hen house, if it is high enough, you need to air it regularly. The most suitable temperature for growing Maran breed chickens is +15 C.

Nutrition should be balanced and contain a large amount of vitamins and trace elements. The daily ration should consist of various grains and greens.

In order for the chickens to fly well and gain weight, they add purchased supplements to their food, as well as calcium and shell rock, which is needed for regular reproduction of eggs. To achieve this goal, the birds are also fed boiled fish and bone meal.

Chickens of this breed are grown in order to obtain excellent meat and delicious eggs. The hen carries about 150 eggs weighing about 70g a year, the color of which resembles the color of dark chocolate. 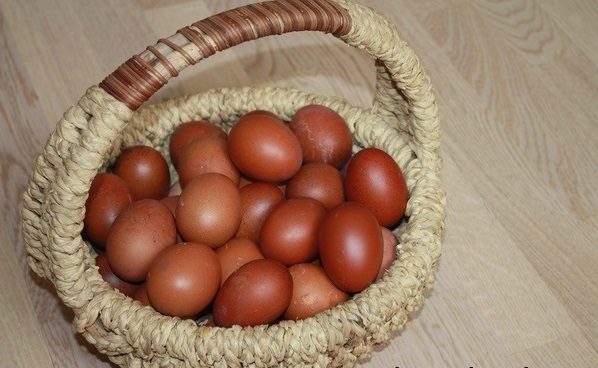 In the photo eggs Maran chickens

According to many experts, the eggs of the Maran chickens are the most delicious, because they have a well-pronounced characteristic taste. According to the opinion of people who contain birds, the tastes of eggs depend directly on the color of the shell: the darkest eggs have the richest taste. In the homeland of birds, their products are often consumed raw — experts are confident that the dense shell does not let the pathogenic bacteria inside.

Cultivation and food of hens Maran

The cultivation of chickens Maranov farmers according to the process is quite simple. There are two ways:1. The natural method — the eggs are left under the chicken, which will be engaged in the production of offspring.
2. Artificial method — eggs are taken from the chicken coop and placed in an incubator, where chickens are born under the influence of a regulated temperature.

To bring out the chickens most similar to the true breed, according to experts, you need to take the darkest eggs. Eggshell is famous for its high strength, so at the moment when the chickens are ready to leave the cozy shelter, you need to help them: moisten the air in the room up to 75% and pierce the casing opposite the beak, the location of which is determined by the sound that comes from the egg.

If the chickens were hatched in the second way, immediately after they appeared, they were moved to a box in which a piece of cloth had been placed. A grate is put on top of the box, and then the lamp is turned on and the temperature is kept at + 30 C.

The temperature is gradually reduced throughout the week, then the chicks can be taken out into the street under the warm sunshine (+20 and above). Please note that little chickens should not freeze, so you need to carefully monitor their health. 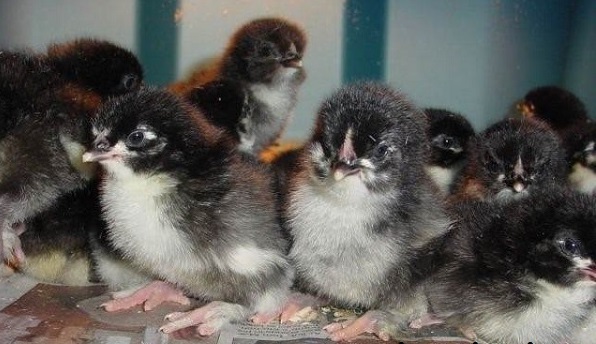 Feed the chickens according to a specific scheme:The first two days after birth, they should be fed boiled yolk.

Price and reviews of the breed of hens Maran

After analyzing all the reviews about the Maran chickens that have been left by people who keep birds for a long time, we can draw the following conclusions

Despite the large number of advantages, they also have a rather significant drawback — chickens often die because they cannot pierce a thick shell with their beak.

As a result, you need to constantly monitor the process of hatching in order to timely otkovyrnut the egg shell, so that the chicken is easier to get out.

If there is a desire to acquire such beauty, you can buy Maran chickens in large specialized farms, as well as from small farmers. You can also make purchases in European countries independently or through an intermediary.

The price of Maran chickens depends on age: weekly chicks cost 400-450 rubles, two-week-olds — 450-500, half-yearly birds — 5750- 6000. The cost of an incubation egg is 300-350 rubles. Majestic birds will certainly become the main highlight of any yard, and unusual eggs will surprise even the most fastidious gourmet.