Features and habitat of the marsh turtle

A common representative of the class of reptiles is the marsh turtle. The length of the body of this creature is from 12 to 35 cm, weight — about one and a half kilogram or slightly less. 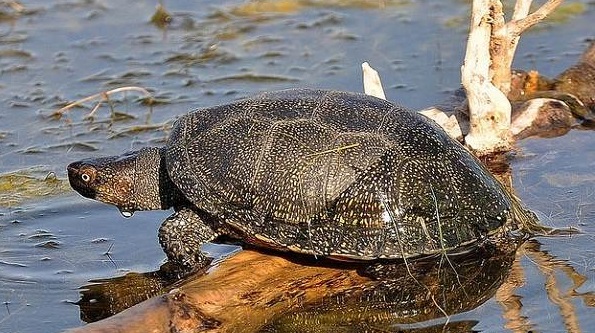 As can be seen in the photo, it is not difficult to distinguish marsh turtles from their relatives by the structure of a rounded low shell connected on the sides with the lower part of the body by elastic ligaments; as well as the absence of a beak on the face of the reptile and the following external features:

Representatives of the genus of marsh turtles are distributed throughout Europe, they can be found in the Middle East, in Turkmenistan, Kazakhstan, the Caucasus, as well as in north-western regions of Africa. 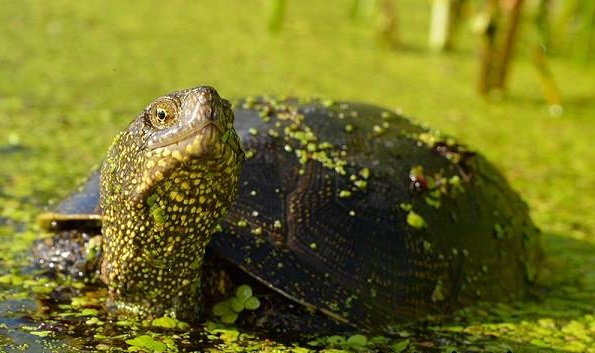 They inhabit the forests, forest-steppe and mountainous areas, trying to settle near water bodies, live not only in swamps, as the name suggests, but in rivers, streams, canals and ponds.

Character and way of life of a marsh turtle

These animals, belonging to the family of freshwater turtles, are active during the day, while at night they sleep at the bottom of water bodies. They feel great in the aquatic environment, where they can stay for about two days.

But on land, too, they feel perfectly, therefore, a marsh turtle can be found on large lawns, where these cold-blooded animals like to bask in the sun, thus feeding their bodies with energy. 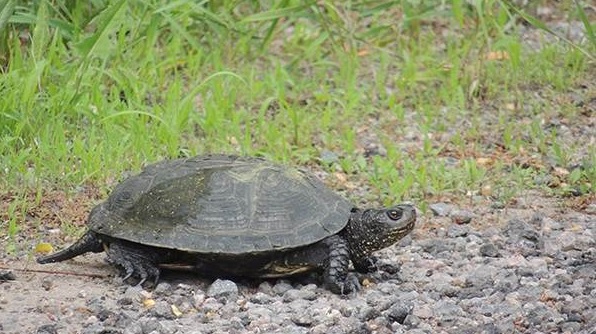 Marsh turtle feels great both in water and on land

They try to find other suitable places for sunbathing, often using snags and stones protruding from the water. Reptiles strive closer to the sun even on cloudy, cool days, despite the sky covered with clouds, trying to catch the sun’s rays penetrating through the clouds.

But in the event of the slightest danger, reptiles immediately flop into the water and hide in its depths among the underwater vegetation. The enemies of these creatures can be predatory animals and birds.

They also often do not expect anything good from a person, and in some countries of the East they are usually eaten, which causes considerable damage to the numbers of the species of marsh turtles. 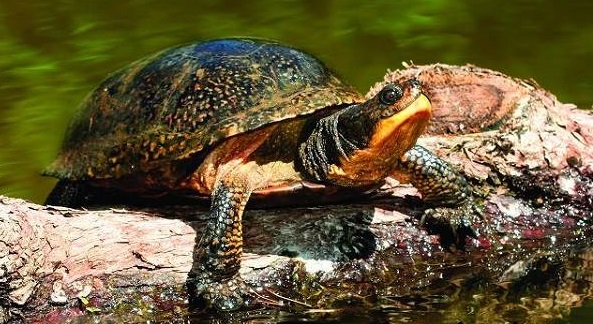 The sense of smell and vision of such reptiles are developed perfectly. Moving along the ground quite quickly, the turtles swim beautifully and quickly, and strong limbs help them in their movements in the water.

Paws of marsh turtles are equipped with large claws, which allows them to easily dig into a layer of leaves or muddy ground. In the wild, these reptiles hibernate during the cold season. This usually happens in early November and lasts until the end of April.

Considered to be quite rare, marsh turtles are in the Red Book. And although the total number of such animals is fairly stable, from some areas where they were found before, they have completely disappeared. 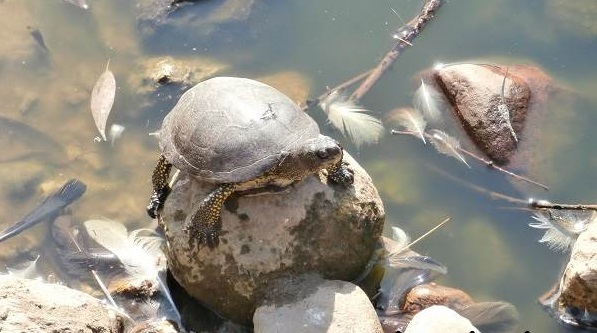 The European marsh turtle is considered to be a prominent representative of this genus. She is the owner of a smooth carapace, which has a round or oval shape.

Its color can be greenish-yellow or black with a pattern, dotted with various combinations of rays and lines, as well as white or yellow spots. When wet, the shell changes color as it dries, from shining in the sun, it gradually acquires a matte shade.

The head of the tortoise is pointed and large, and the skin on it and the paws are dark, dotted with spots. Reptiles weigh about one and a half kilograms, and are about 35 cm in size. Moreover, the largest individuals live in Russia.

European marsh turtles are divided into 13 subspecies with different habitats. Individuals differ in their appearance, size, color and some other parameters. 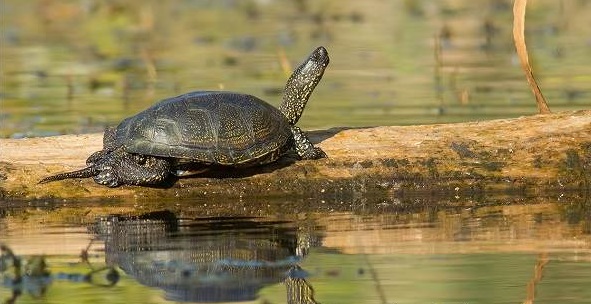 On the territory of Russia, where five subspecies of such reptiles are common, mostly black turtles are found, and in the hot sun of Sicily there are individuals with a greenish-yellow shell.

The genus of the described reptiles includes another species — the American marsh turtle, which has a carapax 25-27 cm long. The main background of the shell is dark olive, and on it are visible small bright spots.

Representatives of the fauna of this species have significant similarities with European marsh turtles in terms of appearance and behavior. For a long time, these two species of animals belonged to the same type of scientists, but a deeper study of the genetics and structure of the internal skeleton led to the identification of significant differences in these reptiles, which has now led to consider them as separate species of marsh turtles. 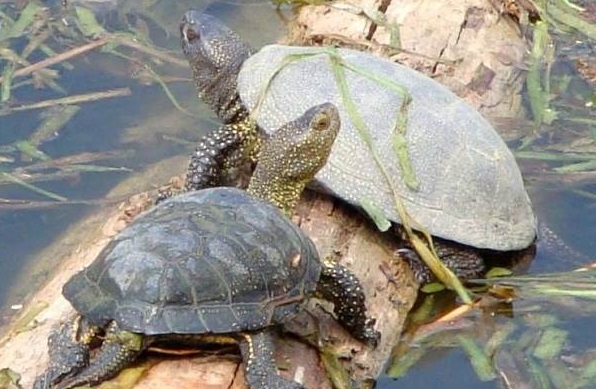 Care and maintenance of marsh turtles at home

These reptiles are often kept as pets in their own homes. You can easily buy them or catch them yourself in their habitats, for which the warm summer months are very suitable.

Domestic marsh turtles are usually smaller in size for individuals living in the wild. Their unpretentiousness allows anyone, even the most inexperienced owners, to support them and even have offspring from their pets.

Care and maintenance of marsh turtles does not involve anything complicated. However, the exact observance of certain conditions of care is vital for such pets. And the desire to take this creature for the sake of entertainment in your home can lead to the most serious consequences for these harmless creatures.

The marsh turtle at home is not able to live fully without sunlight. That is why adult healthy individuals in warm summer weather may well be let out for a walk in the yard of their own summer cottage, especially if there is a small artificial pond there. 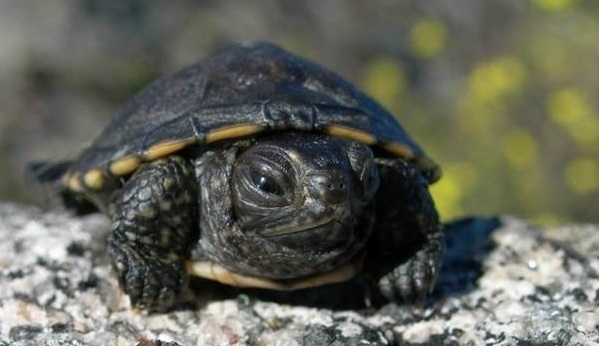 In the photo the young marsh turtle

Such reptiles can be kept in pairs, but caring for a marsh turtle presupposes the presence of an aquarium with a volume of at least one hundred liters, as well as a place for heating, illuminated by an ultraviolet lamp that heats the environment to 30 ° C and provides animals with a twelve hour day.

While living at home, the marsh turtles do not hibernate, and the owners of animals should know this and not worry about this. The disadvantages of the content of the marsh turtle is its immense aggressiveness. Reptiles are pugnacious to such an extent that they are capable of hurting each other and even biting off tails.

They are not friendlier to other pets, not tolerating rivals in the house, especially in those cases when it comes to the struggle for food. They are capable of treachery and can be, with carelessness, dangerous for young children. However, turtles are smart enough and give thanks to those who feed them. 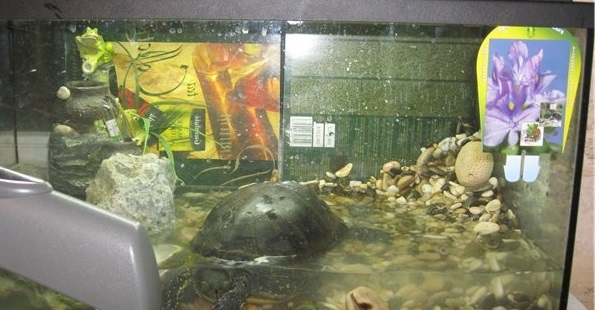 On the photo is a marsh turtle in a home aquarium.

During feeding, the turtles are very muddy, considering this, it is best to drop them into a separate container while eating. In addition, these reptiles are extremely voracious and prone to overeating, so keep in mind that adults need to be fed only two days later on the third, but young turtles need to be eaten every day.

What does a swamp turtle eat? In nature, they feed on snails, mice, crickets, worms and frogs, centipedes and crustaceans, as well as insects, larvae and algae, which can be found in the aquatic environment.

Turtles are sufficiently warlike predators, capable of attacking even snakes, also catch, by eating, small lizards and chicks of waterfowl. What feed marsh turtles, if they are pets? It is possible to give them chicken and beef heart and liver, pamper a little prawns.

In an aquarium, turtles usually also produce live fish of small sizes, for example, guppies. Feeding in the form of vitamins and calcium are simply necessary for such pets. In this sense, artificial food containing everything you need is very convenient. 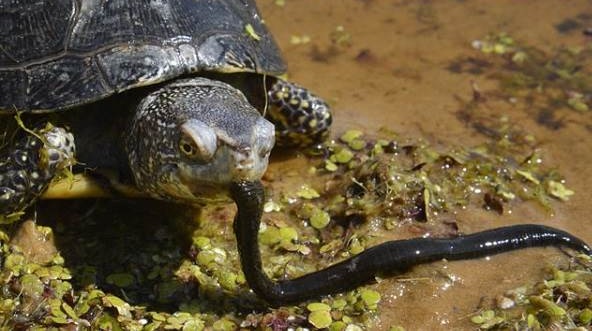 Reproduction and life expectancy of a marsh turtle

Barely awakening from hibernation, marsh turtles violate the process of reproduction, and at the end of the mating games, in the holes dug on land and not far from the water, they lay eggs in the amount of 12 to 20 pieces. They carefully bury their clutches. Small black turtles weighing no more than 20 grams appear only after two or even three and a half months, so it happens closer to the fall.

Most often, the young remain wintering, burrowing deeper into the ground, while adults usually spend the cold at the bottom of water bodies. The young feed on the yolk sac, which is on their abdomen. Laying of marsh turtles can ruin raccoon dogs and otters.

The life span of such reptiles remains largely unknown to scientists, and so far there is no consensus on this. But, like all representatives of the tortoise genus, they are long-lived. Experts usually call the figure from 30-50 years, but some biologists believe that marsh turtles, in some cases, can live to 100 years.