Mekong bobtail is an interesting breed of cats, bred in Southeast Asia. It belongs to the most ancient breeds of cats, therefore there are a lot of various mythical stories and fabulous beautiful legends about it. 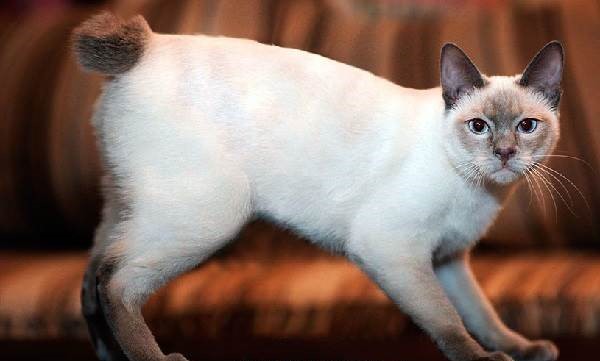 The ancestors of these cats were introduced to the European continent in 1884. Until that time, they lived in the Siamese capital with the wonderful name City of Angels.

The people of the Americas met this strange animal in 1890. In Russia, the Meckong bobtail breed first appeared in the 20th century. These were one of the most beloved pets in the royal court.

After some time, the popularity of this breed declined slightly. Many did not like the tail of cats, which is their distinguishing feature.

He is all in knots and kinks. If earlier it was considered a positive distinctive feature of an animal, then later it was a marriage that prevented them from taking part in exhibitions and contests. But Russian breeders still wanted to preserve this breed, despite the fact that it was unrecognized by many breeders.

Their works were not in vain. The breed was not only preserved, but also bred at its best. The year 1994 is notable for the unanimous adoption of the standard for the Thai bobtail, which was later corrected slightly.

And in 2003, 30 individuals appeared on public display, significantly different from the Thai bobtail. They got their name in 2004. And so this beautiful and beloved cat Mekong bobtail appeared.

Description and features of Mekong bobtail

These cats have a medium rectangular body, moderately stretched, with medium paws and a short tail. The head of the animal is flat, resembling the head of a lizard. The nose of the animal is decorated with a well-marked Roman aquiline. The cat’s chin is strong, the ears are large, the eyes are oval, blue.

In the description of a Mekong bobtail, its tail and color are important. As for the tail, many simply do not believe that it is not cropped on purpose. But these cats are really born with such an unusual tail. 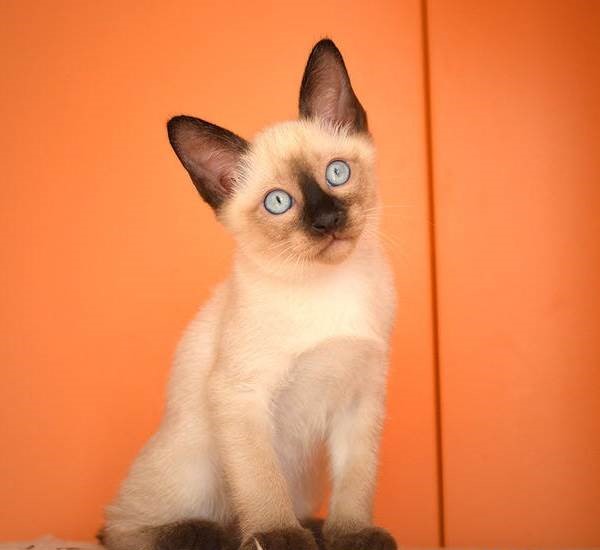 Animal hair resembles the hair of Siamese kittens. Mekong bobtail in the photo and in real life looks amazing. It is simply impossible not to fall in love with this sweet face.

These cats have excellent intelligence and are essentially small furry little men. They understand everything perfectly and make it understand with all their behavior. When they receive a portion of love, they give it much more.

These cats are more attached to people than to housing. Wherever a man goes, his beloved pet always follows him. Loyal to friends among pets is difficult to find. These cats are very neat and tidy.

And in their bottomless blue eyes it seems you can read absolutely everything. Cats have such an expressive look that you can only look at him to read her thoughts. In rare cases they can look away. Usually they look closely and for a long time, as if something is being said now.

Another individual feature of cats of this breed are their claws on the hind limbs. They never hide at all. Therefore, when an animal walks on the floor, a peculiar sound appears.

In this case, you can not apply the comparison — walks quietly, like a cat. This feature is more characteristic of the dog. There are still some traits of these animals in the cat.

They are excellent guards and can even growl at a stranger who has entered the territory under a bobtail. They are the very first to welcome guests, sniff them and decide whether to let them go or not. 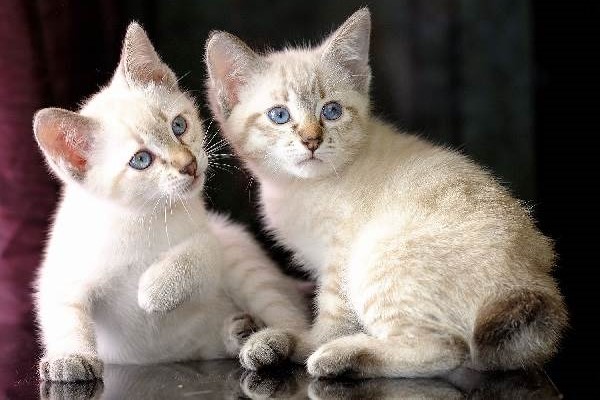 Breeders of this breed say that it is perfect for people who do not have enough communication. The cat gladly maintains a conversation with her master with the appropriate intonation.

This is not like meowing. The sound is quite peculiar and characteristic only of this breed. Cats need a person to necessarily have a sincere conversation with them.

Yes, and they do not make people wait for answers from themselves. After the question he asked, the host immediately receives an extensive response with comments to it. Cats love order. They can walk and grumble with displeasure, showing their discontent to the owner if the apartment is not cleaned.

People who are not accustomed to order can get yourself a female Mekong bobtail. She would teach them everything. She can stand for a long time beside the unwashed judge and meow, until her master understands and will wash her. These cats have an amazing talent to relieve people of stress. They are characterized by mobility and sociability.

These are very loyal animals, they are easy to train. Their behavior is more like the behavior of dogs. Besides the fact that they tag along with their master, like a faithful dog, they can be taught to bring slippers or a ball, a toy as a dog. No problem related to the fact that they take a walk on a leash.

These gentle pets are very fond of increased attention to themselves. At mekongov the feeling of curiosity is strongly developed. Hunter instinct in their blood. They are constantly observing everything that moves. They love to catch flies, grasshoppers and butterflies.

This game brings cats pleasure. If there are mice, rats or lizards on the site with the arrival of this pet, they simply disappear soon. This applies to birds and fish. Therefore, it is better not to risk it and not to start in a house where there is a Mekong bobtail of parrots or an aquarium. 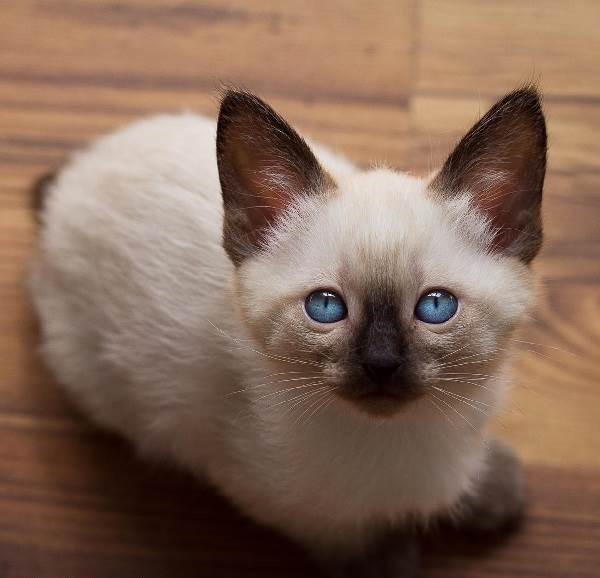 In this breed of cats are clearly expressed all the signs of matriarchy. Cats worship their ladies of the heart, sing serenades, care for them in all ways and do not mark corners.

At the end of the mating, when the cat is taken away, they call it for a long time and show how they yearn for it with all their behavior. A pregnant cat resembles a pregnant woman.

She becomes capricious and gives you care. After the birth of the little ones, the capricious turns into a selfless and real mother, who does not step away from her cubs. They lick them carefully many times a day, teach them to the elementary rules of hygiene and to the pot.

These animals have certain standards.

— The pads are strong, of medium length, marked by roundness.

-The tail is short; It shows solid fractures and nodules.

— At the base it is normal, curled to the end. The ideal tail does not exceed a quarter of the body in length.

-The heads are oval, wedge-shaped. She is flat. The muzzle of the cat is oval, with a strong chin.

On the nose striking Roman crook.

— Eye has a noticeable raskosos. They are wide open, rounded and elongated at the same time. Their color is strictly blue in different variations.

-Ears are not striking, though not small. They are set wide.

-Cats have short hair with almost no existing undercoat, silky and pleasant to the touch. There may be several colors, with primary colors milky cream, white peach, silver and white cream. Paws, ears and tail of black-brown, pink-blue and chocolate animals with a slight tint on the forehead in the form of the letter M. 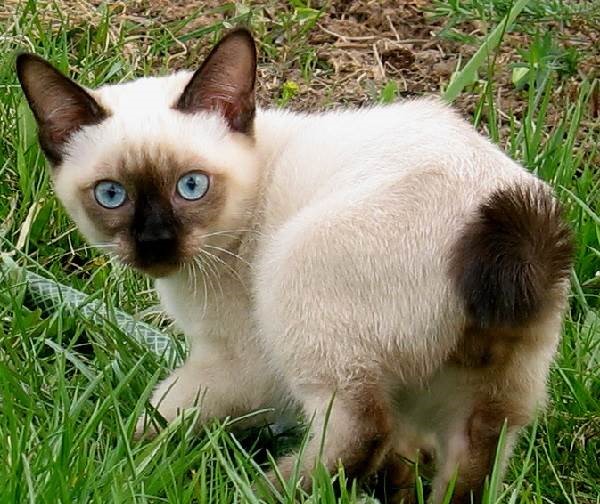 For cats of this breed need a special diet. It is desirable that they always have access to the dish. Bobtails, because of their internal structure, prefer fractional feeding. They never overeat, do not even worry about it.

These animals give their preference to meat. It should be 2/3 of their diet. Most of all they love raw meat. It is desirable to hold it in the freezer for at least a day. 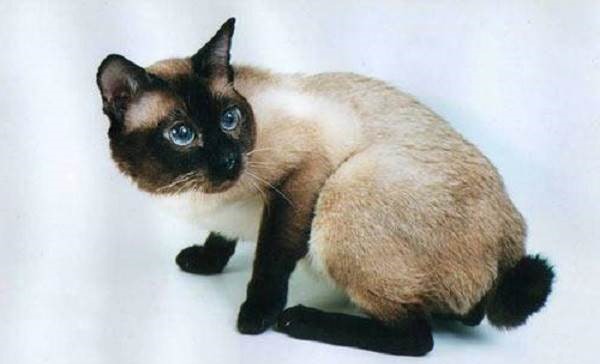 Beef, turkey, rabbit and veal are perfect for them. For some reason they don’t like chicken much. But the pork from their diet is better to completely eliminate, it causes prolonged diarrhea in cats.

In general, all fatty foods are contraindicated for cats of this breed, they should generally avoid fried meat. Digestive problems start after cheap feed.

In the diet of the Mekong bobtail, there must necessarily be boiled vegetables, red fish, cottage cheese, in a word, everything that contains a lot of calcium. This is very useful for cats.

It is important to remember that they are extremely undesirable for milk after 4 months from birth, due to poor cat assimilation. Sometimes you can use the help of baby food, in which there are beautiful low-fat yogurt. In the same series there are meat products, it always falls in love with these pets.

Oil added to food for a Mekong bobtail is extremely contraindicated. But quail eggs can give them 4 times a week. But only strictly raw. Boiled quail eggs are generally not absorbed by their body.

Foods containing a large amount of carbohydrate cats are better not to eat. They are happy to eat germinated oats and wheat, which can be purchased at the pet store or grown at home.

To care for the short hair of the animal does not require a lot of effort and hassle. It is enough to bathe the cat regularly and comb it so that its wool shimmers and glistens. You should also regularly brush the teeth of the animal.

This procedure prevents the occurrence of infections in the mouth. Every day, it is desirable to clean the pet’s ears. They often have ear plugs. 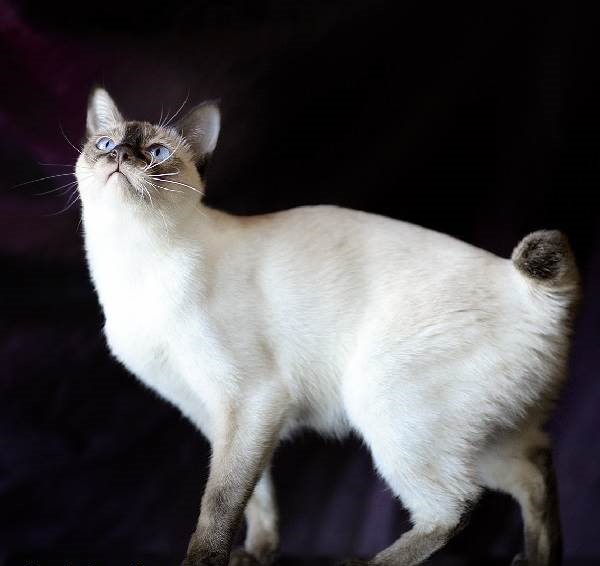 Pet clipping is welcome, if there is no scraper in the house. This should be done carefully and with utmost care. Trays for food and the pot of the animal should always be in perfect condition. Traction to the purity of pets at the gene level.

A visit to the vet with a Mekong bobtail is mandatory, respectively, and vaccination too. This will help the pet live a long and happy life, the average duration of which is about 23 years.

Mekong bobtail kittens without problems can be purchased in Russia for the reason that this country is engaged in their breeding. There are many nurseries that can offer cats of this breed of different colors. Buy Mekong bobtail can be in any of these nurseries. This takes into account the presence of a pedigree of a kitten, its class, gender.

People who have these cats speak about them in the most forest way. Especially all are attracted to cats, which in the period of maturation become the most real housewives. 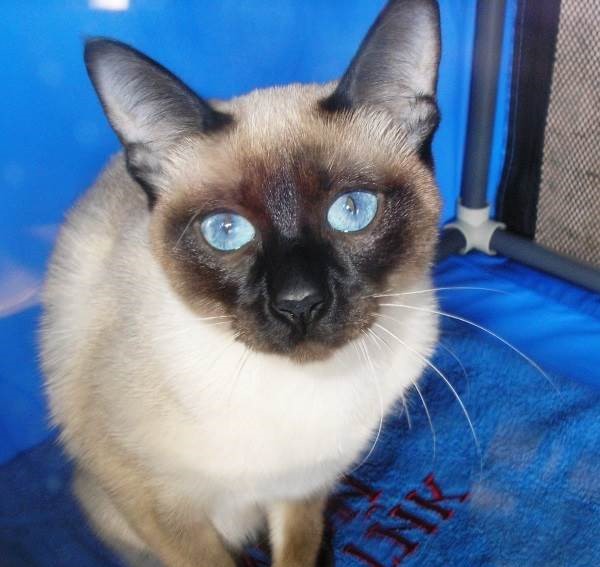 They try to clean things up after the babies, Older children are escorted to school, to the point that they sniff their briefcase. The main thing for them is the presence in the portfolio of a sandwich for the child. For other people, such a cat has always tried to put the toys scattered by the child in the box, even the seemingly very heavy ones.

Males of mekongov are calmer and more balanced individuals. They are not annoyed by children’s fun with them. A child can swaddle a kitten, carry it in a stroller. There can be no reaction from him.

Amazing love for children and peace. Those who bought this pet have never and no one regretted it. The average price of a Mekong bobtail is from $ 150.