Features and habitat of the moor frog

Frogs are very common creatures. These amphibians, or, as they are usually called, amphibians, are divorced in large numbers in the depths of marshes and in the armholes of rivers, caught in arable land. 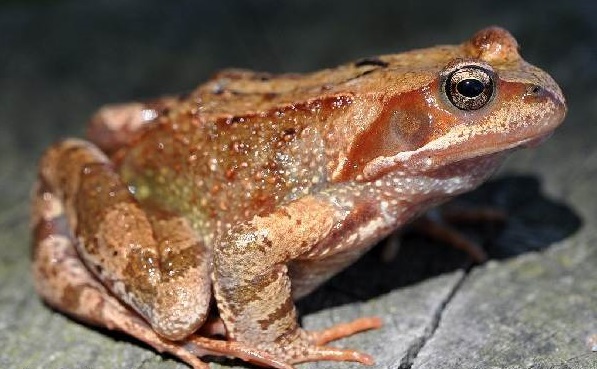 During the blessed warm months, such living creatures can often be observed on the banks of reservoirs with insignificant currents and in forests. They live and are found in nature almost everywhere.

But it is especially common, typical and well — known moor frog , which has found refuge in many regions of Europe. These amphibians make habitable wet and even dry areas of forest-steppe and wooded areas, many of them fall on glades and forest edges, grass-rich meadows and in bushes among the ravines.

Even the lawns of parks and squares of large cities can become the habitat of the moor frog . They are found in the Carpathians and Altai, spread from the southern regions of Yugoslavia to the northern regions of Scandinavia, and further east through the vast territory of Russia up to the mountain range of the Urals . 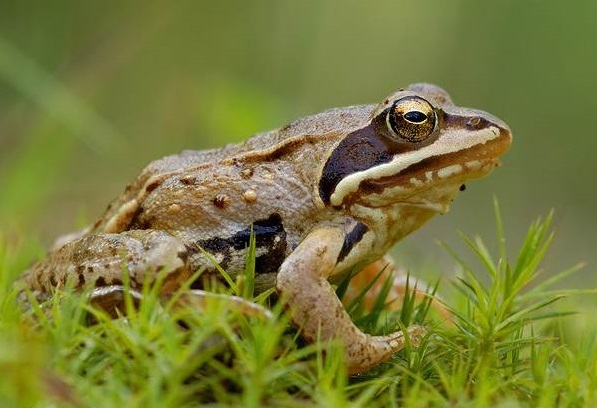 These creatures have an average size, usually not exceeding 7 cm, and their body is approximately twice as long as the legs. As you can see on the photo of a moor frog , the color perfectly masks it against the background of the summer landscape and green grass, which is greatly facilitated and, going from the eyes almost to the shoulder, gradually narrowing, a large temporal spot that makes the frog even more imperceptible to the living creatures that creates undoubted advantages during the hunting of such amphibians.

The main background of the back of these creatures is usually brown, to which can be added olive, pink and yellowish shades, marked by shapeless dark, different in size, spots, not only on the back, but also on the sides. Sometimes a longitudinal light band is added to the overall color of the top. The skin on the hips and sides can be smooth. 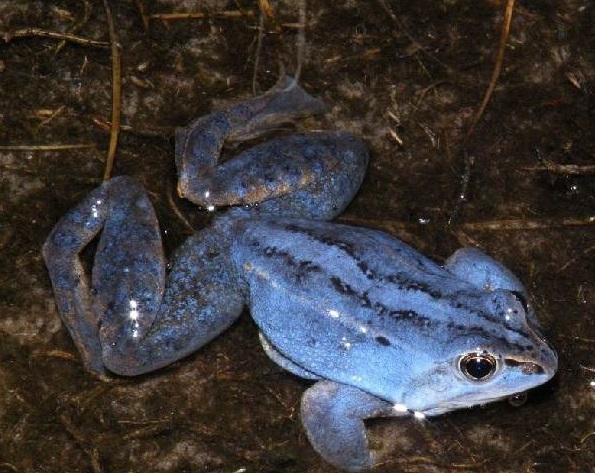 Conducting a description of a moor frog , it is necessary to mention that males can be recognized by the light blue body tint they have during the mating season, unlike brown or reddish females, as well as by rough calluses on the first finger of the forelimb.

There are, moreover, enough signs giving the opportunity to distinguish between moor and grass frogs . Among them is the calcaneal tubercle, which in the first amphibians is significantly elongated.

The second has almost a round shape. In addition, grass frogs have a speckled belly. In the presence and some other signs, but the main characteristic feature of the appearance of the described amphibian is a sharp muzzle, which was the reason for the name.

Species systematics of the moorland frog is not completely clear . Usually these creatures belong to the group of brown frogs , considering them to be one of the numerous representatives of the species of tailless amphibians of the domestic fauna.

Character and lifestyle of moor frog

Amphibians are cold-blooded representatives of the fauna of the planet. Therefore, making up a brief description of the frogs , it is impossible not to notice that the activity of such creatures is strongly dependent on the degree of heat of the surrounding air by the sun.

In warm weather, they are full of life, but when the temperature drops a little, they are already becoming much less active and mobile. They are also capable of destroying dryness, because amphibians breathe not only light but also through the skin, which requires a high level of humidity. 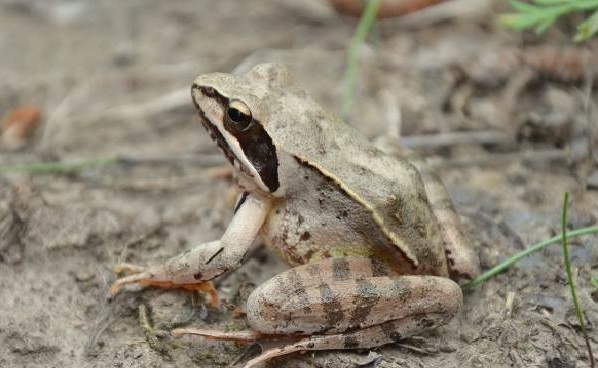 That is why such creatures are rarely removed from water bodies at a distance greater than a few tens of meters. And being on land, they seek shelter from the burning rays of the sun among the fallen leaves, under the branches of trees and in the thick grass.

On a summer day, they usually rest at the bottom of water bodies. When autumn comes, the frogs go to look for wintering places, which they spend in rotting stumps, deposits of leaves and branches, in abandoned burrows of small animals and holes, sometimes in basements.

Wildlife lovers often keep moor frogs in an apartment in a small terrarium that is shallow, but rather large in size, with an artificial pond and suitable vegetation.

The volume of frogs’ home dwellings is usually about 40 liters, and the top of the terrarium is covered with a grid that is dense enough, but through which air passes. Additional heating and lighting amphibians are not required.

Nutrition frogs depends on the time of year and, of course, from the area in which they spend their lives. They are predators, and their sticky long tongue helps them to catch suitable prey in the blink of an eye, and to get food and hunt (usually it happens in the evening).

The main food for these living creatures are insects. They can be caterpillars, mosquitoes, which frogs catch right on the fly, spiders, ants and beetles, as well as various invertebrates: earthworms and mollusks. These frogs are able to feast on their own relatives. 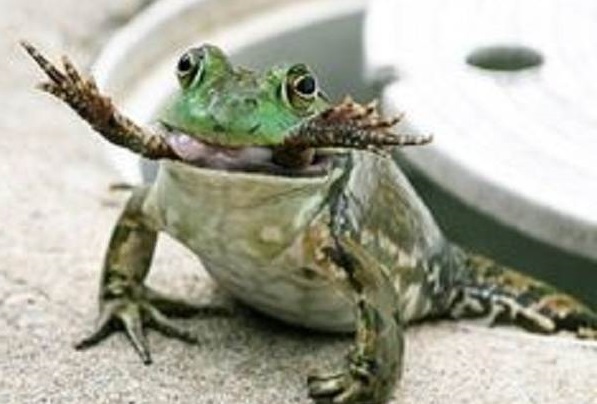 Each individual has its own small (about three hundred square meters) feed area, where they get their food, hunt, and they protect it from unwanted aliens. If, for some reason, there is not enough food in this area, the frogs at a low speed gradually begin to migrate in search of better places.

The life of these amphibians begins in the water. It is in this environment, most often in shallow bodies of water, on sand banks, overgrown with grass, in ditches and puddles, caviar is deposited, and this is how reproduction of the moor frog is carried out . It happens in early spring, as soon as the snow melts, and the water gets warm a little. The marriage period ends and spawning is already in May. 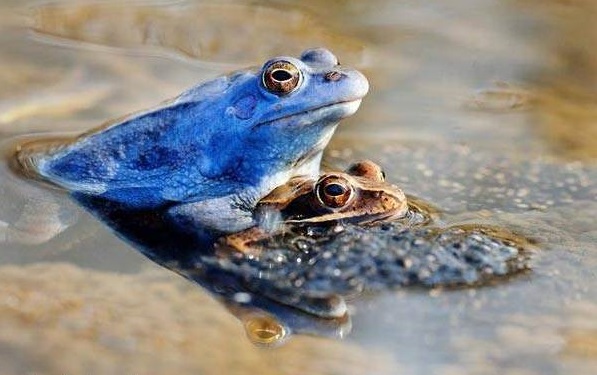 The number of eggs of one female individual, with a diameter of more than half a centimeter, amounts to hundreds or even thousands of pieces. After the roe is laid, the participation of the frog mum in the process of reproduction ends, and the male protects the offspring.

But even his vigilance is not able to protect future frogs from tragic troubles. Only a small part of the eggs survives and reaches maturity of the adult individual. It often happens that the offspring are ruined, the sun’s rays begin to burn too early, the sun’s rays contribute to the too rapid drying up of water bodies.

The development time of the eggs depends on the surrounding conditions and the vagaries of the weather and can last from 5 days to three weeks, after which the larvae hatch from which tadpoles appear after a month or three. 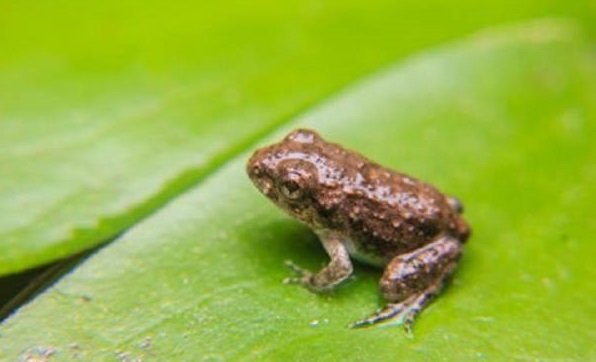 Possessing a dark color, kids, unlike parents, have in truth, compared to their size, a huge tail, twice the size of their bodies. And only after another month they have normal limbs, they begin to breathe light, and the tail finally disappears.

These creatures live for about 12 years, if they do not become victims, predators who have flattered them. Frogs tend to hunt foxes, badgers, ferrets and other animals , from birds — crows , seagulls , storks . Snakes are also the enemies of these amphibians .