Features and habitat of mountain sheep

Mountain sheep is a group of artiodactyls — members of the family of bovids, which are akin to, by some characteristics, similar to each other, domestic sheep, musk ox and mountain goats. 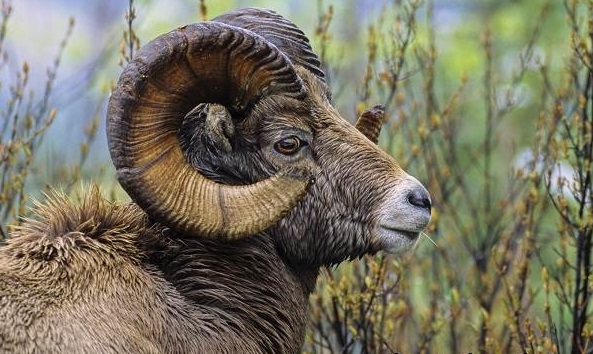 It is possible to distinguish from the last mountain sheep mainly by imposing horns, having a rounded shape in cross section, as well as by more massive, dense build, short limbs and the absence of a beard.

The wild mountain sheep is more slender than the domestic sheep, and its horns are higher. Blue and maned rams are also akin to these animals, being an intermediate form between ordinary rams and mountain goats. Mountain sheep are characterized by medium and large size. And basically their largest species, which scientists number about seven, are systematized and differ among themselves. 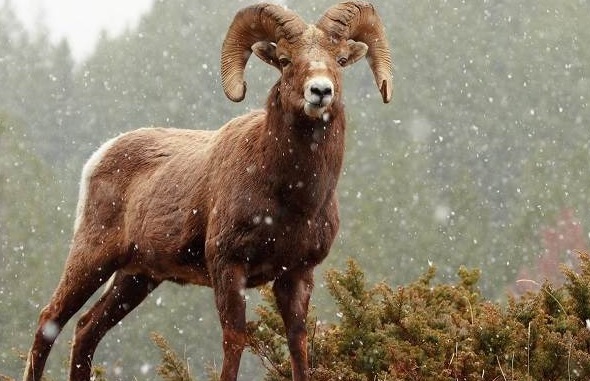 As you can see in the photo of a mountain sheep, unconditional pride and decoration of such animals are their horns, twisted in an original way into a spiral, transversely striated and directed in different directions.

The owner of the largest and heaviest (weighing up to 35 kg) horns is the Altai mountain sheep, it is also the largest representative of such animals (in the average individuals have a mass of about 180 kg). 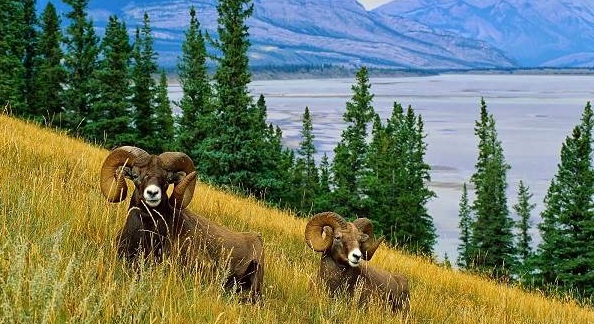 However, this is a very rare species, the population of which is, according to estimates, only about 700 individuals. In view of this state of affairs, in Russia these mountain dwellers are listed in the Red Book.

Coloring of animals, as a rule, is patronizing, these are greyish-red or brown shades, but part of the legs, the back area and the belly, in most cases, are painted white. However, exceptions are enough. For example, thin-legged sheep differ monochromatic light gray or white colors, and the maned look is distinguished by yellowish-red shades. 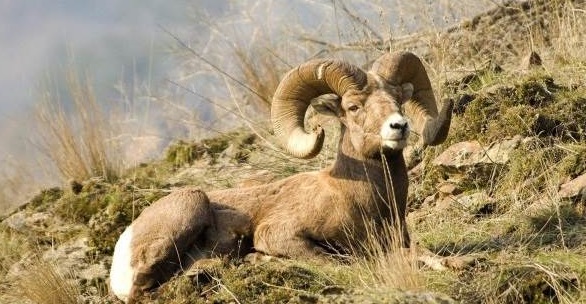 Mountain sheep successfully settle in almost all the mountainous areas of the Northern Hemisphere, are particularly well represented in Asia, but are found in numerous mountains in Europe, as well as in North Africa and America, preferring to inhabit fairly low altitudes, unlike mountain goats. One of the species of these animals: Tolstonog sheep, is also found in deserts located at the foot of the mountains.

The nature and lifestyle of the mountain sheep

Wild sheep usually do not leave the inhabited places, but depending on the season they make small seasonal movements, in summer they rise higher to the tops of the steep mountains and fall into herds of several dozen heads.

In winter, they descend to the foot of the mountains, forming large clusters, numbering up to 1000 heads. Individuals of the male sex and females with their offspring usually keep apart and form separate herds. It often happens that large, strong, confident males are kept alone. 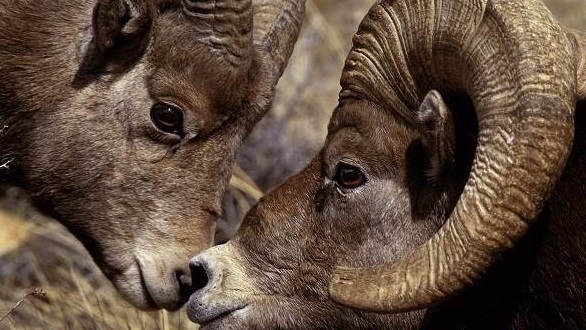 When communicating, these animals do not show aggression to each other. To warn the congeners about the danger, the quick-witted and cautious mountain sheep are able to give audible signals. The bleating of animals according to their tonality is crude and low.

When confronted with the enemy, these mountain creatures are able to display a practical mind, find a way out of the situation and in time escape from danger. On sheer surfaces, they move poorly, but are able to perfectly jump from cliff to cliff. Mountain sheep is able to take a height exceeding its height, and they jump 3-5 meters long.

Predatory birds such as golden eagles and eagles, as well as large animals such as pumas, snow leopards and wolves, and in certain parts of the world coyotes, cheetahs, and leopards can pose a threat to these mountain animals. 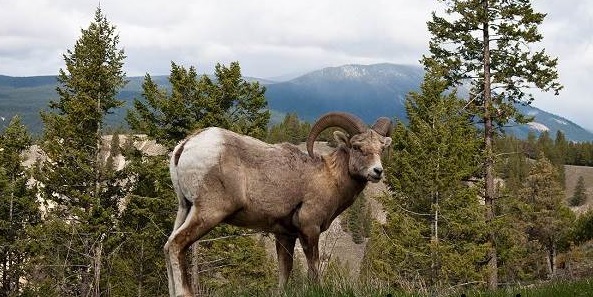 Mountain sheep is not so easy to defeat, so many predators try to simply knock animals down, forcing them to fall into the abyss, and then they catch up with the wounded or dead and eat.

From time immemorial, the danger to mountain sheep is also represented by a man who leads actinia to animals for the extraction of fat and meat, making magnificent trophies and souvenirs from their beautiful horns and heads.

As a result of such actions, as well as the taming of certain types of sheep and the spread of cattle breeding, the population of mountain sheep often suffered significant damage.

The population of mountain sheep and human civilization have come together from time immemorial. These animals, spread all over the world, often became heroes of ancient cults.

And ram horns among the peoples of Asia were considered a magical artifact. Domesticated animals are perfectly acclimatized and breed without problems, and also interbreed with sheep, as a result of which hybrids appear.

Wild sheep are herbivorous, and therefore they use various, mainly herbal, vegetation of the highlands in which they exist, but animals prefer cereals to all other types of food. 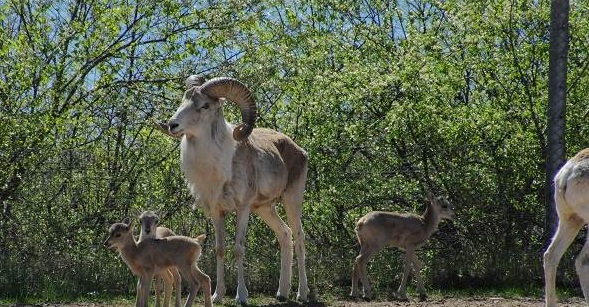 However, they are very unpretentious, so they can be content with coarse types of food. Mountain sheep are happy to be able to eat the branches of trees, for example, oak or maple, as well as a wide variety of shrubs. Finding deposits of solonets, they greedily lick salt from them, satisfying the body’s need for minerals.

These animals also need abundant sources of clean water, but rams living in desert areas often have an acute shortage of such needs. For winter, the animal organism is prepared in advance, accumulating fat reserves.

The male of the mountain ram is easily distinguished in appearance from the female. The size of the body, they are larger in one and a half, sometimes twice. Moreover, the horns of females are usually weakly bent and shorter in size. Their length is not more than 35 cm, while the male individuals of mountain rams, horns may have a meter size. 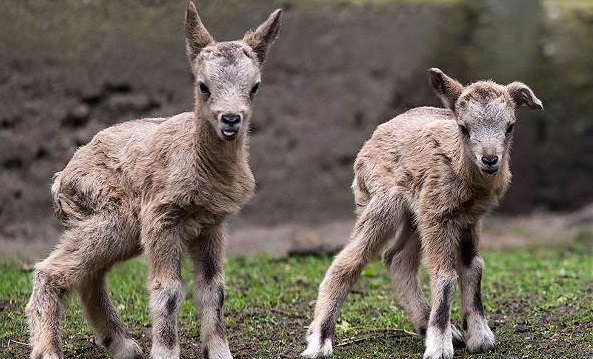 In the photo are young mountain sheep

The mating season in animals begins in late autumn, usually in November. For this time, the ritual fights of males competing for females are characteristic. In this case, two opposing individuals, standing against each other, scatter and collide with their foreheads.

Their powerful frontal bones are quite capable of withstanding the power of such a huge blow. While caring for their chosen ones, the sheep excite their feelings, sticking their tongues out and making peculiar movements with them.

After mating, individuals of the female bear their cubs, which, as a rule, are one or two, on average, about 160 days. Lambs are usually born in the spring, and at the time of the birth, mothers leave their flocks, returning only after a week with cubs. 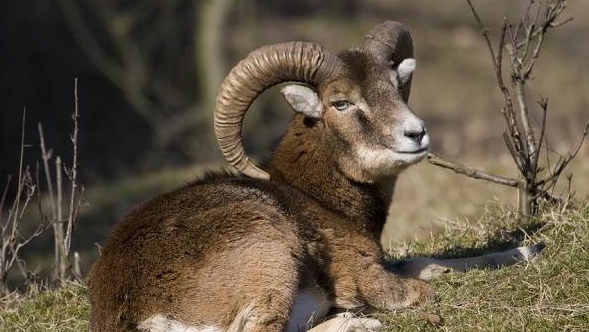 After the end of the period of dairy nutrition, by the fall, young lambs are already able to independently satisfy their needs for food and clean water. Lambs are active and mobile, they jump and play very well, but are vulnerable and need constant attention and protection. The lifespan of mountain sheep depends on the type of animals and the conditions in which they exist, averaging about 10-12 years.