Myocastor coypus is an animal of rather large size. They have been grown for many years in countries such as Russia, Kazakhstan, Ukraine, and the Caucasus. 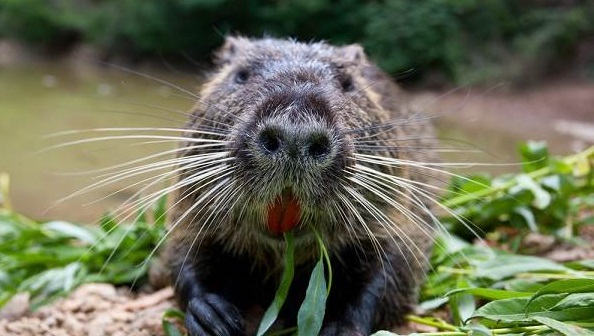 A distinctive feature of nutria is their orange teeth. If you compare its fur with the fur of a rabbit or even a fox , then the fur of the nutria is much better.

Nutria meat is also useful . It is a diet food and, moreover, it is very tasty. Of course, it’s hard to believe if you look at the photo of nutria.

It is a rat-like animal with a body length of about 60 cm and a long tail that is covered with scales. If you want to see what Myocastor coypus looks like , the photos are presented in this article. South America is the birthplace of nutria. There they can be found mainly near reservoirs, as well as near swamps.

Initially, they began to be bred in the USA, and from there they “moved” to Europe and afterwards to us. A surprising fact: in Africa, this animal has not caught on. 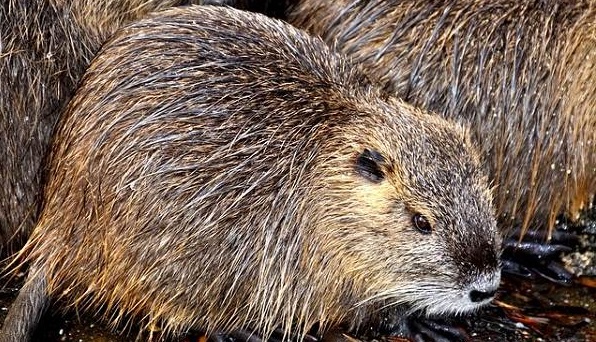 Nutria have very good fur, due to which the animal will not freeze even at very low temperatures. But in those places of the planet where the climate is very cold, nutria still do not live. And it is easy to explain.

Such animals simply are not adapted to create a home and stock up on food for the winter. In the cold period of the year, coypu cannot get food under the ice, because it simply will not be able to navigate in such conditions.

This is another reason why nutria cannot live in places where it is very cold. In hot climates, nutria feel much more comfortable. If the street is more than thirty degrees Celsius, nutria hiding in the shade or dig a hole in which they wait out the heat. These animals can dig no worse than moles . Quite often they build nests in reeds. 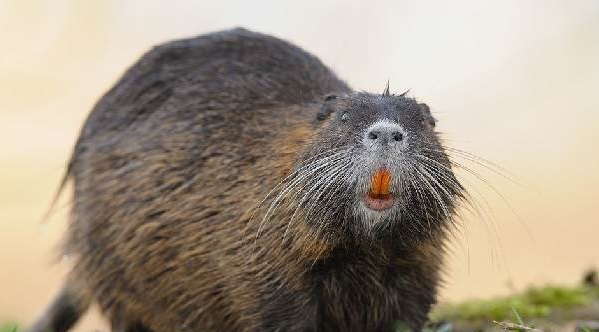 In Europe, nutria is called the pine forest rat. This is due to their place of residence. Most often, nutria settle in reservoirs where the water is standing or low-flowing. The ideal place for nutria is reed lakes.

If you want to buy nutria , you can search for ads on their sale on the Internet. If you want to breed nutria, the price of which may be different, then we advise you to read this article. These tips will help you achieve success in breeding these animals.

Cultivation and maintenance of nutria

Nutrias can be diluted year-round or seasonal. In the first case, the animals must mate continuously. To achieve this, it is necessary to constantly monitor the behavior of the females, and as soon as she begins the hunting period, she will need to have time to plant her to the male. In the case of breeding nutria throughout the year, quite often resort to re-whelping female nutria. 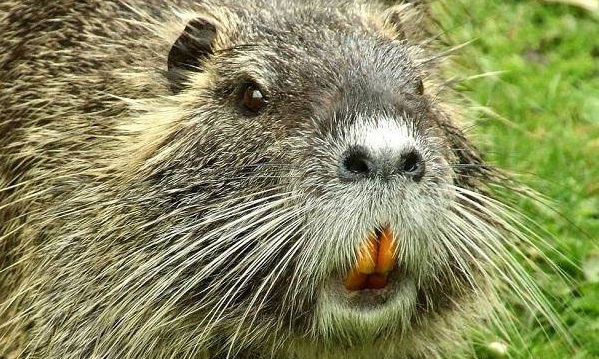 As a result, the offspring can double. However, this breeding method has its drawbacks. Nutria must be monitored closely. With the year-round breeding method, all females often cannot meet the requirements: some of them may be pregnant, others have a lactation period (feeding offspring), while still others have not had time to fully mature: their hair is not yet developed.

It is necessary to take into account that full-haired and large skins of nutria can only be obtained at slaughter in the autumn-winter period. A fur coat from nutria in this case will be of high quality.

From early October until the end of February is the perfect time for slaughter. It is worth noting that nutria must reach a certain age before that. She must be at least 9-10 months. 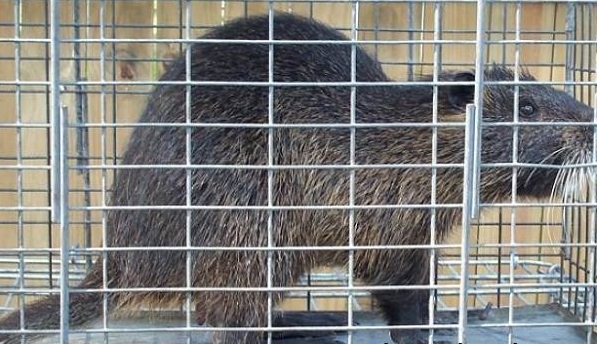 Given this, young individuals that are born in the second half of the year must be maintained until the end of next year. Thus, the cost of feed increases. If you breed nutria seasonally, many of the shortcomings encountered during year-round breeding can be avoided.

Under natural conditions, nutria feeds on plants that grow near water bodies, as well as branches and roots. When keeping nutria at home, they are fed mainly with mixed fodder, grain, as well as herbs, pumpkin and other products. 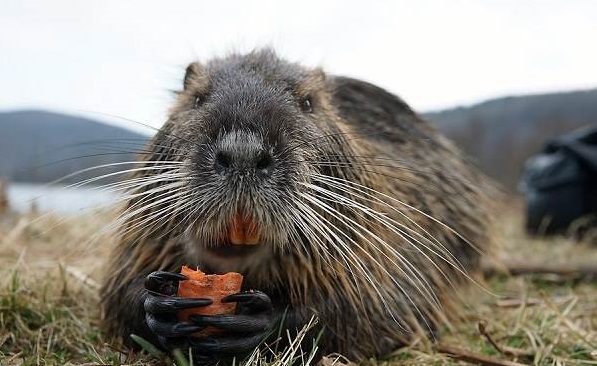 Nutria also eat well Jerusalem artichoke, carrot, parsnip, corn tops. You can feed them and natural food — reed, branches and more. It is necessary to take into account that nutria are rodents, therefore they need to be given branches thicker so that they can sharpen the incisors.

The favorite feed for nutria are the ears of young corn. They can eat them whole. However, the most useful product for them is ripe corn cobs, the grains of which are already harder.

Another favorite delicacy of nutria is corn grain. It should be noted that the amount of such food should be limited to young females, as well as females, which are intended for mating them to pregnant individuals.

This is explained by the fact that when eating a large amount of corn kernel, the nutria can fatten and eventually give birth to dead puppies. You can feed corn grain nutria that will go to the bottom. But here it is necessary to ensure that all grains are fully eaten before the next feeding. 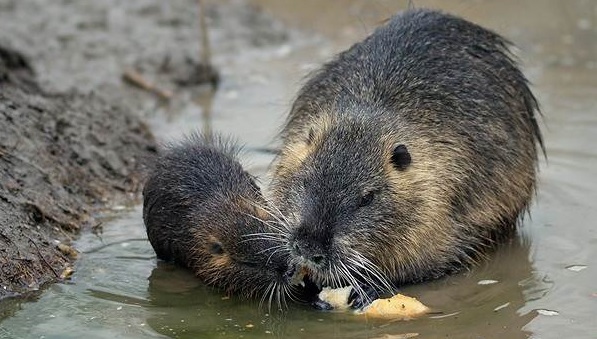 It is also very useful to feed the nutria with sugar beet. However, for females that feed their offspring, the amount of this product in the diet should be reduced to a minimum.

The fact is that sugar is capable of clogging the milk canals, and milk in sufficient quantities will not enter the offspring. This can lead not only to slowing down the development of the nutty, but even to their death.

In most cases, nutria get used to the same type of food. And if you make new products in their diet, they can respond to it. If, for example, you fed nutria with beets for quite a long time, and then suddenly switched to a pumpkin, then at first the animal will eat it with reluctance.

However, after some time he will eat it no worse than beets. However, you should not often change the roots for zucchini, pumpkins, etc. The harmful and even poisonous for the body nutria are foods such as green tops of potatoes and carrots, as well as potatoes themselves. The list of poisonous plants also include celandine, dope, spurge and others. 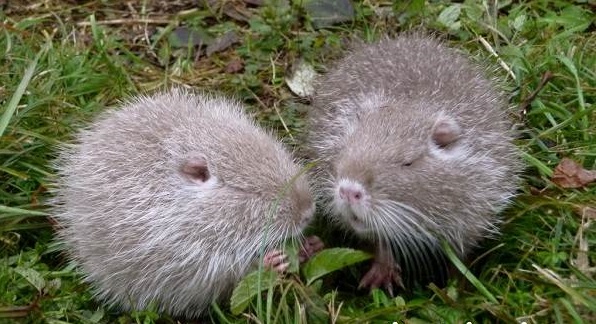 Nutrition should not be fed rotten food, like other animals. You can not give sour foods and fallen grass. Remember that the diet of nutria should not include fish and meat.

Reproduction and life expectancy of nutria

Nutria females are able to produce offspring a year up to two or three times. For one offspring, she can bring from 5 to 7 cubs. Born interior already very mature. A few months after birth, the young begin to live on their own and leave the mother.

Life expectancy of the nutria, living in the wild and nutria contained in natural conditions, differs markedly from each other. So, in the wild, the life span of nutria is about four to five years. Myocastor coypus homemade or nutria in a zoo with good care can live a lot more — twelve years.