The animal narwhal is a marine mammal that belongs to the family of narwhal. It belongs to the order of cetaceans. This is a very remarkable animal. Narwhals owe their fame to the presence of a long horn (tusk). It is 3 meters long and protrudes directly from the mouth.

Appearance and features of narwhal

The adult narwhal reaches about 4.5 meters in length, and the cub is 1.5 meters. At the same time, males weigh about 1.5 tons, and females — 900 kg. More than half the weight of the animal is fat deposits. Outwardly narwhals look like belugas.

A distinctive feature of narwhal is the presence of a tusk, which is often called the horn. Tusk weight is about 10 kg. The tusks themselves are very strong and can bend to the sides for a distance of 30 cm.

Until now, the tusk functions have not been studied for sure. Previously it was assumed that he needed narwhal to attack the victim, and also so that the animal could break through a crust of ice. But modern science has proved that this theory is unfounded. There are two more theories: 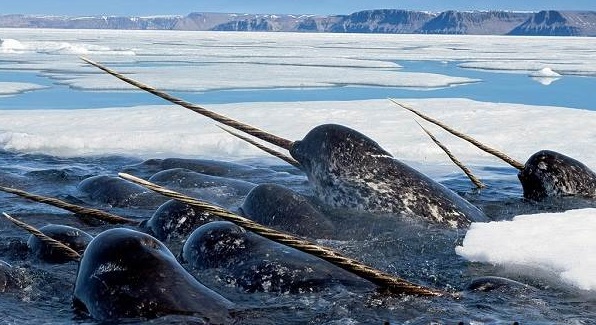 1) The tusk helps the males in attracting females during mating games, as narwhals love to rub tusks against each other. Although according to another theory, narwhals rub horns to clean them from growths and various mineral deposits. Also, tusks are needed by males during marital competitions.

2) A narwhal tusk is a very sensitive organ, there are many nerve endings on its surface, so the second theory is that an animal needs a tusk to determine water temperature, ambient pressure, and electromagnetic frequencies. He also warns relatives about the danger.

Narwhals are characterized by roundness of the head, small eyes, a large massive forehead, and a small mouth, located low. The shade of the body is somewhat lighter than the shade of the head. The belly is light. On the back and sides of the animal there are many spots of gray-brown color.

Narwhals have absolutely no teeth. Only on the upper jaw there are two primordia. In males, over time, the left tooth turns into a tusk. In the process of his growth, he pierces his upper lip.

The tusks curl clockwise and somewhat resemble a corkscrew. Scientists have not figured out why the tusk grows on the left side. This is still an incomprehensible mystery. In rare cases, the narwhal both teeth can transform into horns. Then he will be two-horned, as seen in the photo of the animal narwhal .

The right tooth of narwhals hides in the upper gum and has no effect on the life of the animal. However, science probably knows that if the narwhal sea unicorn breaks its horn, the wound in its place will be dragged out with bone tissue, and the new horn in that place will not grow.

Such animals continue to live a full life, not feeling any discomfort from the absence of a horn. Another feature of the sea ​​animal narwhal is the absence of the dorsal fin. It swims with the help of lateral fins and a powerful tail. 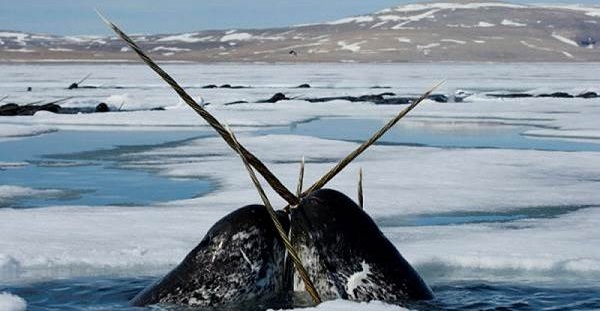 Narwhals are animals of the Arctic. It is the cold habitat that explains the presence of a large layer of subcutaneous fat in these animals. The favorite places of these peculiar mammals are the waters of the Arctic Ocean, the region of the Canadian Arctic Archipelago and Greenland, near the New Land and Franz Josef Land. In the cold season they can be found in the White and Bering Seas.

The nature and lifestyle of narwhal

Narwhals are the inhabitants of the ice watersheds. In autumn, arctic unicorns narwhals migrate to the south. They find openings in the ice that covers the water. Through these polynyas the whole herd of narwhals breathes. If the polynya is covered with ice, then the males break the ice with their head. In summer, animals move to the north in the opposite direction.

Narwhal feels great at a depth of 500 meters. At sea depth, narwhal can be without air for 25 minutes. Narwhals are herd animals. They form small flocks: 6-10 individuals.

They communicate with sounds like belugas. Killer whales and polar bears are enemies of arctic animals , polar sharks are dangerous for youngs .

Hunt at a depth of 1 kilometer. The functional teeth of narwhal are used by scientists to suck up and throw out a stream of water.

This makes it possible to shift the prey, such as shellfish or bottom fish . Narwhals have very flexible necks, which allows them to explore large areas and capture moving prey. 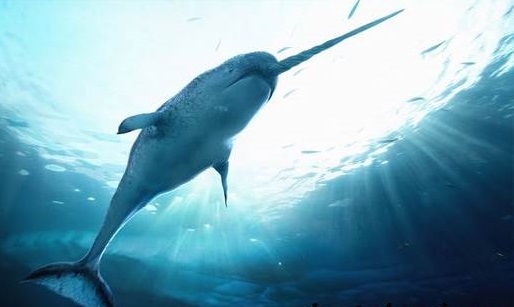 Reproduction and life expectancy of narwhal

Reproduction in these mammals is slow. They have puberty comes on reaching the age of five. Between births, the interval is 3 years.

The period for mating is spring. Pregnancy lasts 15.3 months. As a rule, females of sea unicorns give birth to one cub, very rarely two. Cubs are large in size, their length is about 1.5 meters.

But it is assumed that she, like the beluga whales, is approximately 20 months. Copulation occurs in the position of the abdomen to the abdomen. Young born tail forward. 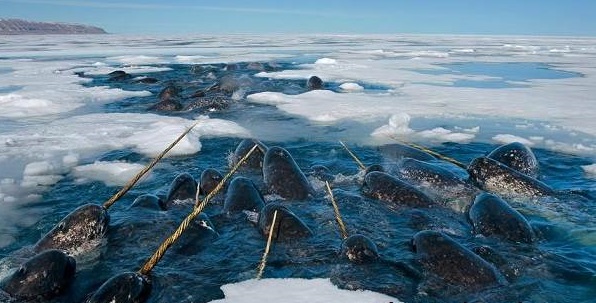 Narwhal is a freedom-loving animal. At liberty, he has a long life span, about 55 years. In captivity, they do not live. Narwhal begins to wither and die within a few weeks. The maximum life span of narwhal in captivity was 4 months. Narwhals never breed in captivity.

So narwhals are civilians of the Arctic waters, feeding on fish and mollusks. In the ecosystem they play their role, being owners for such parasitic animals as nematodes and whale lice. Since ancient times, these mammals have been the main food for the peoples of the Arctic. Now narwhals are listed in the Red Book and protected by law.