Nematodes , another name — roundworms , are a type of primordial cavity worms. Their diversity is very large. Currently, about a million species of this worm have been discovered.

They all distinguish between free-living and parasites. Typical for all nematodes is the structure . The body of the nematode itself looks like a spindle, narrowed towards the ends: anterior and posterior.

They were called round because a cross section results in a circle. Their body is shrouded in a dense cuticle, with longitudinal muscles located under it. This can be clearly seen in the photo of the nematode .

There is no circulatory and respiratory system. Breathing is performed throughout the body or anaerobically. The digestive system is simple and consists of the mouth and anus, between which there is a straight tube.

There is a “mouth” on the head, which is surrounded by lips. Through it, food happens: food is sucked in. Several species of free-living nematodes have developed eyes, which can be with different color pigments. The size of the worms body varies on average from 1 mm to 37 cm.

Nematodes demonstrate a striking example of biological progress. Today they live in all environments. Starting from the salty bottom of the ocean, as a result of evolution, they conquered freshwater bodies and soil, and now they can live and multiply in any multicellular organism.

The nature and lifestyle of nematodes

Like any parasite, the nematode worm adapts perfectly, has a simple life cycle, and develops very quickly. It can be called the «ideal» parasite.

Living in the body of the host, it is capable of causing various diseases, but not fatal ones. The nematode uses its food and body for life, and in order not to harm it additionally, it removes its eggs from the host ‘s body . Thus, finding intermediate, and settling on a large territory.

In order to survive, all nematode-class worms possess additional adaptations that he received as a result of evolution. Its dense shell protects from the action of digestive juices, females are very prolific, special organs for fastening. Some of the nematode species are successfully used for the extermination of «harmful» worms. 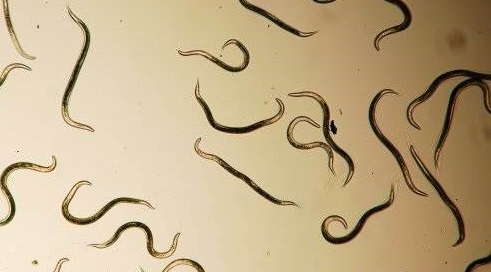 Conventionally, all nematodes are divided into two types : free-living and parasites. The former live in soil and water, while the latter live on plants and in animals, insects, and humans. Free-living nematodes account for most species of roundworms. All of them are small in size, giants reach only 3 cm. They can live in any liquid, even in vinegar.

At fairly low temperatures, even at the North Pole. Many nematodes that live in soils provide undoubted benefits and play a major role in the process of soil formation. These nematodes found their use in the aquarium . They are the perfect food for fry. They are grown specifically or they multiply themselves when overfeeding or in clusters of rotting debris.

Parasites cause irreparable harm to agriculture, livestock and man. Nematodes cause diseases that vary in severity . They can parasitize in any organs. Worms differ in more impressive sizes. For example, a sperm whale nematode may be 8 meters long.

Free-living nematodes eat small algae, bacteria, plant debris. Predators among them — a great rarity. With the help of the mouth, they simply suck up the food. Parasites that live on the plants themselves have a special stylet in the mouth.

Nematodes pierce their tissue and inject their digestive juices, and then suck up the food. This is called extraintestinal digestion. Nematodes that are in the body of the «owner» are due to the nutrients produced by them. What nematodes are simply used for their growth and development.

Reproduction and lifespan of nematodes

Basically, all types of nematodes are opposite-sex. Males are smaller than females in size, and the back end is slightly twisted to the side. Reproduction is done sexually. Some species of females, when ready to mate, emit a strong odor to which the male reacts.

And then it covers the female with a copulative bag followed by the introduction of the spicule into the vagina. They mainly lay eggs for procreation, but there are also species of roundworms, which are released by live birth. Free-living nematodes lay in their entire life from 100 to 2,000 eggs. Parasites are more prolific, and this value can reach up to 200,000 in just one day. 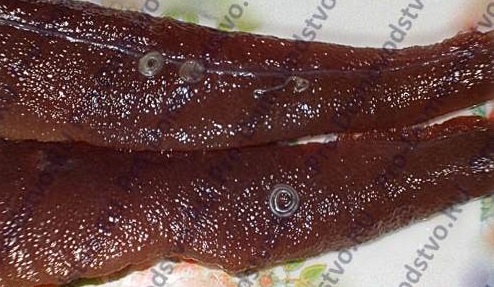 In the photo of nematodes in fish

In the parasite nematodes of animals and humans, ontogeny is more complex. It can take place with the participation of an intermediate «host» or without. In any case, they molt 3-4 times, until they grow to a mature individual, ready for breeding. But for the successful last stage, it should already be in the host’s organism.

The beginning of the life cycle of the nematode begins in the intestine, after fertilization of the female. She goes down into the rectum, where she lays eggs in the anus. After that she dies. The eggs themselves ripen for about 6 hours in favorable conditions. Through dirty hands, they enter the gastrointestinal tract again, re-infection occurs. Turning into larvae, after 2 weeks they become sexually mature individuals. 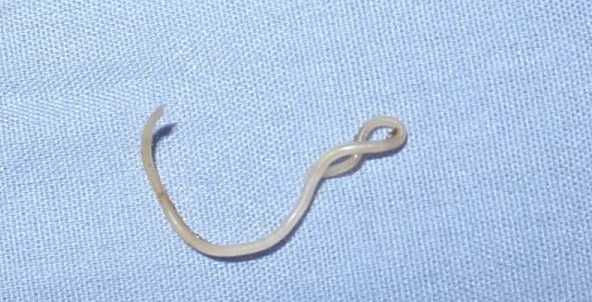 Depending on the type of nematode, the following gradations of their life cycle are distinguished:

Eggs in which the larva matures and enters the soil, after which it enters the body. On average, the life of any nematode lasts about 2-3 weeks.

Symptoms and treatment of nematodes

More than 50 species of nematode parasites can cause disease in humans. When nematodes end up in the human body , the digestive tract is the first to suffer. This can be damage to the intestinal walls and blockage of the bile ducts, which is manifested by a disorder in the stool, pain in the navel or wandering, nausea and vomiting.

Further, nematodes, getting into the bloodstream, migrating throughout the human body, are able to infect absolutely any of his organs. Therefore, symptoms can be as shortness of breath and conjunctivitis, and muscle pain. Also characterized by the development of the general reaction of the body: allergic rashes, itching, decreased immunity, a feeling of constant weakness and nausea. 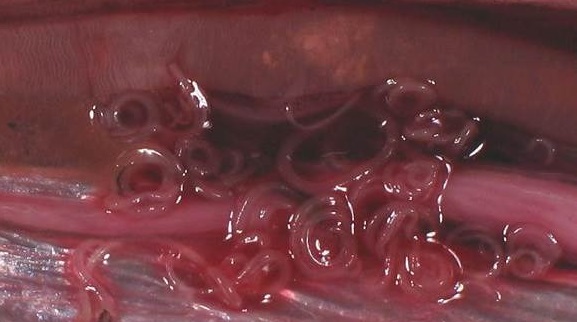 Treatment of nematodes is carried out with drugs or oxygen therapy. The drugs are usually quite toxic, so they are prescribed by a doctor. With oxygen therapy, oxygen is injected into the intestine, and nematodes die without medication.

Our pets are also prone to diseases that are provoked by roundworm-parasites. In cats, the symptoms of infection with nematodes are: frequent, hoarse and wet cough; alternating diarrhea and constipation; skin reactions and exhaustion.

In dogs, it is: vomiting, specific yellow mucous diarrhea; increased appetite; tail biting; lethargy and apathy. If these symptoms appear, take the animal to the veterinarian, where he will prescribe a drug treatment.