Images of fabulously beautiful animals with branchy horns have reached our time. In those days, the main trade of the people was hunting. 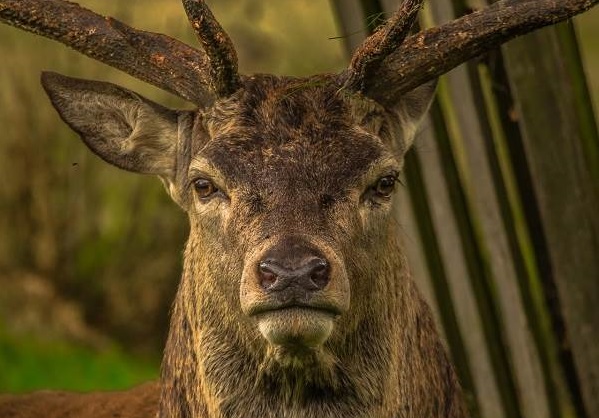 For some reason, this particular animal was the main target for hunters, and neither bears, nor wolves, nor wild boars, of which there was just a huge amount. For some reason, the noble deer interested everyone the most.

Although the hunt for it is difficult to call the usual, uncomplicated entertainment. This sensitive and fast animal is quite careful in everything, it is not so easy to take it with bare hands. First of all, it still needs to be tracked down.

Then, with extreme caution, get close to him in order to deliver a deadly blow. The blow must really be powerful, otherwise the hunter himself may become a victim because the noble Siberian deer can give a fitting rebuff. 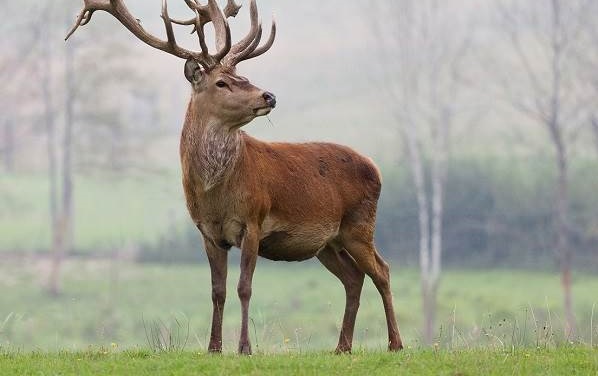 With the successful outcome of hunting, a satisfying life was provided for the whole tribe for a month, or even more. But in very rare cases, misses when hunting a noble animal ended well.

The hunter could not always stay alive and healthy. The wounded deer of the red deer have an incredibly enormous power, it is able to maim and even kill the hunter and everyone near him.

According to the legends of ancient people, it was believed that after the souls of animals, as well as people, there is life after death. For all people, long since the deer is a deeply revered animal. 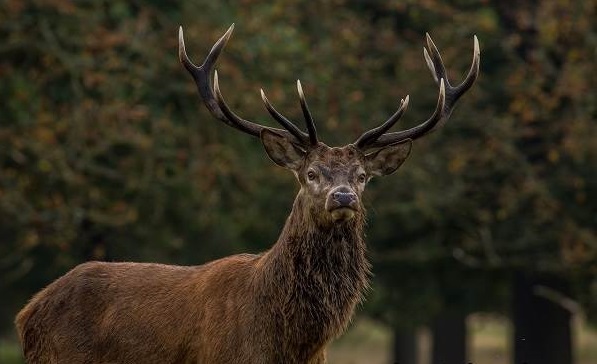 Perhaps that is why the fight between man and deer was equalized by the ancient totem cult. Deer were always divine animals. The belief was that killing more than two marals a year is a great sin, for which sooner or later you will have to pay.

It is easy to imagine from ancient images how strongly inspired the artists who paint this beautiful animal. The process of drawings on the rocks is quite a difficult and time-consuming task.

But all this was done with great effort and love for the benefit of man. People have always had hope about deer. Everyone was confident that his patron spirit would give people well-being and save them vitality.

A photo of a noble deer, his proudly raised head with gorgeous, branched horns leave no one indifferent. Who in real life saw this miracle remain under the impression for a long time. 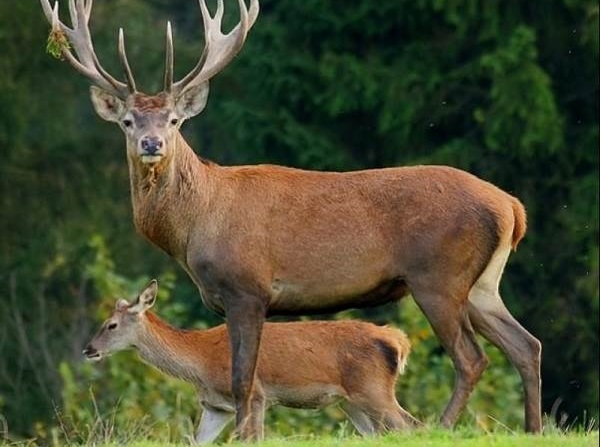 Description and features of red deer

The name itself is a deer, includes several species of deer, differing in weight and coloring. But all representatives of this species have large, branched horns.

The proud posture of the deer indicates to us a great strength and unruly temper. With a huge height of 170 cm and weight up to 400 kg, gorgeous horns of red deer, an animal can easily protect itself from any opponent.

Even the wolves can not afford this beast. They do not always risk attacking him. The only one who can afford to hunt this forest giant is a man.

After many years, people diversified their way of life a little, they learned how to breed pets, so that not only by hunting get their food. But deer are still in great demand due to the fact that they have perfectly tasty dietary meat. It has a very pleasant and delicate flavor. 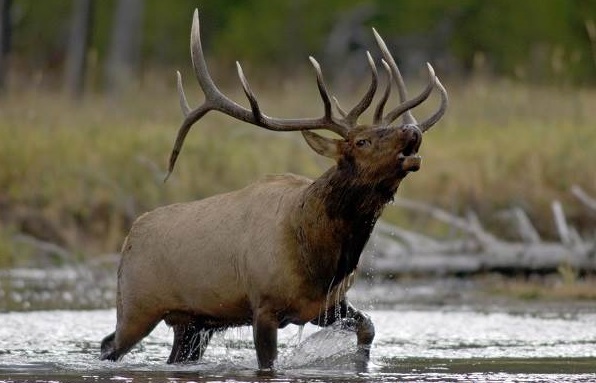 In the photo the red deer

There are so many useful substances and microelements in it that it simply cannot be compared with other meat. It has long been observed that people who often eat venison are less susceptible to various diseases, including oncological diseases.

But even more valuable is the blood of deer. People learned about its healing properties many years ago. It has long been believed that the blood of red deer helps people to maintain their vitality and to postpone the aging process for a long time.

The story tells that the blood of the deer is the most valuable medicine of the shamans. It was she who managed to cure the most hopeless diseases. She was rightly considered the elixir of life. The indigenous inhabitants of Altai and the North are still treated with this miracle cure. 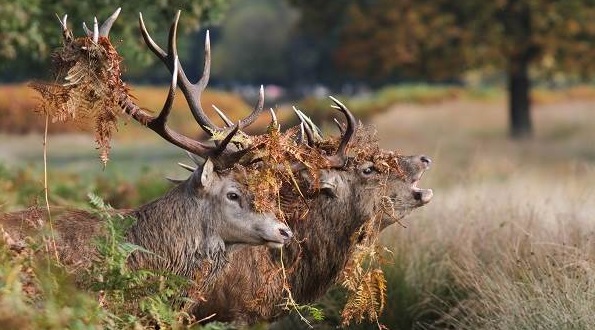 The civilized world is rich in a variety of medicines based on blood and antlers of red deer. The noble deer belongs to the type of chordates, the class of mammals, detachment of artiodactyls, the family of deer.

Different types of deer have different sizes. The average height of these animals ranges from 0.8 to 1.5 m, their length reaches up to 2 m, and their weight is 200-400 kg. There is a small crested deer. Its length is not more than 1 m. And weight is about 50 kg.

The noble deer is so called because it has a very noble, slender posture, with proportional addition, an elongated neck and a light, elongated head. The eyes of the deer are yellow-brown. Near them are clearly visible deep grooves. On the wide forehead a dent is clearly visible. 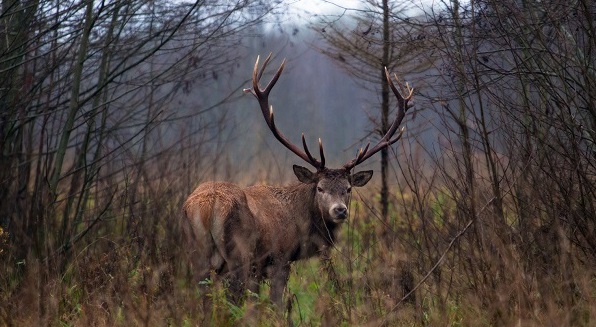 Some deer species have thin and graceful limbs, while others, on the contrary, are too short. But for all the muscularity of the limbs and the fingers are set aside, with membranes at the junction.

The teeth of the animal is an ideal indicator of its age. The degree of grinding of canines, and carved teeth, their curvature and inclination angle allow the specialist to determine with accuracy how old the deer is.

A distinctive feature of these animals are horns. They are not only in hornless water deer and females. Such elegant bone formations are inherent only to males. Reindeer have horns in both sexes, only in females they are relatively smaller.

More than half of the deer shed their horns annually. In their place, new ones form immediately. Initially, they consist of cartilage, and later they overgrow with dense bone tissue.

Their growth and quality are completely dependent on the diet of the animal. A distinctive feature of deer that inhabit the tropics are the horns. They do not reset them for a long time.

Animals living in the equatorial belt, never throw off the horns. This is the main tool for self-defense males. The bigger they are, the deer has more chances to win a duel.

Animal fights are most often arranged for the right to possess a female. The horns of the reindeer with a wingspan of 120 cm help the animal dig up the moss from under the snow.

Thin and short fur is visible on the skin of the deer. That is what he is in the summer. In winter, the fur becomes longer and thicker. His color is very different, from gray to brown with all the palettes between them, spotty and with marks. This is one of the fastest of twenty animals. Hiding from the chase deer develops a speed of 50-55 km / hour. 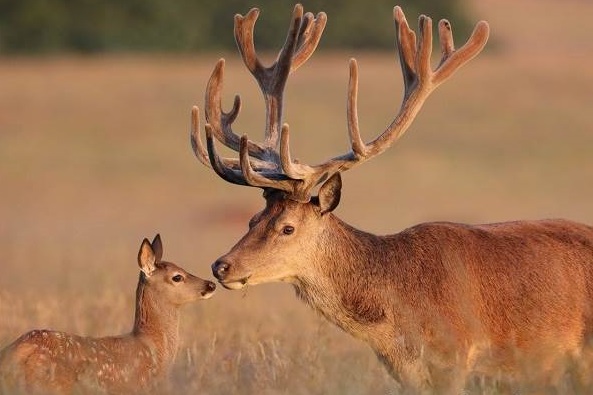 The countries of Europe and Asia, Russia, North and South America, Africa, Australia, New Zealand are the habitats of red deer. For these animals did not notice the whimsical to the habitat.

They are comfortable and on flat surfaces and in the territories of mountainous reliefs. They prefer deer and wetlands, areas of tundra mosses and lichens.

For many species of deer the most favorable places with high humidity. Therefore, they live near water. In the intense heat, animals simply climb into the water and are thus cooled in it.

These are nomadic animals. In summer, deer live in the forests where the grassy meadows. Their feeding alternates with a rest bed in the grass. In winter, they can wander into impassable thickets because there are almost no snow drifts and there is a great abundance of food under a small snowball. 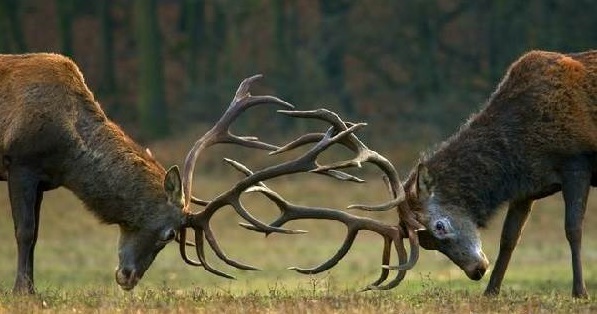 The deer are pretty shy. At the same time, they are nervous and aggressive. In young animals, most often instead of the usual games familiar to their age, the most serious adult brawls occur.

Such fights are somewhat reminiscent of boxing. Two participants of sparring rise on the hind limbs and strike each other with the front. Something more serious is rarely seen.

This applies to males. The female, under the threat of danger to her babies, can without any fear attack the most evil predator. From hitting the feet of the female deer was not broken one back of wolves.

Sometimes they were simply crippled. Males with their legs simply crush wolves. For this reason, even large predators always have a desire to retreat or attack a deer in a large flock.

Wolverine threatens young reindeer. This fat and strong beast is not difficult to break the young maral without experience. Wolverines try to avoid adult deer.

In relation to people, deer have a real fear. They run away with the slightest smell of man. Even the female is not trying to protect her baby when he is in the arms of a man. She silently observes what is happening. It is the most adult female maral that most often stands at the head of a large, motley mixed herd. 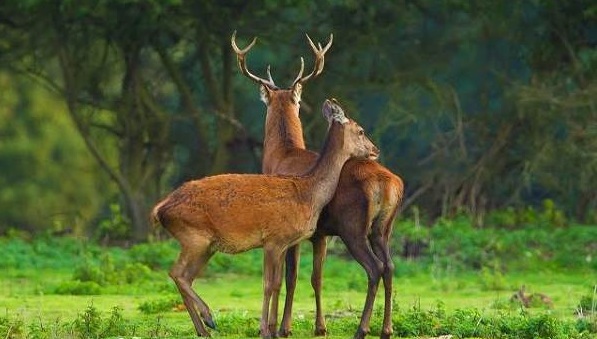 According to the calculations of researchers, there are 51 species of red deer. Some are accustomed to include elks, roe deer, and muntzhaks. In fact, if there are some similarities between them, it is only because they are close relatives.

Species differ in their appearance, geographic distribution, lifestyle and size. They have a lot in common. The only exception is the water deer, which has no horns.

Many of these species have a large number of subspecies. For example, the red deer has more of them than all the other brethren. The Caucasian red deer is considered one of the largest red deer. This is a very valuable copy for science, industry and aesthetics. 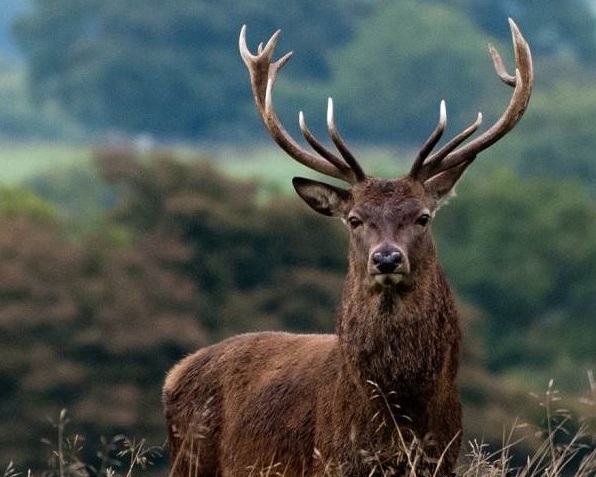 Deer prefer plant food. They love the leaves, buds, annual shoots of trees and shrubs. In the summer, their diet is diluted with mosses, mushrooms and various berries.

Along the coast can often be seen discarded algae. This product marals are eaten with pleasure. Most often, deer eat branches of various deciduous trees, such as oak, beech, ash, willow, wild apple, pear.

Cereals play a great role for these animals, especially in the springtime. If for some reason the feed is not enough, pine needles are used, but this happens in extremely rare cases because this product causes a disturbance in the digestive tract of the animal, especially in its young individuals.

For mating in deer a little unusual time. Usually all mammals do this in spring. In the red deer it all happens in the fall. Mating begins from fierce fights between males.

They are usually accompanied by loud sounds in the form of a roar. After a 9-month pregnancy in late May, early June, a baby is born. The calf is fully formed. 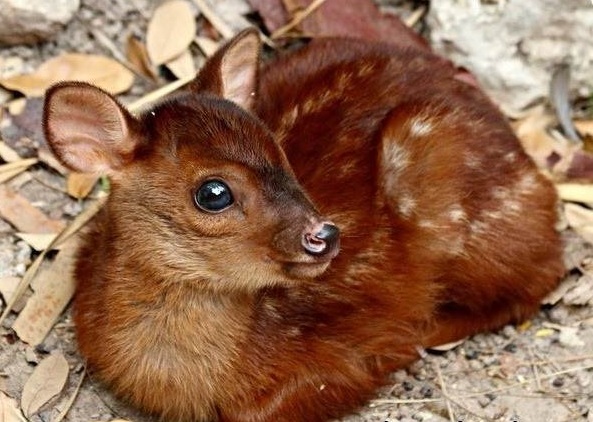 But for the first three days, he prefers to lie in a secluded place in full real estate, hiding in the grass or fern thickets. The only movements he makes to suck the mother.

Already at 7 days of age, babies make the first attempts to become firmer on their feet and follow the female. In two weeks they are already jumping and frolic without any difficulty, and a little later they are moving away from the herd altogether.

In the wild, deer live up to 20 years. In zoos, their life is extended to 30 years. The noble deer is entered in the Red Book and is under reliable protection of people. Some people are interested in breeding them in their household. Buy red deer is quite real. It costs from 2500 dollars.