There is such a joke that the hardy Norwegian forest cat can bring a hammer to the Scandinavian god Thor. Felinologists are still arguing about this mysterious breed. Some believe that Vikings were brought into the Norwegian forest of cats, others that the breed appeared only at the end of the 16th century. 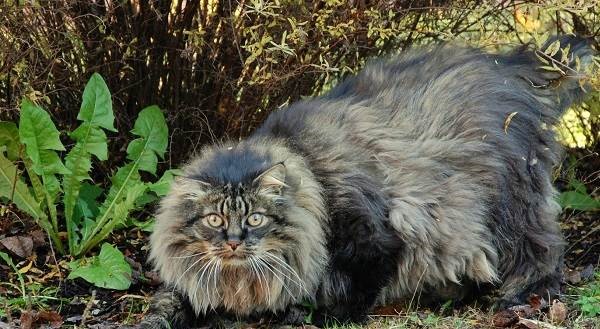 If you believe the first theory, it can be assumed that the ancestors of the fluffy hunters were Angora cats. That they could deliver from Scotland Scandinavian sailors in the 11th century.

Proponents of this view are confident that the cats quickly adapted to the harsh climate, got the hang of climbing trees, and “mastered” fishing. In fairy tales, Norwegian forest cats appeared in the 19th century.

However, if you look closely at the old engravings, the goddess of love and fertility, Freya, loved to ride in a chariot drawn by big fluffy cats. 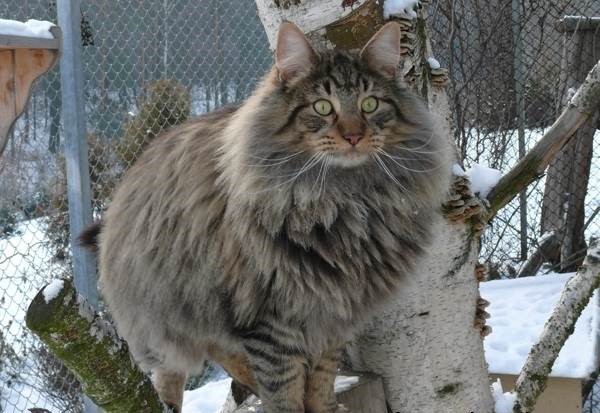 The photo of the Norwegian Forest Cat shows that the pet looks like a lynx. This is a long-haired beauty with thick fur and, as a rule, tassels on the tips of the ears. Visually, the beast seems just huge, in fact, representatives of the breed weigh about 5-8 pounds. Their length usually reaches 40 centimeters.

According to historical data, the Scandinavian forests have made cats excellent hunters who value their own freedom. Despite this, at home, «little lynx» get along perfectly.

The owners say that this is a very curious and sociable breed of cats. The Norwegian forest hunter never loses self-worth, while being very patient. The cat is friendly towards other pets and small children. 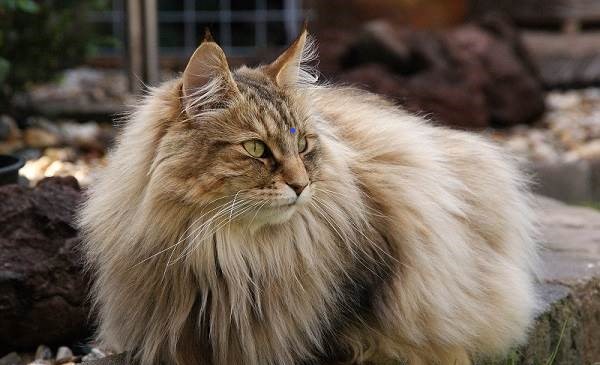 In general, the character can be divided into several features:

-Bravery. The forest beast is not afraid of strangers and respects the height (the entresol, the closet is a favorite place).

— Freedom. This is really a cat who walks where he wants himself. The fluffy character of the Norwegian fairy tales can «disappear» for the whole day and return only when it sees fit.

-Friendliness. Cats quickly find common language with households and other pets. However, no one from among the members of the family is chosen for the owners.

-Activity. This is a very energetic pet who loves to run and play. At the same time, the “little lynx” loves children very much, and even having played with them, keeps the situation under control and does not release its claws.

«Veal tenderness» Norwegians do not allow. Cats in every possible way dodge «hugs», and also prefer to lie next to a man, and not huddle on his lap. Cats live for 10-16 years, but there are also long-livers. 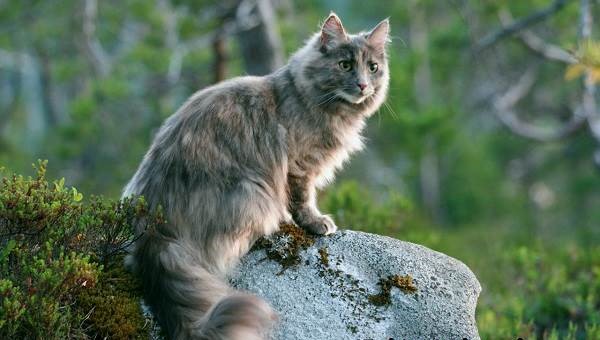 Description of the Norwegian Forest Cat should start with her amazing fur. Representatives of the breed are wearing a coat of two layers. The outer fur is long, shiny and soft to the touch.

Inside the layer consists of oily, water-repellent hairs that fit snugly together. Around the neck, “little lynxes” wear so-called “melodies,” that is, folds of fur. Those who want to buy a Norwegian cat for exhibitions, should carefully read the standards of the breed.

— the head of a handsome man resembles a triangle in shape, an elongated profile, a strong-willed chin;

-the eyes are large, oval, the color should be in harmony with the color;

-the body of the Norwegian cat is strong, long and muscular. In this case, the hind legs are longer than the front;

-the tail should be fluffy, not shorter than the body, evenly lowered. 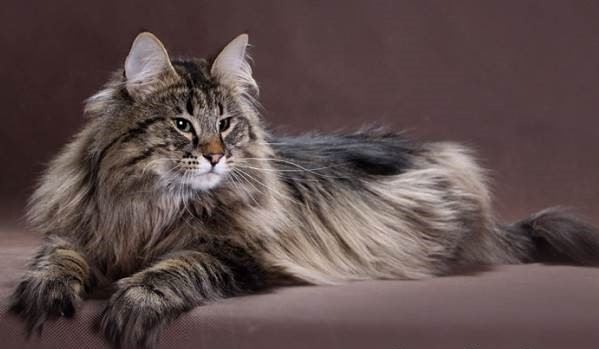 On the photo is a forest Norwegian cat

It is noteworthy that at the bottom of the body and behind the paws, only one layer of wool (inner) grows. To the color of the Norwegian cat, felinologists usually do not quibble. Almost all colors are recognized, except cinnamon and chocolate.

Also there should not be their weakened shades (faun and lilac). Cats with a non-standard appearance are not allowed for breeding, but they can become excellent pets.

Care and maintenance of a Norwegian Forest Cat

The cat from the Norwegian forest practically does not need to be cared for. Despite its long and thick coat, it does not require frequent combing. Wool almost never rolls and does not tangle.

Hairdressing procedures can be done once a week. Exceptions are periods of molting, then a good owner will have to take a comb every day.

Take a bath severe «Norwegian» is not necessary. Only if the cat «nagulyat» parasites or severely stained. But the ears should be cleaned regularly — a couple of times a month.

Fluffy hunters will be happy for any walking. However, the owners must necessarily bring a leash. It is worth remembering that in nature, «little lynxes» were very fond of climbing high trees. 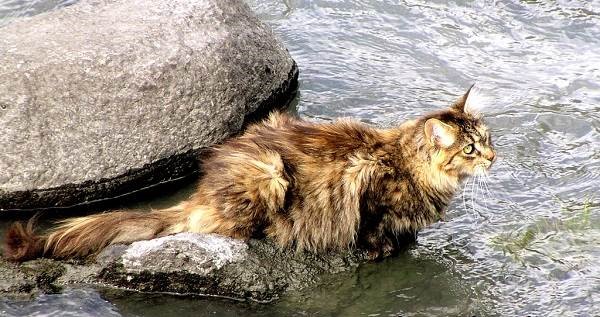 Frivolously Norwegian cats feel in a private house, where they can go outside. To prevent a flea from getting an animal, it is recommended to buy a special collar for it.

The diet of the mischievous pet must be balanced. This can dry elite food or natural food. In the second case, the menu must include:

The kitten of the Norwegian Forest Cat must be vaccinated. The first vaccination is given at the age of two months, the second about six months. Vaccinations need to be repeated once a year. Before the vaccine is recommended proglysthogonit animal, and pass the general tests. 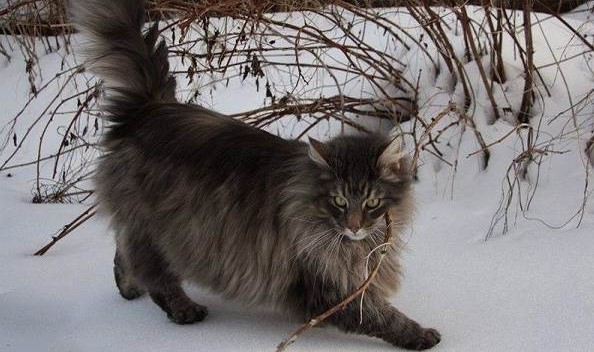 Currently, there are several specialized breeding nurseries in Russia and Ukraine. They are registered in Moscow, St. Petersburg and Kiev. Also, kittens are sold by private breeders. Fluffy friend can be found on the Internet or through a friend.

The price of a Norwegian Forest Cat ranges from 2,000 to 25,000 rubles. The cost directly depends on the class of the kitten (pet, breed, show), and is also related to the pedigree of the parents and the awards of the nursery.

When choosing a baby should pay attention to the mom-cat (her color and behavior). And, of course, on the very mischievous. The kitten must be active, curious, intimidating.

The hair and eyes should be clean and the gums pink. It must be remembered that the breeding will not allow an animal with a short tail, small ears or with an irregularly shaped head.

On the other hand, those who choose just a pet, you can ignore the standards of the breed. According to reviews of the owners of the Norwegian cats, these animals, even without awards and exhibitions, are the very best, albeit masterful friends.

Such cats are called very smart, even wise. Parents of young children are especially happy: “Norwegians” do not scratch, do not bite, but on the contrary protect their little owners.