For the first time, large and flightless birds, outwardly similar to ostriches, were seen by Europeans at the very beginning of the 16th century. And the first description of these creatures in literature refers to 1553, when the Spanish explorer, traveler and priest Pedro Cieza de Leon in the first part of his book The Chronicles of Peru. 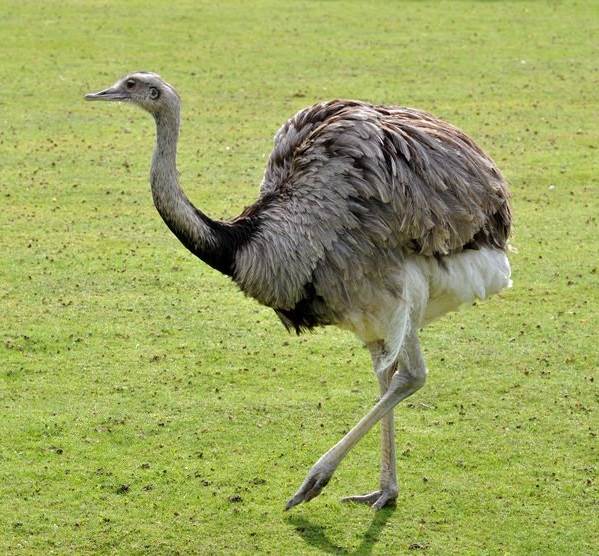 Despite the significant external similarity of the African ostriches Nanda, the degree of their kinship still causes controversy in scientific circles, since in addition to the similarity, the differences between these birds abound.

Description and features of the ostrich Nandu

Unlike its African relatives, the ostrich Nanda in the photo — and the camera reacts quite calmly, not trying to hide or run away. If this bird doesn’t like something, then the rant comes up with a throaty cry, very much like a growl of a large predator, such as a lion or puma, and if you don’t see that the sound is made by an ostrich, it’s impossible to determine its belonging to a bird’s throat. .

Also, a bird can attack a person who comes too close, spreading wings, each having a sharp claw, stepping toward a potential enemy and hissing threateningly.

The size of the ostrich rhea is much smaller than that of African birds. Growth of the largest individuals reaches only one and a half meter mark. The weight of South American ostriches is also significantly less than that of African beauties. Ordinary Nanda weighs 30–40 kg, while Darwin’s Nanda is even smaller — 15–20 kg. 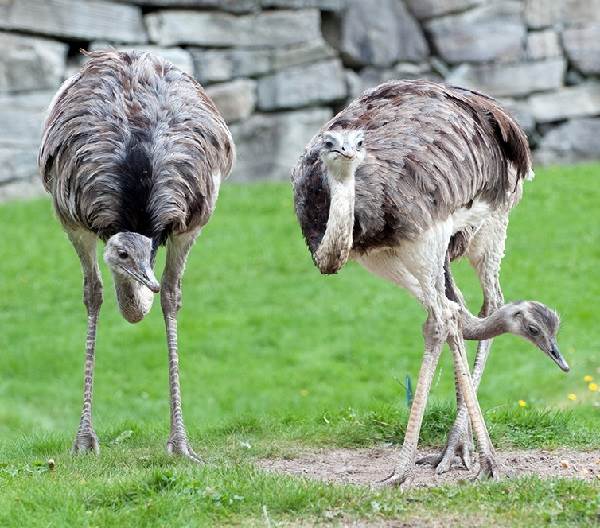 The neck of South American ostriches is covered with soft, dense feathers, and they have three fingers on their feet. Regarding the speed when running, the ostrich Nandu can race, giving out 50-60 km / h, while balancing with widely spaced wings. And to get rid of parasites, nandu are lying in the dust and in the dirt.

According to the descriptions of the first Portuguese and Spanish explorers, these birds were domesticated by Indians. With that, not only in the usual understanding of poultry.

Nanda not only gave people meat. Eggs and feathers for making jewelry, they acted as dogs, performing security and, possibly, hunting and fishing functions. These birds swim well, even wide rivers with a fast current do not frighten them.

Lifestyle and habitat of the ostrich Nanda

Ostrich Nandu lives in South America, namely in the territory of Paraguay, Peru, Chile, Argentina, Brazil and Uruguay. You can meet Darwinian Nandu on a high plateau, this bird feels great at an altitude of 4000-5000 meters, as they have chosen the extreme south of the continent with a very harsh climate.

The natural environment for these birds are the vast savannas and lowlands of Patagonia, large mountain plateaus with small rivers. Besides South America, a small population of rhea lives in Germany. 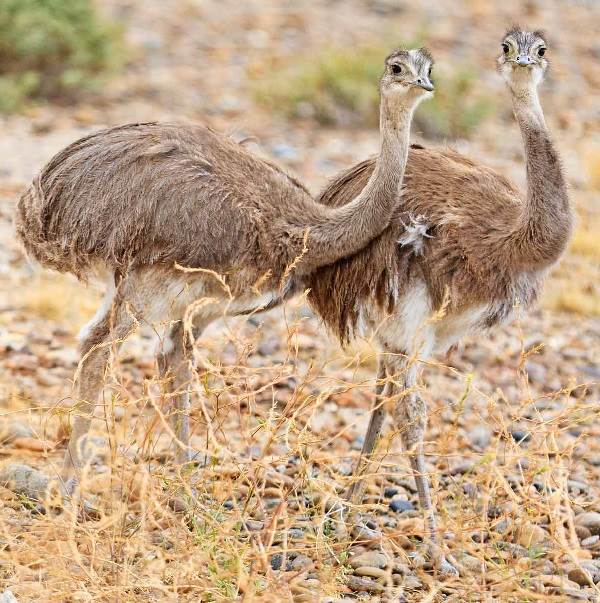 The culprit of such a migration of ostriches was an incident. In 1998, an ostrich farm in the north-east of the country, in the town of Lübeck, ran a flock of nandus, consisting of several couples. The reason for this was the lack of strong enclosures and low hedges.

As a result of the oversight of farmers, the birds were free and rather easily adapted to the new conditions of life. They live in an area of ​​approximately 150-170 square meters. m, and the number of the pack is close to two hundred. The livestock has been regularly monitored since 2008, and scientists from all over the world come to Germany to study the behavior and life of the Nanda ostriches in winter.

These birds live in natural conditions in flocks of up to 30-40 individuals, for the duration of the mating season the flock is divided into small groups-families. There is no strict hierarchy in such communities.

Nanda is a self-sufficient bird, and a collective way of life is rather a necessity rather than a need. If the territory in which the flock lives is safe, then the older males often leave their relatives and leave, starting to lead a solitary lifestyle. 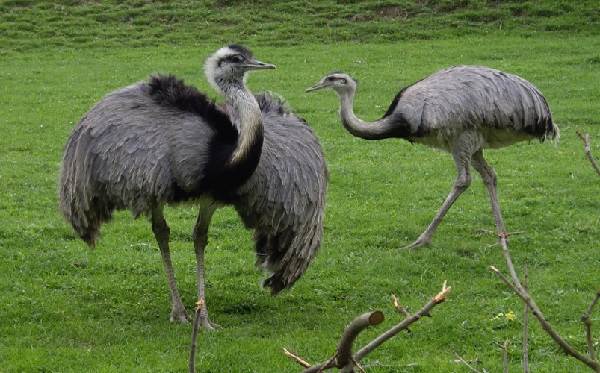 Ostriches do not migrate, lead a sedentary life, with rare exceptions — in case of fires or other disasters birds search for new territories. Very often, especially on the territory of the pampas, flocks of ostriches are mixed with herds of guanaco, deer, cows or sheep. Such friendship helps survival, faster detection of enemies and protection from them.

What is common in the diet of ostriches, nandu and cassowary, so it is their omnivorous. Giving preference to grass, broadleaf plants, fruits, grains and berries, they will never give up insects, small arthropods and fish.

They can eat and carrion, and the waste of an artiodactyl. It is believed that the nandu are able to hunt snakes, and, in a tame form, to protect human housing from them. But there is no scientific evidence for this. 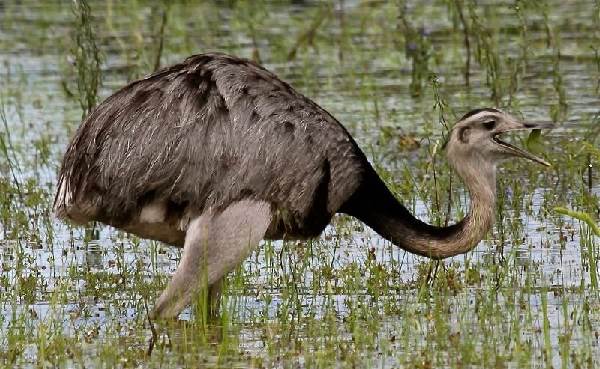 Although these birds are excellent swimmers who love to frolic in the water and catch a few fish, they can do without drinking water for a long time. Like other birds, ostriches periodically swallow gastroliths and small pebbles, helping them to digest food.

Reproduction and life expectancy of the ostrich rhea

In the marriage period, Nanda are polygamous. The flock is divided into groups of one male and 4-7 females and is removed to its own «secluded» place. Rundoo’s ostrich egg is about four dozen chicken, and the shell is so strong that it is used for various handicrafts that are sold to tourists as souvenirs. According to the records of European researchers, in Indian tribes, the shells of these eggs were used as dishes. 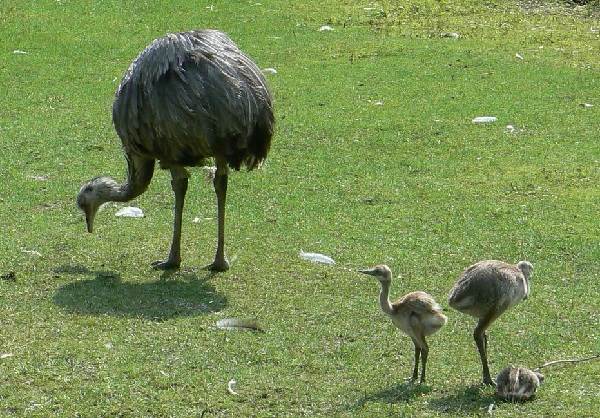 Females lay eggs in a common nest, in general, from 10 to 35 eggs are laid in the clutch, and the male incubates them. The incubation lasts an average of a couple of months, all this time the ostrich Nanda eats what his friends bring him. When the chicks hatch, take care of them, feeds and walks. However, the majority of babies do not even live to a year for various reasons, not the last of which is hunting.

Though it is possible to hunt a rape in most of the countries in whose territory they live and is prohibited, these bans do not stop poachers. Sexual maturity in females occurs in 2.5-3 years, and in males in 3.5-4. These birds live on average from 35 to 45 years, under favorable conditions, unlike their African relatives who live to 70.

Interesting facts about the ostrich Nandu

Speaking about the ostrich Nandu, it is impossible not to mention where this interesting name of this bird came from. During the mating season, these birds exchange cries in which the “Nanda” consonance clearly sounds, which became their first nickname, and then the official name. 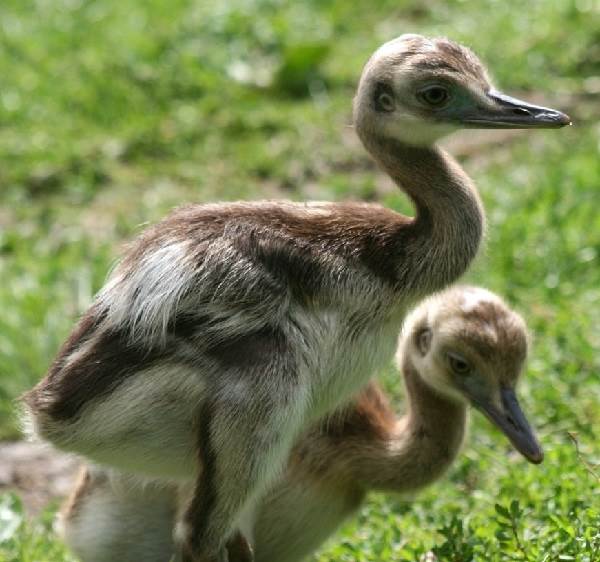 Nanda ordinary or northern, scientific name — Rhea americana;
Nandu Small or Darwin, the scientific name is Rhea pennata.
According to zoological classifications, rhea, as well as cassowary, and emus are not ostriches. These birds were divided into a separate detachment — nanduobraznye in 1884, and in 1849 the family Rundy was defined, limited to two species of South American ostriches.

The oldest excavated fossils, reminiscent of modern nandu, are 68 million years old, that is, there is every reason to believe that such birds lived on earth even during the Paleocene and saw dinosaurs.