Sea wasp belongs to the class of jellyfish and is one of the species of marine streaks. Looking at this beautiful jellyfish, you will never think that it is among the ten most dangerous creatures on the planet. 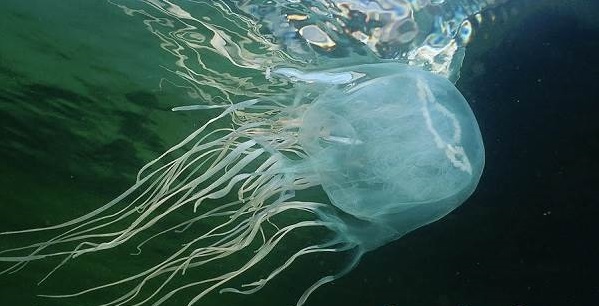 Why was she called the sea wasp? Yes, because it «stings» and the affected area swells and blushes, as when an insect was bitten. Nevertheless, it is believed that more people die from its bite than from shark attacks.

Sea wasp is not the largest jellyfish in its class. Its dome reaches the size of a basketball ball, which is 45 cm. The weight of the largest individual is 3 kg. The color of the jellyfish is transparent with a light bluish tint; this is due to the fact that it itself consists of 98% of water.

The shape of the dome resembles a round cube, from each corner of which they extend along a bunch of tentacles. Each of the 60, is covered with a variety of stinging cells, which are filled with deadly poison. They react to chemical signals of protein nature. 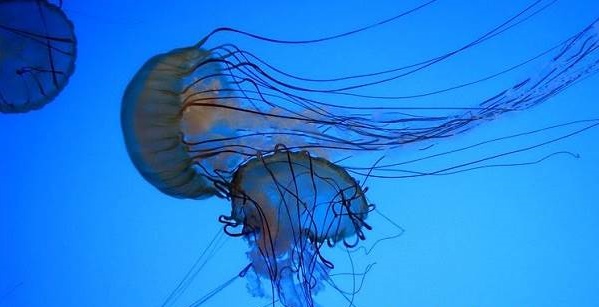 At rest, the tentacles are small — 15 cm, and at the time of the hunt they thin and stretch to 3 meters. The decisive deadly factor in an attack is the total size of the stung tentacles. If it exceeds 260 cm, then death occurs within a few minutes. The amount of poison of one such jellyfish is enough for 60 people to say goodbye to life in three minutes. The danger of the Australian sea wasp and the fact that it is almost not visible in the water, so the meeting with it happens suddenly.

The biggest mystery for zoologists are 24 eyes of this jellyfish. At each corner of the dome, there are six of them: four of which react to the image, and two remain to light. It is not clear why the jellyfish are in such quantity and where the information received is fed. After all, it lacks not only the brain, but even the primitive central nervous system. The respiratory, circulatory and excretory systems of the cubomedus are also absent.

The sea wasp inhabits off the coast of Northern Australia and to the west in the Indian Pacific. Recently found jellyfish and on the coast of Southeast Asia. Tourists who visit Vietnam, Thailand, Indonesia and Malaysia need to be more careful when swimming in open waters.

The nature and lifestyle of the sea wasp

The sea wasp is an active dangerous predator. However, she does not chase prey, but motionlessly freezes, but at the slightest touch, the victim gets her portion of poison. A jellyfish, unlike spiders or snakes, stings more than once, but uses a whole series of «bites». Gradually bringing the dose of poison to the deadly mark.

The Australian sea wasp is a beautiful swimmer, it easily turns and maneuvers between algae and in coral thickets, developing a speed of up to 6 m / min. Jellyfish are becoming more active with the onset of twilight, rising to the surface in search of food. In the afternoon, they lie on a warm sandy bottom in shallow water and avoid coral reefs.

These cubomeruses pose a great threat to a person’s life, but they themselves never attack him, but rather prefer to swim away. A sea wasp can bite a person only by chance, more often divers without special costumes become a victim. In contact with poison, the skin immediately turns red, swollen and unbearable pain is felt. The cause of death is most often cardiac arrest.

It is very difficult to provide timely assistance in the water, but it does not work on the shore, not one of the available methods. Neither vinegar, nor water with cola will help. Categorically you can not bandage the affected place.

The only thing that can be done is to introduce antitoxic serum and urgently deliver the victim to the hospital. But even then death can occur within a day after contact. Place burn sea wasp, like a ball of red snakes, it can be seen in the photo. 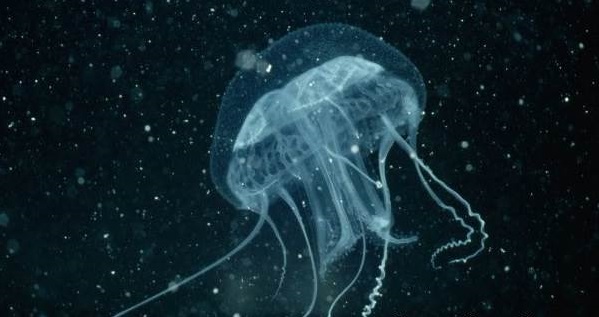 It’s amazing that you can even poison yourself with the poison of a dead sea wasp. For a week, it retains its toxic properties. The cause of a burn can even be the poison of a dried tentacle after it gets wet.

Around the coast of Australia in a large number of jellyfish appear in the summer months (November — April). To protect travelers from sea wasps, public beaches are surrounded by special nets through which this dangerous jellyfish cannot swim. In unprotected places, special signs are installed that warn tourists about the danger.

They feed on sea wasps small fish and benthic organisms. Their favorite treat is shrimp. She has such a way of hunting. The sea wasp pulls out its elongated tentacles and freezes. The prey swims past, which hurts them and immediately the poison enters its body. She dies, and the jellyfish catches her and swallows.

These sea wasps are dangerous to all living organisms except the sea turtle. She, the only one on the planet, is protected from them. Poison simply does not act on it. And the turtle with pleasure eats this kind of jellyfish.

The breeding season at jellyfish begins in the summer months, then they, gathering in whole «swarms» swim up to the shores. At this time many beaches in Australia are closing. The breeding process of the sea wasp is interesting. It combines several paths: sexual, budding and division.

The male throws a portion of sperm directly into the water, not far from the floating female. The latter swallows it and the body develops larvae, which at certain times, settling on the seabed, are attached to shells, stones or other underwater objects. 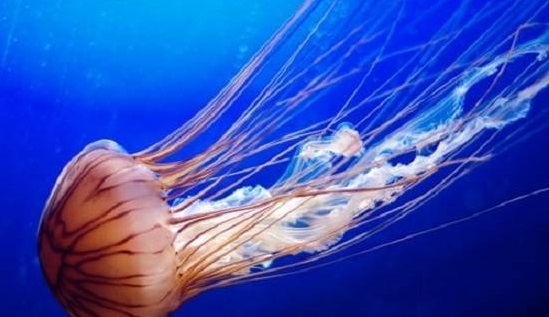 After a few days, it becomes a polyp. He, gradually multiplying by budding, grows a young meduska. When the sea wasp becomes independent, it breaks away and swims away. The polyp itself then instantly dies.

Jellyfish breed once in a lifetime, and then die. Their average lifespan is 6-7 months. During which time, their growth does not stop. Sea wasps do not stand on the verge of extinction as a species and their multiplicity is not in doubt that they will not appear on the pages of the Red Book.