Dolgonog , better known as Cape Killman , is the only member of the family. Today it is not listed in the Red Book, in which it was until 2011, and in fact is not under human protection, since the population of animals is quite numerous. 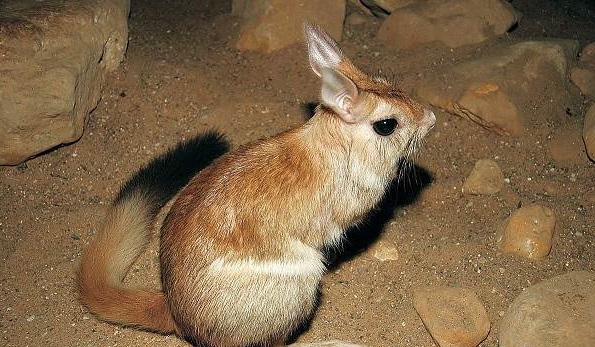 On the contrary, among the local population of a number of African countries, hunting for long-range grass is considered to be very common due to its frequent field raids with the destruction of agricultural crops.

The fur of the rodent is not of great value, but the meat of the animal is in high demand and is among the favorite delicacies of the inhabitants of the continent.

The Cape Longshank belongs to mammals and belongs to the rodent squad. The length of their body ranges from 330 to 420 mm, and their weight rarely exceeds four kilograms. The animal has a thick and soft hairy brown, sandy or reddish color with a long fluffy tail. 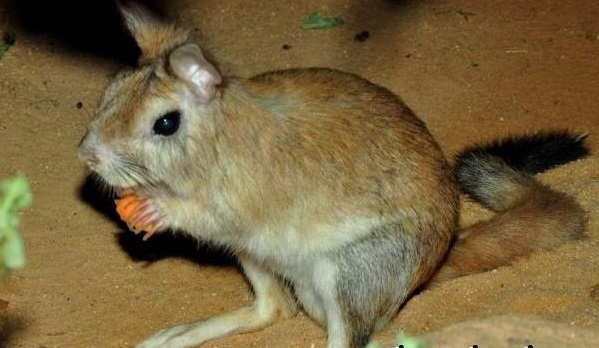 The animal is the owner of a shortened head on a muscular thick neck with a dull face and large eyes. Due to the peculiarities of their eyes reflect the light of car headlights, long-legs are visible from afar at night.

This allows drivers to reduce speed in advance or to make a safe maneuver, having traveled around a rodent that suddenly jumped out onto the roadway. The claws on the hind legs are very hard and form a kind of hoof, which, in combination with developed limbs, allows the long-legged leg to make several meters long jumps and cleverly walk away from his pursuers.

The claws on the front paws are sharp and strong, and with their help the animal copes well with the task of digging even hard soil. Another interesting feature of long-hornbills is the fact that sixteen of the twenty teeth of a rodent do not have roots and grow throughout life, since they are rather quickly ground due to the consumption of large quantities of coarse food of plant origin.

Animals settle mainly along river banks with sparse vegetation and dry sandy soil, in which long-legged people break through long holes up to several tens of meters in length with a system of emergency exits and a cozy bedroom. In its shelter, the animal spends most of the day fleeing from the languishing African heat.

At the same time, the entrance to the dwelling of the dolphon usually clogs with the similarity of a cork rolled up from dense soil or a tuft of grass so that a snake or other predator does not fit into the hole .

Dolgonogues are most active in the dark. With the onset of the evening, the rodent rapidly flies out of its own hole. He does this in order not to become the prey of the beast waiting for a victim at the entrance to the dwelling. 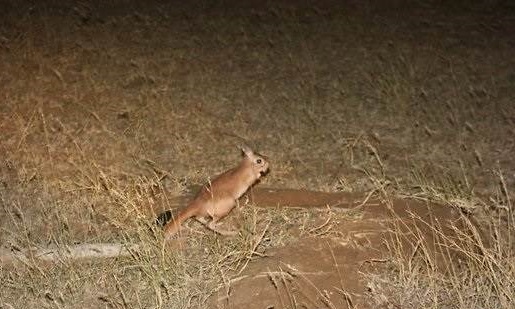 However, if the long-legged person does not feel in danger, he can slowly mince on four limbs in search of food, without moving a long distance from his own hole. Under adverse conditions and the lack of food nearby, the animal is able to travel a few tens of kilometers overnight.

Dolgonogues are quite social animals, and most often they build their burrows close to each other. However, they actually do not show aggression towards their relatives and get along quite peacefully.

Each dwelling is inhabited by a couple with young offspring or one long-legged. During sleep, rodents curl up in a ball, hiding with their own tails or occupy a sitting position, stretching their hind legs.

Dolgonog is getting acclimatized at home, however, those who decide to start such a pet should be aware that he will sleep all day, waking up only in the evening and showing various activities until the morning with rustling and trampling, making it difficult for all inhabitants of the apartment to sleep. So such an animal is suitable exclusively for nocturnal people.

Springweed — this is not a type of rodent, associated with a particular season. This is a universal vehicle in the famous role-playing game World of Warcraft, which many users hunt. In order to comfortably move not only on the earth’s firmament, but also on the surface of the water, there is an azure water long-legged . 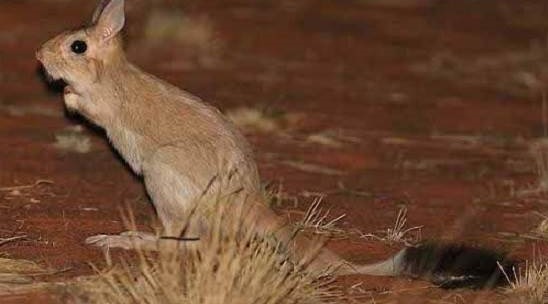 Dolgonogues feed mainly on plant food, and the basis of their diet consists of various fresh herbs, succulent roots, leaves from low-growing bushes, bulbs and tubers.

However, in some cases, rodents can diversify their menu of protein food of animal origin such as caterpillars, beetles , locusts and other insects.

Animals are also frequent raids on the fields of wheat, oats, barley and other cultivated plants. Water for a longwalker is not a necessity, since it in sufficient quantities replenishes its reserves directly from food or by licking dew from the leaves of plants.

Cape long-legged dogs reach sexual maturity by gaining a body weight of up to two and a half kilograms. The female for a year can bring from two to four litters. Pregnancy lasts about three months, after which one cub is born (in very rare cases, two). 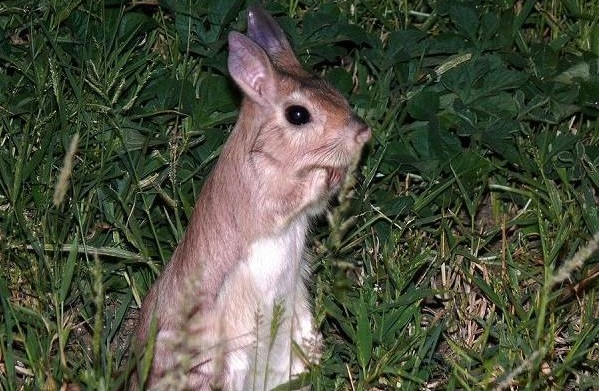 After about seven weeks, the lactation period ends, and young long-legged dogs become completely independent. The average life expectancy of rodents is fourteen years, but not all individuals are able to live to that age, because long-legs have many enemies among predatory animals. People also love the meat of these animals, so they hunt them or flood their holes with water, setting traps at the entrance.