Features and habitat of the phalanx spider

Phalanges or solpugs call a whole detachment of arachnids, which has about 1000 individual species. The phalanx spider looks very frightening because of its large size and creepy jaws.

The average length of an adult individual varies from 5 to 7 centimeters, the body is covered with long, thin, usually blond hair, as well as the limbs. 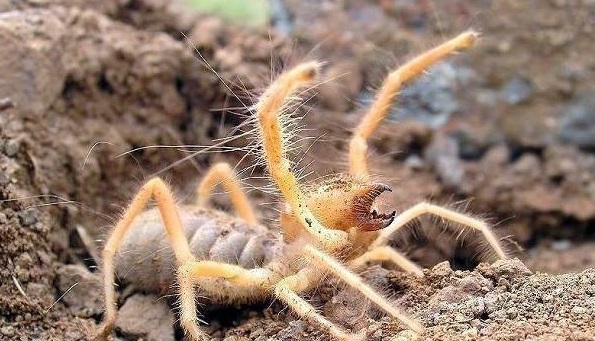 Directly on chelicera teeth are located, a different type may have a different number of them. The power of these limbs plunged into horror the ancient people, who at different times composed various legends about the extraordinary power of this spider and its habit of cutting hair and wool in order to cover their underground passages with them. 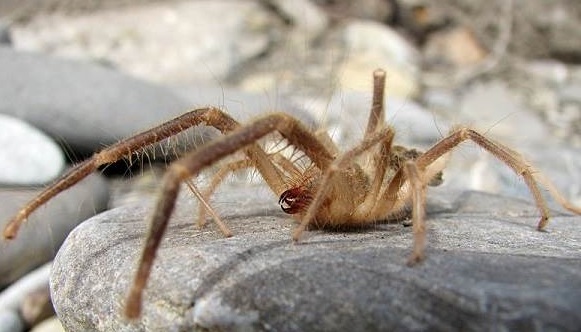 Of course, phalanxes can remove excess hair from the victim’s body, they also have enough strength to make a hole in the skin and even break the thin bird’s bones, but this will be completely gastronomic, rather than everyday character.

Immediately before and during the attack, as well as for the protection and scaring of enemies, the solpug rubs the chelicera against each other, as a result of which a shrill squeak is issued. Phalanx camel spider prefers to live in desert areas.

It is widespread in the countries of the former CIS — the south of Crimea, the Lower Volga region, Transcaucasia, Kazakhstan, Tajikistan and others. That is, despite the preferred living conditions, it is possible to meet the phalanx spider in Volgograd, Samara, Saratov and any other large city, but it’s great rarity.

In the case of the penetration of this animal into a person’s dwelling, it is very difficult to get rid of the phalanx spider due to its fast movement speed, frightening appearance and aggressiveness towards a person.

In order to avoid unwanted and extremely painful spider bites, the phalanx should wear thick gloves in the fight against it, dress the pants with socks, it is best to wipe it out of the room with a broom or broom. 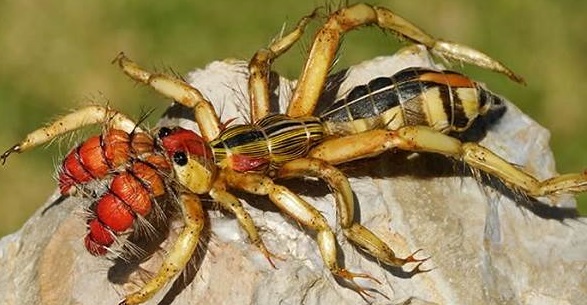 In the photo camel

In the photo camel phalanx spider Small individuals are not able to rule with the thick skin of a person, but larger brothers can bite through it. As a rule,

human habitation is of no interest to the spider, however, nocturnal predators can come to light. It is believed that the spider does not attract the light itself, but other insects that fly onto it.

Thus, having found the source of light, the spider greatly simplifies the hunting process for itself. An interesting fact is that this bite is scary rather for hygienic reasons — the phalanx spider itself is not poisonous.

On ribbed chelicerae, the decomposed remains of its past victims can be stored for a long time, which, if it enters the human body, can provoke dire consequences from simple irritation to infection of the blood.

The nature and lifestyle of the phalanx 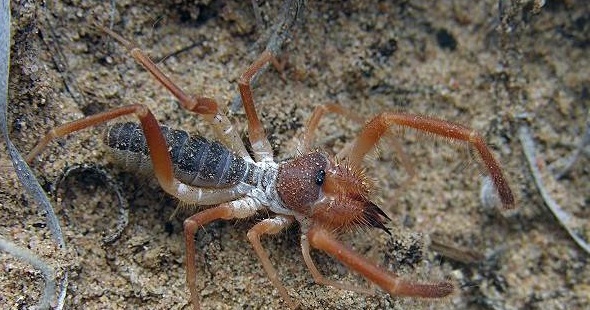 Representatives of most species of solpugs go hunting at night, but spend the day in their burrows or any other place for that. It is noteworthy that some phalanxes return each time to their own burrows and can live in one place all their lives, while others — on the contrary, move a lot and dig a new hole each time in a new place.

Some species are awake during the day. When attacking the phalanx, you can hear a loud piercing squeak, which is obtained as a result of the friction of its claws. Thus, she intimidates the enemy, however, this is not the only trump card in her arsenal.

The phalanx spider description often boils down to powerful ticks, capable of biting even small bird bones, however, solpugs also have long limbs and are capable of speeds up to 16 km / h. 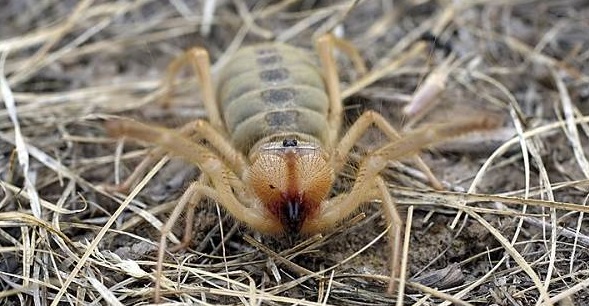 Representatives of all types of this order are extremely aggressive towards all living creatures that they encounter on their way, regardless of size. Also, phalanxes aggressively treat their fellows.

The spider absorbs a large amount of food every day; it is absolutely not picky about food. The phalanx is able to catch and eat a small lizard, chick or rodent, practically any large insect with which it is able to cope. Overeating becomes a frequent cause of spider death, as if food is within easy reach, the phalanx will be eaten all the time. 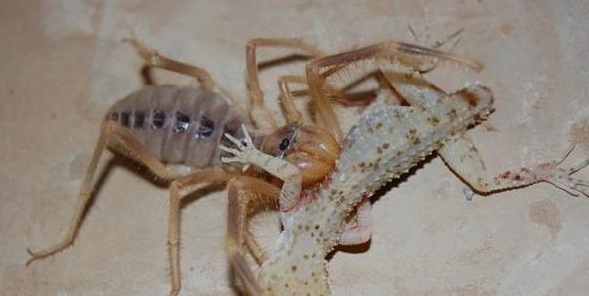 Mating often occurs in the dark. The female informs the male about the readiness, emitting a special smell. The famous spiders’ chelicerae take part in the process of fertilization — it is they who place the spermatophore in the sex hole of his companion.

All actions of both participants are built solely on reflexes, if for some reason, the female “peels off” from the male, he will still finish what he has begun, but to no avail. In the process of fertilization, the female practically does not move, sometimes the male simply drags her behind. But, immediately at the end of the process, it becomes very aggressive.

Also, after mating, the female has a sharp feeling of strong hunger, so she begins to actively hunt. If the male does not have enough time to quickly retire to a considerable distance, she can eat him too. 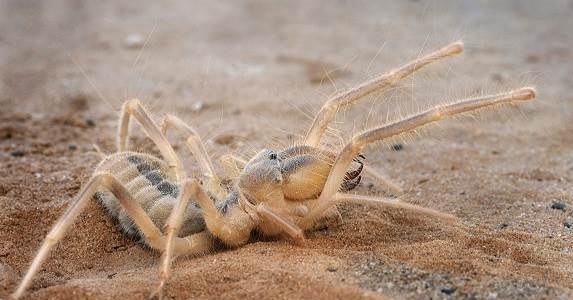 Before laying, the female digs a small depression and lays up to 200 eggs there. After 2-3 weeks, small, motionless bald spiders will appear. After a few weeks, they survive the first molt, their covers become firmer, the first hairs appear, and then the young begin to move on their own.

The female takes care of the spiders, protects them and feeds until they reach a certain maturity and are strong enough.

In cold seasons, spiders find a relatively safe place and there they hibernate for a long time. Representatives of some species may remain in this state during the summer months. The exact number and frequency of molting of the spider phalanx is not yet known to science. Also, there is no reasonable information regarding the life span of the solpug.