Bakers — it is surprising animals. Externally they are very strongly similar to pigs therefore, still quite recently as their those and considered, but now carry to family of not ruminant artiodactyl mammals. 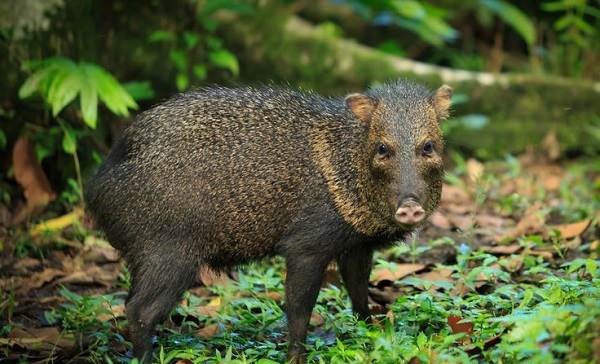 However, perhaps, biologists once again will reconsider the position concerning classification as pigs bakers actually they have much in common with the ruminant. It is considered to be that bakers – aboriginals of the New World, however it not so. Remains of their ancestors often find in the territory of Western Europe that allows to assume that in the Old World these surprising animals either died out, or assimilated with boars.

Features and habitat of pigs bakers

Pigs bakers of a photo — and telegenic animals. Having noticed the person with a video camera or a photolens, they assume a serious air, stop, in literal sense posing for the removing. 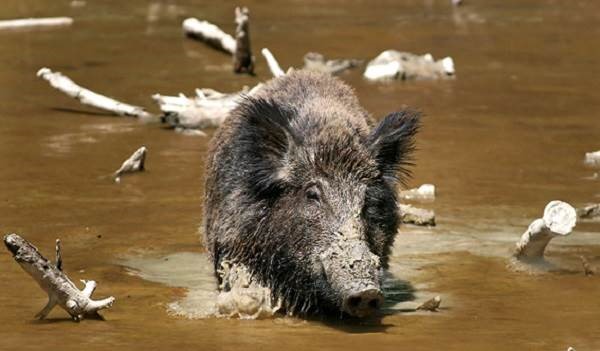 There live these surprising creations on the American continent, they can be met in reserves in the southwest of the USA, in the territory of South America along all coast of the Pacific Ocean, in the west of Argentina, in Ecuador and almost in each corner of Mexico. Bakers are absolutely unpretentious to climate and are almost omnivorous therefore the area of their dwelling is so wide.

Today to people four species of these wild pigs are known, and two of them were rediscovered in the twentieth century, in the course of development of the lands covered with rainforests and heathlands of the savanna, and before were considered as the died out long ago. 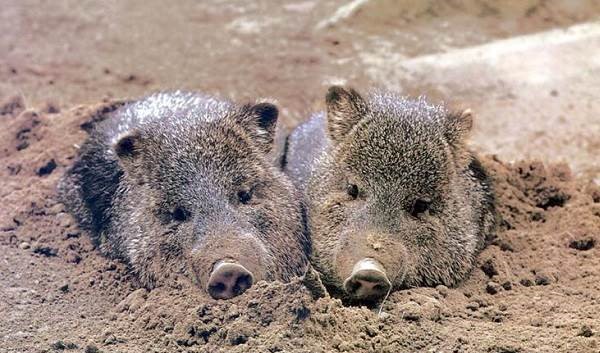 Today for the scientist wild pigs bakers of such types are known:

These are the only bakers living in the USA. Uniqueness of a look that on sacral part to a back of adult animals special glands of additional secretion are located.

Osheynikovy pigs live in herds till 5-15 of individuals, very much sotsialna, are closely interconnected with each other and amicable. Possess white or yellow «collar» in a color thanks to which received the name.

Very much like to eat, preferring to regale on mushrooms, berries, bulbs, escapes of siliculose haricot and, strangely enough, cactuses. However, are omnivorous and will never pass by drop – corpses of frogs or snakes, the decaying carcasses of larger animals or a nest with eggs. Grow to a half a meter in withers and to meter in length, with a weight on average, in 20-25 kg. 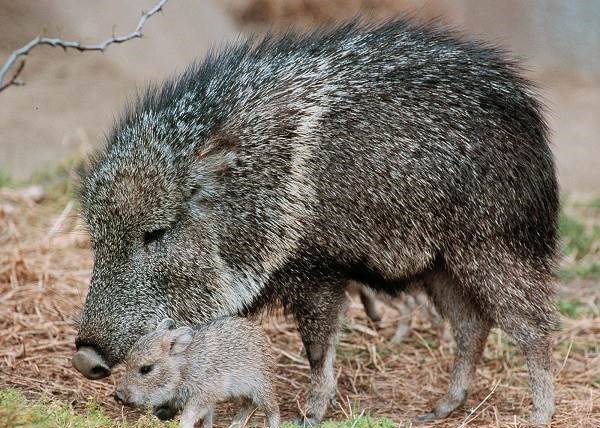 On a photo pig bakers osheynikovy

There live in the basic in Mexico, large, strong animals organized in herds to one hundred heads. The name was received because of a bright light spot under the lower jaw.

Herds constantly wander, without being late more long than for three days even in the most suitable for them places. It is connected with that white-bearded bakers though are omnivorous, but prefer to feed on drop in search of which are. 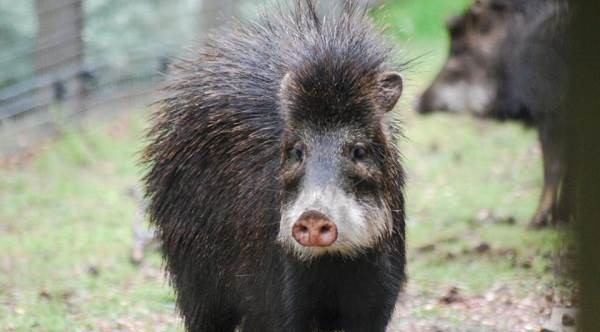 On a photo white-bearded pig bakers

These animals are included in the Red List. Long being considered died out, they were described by biologists on the fossils found in Western Europe. Also were again found live in 1975 when laying a power line in Paraguay.

The look is difficult for supervision and studying as a place of its dwelling are the woods of Gran Chaco, that is the wild virgin territory affecting three states – Brazil, Bolivia, Paraguay.

The main supervision over these bakers are conducted in places with the semi-droughty wood and forest-steppes, and, at the moment, zoologists authentically defined only that these animals like to eat prickles and are very timid, preferring to hide behind boulders or in other shelters as soon as notice for themselves supervision. 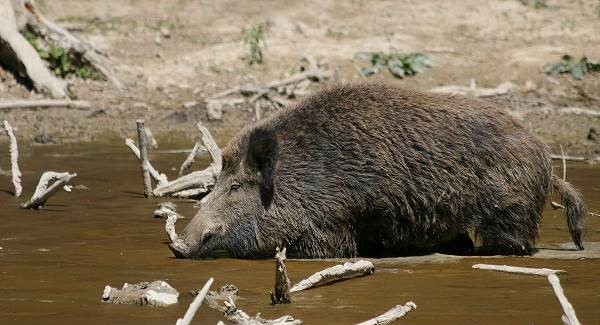 On a photo pig bakers the Czech

This look isn’t studied at all. It was rediscovered incidentally in 2000, at intensive cutting down of a selva in Brazil. Similar on huge bakers of a fossil were often dug out in Europe, but whether are those remains and incidentally found animals the same look, it isn’t known yet.

Character and way of life bakers

Generally all data on these animals, such as characteristic, description of a wild pig bakers, are received from supervision over life the osheynikovykh of pigs in reserves in the territory of the United States.

Bakers prefer evening and a nocturnalism, perfectly hear and have strongly developed sense of smell. Very much sotsialna, live herds, at what with very strict hierarchy. 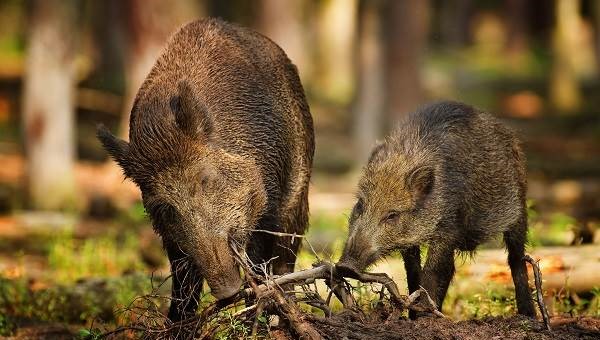 Domination of the leader isn’t challenged, as well as his exclusive right to fertilization of females. If any of males decides to call qualities of the leader of herd into question, no fight or duels happens. The doubting male simply on simply leaves and collects own herd.

As for character, bakers long time were considered as timid animals. However, in the middle of the twentieth century there was a fashion wave on the contents as domestic pets of wild animals.

And than the favourite was more unusual, it was better for those. This hobby destroyed the myth about fearfulness bakers, having allowed to claim that these wild pigs are very sociable, peaceful and extremely curious. 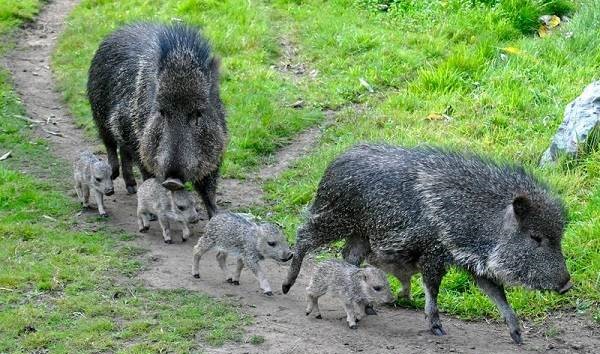 Today these animals can be met in many zoos where they perfectly feel and are if not stars, favourites of visitors. Besides, bakers are in several Canadian circuses in which training and numbers are based by the principle of «chapiteau».

Bakers have no certain time for pairing. Sexual contacts between females and the leader of herd happen almost as well as at people – at any time.

If the female becomes pregnant, her delicate situation lasts from 145 to 150 days. Prefers to give birth bakers in a secluded place or in a hole, but, surely alone.

Couple of pigs is born usually, very seldom it is more. Kids get on feet already on second day of the life, and as soon as it occurs, come back together with mother to other relatives.

There live bakers differently, under favorable conditions – absence of natural enemies, sufficiency of food and good health – till 25 years. However, not so long ago in a Thai zoo the boar bakers celebrated the thirtieth anniversary, thus being in a good physical form. 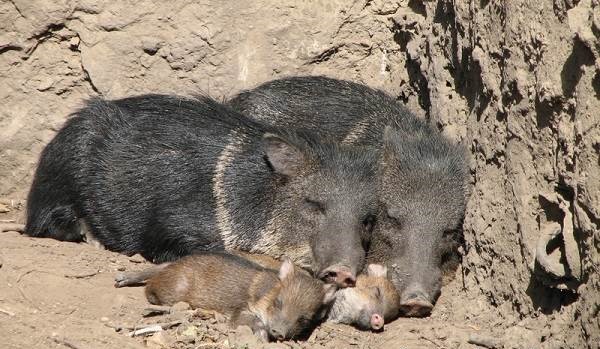 On a photo of a pig bakers with cubs

According to supervision of zoologists and naturalists, a pig the baker in South America seldom lives till 20 years, perishing on average at 15-17. Whether it is connected in a version or with some other reasons, scientists didn’t find out yet.

Bakers very much like to eat, watching them, it is possible to notice that they constantly chew something, and often, and have a bite in the course of migration, under way, just as people. These animals are omnivorous – can pinch from time to time a grass, eat around escapes of haricot, regale on mushrooms or, banish Egyptian vultures and eat carcass of the lost animal.

Such variety of culinary preferences is caused by a structure of their stomachs and teeth. the stomach of a wild pig bakers has three departments, very first of which in addition the nature equipped with couple of «blind» bags.

And in a mouth at each animal – 38 teeth, with well developed back, fraying food and with the most powerful trihedral canines in front, completely same, as well as at any predator. 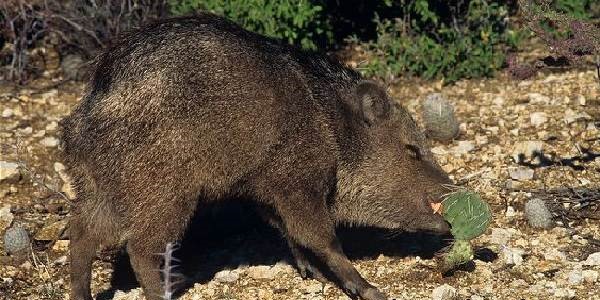 Many biologists consider that once bakers not only were content with drop and a pasture, but also hunted. Now, canines are used only for protection against natural enemies – pumas and jaguars, and for a breaking of a flesh of large drop.

Summarizing the story about these, unfamiliar to the person, surprising animals, it is necessary to mention name history — pigs bakers why they were called so not less interestingly, than they.

When European pioneers developed the American continent, they faced rather contact and friendly Indian tribe «be in a stupor», whose descendants still live in modern Brazil 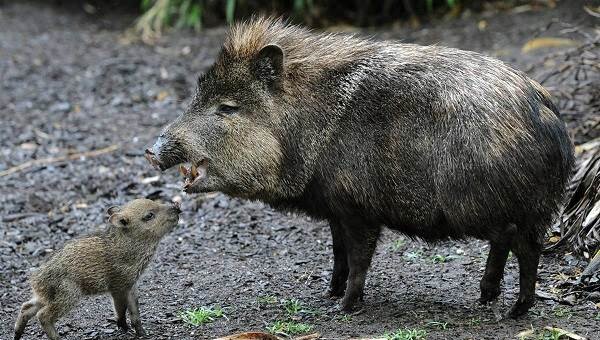 Having seen in the distance group of unusual animals, Portuguese began to show on them, shouting «Pigs, wild pigs», and Indians picked up the word sounding for ears of Europeans as «Bakers».

Later some time, it became known that «bakers» — it was not one word, and a little and this phrase as «the animal making many forest tracks» is translated that surprisingly beautifully and precisely describes pigs bakers.