The most incredible birds live on our planet. They, and all colors of the rainbow, and solid. Fluffy or no feathers. Huge eagles and miniature Canaries. Chickens, ducks, owls, eagle owls, turkeys, peacocks and parrots.

What do we know about the rare, Red-listed birds? Nothing. Some of the representatives of this book – the Pink flamingos. It is so ancient birds, it was possible to assume that they saw dinosaurs. After all, the very first, ancient fossilized skeleton flamingos, more than forty-five million years!

Description and features of Flamingo

Bird Flamingo, a resident African and southern Asian continent, some of the territorial parts of southern Europe. And even in St.-Petersburg and Dagestan, they have been seen. Pink flamingos is one of the largest representatives of their kind. The rest of them: Common and Red Flamingo. Andean and Chilean flamingos. Small and flamingos James. 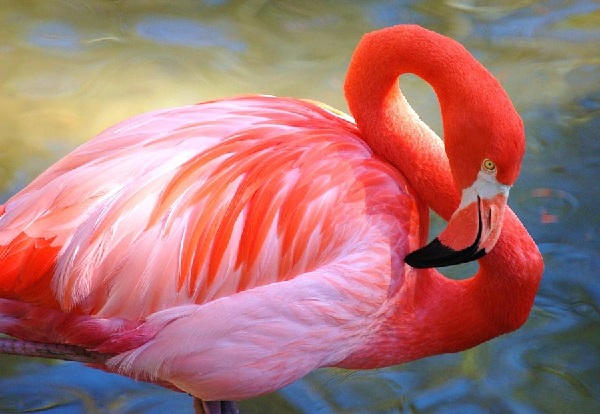 The smallest species of Flamingo, is Small. It grows not even a meter tall, and have an adult bird weighs only two kilograms. Pink adult Flamingo weigh four or five pounds.

And the growth of flamingos, half meter. In fact, they have the longest neck and legs when compared with families of cranes and aplevich. Well, as always it happens in nature, especially males, of course, larger and more beautiful females.

The Flamingo color of different shades, from dirty white, gray to rich coral, purple. And their color depends on what they eat. After all eat some algae, paint their feathers in a sophisticated shade of pink.

And the greater flamingos eat the most algae, the brighter it color. And the tips of the wings black. But it can be seen only when the bird is in flight. After all, there is no more beautiful sight than a flock of flying Pink flamingos.

Head Flamingo small size, but it is a huge bill. The edges of which, provided with very small teeth partitions. The upper part of the beak is curved, like the knee, to the bottom of pointed. 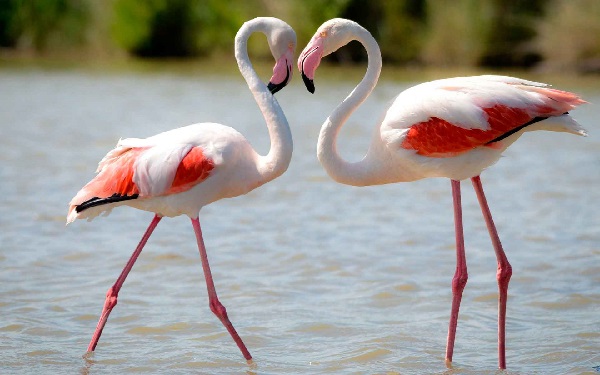 And she is the only movable part opposed to the bottom. The base of the beak and half light, the end of a dark, almost black. Neck, longer and thinner than the Swan, so the bird gets tired quickly to keep it straight, and often throws back, to relax the muscles. On the chin and around the eyes, Flamingo, and no feathers. The plumage of all birds frail. And tails they are very short.

The wingspan of an adult Flamingo, one and a half meters. Interestingly, Vilena, the bird completely loses the feathers on the wings, and all at once. And for a whole month, until it again will not fledge, becomes vulnerable, vulnerable to predators. As it loses the ability to fly.

The legs of the pink flamingos, thin and long. In the event of an escape, to take off, they need another five meters to run along the shallow shore. Then off with it, often waving his wings.

And already in the air, holding his neck, smoothly extended, in the forward direction. Feet too on a journey that will not bend. Like a pack of pink crosses flying across the sky. 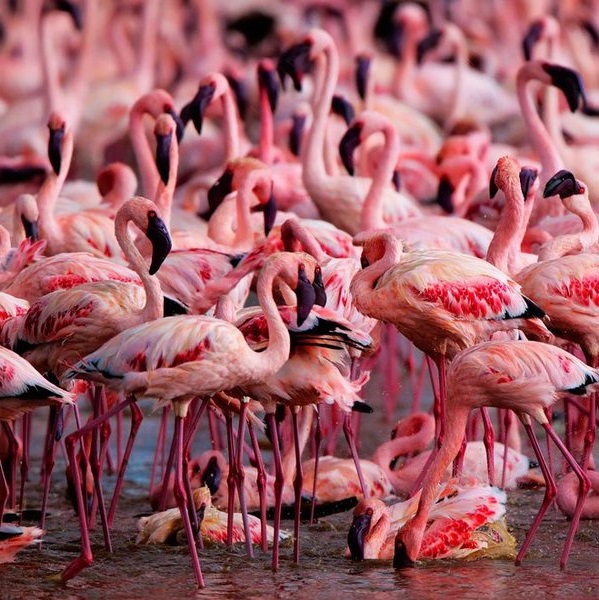 Yet, seen in the photo Flamingo, they always stand on one leg. And it’s not just. Them a long time to be in the water, which is not always warm. Therefore, in order not to SuperCool its body, the Flamingo, and then change one or the other leg.

Front toes are long, have a membrane like waterfowl. And the rear finger as a small otherstock is on the leg, above the front. Or some even missing.

The character and the lifestyle of flamingos

Birds, flamingos live in large flocks consisting of several hundred thousand birds. They live on the peaceful banks of rivers and ponds. Those birds are all migratory.

Because one of them lives in the southern territories, and fly to wintering them why not. Well, residents of the Northern regions, of course, with the arrival of cold weather, looking for a place to dwell a little warmer. 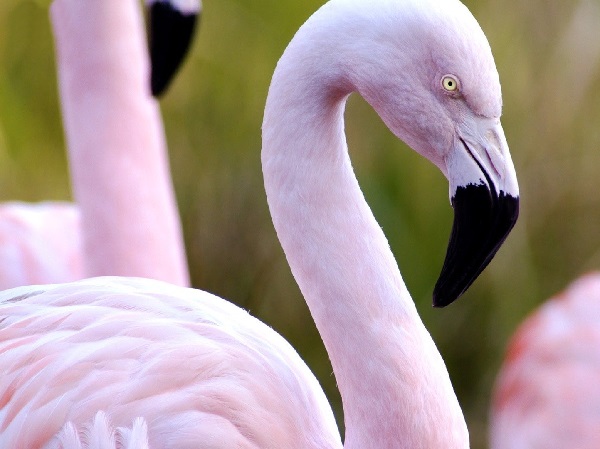 Ponds for living birds choose not deep water, and only salt water. Fish, Flamingo, is almost not interested. They need a large number of crustaceans and algae, which are painted birds. And because they choose such lake, and lake the shoreline is also painted in pink color.

The skin on the legs is so versatile that salt in the water, it does not damage. And to drink, birds flying in presnovodnye, or lick the rainwater from their feathers, after the rainfall.

The reproduction and lifespan of flamingos

Puberty occurs in birds to four years of life. And that’s when their feathers begin to take on pink undertones. Mate birds at different times of the year. But they prefer warm summer days. Then feed more, and the climate for posterity Flamingo better.

It all starts with flirting males with a female. He’s been circling this lady’s heart, raising and lowering the head, flapping its long wings, and as if pinching her beak. When the mate reciprocates his feelings, she fully begins for a man to repeat his movements.

It looks like a very beautiful dance. If the pair is selected, one time and the rest of your life. After all, birds are very loyal to each other. They are a bit away from the pack to mate. 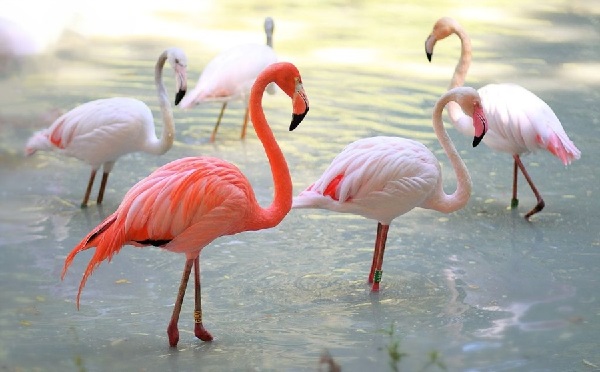 After the male started to build a home for future offspring. He builds only on the water that no predator got to helpless children. The composition of the future home, it is the clay connection, twigs, feathers.

And the structure must be elevated above the water. The slot looks like a square hill in the middle with vyemki for eggs. The female lays one, rarely two eggs, plain white.

And together with his companion they start hatching. When one person sits in the nest, the other one eats, restores power. On the nest, flamingos sitting, bending them at the knees. And only uperevshis on the beak, they can climb.

A month later, appear snowy white, fluffy snowflakes as kids. Interestingly, because flamingos live in large families, and Jack they are close next to each other. Every parent finds out their child at the squeak.

In fact, while still in the shell, Chicks are making sounds. Flamingo has decided not to feed other people’s children, like cuckoos. Therefore, if parents do not be to happen, the little birdy will die of hunger. 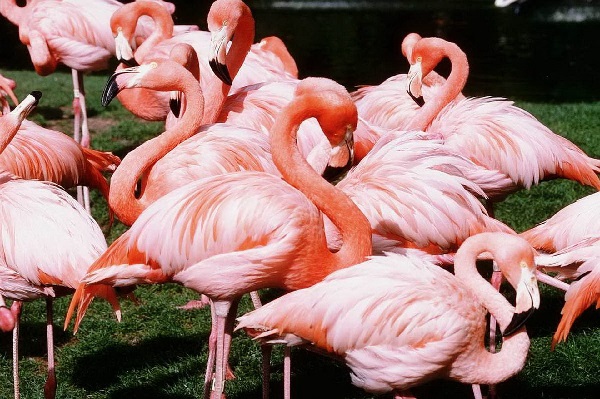 The first week, the offspring are fed excretory secretion, pink color, the composition is very similar to the milk of animals and men, too. And so, after seven or eight days, the Chicks jump from their hiding places to pop on the water, and something to make money. A fly and a full, eat by themselves, they will be able to learn only after three months of his life.

In the wild, flamingos live thirty or forty years. In zoos and reserves much longer. In one of the protected areas, there is Flamingo Stroitel, he already went to the eighth decade.

Birds flamingos live in large, close-knit flocks. But when it comes to feeding flamingos, they are beginning zealously to divide the territory, who would not let anyone, yourself selected the place of catch. 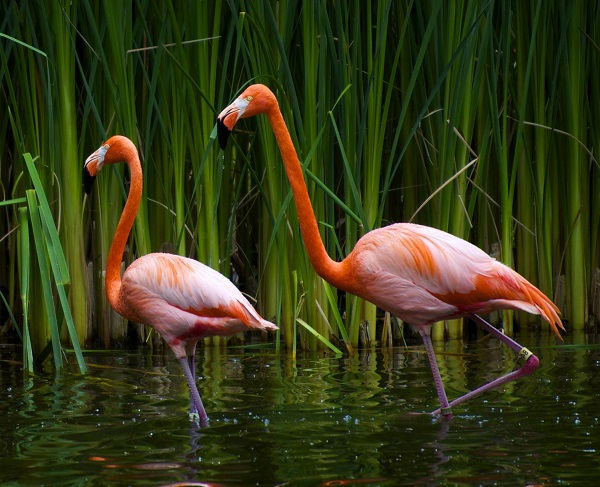 Start to search for food, raking his webbed fingers mud bottom. Then I drop down the head and turn it so that the beak is sharp end to the top.

And opening it, swallow everything with water. Then closing his beak, and the edge of it, as we already know, jagged. Produces completely all water from the cylindrical beak. Well, what was left, swallowing. Whether it’s a crustacean, or fish, or tadpole, or component of the bottom.

We must not forget that pink flamingos listed in the Red book of Russia. Though the population of flamingos and is not on the verge of extinction, with great solicitude to treat the propagation of their species.

Many birds are killed by wild animals, foxes and badgers. From birds of prey, ravaging the nests, that the gulls and vultures. During the flight, accidentally sat down to rest on electric wires.

A lot of rivers and lakes have dried up, which was inhabited by these birds. And even though they are old the inhabitants of the earth, all people are biased. And settle in very remote places. 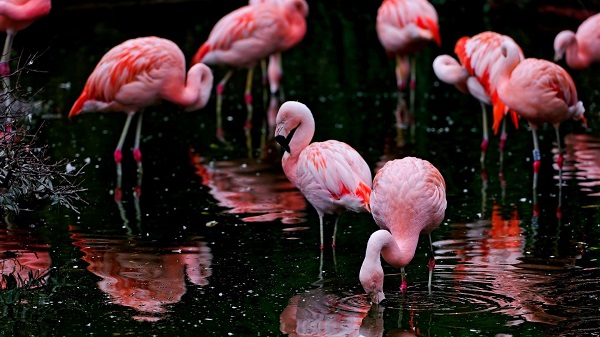 Because people are the worst enemies. Instead of having to save, we destroy such beautiful creatures. Eating their meat and eggs. Using for decorations for their fancy feathers.

And little did the fattening of the rich who, at any cost, want to get to the farm, such a strange bird, nothing about her not knowing. As a result, the Flamingo foolish die.