Piranha vulgaris refers to the species of predatory ray-finned fish. For the first time about it became known in the middle of the XIX century. In nature, there are about 30 species of these fish, 4 of which can pose a potential threat to humans.

The length of an adult individual varies from 20 to 30 cm. However, there were cases when, according to the description of eyewitnesses, piranha reached a length of 80 cm. It was the largest representative of its kind. The color of females and males is different. In nature there are piranha males of blue-black or green color, with a silver tint. Females of this species of fish have scales of a purple shade. 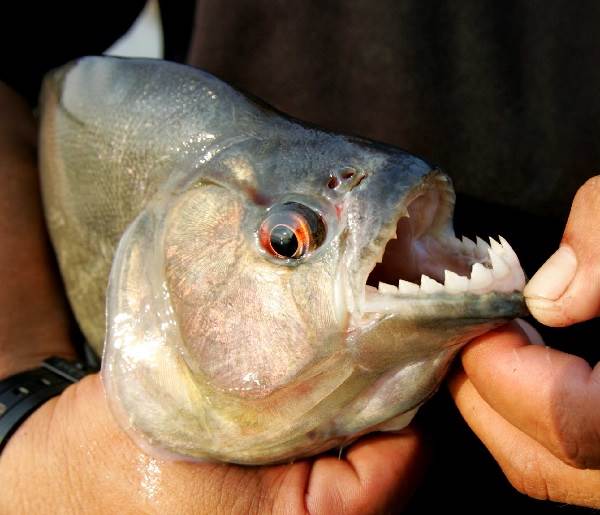 Scientists refer to piranha and pacu as members of the “serrated salmon” family, which are distinguished by the presence of a serrated keel. In the rest, especially in the diet and the structure of the jaw, fish are very different.

Features and habitat of piranha

You can meet piranha in the waters of South America: in Venezuela, Brazil, Bolivia, Argentina, Colombia, Ecuador. Amazon, Orinoco, Paraná are the most popular river places where piranhas inhabit. 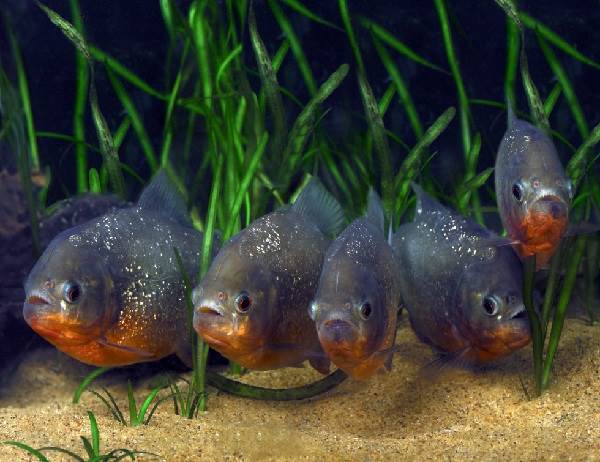 They love fresh warm water, rich in oxygen, a calm current and an abundance of vegetation. Sometimes they can be found in seawater. During this period, females are not capable of spawning. Several species of fish can coexist on the same territory.

The nature and lifestyle of piranha fish

There are many myths about piranha fish. Piranhas are called killer fish and monsters due to their aggressiveness. The “lively” nature of fish can be seen by observing how they behave in a flock.

Often you can see that the fish have no fin, or there are scars on the body. Piranhas can attack not only the representatives of another species of the animal world, but also their «brothers». There are even cases of cannibalism. In general, piranhas choose rivers where a lot of fish swim, because food for them is the most important thing in life. 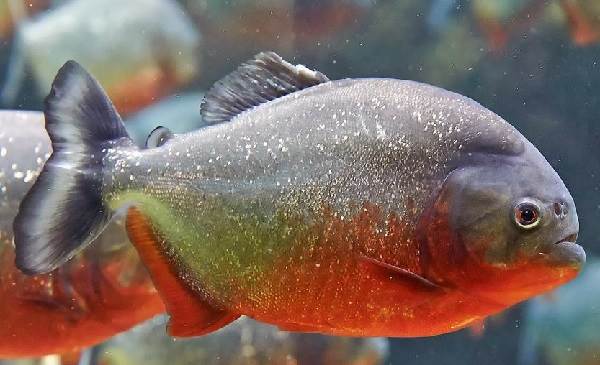 Piranhas mostly swim in small groups of 25-30 individuals. Some flocks can reach about a thousand representatives of this species. Herd inherent in them not at the expense of the desire to kill. On the contrary, it is a defense mechanism, because in nature there are animals for which piranhas are food. For example, caimans, some species of turtles, snakes, birds.

The diet of piranhas is extremely diverse. It includes:

Piranhas are predatory fish that hunt more often in the evening and at night, as well as at dawn. There are fish that piranhas do not eat. For example, South American catfish. This fish helps to get rid of piranhas from parasites.

Fish aggression increases due to spawning. In the rainy season — the end of January — the best time to continue the race. Before the start of breeding, the males pitted at the bottom, blowing out the silt. In such a «shelter» can be put about a thousand eggs. 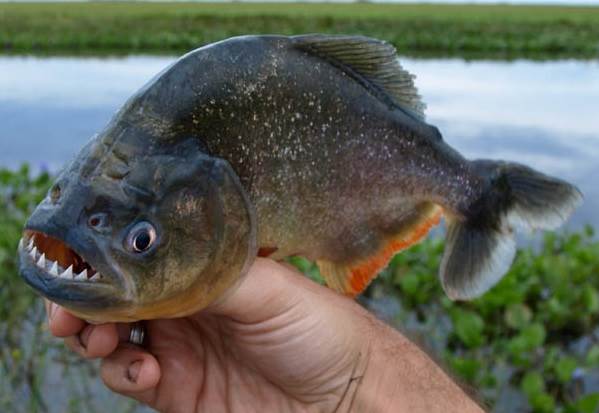 Males protect the offspring, provide them with oxygen through heavy movements. Sometimes, to save offspring, the eggs are attached to the leaves or stalks of algae. Larvae appear after 40 hours.

Until that time, they eat stocks of the gall sac. As soon as the fry can get their own food, the parents no longer take care of them. An adult piranha is considered mature when it grows to 15-18 cm. Piranhas are tender, caring parents. Older individuals are quiet. They do not attack the victim, but prefer to sit out in the algae or behind the snag. 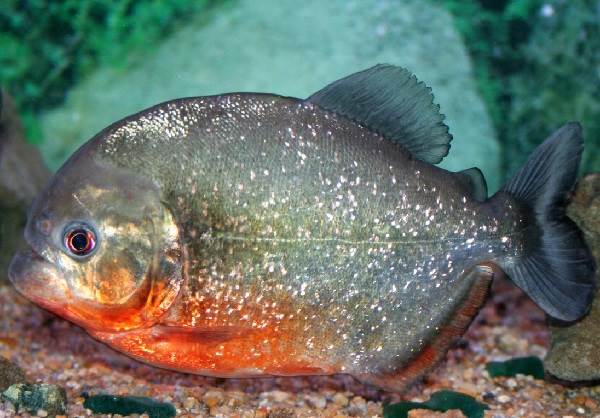 Despite the opinion that piranhas are killer fish, it must be said that they may experience shock from fright. If the fish is frightened, it can “faint”: the scales of the individual turn pale, and the piranha sideways sinks to the bottom. But after she wakes up, the piranha rushes to protect herself.

Piranha fish are dangerous to humans. There are no cases of human eating, but the bites of these fish can be severely affected. Piranha fish bite is painful, wounds become inflamed for a long time and do not heal. Approximately 70 people a year are bitten by piranhas. 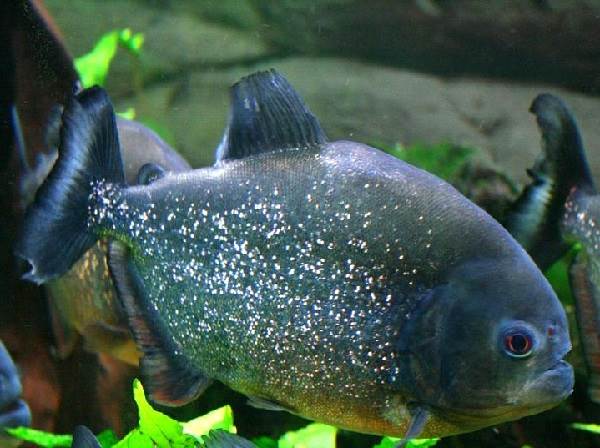 Piranha is a predatory fish. Her jaws are the greatest danger. Scientists conducted an experiment. From the Amazon caught a few dozen individuals. In the aquarium, where they were, alternately lowered dynamometers.

As a result, it turned out that a fish bite can reach three hundred and twenty newtons. It turned out that piranhas have the most powerful jaws of all the present representatives of the fauna. Numerous photos of piranha fish demonstrate the degree of danger from meeting with this predator.

Those who want to keep piranha at home should know some of the nuances of nutrition.

1. The most important thing is to give food in doses. It may seem that the fish are hungry. In fact, it is not. The piranhas have a constant desire to eat.
2. The water in the aquarium should be clean, so you need to remove leftovers after each feeding. From pollution fish can get sick.
3. 2 minutes is the optimal time for individuals to eat.
4. In order for piranhas to be healthy and feel good they need to diversify the diet as much as possible. It is useful to feed the fish with shrimp, tadpoles, frozen fish fillets, finely chopped beef meat.
5. There is a product that you should not give to your pets — freshwater fish. In general, feeding the piranhas with one meat is impossible.
6. Young individuals can be fed with bloodworms, tubers, worms, and then gradually transferred to an adult diet.

Reproduction and life expectancy of piranha

During the breeding season, the female turns upside down. About 3000 eggs can be born at a time. The average size of one egg is one and a half millimeters. If breeding occurs in an aquarium, you need to remember that in the first days after the birth of the offspring, the fish are very aggressive, so you should not run your hands in the aquarium or try to touch the fish. 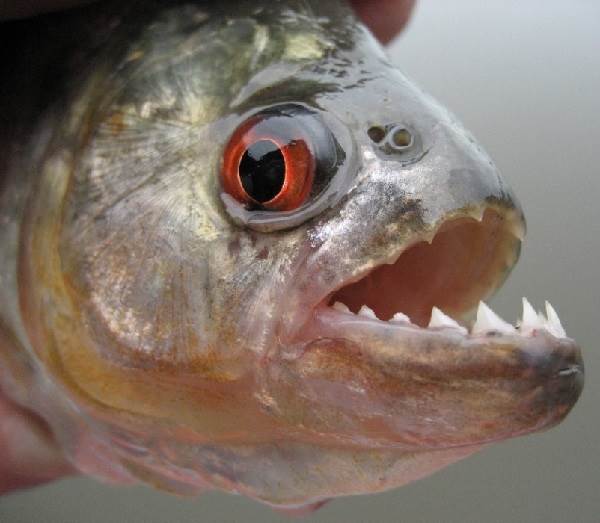 Parents need to replant from offspring. For this it is better to use a net with a long handle. Their living conditions should be similar. If there is a desire to breed piranhas at home, for this it is worth buying a spawning. For one pair of manufacturers need about 200 liters of water. Water should be warm — 26-28 degrees.

In such a period, instead of pebbles, it is better to fill in the soil and remove all the plants. On the eve of spawning fish recommended to strengthen feed. Professional aquarists are engaged in the reproduction of piranhas with the help of special hormonal preparations. Piranha can live up to 10 years in domestic conditions.