Pitohui saturated with poison. They are filled with the skin and wings of birds from the order of passer-shaped. Family of birds — Australian whistlers. The name of the family alludes to the habitat of the eater. The bird is not found in Australia itself, but in the forests of New Guinea. It is separated from the mainland by the Torres Straits. 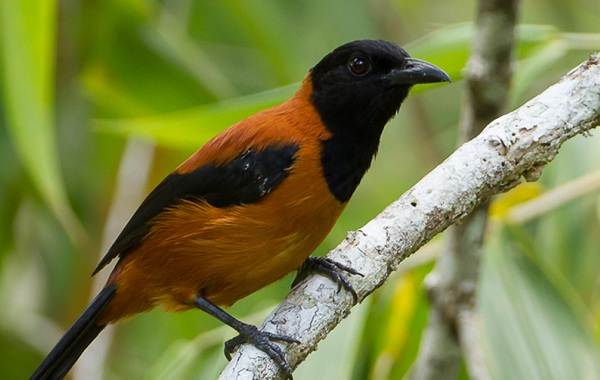 The feathery is otherwise called the thrush flycatcher. The length of the bird is 23 centimeters. Painted animal in black, red-orange, brown. Different types of pitochu colors are combined in different ways, differ in saturation.

At home, the poisonous Pitohui bird was considered weed because it was not suitable for meals. Since ancient times, the population of New Guinea has noticed the strange taste of feathered skin. For centuries, Europeans have been convinced that there are no poisonous birds among them. The toxin pito has been discovered in 1992. This was a scientific breakthrough. Later, in the same New Guinea, 2 more venomous birds were found — a shrike flycatcher and a blue-headed efrita Kovaldi. 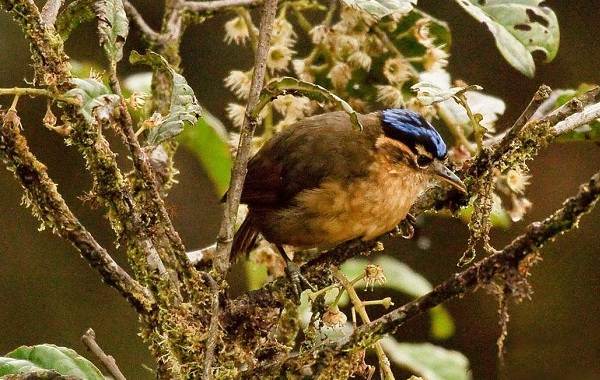 The poisonous blue-headed bird ifrit kovaldi settles together with Pitohui

The Toxin Powder is described by Jack Dame-Baker. An employee of the University of Chicago studied the so-called birds of paradise. Pito was not included in their number, but was entangled in the grid-trap. Jack freed the feathered by scratching his finger.

The scientist licked the wound and felt the numbness of the tongue. Dame-Baker could not explain what happened. However, by the will of fate, the ornithologist re-encountered the thrush flycatcher, again feeling discomfort. Then there were guesses about the poisonousness of the bird. Poison pitoh — gobatrachotoksin.

The same produces a frog listolaz that lives in South America. There, the Indians used the amphibian toxin for centuries, poisoning them with arrowheads. Toxin listolaz receives, processing the eaten insects, in particular, ants. Frogs held in captivity and feeding differently are not poisonous. 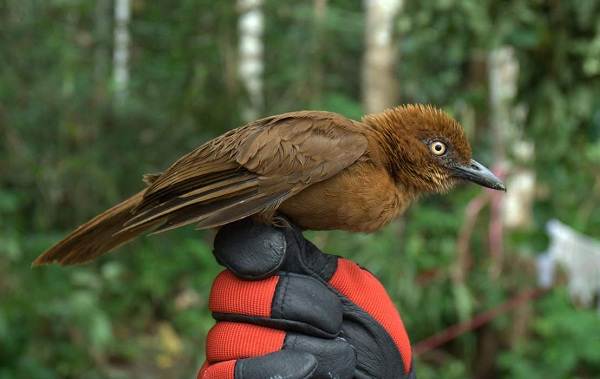 In the photo thrush flycatcher or Pitohui

The same can be said about pitokh. In birds, the level of toxicity varies depending on the habitat. The most venomous birds are found in areas of the cluster of beetles choresine melyrid. Feathers are eaten by these insects. In beetles there is batratotoksin. He is 100 times stronger than strychnine.

Due to the batrachotoxin, the meat pitokha when cooking smells unpleasant. It tastes bitter. Therefore, the natives of New Guinea do not like jelly, although they have learned to cook it, avoiding poisoning.

The birds themselves in the process of evolution also developed resistance to their poison, which is not true of lice. Parasitizing on other birds, they do not touch the pitoch. Their toxin can also protect against predators. The stock of the poison of one bird kills 800 mice, which means it can kill large carnivorous animals. 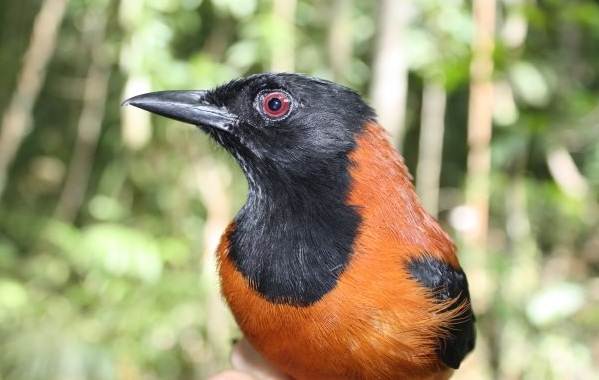 In a 60-gram body of pito chick about 30 milligrams of batrachotoxin, including in feathers. Interestingly, the beetle, from which the birds get the toxin, is painted in the same black and orange colors as the powder itself.

Pitfall 6 species, however, only 3 of them are poisonous. Two of them accumulate toxin of average strength. People only sneeze from it, itch, can swell. In the third pito, poison can kill a person. It’s about dishorous, that is, a two-color form. Its representatives are painted in black and orange. Their saturation and contrast is a signal of the venomousness of the animal. In addition to the two-color, in the forests of New Guinea are found:

1. Rusty Pitohui. Its Latin name is rusty. The name of the feathered is associated with coloring. It is like a rusted iron. Brownish red feathers cover the whole body of pito. It is larger than the other members of the family, reaching a length of 28 centimeters. The species has several subtypes. One of them with the Latin name fuscus has a whitish beak, and the others have a black one. All members of the species are poisonous.

2. Crested Pitohui. It is also poisonous. In the photo, the pito is similar to two-colored. The difference is a tuft of black feathers on the head. 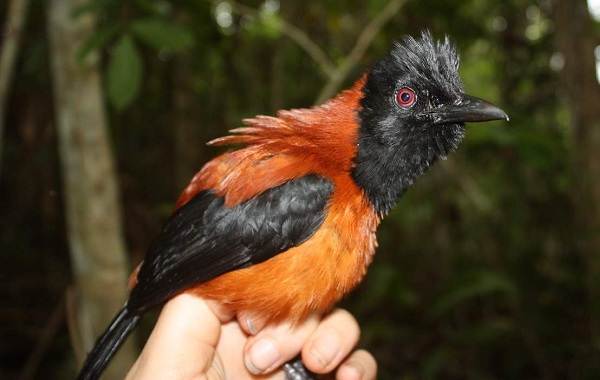 Crested pitohui is easily recognizable by its characteristic tuft

3. Changeable Pitohui. It, unlike the majority of relatives, is completely painted in black, does not have bright inserts. The Latin name of the species is kirhosephalus.

4. Piedcereous Pitohui. Latin is called insertus. The name is due to the combination of feathers of several colors on the poultry breast. It is medium in size, about 25 centimeters in length.

5. Black Pitohui. It is easy to confuse it with a changeable one, but the black plumage color is more saturated, it is cast in metal. In 6 species of thrush flycatchers, 20 subtypes. All of them — the inhabitants of New Guinea. Where exactly on her lands to search for pito?

Most of the pitokha settle in the forests of the central highlands of Guinea, at altitudes of 800-1700 meters above sea level. Birds climb into the wilds of the tropics. Therefore, thrush flycatchers for so long were unknown to Europeans. They simply did not climb to where the birds live. However, non-poisonous species are found on the fringes and in the underbrush. 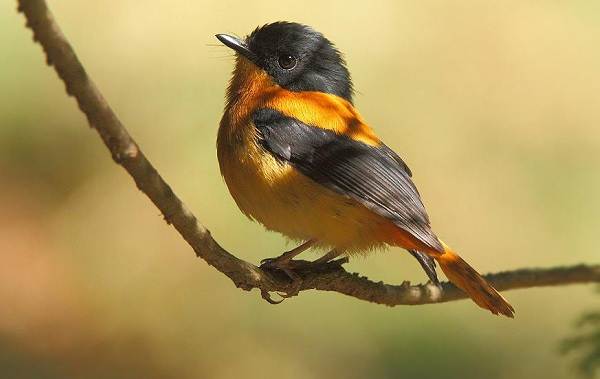 If there is pito nearby, it’s easy to spot a bird. It’s not just a bright color, but also noise. Birds fearlessly make flights from branch to branch, gulden. The behavior is justified by the lack of desire to attack the thrush flycatchers of both humans and forest predators. For this reason, the population of the epoch in New Guinea is increasing. The rarity of the species on the scale of the planet is due only to the fact that no birds are found outside the islands.

Where Pitohui lives, there are many insects all year round. The strong and pointed beak of the bird is adapted to catch them both on the fly and on the ground, trees. In addition to flies and beetles, they feed on the eater: caterpillars of ants, small frogs, worms, larvae, lizards, mice, butterflies. About 15% in the diet of pith energy are fruits and berries of the forests of New Guinea. Adult birds feed on plant food. In the period of growing up, the diet is 100% protein. On it the youngsters gain weight faster. 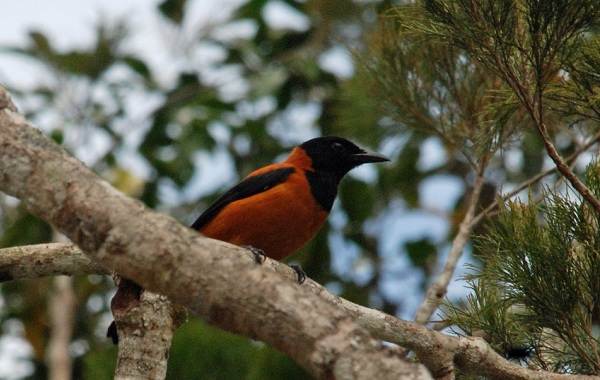 Pitochu make the cup-shaped nests of the branches in the trees. Sometimes birds have houses in the crevices of the rocks. In the nest, the female lays 1-4 eggs. In a year several clutches are carried out, — the climate allows. Eggs for powdere are white or olive, dotted with dark spots. While the female incubates the offspring for 17 days, the male feeds her.

For another 18 days, both parents bring food to the chicks. After, the offspring flies out of the nest. The rapid development cycle is another reason for the numerous clutches of thrush flycatchers. They live, by the way, as much as usual — 3-7 years. In captivity, feathered can cross this frontier, however, care for the cod is troublesome.